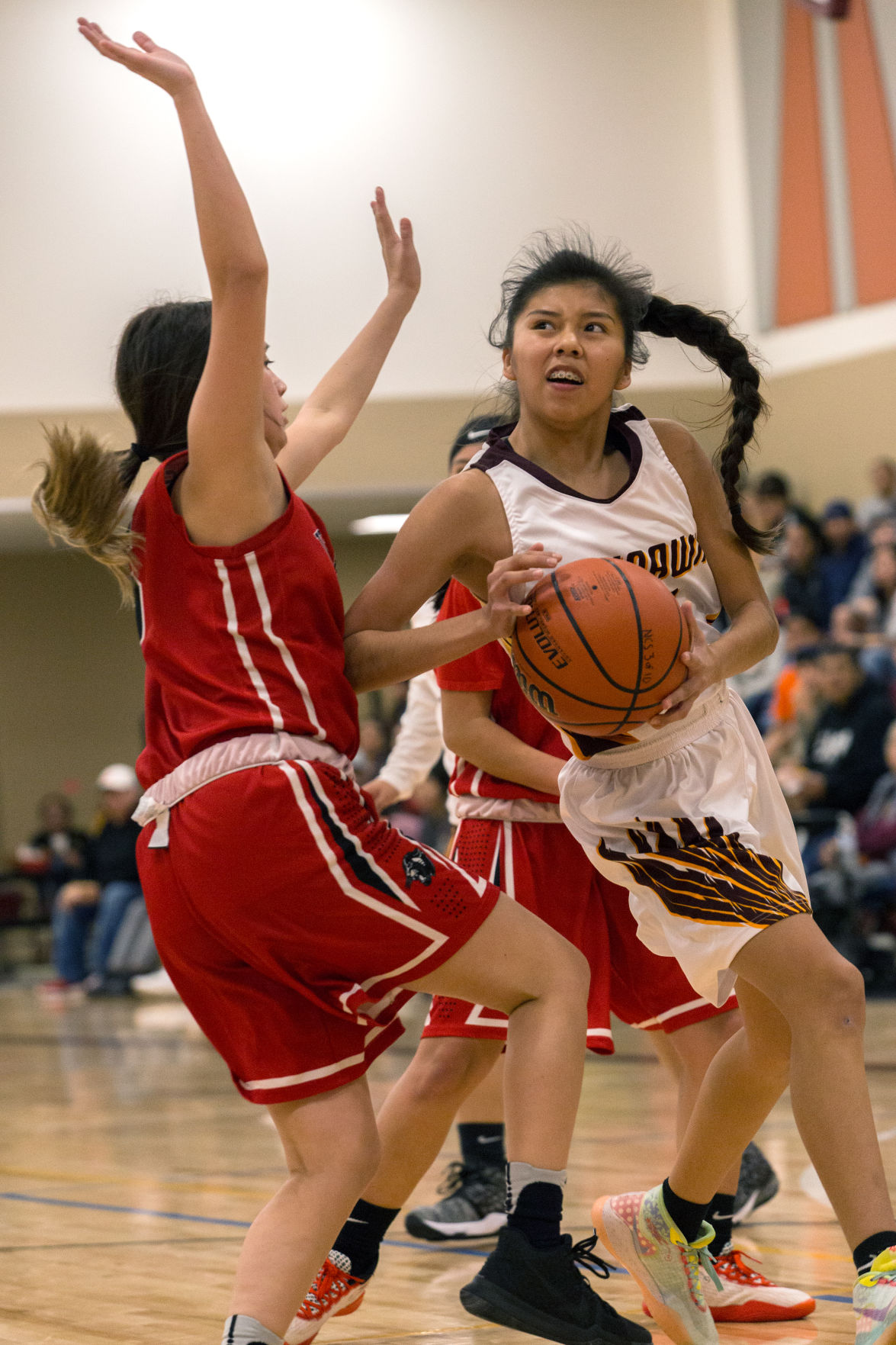 McKenzie Kiona, of Nixyaawii, eyes the basket during Saturday’s game against White Swan at the Nixyaawii Invitational. 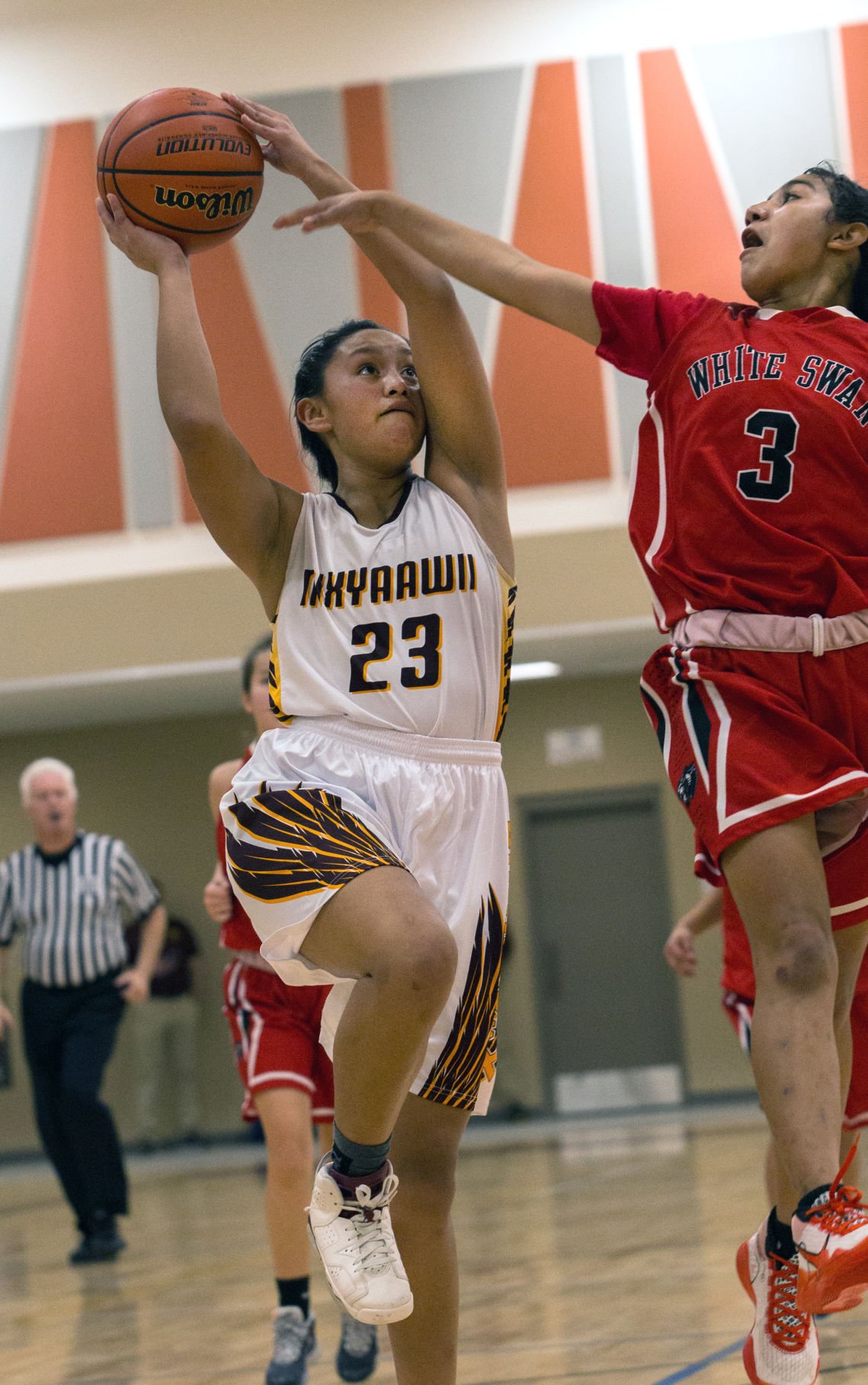 Tyana Van Pelt, of Nixyaawii, goes up for a shot as White Swan’s Melanie Bass (3) defends during Saturday’s Nixyaawii Invitational. 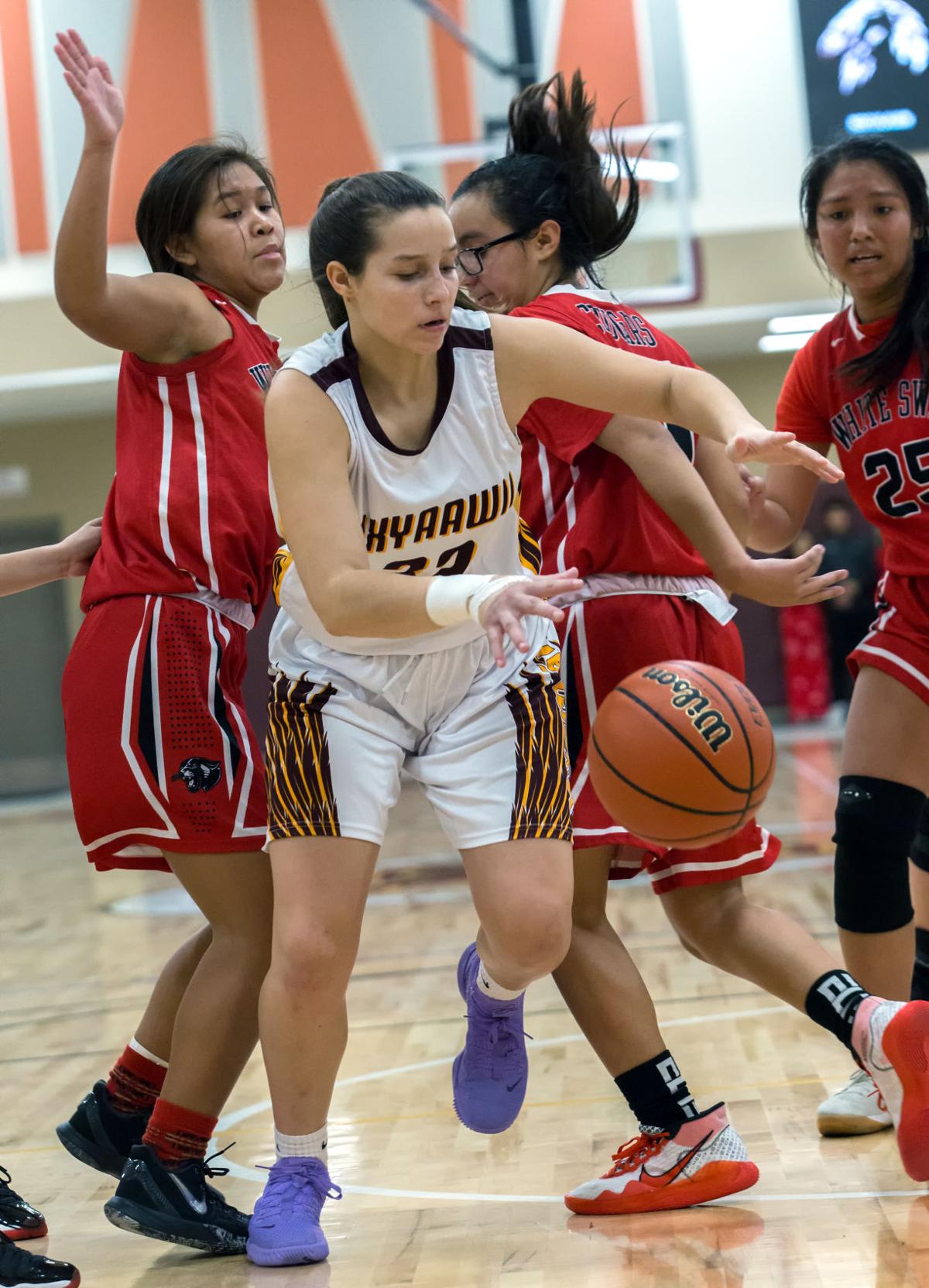 Susie Patrick, of Nixyaawii, goes to the basket during Saturday’s Nixyaawill Invitational game against White Swan.

McKenzie Kiona, of Nixyaawii, eyes the basket during Saturday’s game against White Swan at the Nixyaawii Invitational.

Tyana Van Pelt, of Nixyaawii, goes up for a shot as White Swan’s Melanie Bass (3) defends during Saturday’s Nixyaawii Invitational.

Susie Patrick, of Nixyaawii, goes to the basket during Saturday’s Nixyaawill Invitational game against White Swan.

MISSION — Sophie Bronson is only a freshman, but she is already proving to be one of Nixyaawii’s key offensive powers.

The Golden Eagles’ guard poured in a team-high 15 points and shot 6-of-9 at the line to help Nixyaawii secure a 57-38 win over White Swan on Saturday to close the Nixyaawii Invitational, and to secure their season’s first victory.

The home win followed a 53-45 loss to Lakeside on Friday evening.

“Our hustle plays broke us apart,” Bronson said. “But for our second game, we played really well. We moved the ball up and down the court together. Our team chemistry is really coming along.”

Bronson dug the Golden Eagles out of an early first-quarter deficit with six unanswered points, forcing the Cougars to call a timeout and rethink their game plan. The Cougars would return to claw back with a 12-9 game by the end of the quarter.

Bronson’s 3-pointer at 6:19 in the second quarter gave the Golden Eagles some distance with a 10-point, 19-9 lead. From there, senior guards Susie Patrick and Tyanna Van Pelt sunk back-to-back baskets for a 23-9 advantage.

White Swan’s Melanie Bass, who scored nine of the Cougars’ 10 points in the quarter, posted crucial baskets to help her team cut their deficit to just 11 points at the half. The Golden Eagles, who often rotated five players at a time throughout the game, used their depth to their advantage to withstand the Cougars’ offense.

“They have some shooters,” Nixyaawii head coach Jeremy Maddern said of White Swan, “but we wore ‘em down rotating our 10 kids in. That’s going to be pretty common this year. We’ll use that to our advantage.”

White Swan’s Shayonne Jackson and Rhena Wheeler put up four straight points for a 34-25 game in the latter half of the third quarter. The Golden Eagles responded with a seven-point streak, including three from Bronson at the line.

Junior point guard Kyella Picard managed a basket just before the buzzer to give Nixyaawii a 45-32 lead. She and Bronson combined for six consecutive points in mid-quarter four for a 22-point advantage, keeping the game well out of the Cougars’ reach.

Van Pelt, who finished with 10 points, hit a shot in the final 10 seconds to seal the win.

“White Swan is a really tough team,” Bronson said. “They don’t have much in size, but they can play a pretty good game.”

Senior guard Trista Melton followed Bronson in scoring with 12 points on the night. Bass matched Bronson to lead the Cougars with a team-high 15 points.