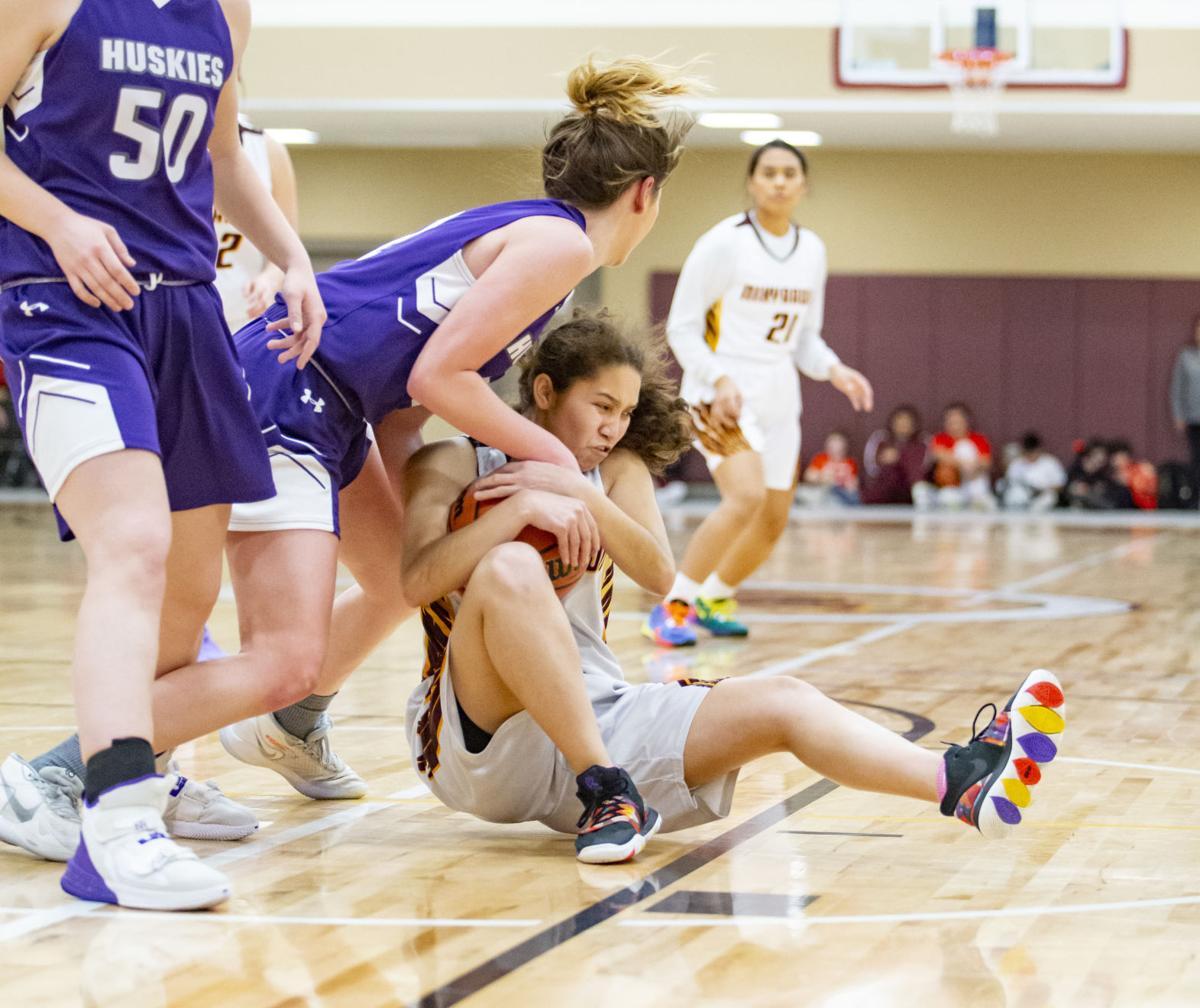 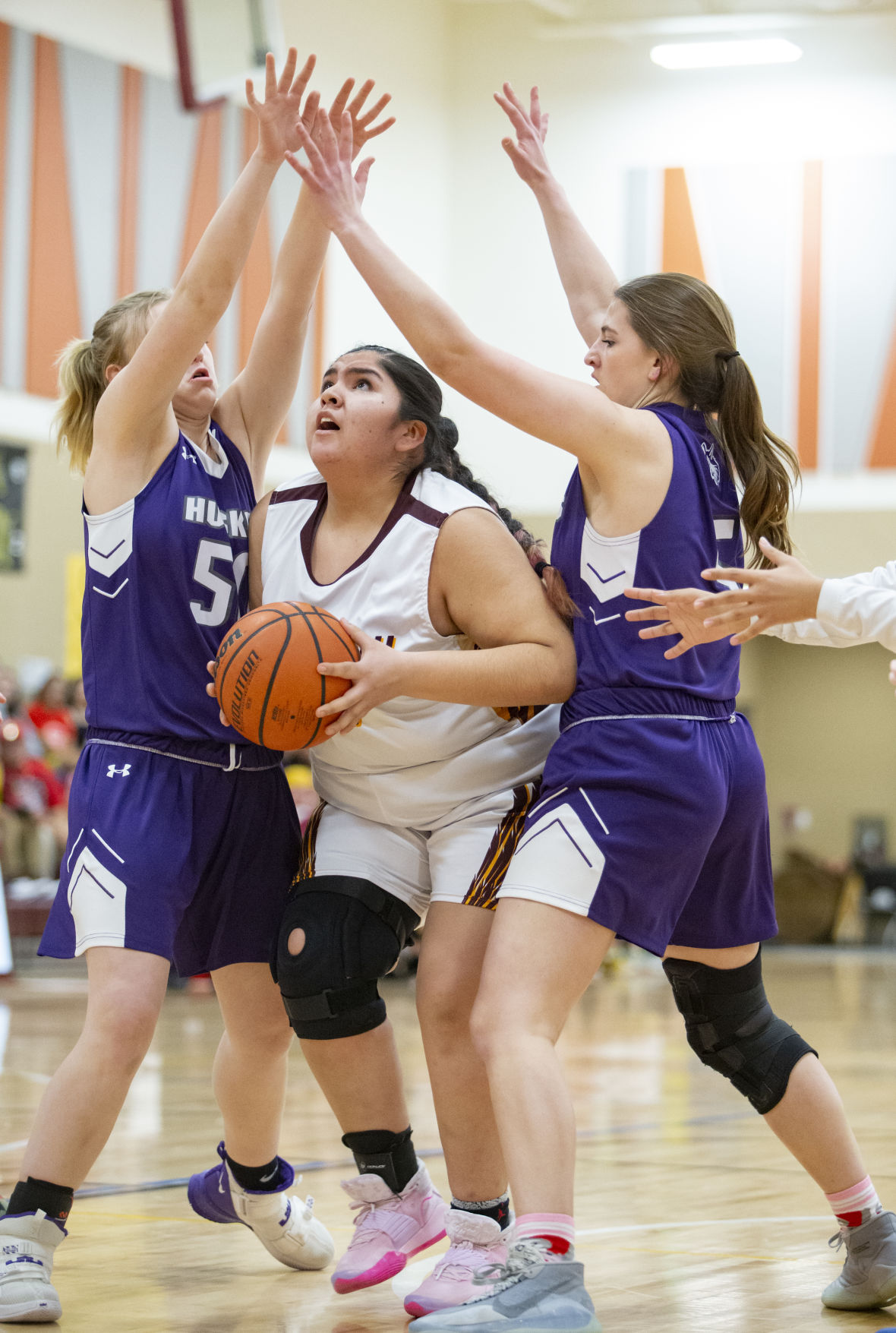 Nixyaawii’s Kylie Mountainchief (34) looks to take a shot during the first half against the Huskies. The Elgin Huskies defeated the Nixyaawii Golden Eagles 53-51 at Nixyaawii Community School on Friday night. 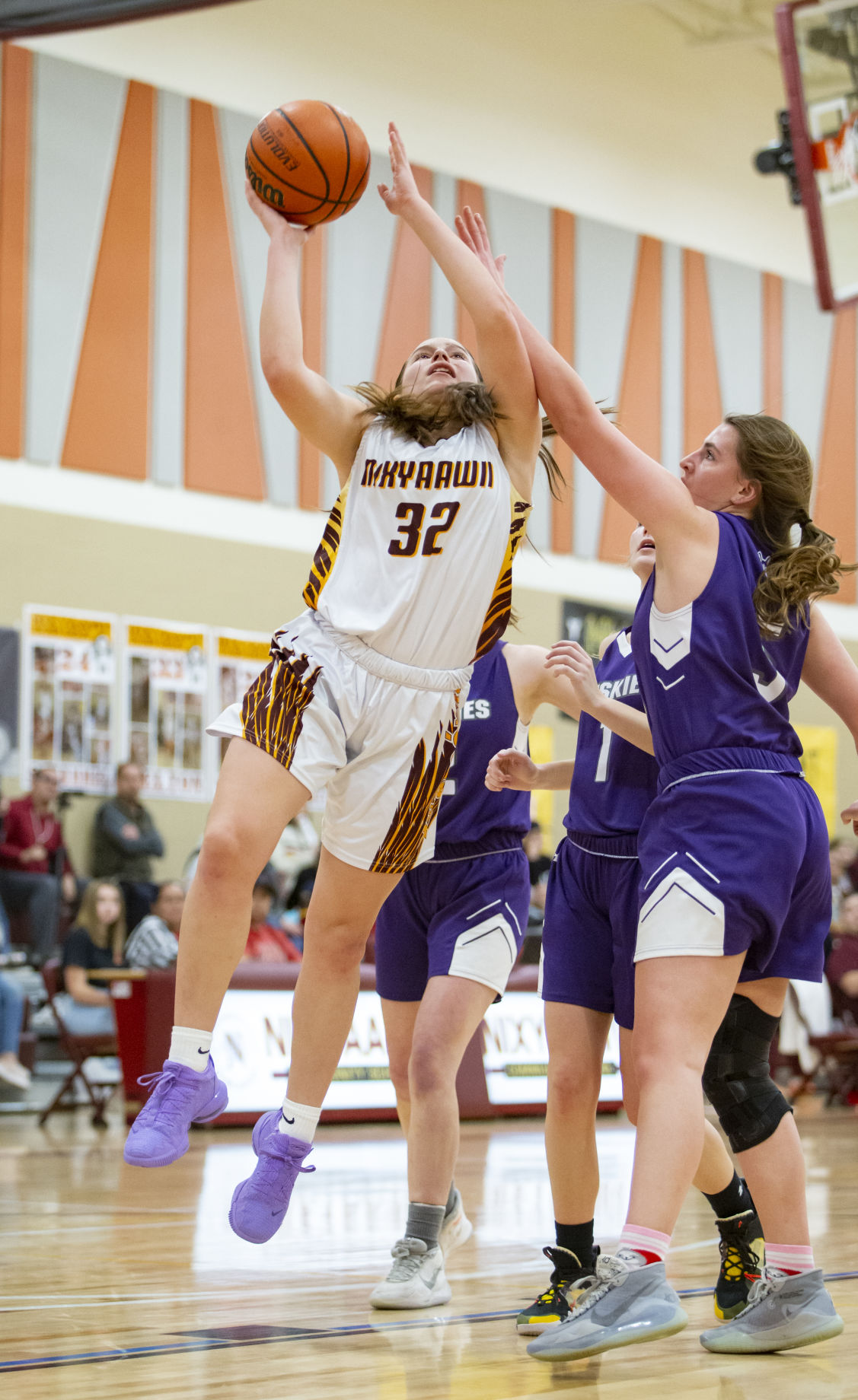 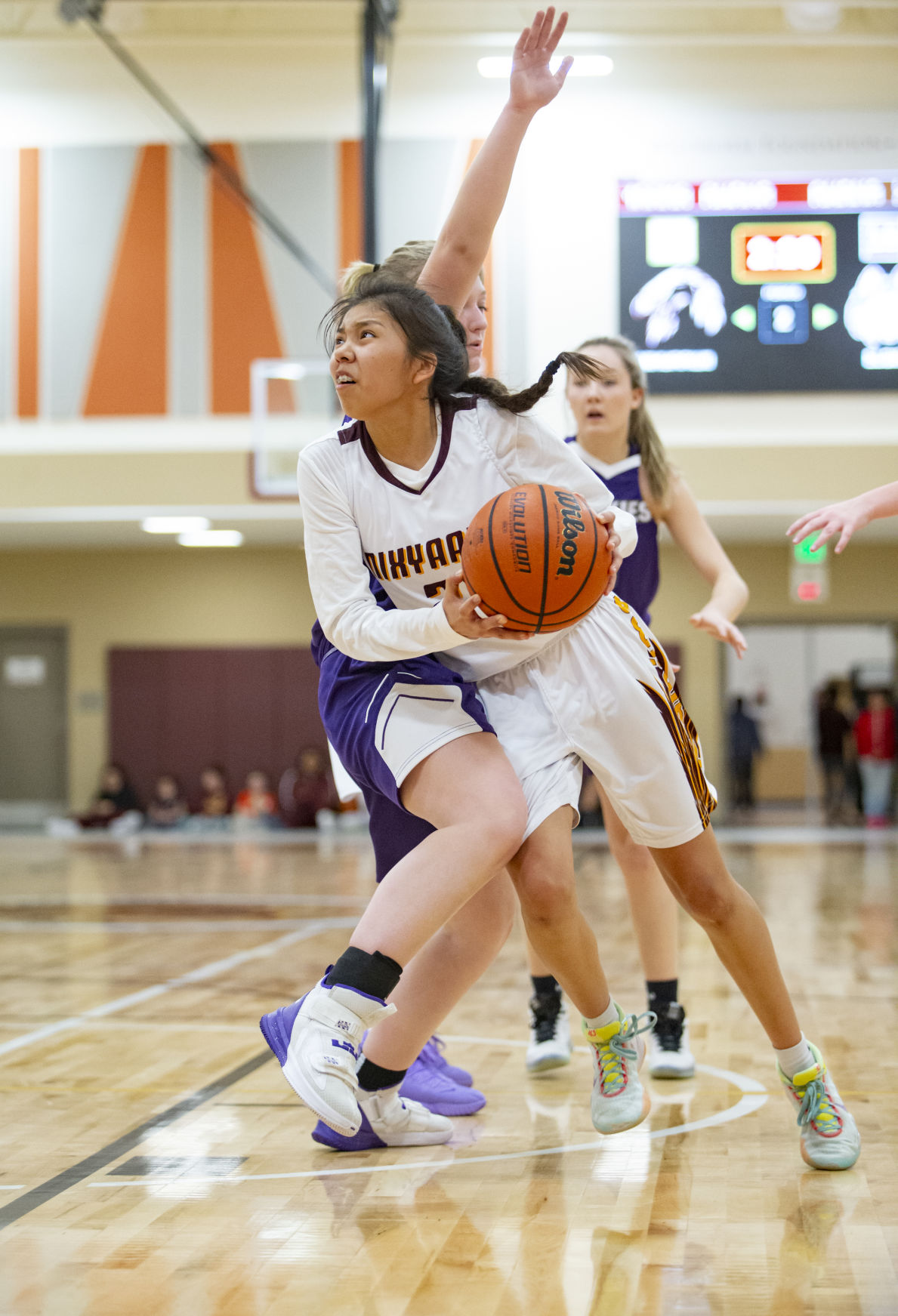 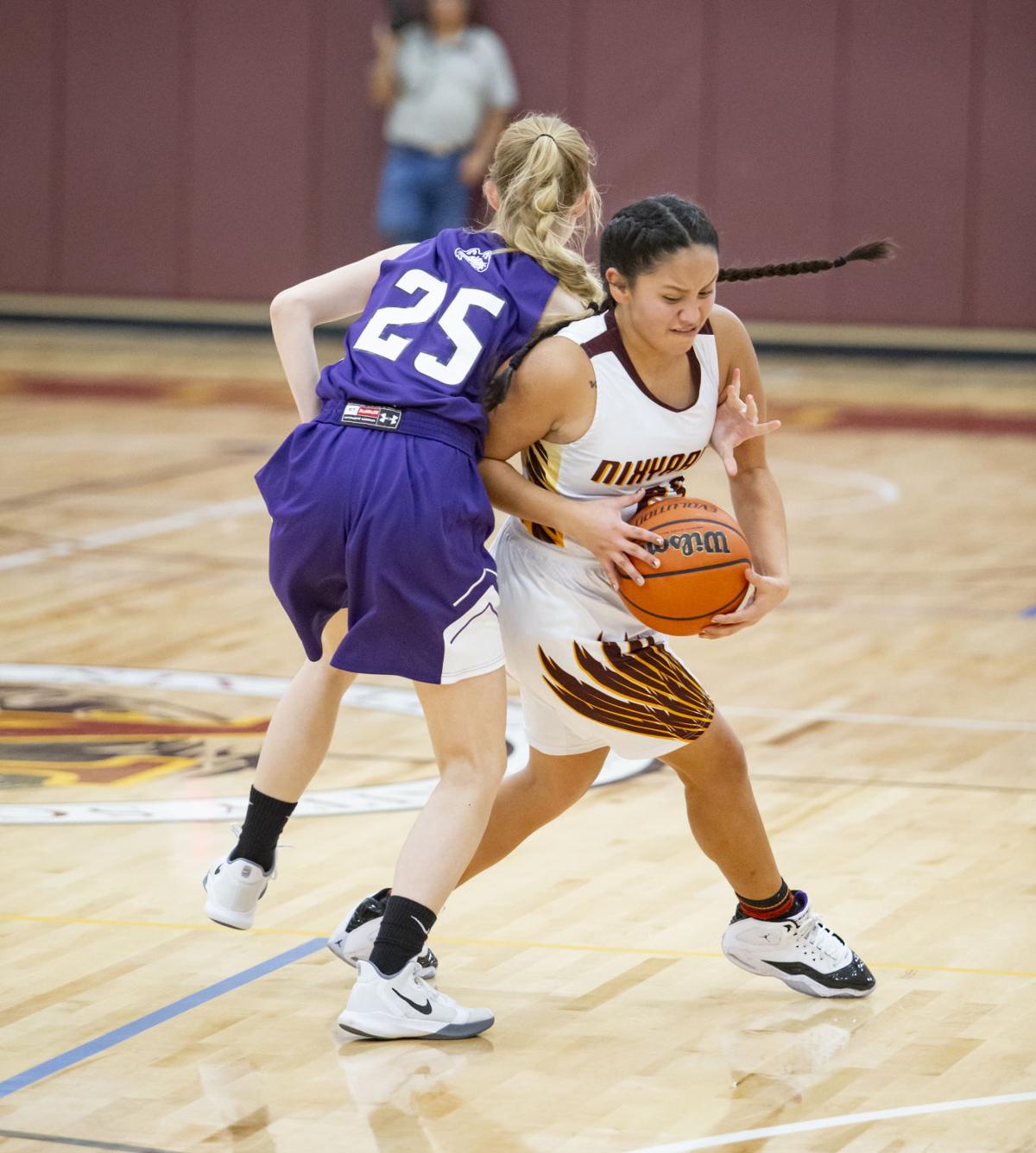 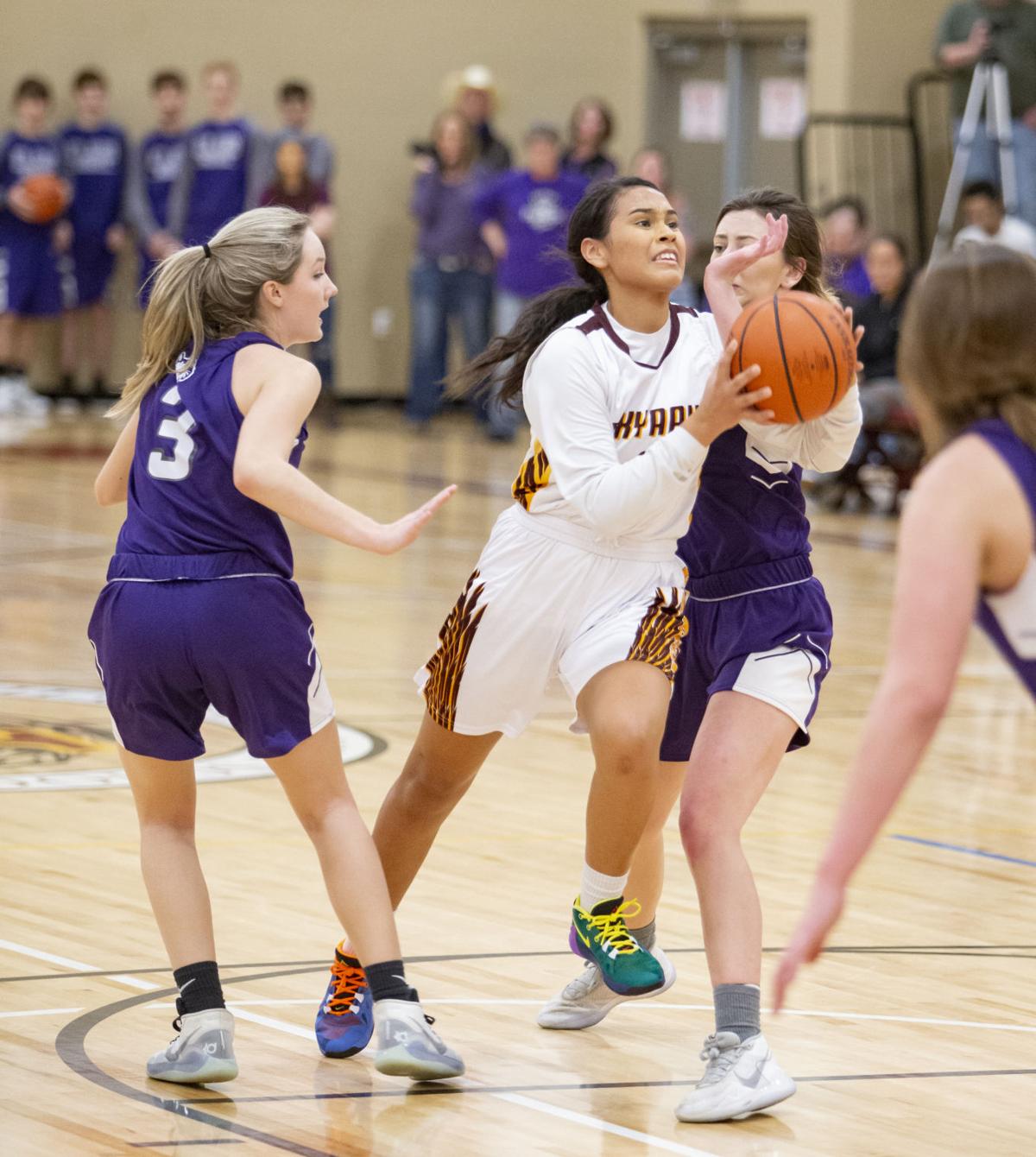 Nixyaawii’s Kylie Mountainchief (34) looks to take a shot during the first half against the Huskies. The Elgin Huskies defeated the Nixyaawii Golden Eagles 53-51 at Nixyaawii Community School on Friday night.

MISSION — In their final home showing of the regular season, the Nixyaawii girls put on one of their year’s most riveting performances, even if they ended up barely on the wrong side in the end.

The Golden Eagles suffered their game’s greatest deficit of 10 points at the third-quarter buzzer, but fought their way back into the action as freshman Sophie Bronson strung together two consecutive 3-pointers for a tied game and 20 seconds left to play in the fourth. Fouling got the best of the Golden Eagles, however, and two free throws were enough for the Old Oregon League’s top-ranked Elgin Huskies to fend off Nixyaawii 53-51 on Friday night.

“I feel good about this,” Nixyaawii head coach Jeremy Maddern said. “We fought back and got ourselves in it. We got good, open looks, but the shots just didn’t fall. Props to Elgin — they definitely deserved this win tonight.”

The Golden Eagles trailed by just four points in the opening minutes of the third quarter, and a basket from senior post Kylie Mountainchief knotted the score at 30-30 with 4:42 to go. Elgin then took off on a 13-3 run that spanned the remainder of the quarter, and Huskies sophomore guard Gracie Evans sunk a trey with five seconds left to keep Nixyaawii down 43-33.

Nixyaawii junior guard Adila Hart and freshman post Kyella Picard combined for five unanswered points to open the fourth, but the Golden Eagles proceeded to cough up eight points at the line across the next three minutes that kept Elgin ahead 51-43 with 1:06 remaining.

Picard put up a basket with 55 seconds remaining, and Bronson posted two back-to-back 3-pointers to tie the game at 51-51 as Golden Eagles fans leapt to their feet to celebrate the late comeback.

“The crowd really helped us,” Bronson said. “We had a lot of people behind us tonight. We were all positive. We were there for each other.”

Foul trouble continued to get the best of Nixyaawii in the final seconds as Evans and senior guard Jayden Palmer each put up a point at the line to keep the game out of reach.

Nixyaawii senior Lark Moses put up a shot from beyond the arc just before the final buzzer, but the ball bounced off the rim and kept the game in favor of the Huskies.

“There’s a reason they’re the No. 1 seed in our league,” Maddern said of Elgin. “They’re going to make a run at state.”

The league’s No. 5 Golden Eagles tied the score twice in the first quarter before making it out on top 9-8. Elgin took control in the second quarter off an eight-point run, capped off by a trey from junior guard Mariah Wilhelm at 3:30 for an 18-12 game.

“Elgin had some key shots,” said Bronson, who led Nixyaawii with 15 points. “They had a lot of fire in them. They wanted the win just as much as we did.”