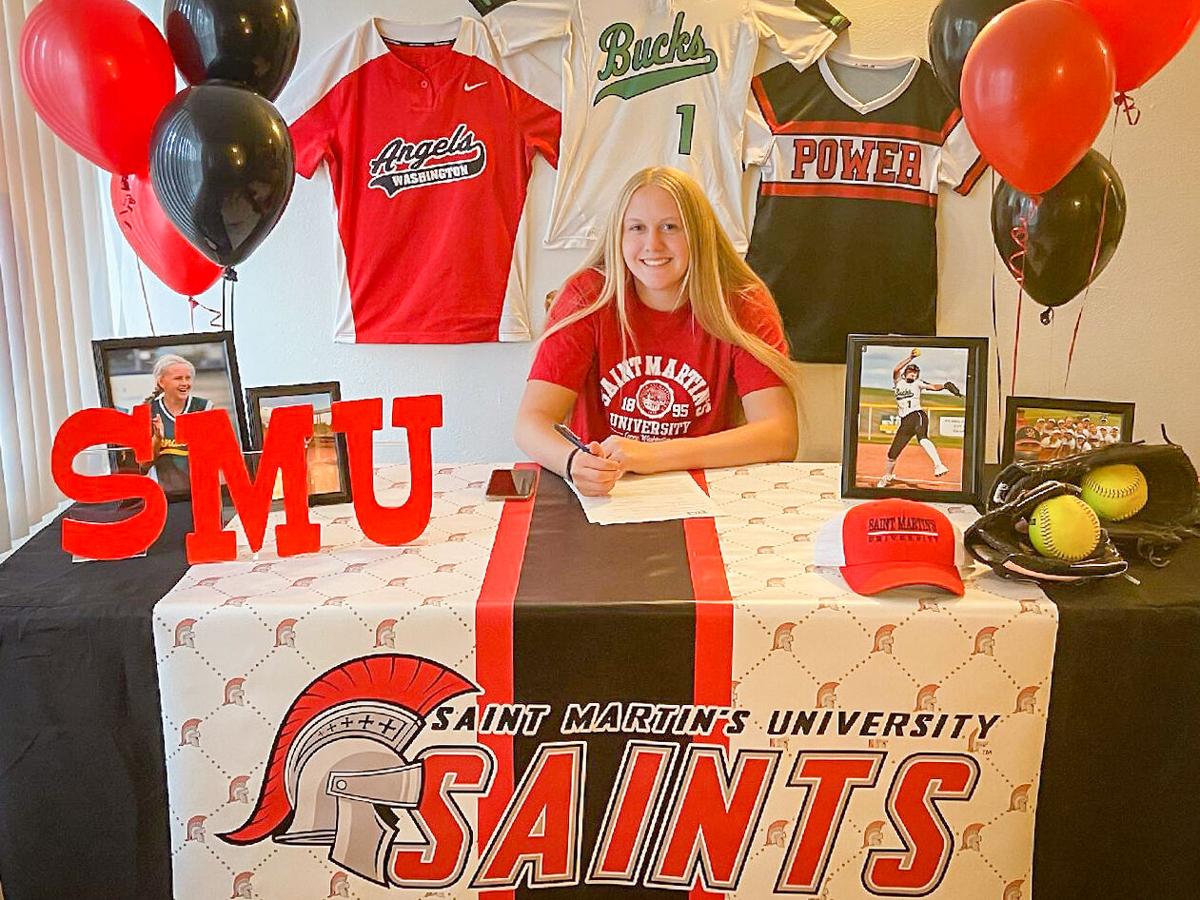 Kylie Parsons poses for a picture while signing a letter of intent to play softball for Saint Martin’s University on Nov. 15, 2020. 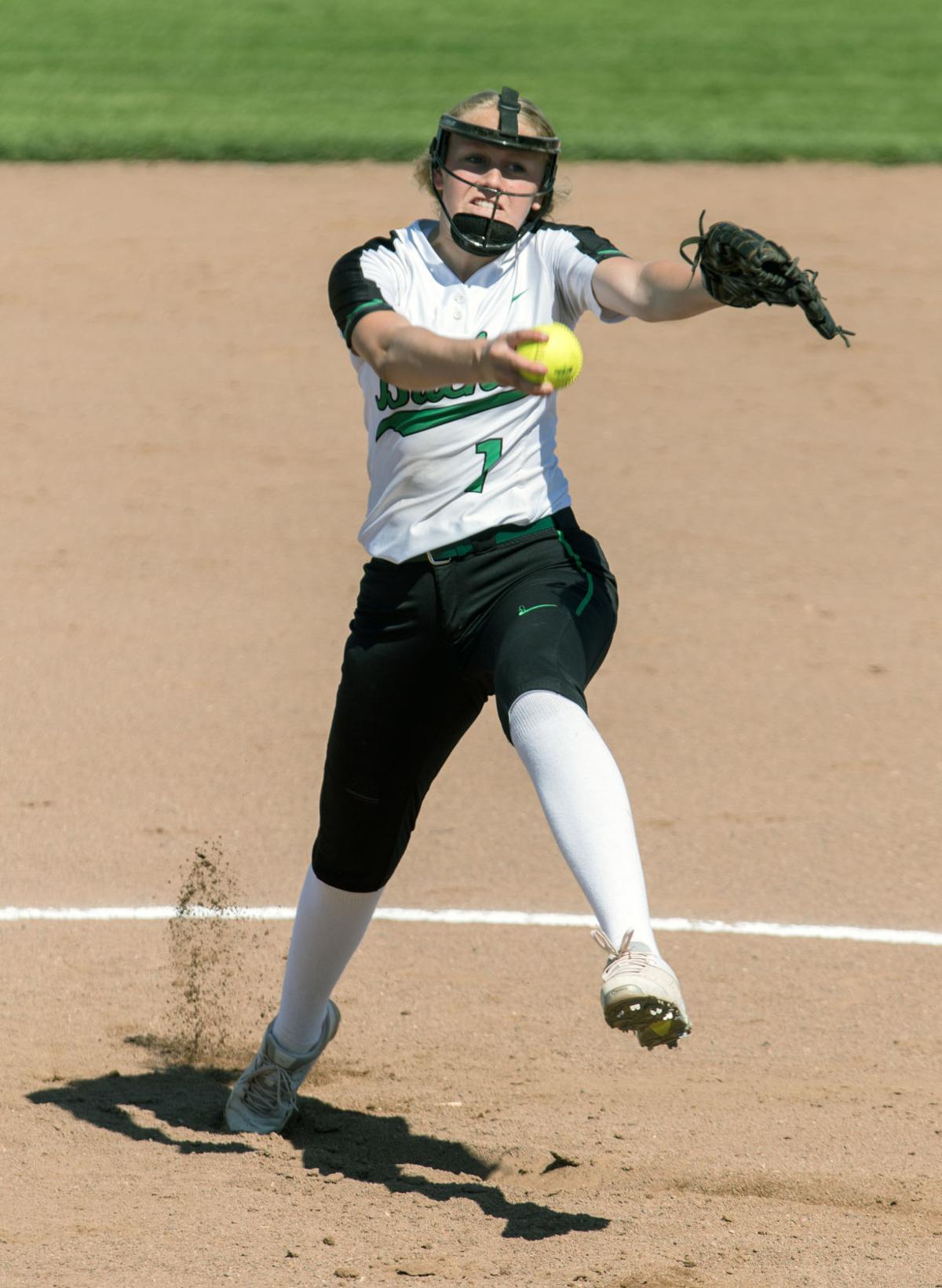 Kylie Parsons, of Pendleton, winds up for a pitch during the first of two games in April 2019 against Redmond at Steve Cary Field.

Kylie Parsons poses for a picture while signing a letter of intent to play softball for Saint Martin’s University on Nov. 15, 2020.

Kylie Parsons, of Pendleton, winds up for a pitch during the first of two games in April 2019 against Redmond at Steve Cary Field.

PENDLETON — Kylie Parsons’ pitching numbers her sophomore year would not be what college coaches are looking for, but two summers of elite softball elevated her game, and her improved numbers caught the attention of Saint Martin’s University.

The right-handed pitcher from Pendleton High School, who verbally committed to the Saints on Sept. 8, signed a letter of intent on Nov. 15 to play for the Div. II program in Lacey, Washington.

“I’m excited,” said Parsons, who received an academic/athletic scholarship. “I visited the campus in August to make sure I liked it.”

“We brought her up her sophomore year to get experience,” Pendleton softball coach Tim Cary said. “She has progressed a lot since that time and has developed into a very good pitcher.”

Parson has played three summers with the Tri-Cities-based Washington Angels, honing her skills.

“I’ve been able to play in the summer and some fall ball,” Parsons said. “We played a lot in Idaho because they were open. I pitched a lot this fall. We went to Arizona for a tournament a couple of weeks ago.”

Parsons also played in a tournament for Power Fastpitch of California.

“I met (Power’s) Damion Wynne and he was very helpful through the whole recruiting thing and made sure I could find a school that fit me,” Parsons said.

One quality that put Parsons on the college radar was her height. She stands 6 feet tall.

“Being tall gives me a lot more velocity on the ball,” she said.

Cary said Parsons has the tools to have a good college career.

“Kylie has the right build, and that puts her in a position to throw hard and be imposing,” he said.

The Bucks finished 9-6 in the Intermountain Conference and 17-10 overall during the 2019 season. They advanced to the 5A state quarterfinals where they lost a 9-3 game to West Albany.

Pendleton was set to return a solid team for the 2020 season, but the coronavirus pandemic wiped out the season.

“That was really hard,” Parsons said of missing her junior year. “I knew we would be able to go far. It’s been really hard not to play high school ball.”

While Cary too was disappointed in not having a high school season, he’s proud of the way his players have responded.

“With our season being canceled, they have found ways to pitch and get at-bats,” Cary said. “They aren’t just sitting around. Most are finding teams to play with. We had three girls down in Arizona a couple of weeks ago with three different teams. They all did well.”

Oregon Gov. Kate Brown canceled all indoor sports activities earlier this week. The freeze is effective through Dec. 2, but could be extended. Outdoor activities are still allowed for schools utilizing on-site, hybrid, or comprehensive distance learning.

Oregon School Activities Association spring sports, which include baseball, softball, track and field, tennis and golf, are scheduled to begin practices April 19, with the first competition May 3.

With the new mandates, Parsons is concerned she may not have a senior season.

“It’s still a while from now, but I don’t know if we will get to play,” she said. “My next game could be in college.”