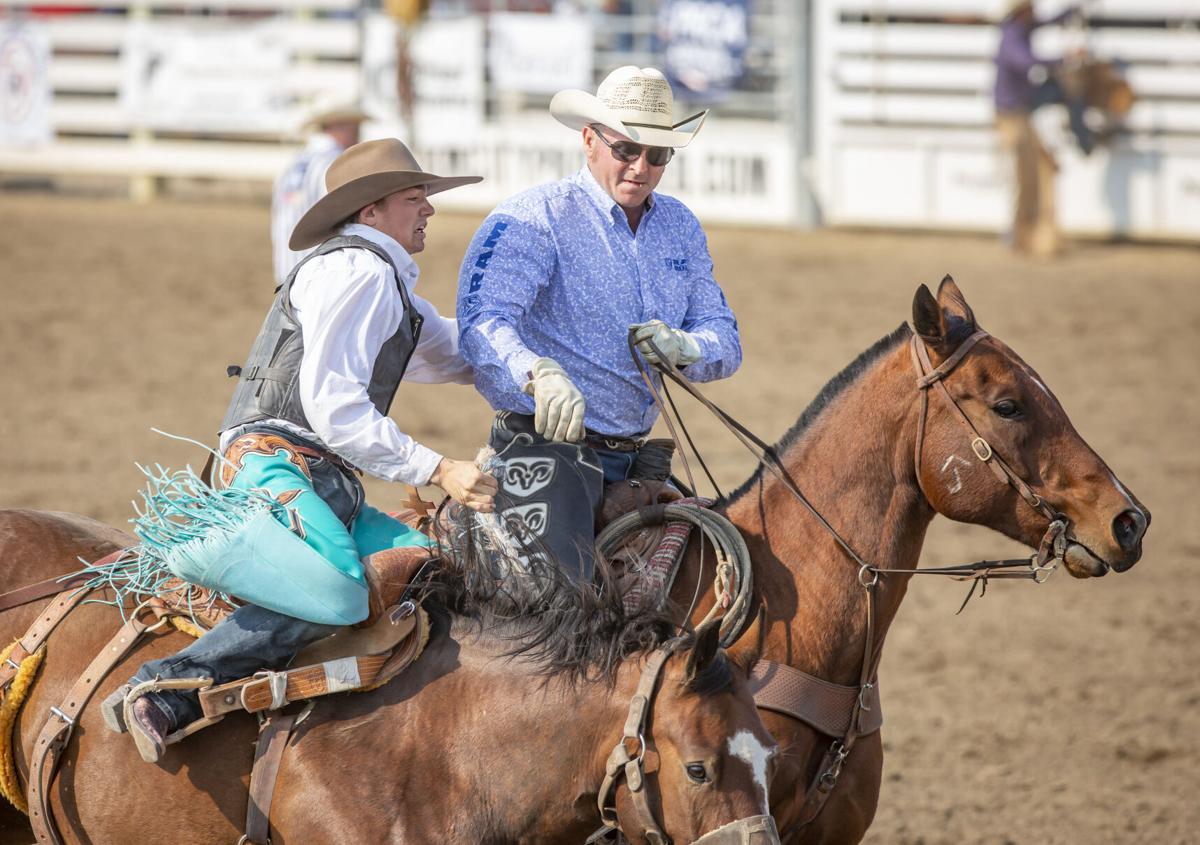 Joe Blankenship picks up saddle bronc rider Martin Joyce, of Juntura, after an 86.5 point ride atop Bay Wolf at the Columbia River Circuit Finals in Hermiston on Saturday, Oct. 3, 2020. 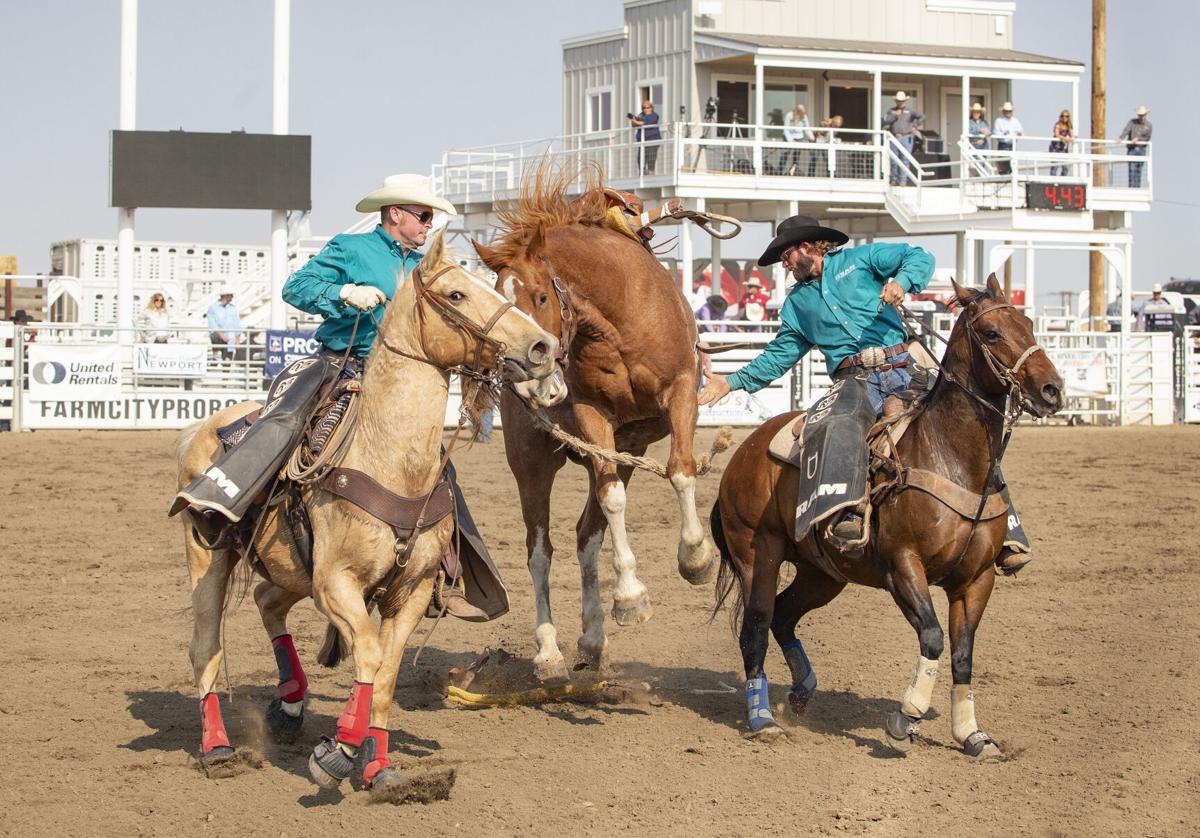 Pickup men Joe Blankenship, left, and Jacob Stacy attempt to gain control of Majorhuckleberry during the saddle bronc event at the Columbia River Circuit Finals in Hermiston on Friday, Oct. 2, 2020.

Joe Blankenship picks up saddle bronc rider Martin Joyce, of Juntura, after an 86.5 point ride atop Bay Wolf at the Columbia River Circuit Finals in Hermiston on Saturday, Oct. 3, 2020.

Pickup men Joe Blankenship, left, and Jacob Stacy attempt to gain control of Majorhuckleberry during the saddle bronc event at the Columbia River Circuit Finals in Hermiston on Friday, Oct. 2, 2020.

HERMISTON — Joe Blankenship was just a few weeks old when he attended his first rodeo. By the time he was 5 years old, he was helping his dad Bill separate horses and bulls.

The rest is history.

Bill Blankenship, who worked for the state of Montana, was a pickup man on the side. He worked in rodeo arenas until he retired at 54.

Joe Blankenship has continued in the family business.

“I rode bulls in college, but I have been doing this (pickup man) on and off since I was in high school,” Blankenship said.

Blankenship, 46, who moved to the Pendleton area two years ago with his son Boone, worked his first Columbia River Circuit Finals this past weekend at the Eastern Oregon Trade and Event Center.

“I was established back home (North Dakota), and when I moved out here, I had heard of (contractors) Mike Corey and Flying 5,” Blankenship said. “I worked some Flying 5 rodeos in 2019, and I feel very fortunate to work the finals. It means a lot.”

Life of a pickup man

When a cowboy’s 8-second ride is over, the pickup men move in alongside the horse and rider. If everything goes as planned, the rider grabs the pickup man around the waist, slides onto the horse and is guided to safety. The cinch is then released and the horse is herded out of the arena.

Saddle bronc rider Joe Harper of Paradise Valley, Nevada, has great respect for the men who keep him safe.

“You can’t put a value on a good pickup man,” Harper said. “They control the chaos and slow things down. To the stock contractors, they are invaluable; they keep the horses safe. For us, it’s a safe trip to the ground. A lot of guys have broken their legs or shattered their knees trying to jump off.”

Harper also gauges how well the pickup men understand the arena and the animals.

“One of the things I look for is how well they take care of the cowboy and the horse,” Harper said. “You have to have a feel for it.”

No matter how well a pickup man does his job, sometimes things go awry.

While most spills come with just a few bumps and bruises, some have dire consequences.

Kansas veteran pickup man Rex Bugbee was involved in an accident in the arena in Guymon, Oklahoma, on Aug. 25, and later died of his injuries.

“A lot of things can happen,” Blankenship said. “The bucking horses are animals and they all have personalities. It’s pretty amazing there aren’t more wrecks than there are.”

Pickup men also help work the animals at the rodeo, leading steers, calves and bulls out of the arena.

There aren’t many accolades for a pickup man, but Blankenship said he doesn’t do it for the recognition.

“I don’t do it for the money,” he said. “I do it because I love it, and I like training my horses and making them pickup horses. A bullfighter can make a great save, but there really is no glory for a pickup man.”

Blankenship grew up in Glendive, Montana, but was living in Dickinson, North Dakota, before he and his son moved to Oregon.

“I work for a livestock supplement company (New Generation Supplements) and they had a territory (Oregon, Washington and Idaho) open up out here,” Blankenship said. “They let me fly out here for a year to see if I liked it. Pat Beard and I became great friends and I decided on the Pendleton area. People are friendly, they wave, and it’s a lot like back home.”

Being a rodeo man, Blankenship instantly was drawn to Pendleton.

“There is something about Pendleton and the Round-Up,” he said. “It is so unique. Last year, I got called to be a volunteer with the Round-Up. I helped with the timed events. I would only hope to work the Round-Up one day. That would be the ultimate on my bucket list.”

One big difference between Pendleton and North Dakota is the weather.

“The weather is nothing like back home, where it gets pretty cold in the winter,” Blankenship said. “I think my horses think they have died and gone to heaven with the climate we have here.”

The Blankenships moved from Pendleton to Athena a couple of weeks ago. Boone, 16, is a junior at Weston-McEwen High School, where he plans to play football and baseball.

HERMISTON — With Heppner’s Blake Knowles holding the lead with a time of 8.7 seconds on two runs, Dalton Massey knew he had to have a quick ru…