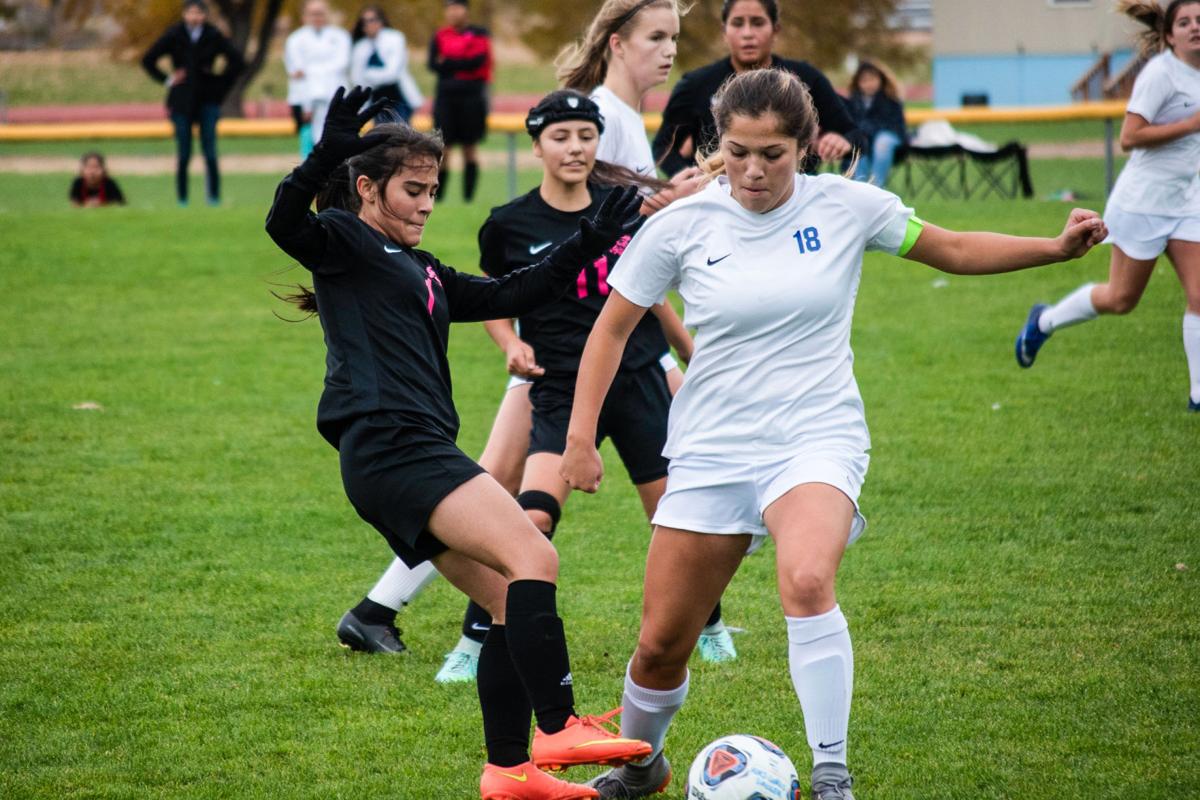 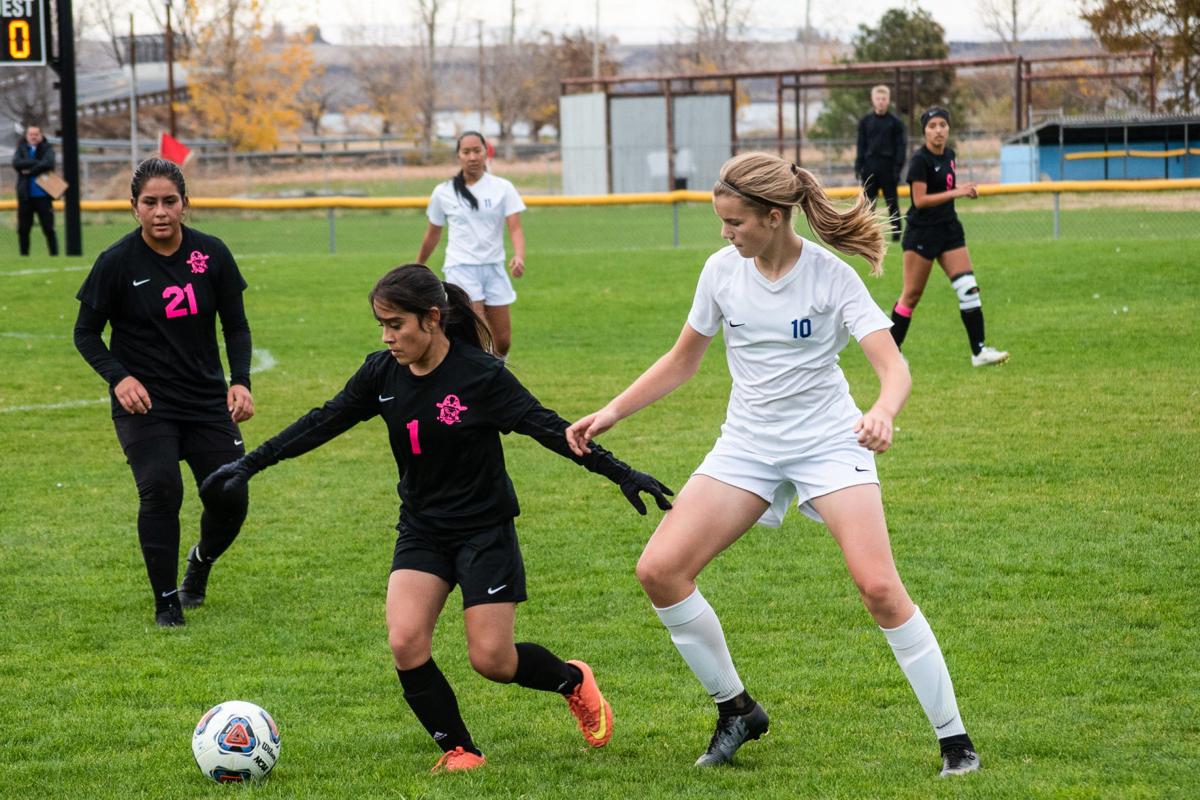 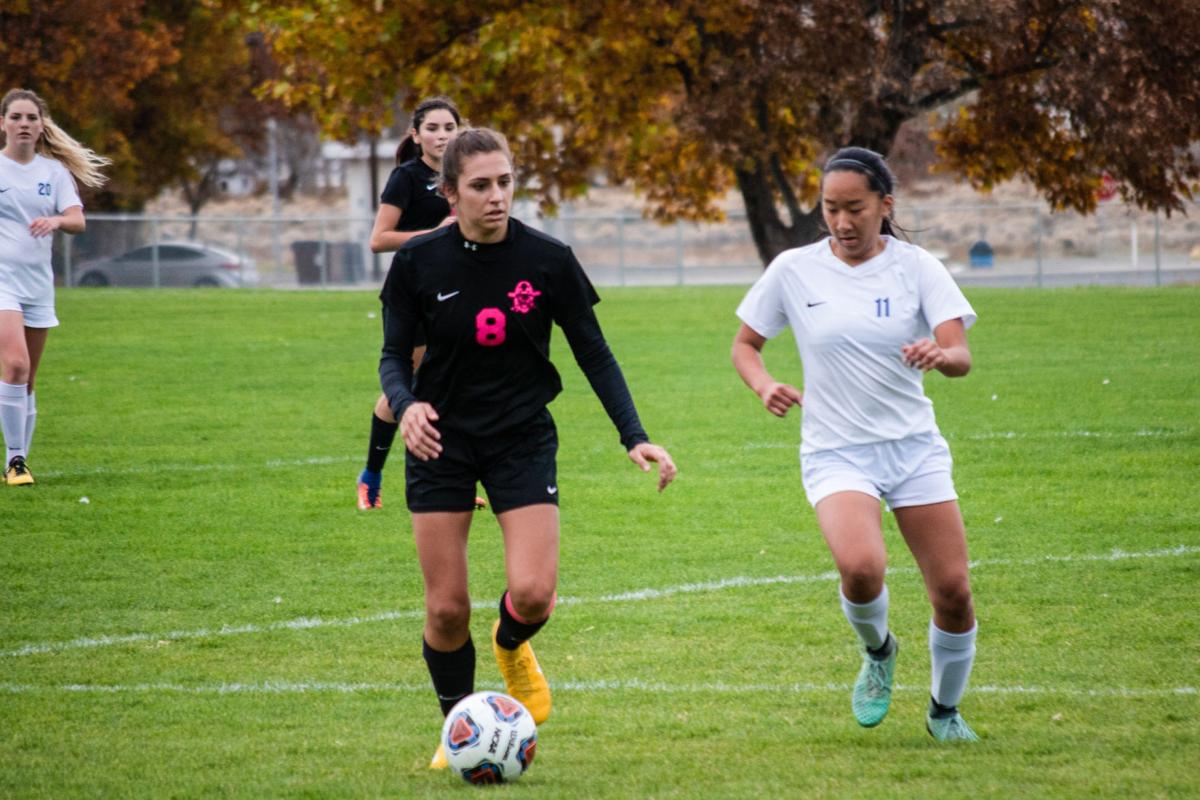 Riverside's Faith Rosen dribbles the ball away from Western Christian's Mae Choi in Boardman on Wednesday.

Riverside's Faith Rosen dribbles the ball away from Western Christian's Mae Choi in Boardman on Wednesday.

Riverside battled through two scoreless halves, injuries, and overtime to secure a first round win in the OSAA state championships.

The Pirates and visiting Western Christian Pioneers held each other scoreless through the entire match until a goal in the second overtime period gave Riverside the victory.

But the low score wasn’t because of a lack of effort. Midfielders Layla Castillo had eight shots-on-goal, Neftali Pacheco had four, and Brendy Avalos had three to lead the team. Pacheco and forward Samantha Rea were both assisted off the field by head coach Carlos Velasco after colliding with Western Christian players in attempts to regain possession.

The first of two, 10-minute overtime periods saw the Pioneers nearly claim the lead. After starting in their possession, forward Bianca Avalos put the ball in the net just as an offsides penalty was called on the team, negating the score.

In the second period, freshman defender Jasmin Lopez seized the opportunity that the Pioneers couldn’t. Lopez finally gave her team the lead, scoring off a pass from midfielder Marisol Pacheco to end the game 1-0.

Lopez was moved from her usual position as a defender to forward during the last several minutes of the second half. Coach Velasco said it was a gamble, but it ultimately paid off for the Pirates.

“She’s a very good forward,” he said. “She’s a fast girl. It was an intense game. (Western Christian is) a really good team with great players. We just kept battling until we scored.”

The Pirates will now move forward into the quarterfinals on Saturday, when they’ll travel to Medford to face No. 2-ranked St. Mary’s. St. Mary’s is one of the 3A/2A/1A’s toughest teams, having recorded one loss this year —- their nonleague season opener against Catlin Gabel. On Wednesday, they shut out Douglas 5-0.

NORTH VALLEY 9, MAC-HI 0 — Mac-Hi went all out against No. 4-ranked North Valley during their round one 4A district playoffs match in Grants Pass on Wednesday. But it turned out to be a rough night for the Pioneers.

Mac-Hi ultimately went home scoreless, and goalie Daisy Alvarez was sent to the emergency room after suffering whiplash from a fall while trying to defend the ball. At press time, coach Martin Martinez and the team were still waiting to hear back on her recovery. The injury ended the game 15 minutes early.

“We got three shots in during the first five minutes, and one of them even hit the pole,” Martinez said. “We tried our best and pressured the ball, but North Valley is a great team. Once their first goal got in, they just kept coming.”