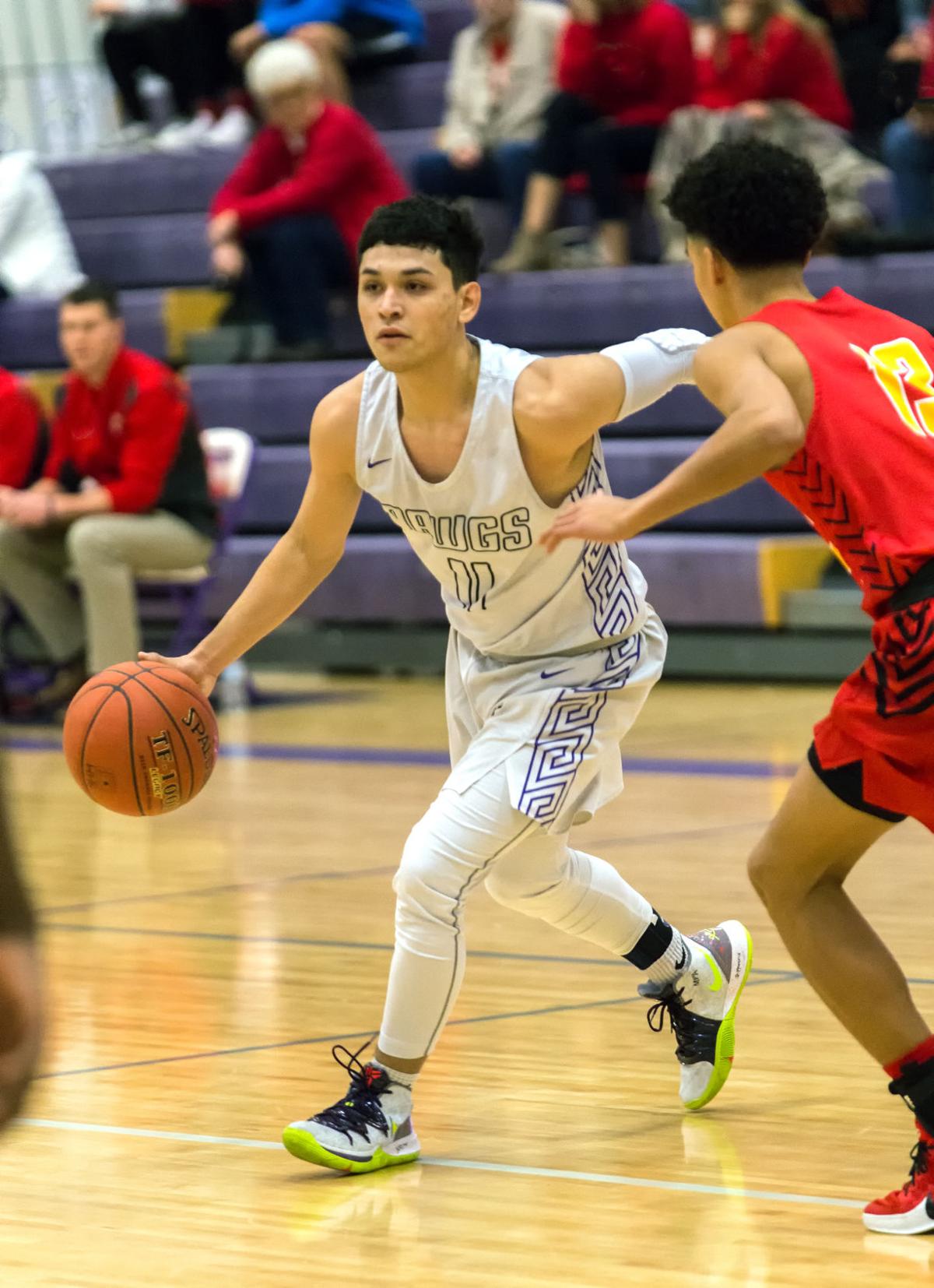 A.J. Ramos-Barron (11), of Hermiston, tries to work the ball inside during Saturday’s game against Kamiakin at the Dawg House. 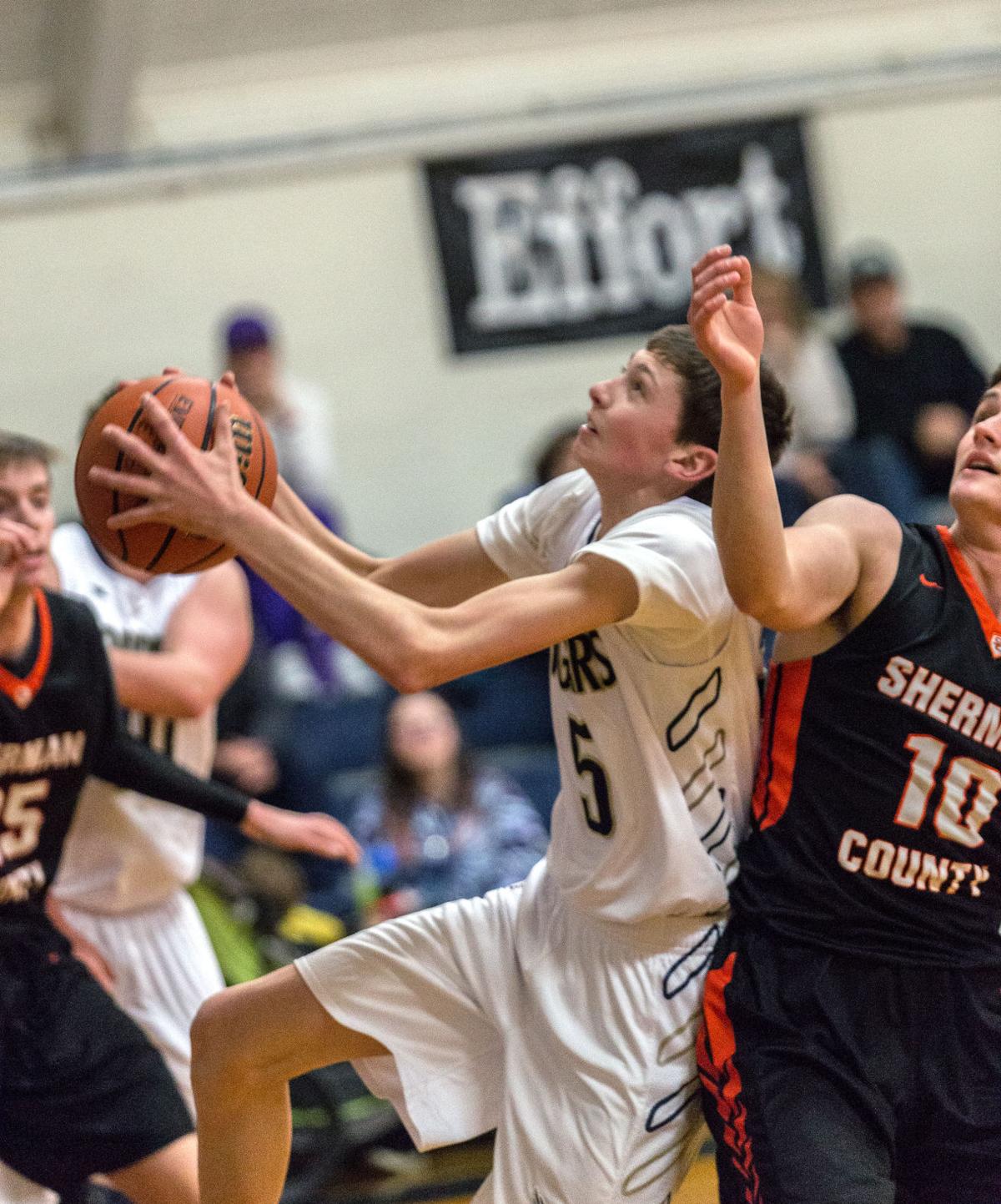 Mason Murdock (5), of Echo, goes to the hoop during Saturday’s game against the Sherman Huskies. 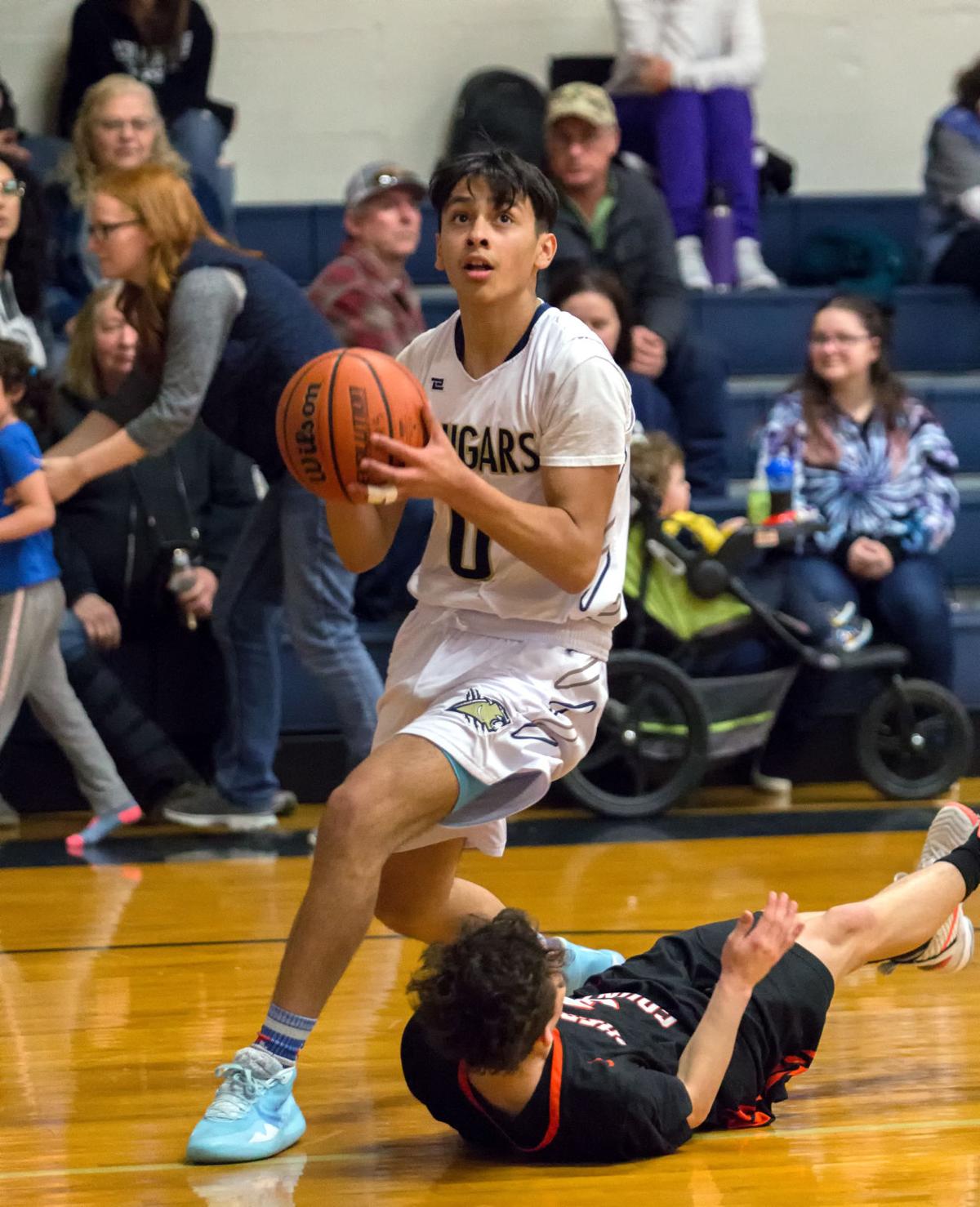 Javon Curiel (0), of Echo, eyes the basket during Saturday’s game, making his way around a fallen Sherman player.

A.J. Ramos-Barron (11), of Hermiston, tries to work the ball inside during Saturday’s game against Kamiakin at the Dawg House.

Mason Murdock (5), of Echo, goes to the hoop during Saturday’s game against the Sherman Huskies.

Javon Curiel (0), of Echo, eyes the basket during Saturday’s game, making his way around a fallen Sherman player.

HERMISTON — The Bulldogs fell to an eight-game skid as they dropped a 78-29 Mid-Columbia Conference matchup against Kamiakin in Hermiston on Saturday night.

Chase Elliott was the only Hermiston player to score in double digits, finishing with 13 on the night. The Bulldogs were held to just three points in the fourth quarter — a basket from Miguel Moreno and a point at the line from Elliott.

Marcellus Brinkley hit a 3-pointer to turn it into a one-point game for the Pioneers, and Ontario responded with a free throw for a 42-40 lead.

Mac-Hi’s Cristian Castillo hit a buzzer-beating trey from the right wing to steal the win.

SHERMAN COUNTY 57, ECHO 30 — The Cougars fell to 0-4 in Big Sky League after a home loss to the Huskies.

Mason Murdock scored a team-high 15 points and shot 7-of-8 from the field for Echo. Sherman County’s Wade Field was a perfect 7-for-7 from the floor and finished with 15 points.

NIXYAAWII 73, HELIX 42 — Tyasin Burns poured in 29 points to lead the Golden Eagles to an Old Oregon League road win over the Grizzlies.

MITCHELL/SPRAY 54, IONE/ARLINGTON 51 — The Cardinals dropped their second consecutive Big Sky League game with a narrow road loss to the Loggers.

STANFIELD 55, WESTON-MCEWEN 29 — Nyah Tejeda netted a game-best 14 points with three treys, and not a single TigerScot could break into double digits as Stanfield rolled to a Blue Mountain Conference road win on Saturday.

“We struggled to convert shot opportunities in the first half,” Weston-McEwen head coach Jeff Griggs said, “but we never gave up and were able to assert ourselves better in the second half. Stanfield is a fine team and earned their win tonight.”

The Tigers got 12 points from Kendra Hart, while the TigerScots were led by Trinity Hearn with nine points.

MAC-HI 30, ONTARIO 29 — The Pioneers got a layup from Emma Leber with 5 seconds remaining to help Mac-Hi to its first Greater Oregon League win since 2015.

“(Ontario) really packed it into a 2-3 zone and really left people wide open, we just didn’t do a very good job of hitting shots,” Mac-Hi coach Chris Bryant said. “But overall, they played with good energy.”

Mac-Hi will host Nixyaawii at 6 p.m. Tuesday in a nonleague game.

HEPPNER 63, PILOT ROCK 35 — Sydney Wilson poured in a career-high 38 points for the Mustangs in a Blue Mountain Conference road win over the Rockets.

Wilson, who scored 21 of her points in the second half, also had 14 rebounds and four steals to her credit. ZaBrena Masterson had nine points and four rebounds.

Helix was led by Kyla Harper with six points.