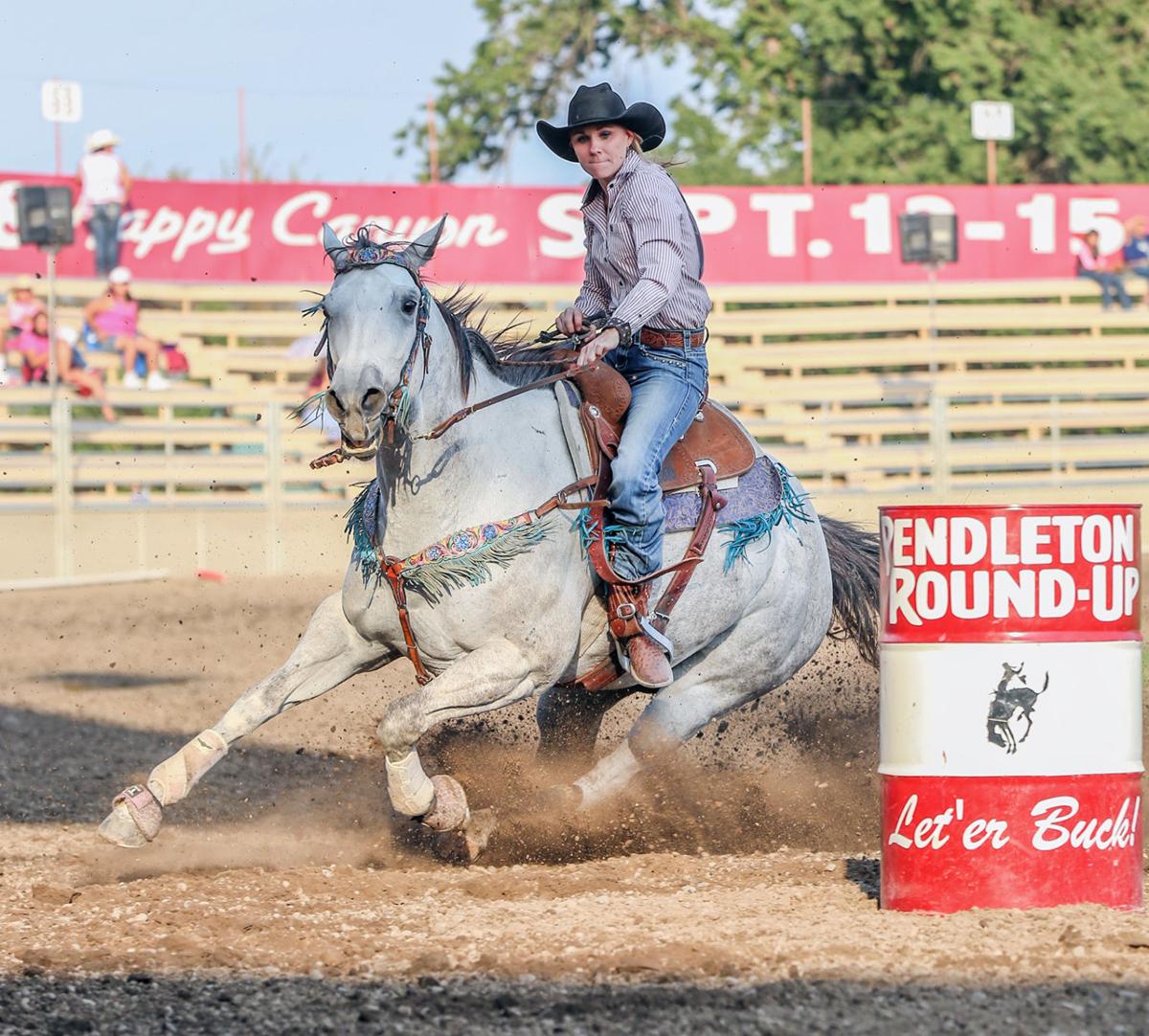 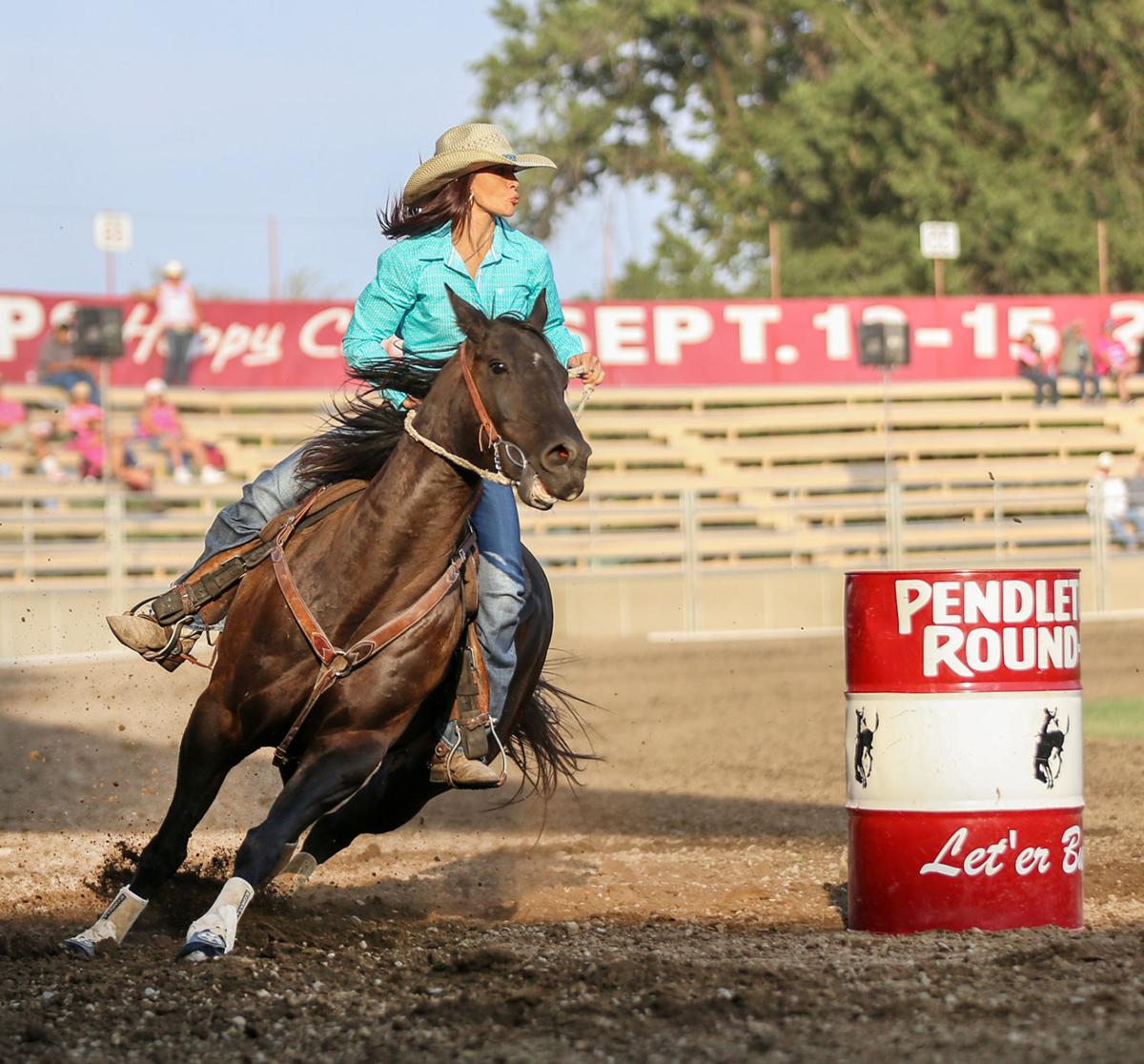 PENDLETON — Cowgirls have been making history at the Pendleton Round-Up before breakaway roping was added to the event schedule in 2016. Barrel racers have had to guide their horses around the world’s longest barrel racing track year in and year out.

Because of the grass infield, the barrels are placed exceptionally far away. Two are placed on each of the two straightaways and one sits in the middle of a curve on the dirt track that surrounds the football field length greenish brown sod. For many it can be a deterrent, for others a chance to show of the speed of their horse, and for some a first time experience that is unlike any other. There are a select few who get a chance to experience all of that in their hometown.

“It’s probably one of the coolest places,” Hermiston’s own Mary Shae Hays said after her 29.62 ride. “It’s the biggest adrenaline rush for me. It makes you just want to go and run again.”

But Hays nows that see no longer has control of whether or not she will be back to compete for the championship on Saturday, and she admits that sometimes you just have to wait another year if things don’t go your way.

Before the Round-Up officially started on Wednesday, six cowgirls posted sub-29 second times in slack on Monday and Tuesday. Since then cowgirls have been yet to come close to that time and with only six spots up for grabs in the championships the margin for error is nonexistent. So riders have to be confident in their preparation, which is something Hays questioned near the end of her ride.

“I thought it was going to be faster but I think he just ran out of air on the way home,” she said.

Despite this Hays felt good about her ride. It’s only her second year at the Round-Up, but with the stadium being a short drive away she’s familiar with the one-of-a-kind set up and knows what it takes to be successful in this arena.

“It’s a lot of long trotting, exercising,” Hays described as her preparation for the rodeo. “I go out in this flat area and sprint him — just try to get him in the best shape. I guess he could have been in a little better shape.”

Preparing for the track here is challenging. If a cowgirl that is just 30 miles away has a tough time getting her horse in shape, Round-Up rookies have another thing coming.

Jessi Cronquist was one of those rookies. The Plain City, Utah, native made her first trip to Pendleton in style, as she recorded the third fastest time of the day: 29.5 seconds. It was the shortest and longest 29.5 seconds of her life.

“That was awesome,” where some of the first words out of Cronquist’s mouth following her ride.

“That was an adrenaline rush times 10,” she added. “It just kept going and going.”

Cronquist ride was as picturesque as it could be. Her young horse stretched out across the grass going from barrel to barrel with strides that put the six-year-old up there with the veterans. If you ask Cronquist, though, it was really just a shot in the dark.

To prepare for Pendleton, Cronquist had the same challenges as Hays: she had to get her horse into Round-Up riding shape.

“I set barrels up in random fields,” Cronquist said. “I set one up in an arena, one out in a field, one up in the middle of a trailer, and just made horse start hunting barrels.”

Both Hays and Cronquist will have to sweat out the final day of the long go to see if their performances were good enough to return once again to the most extraordinary barrel racing track in rodeo.