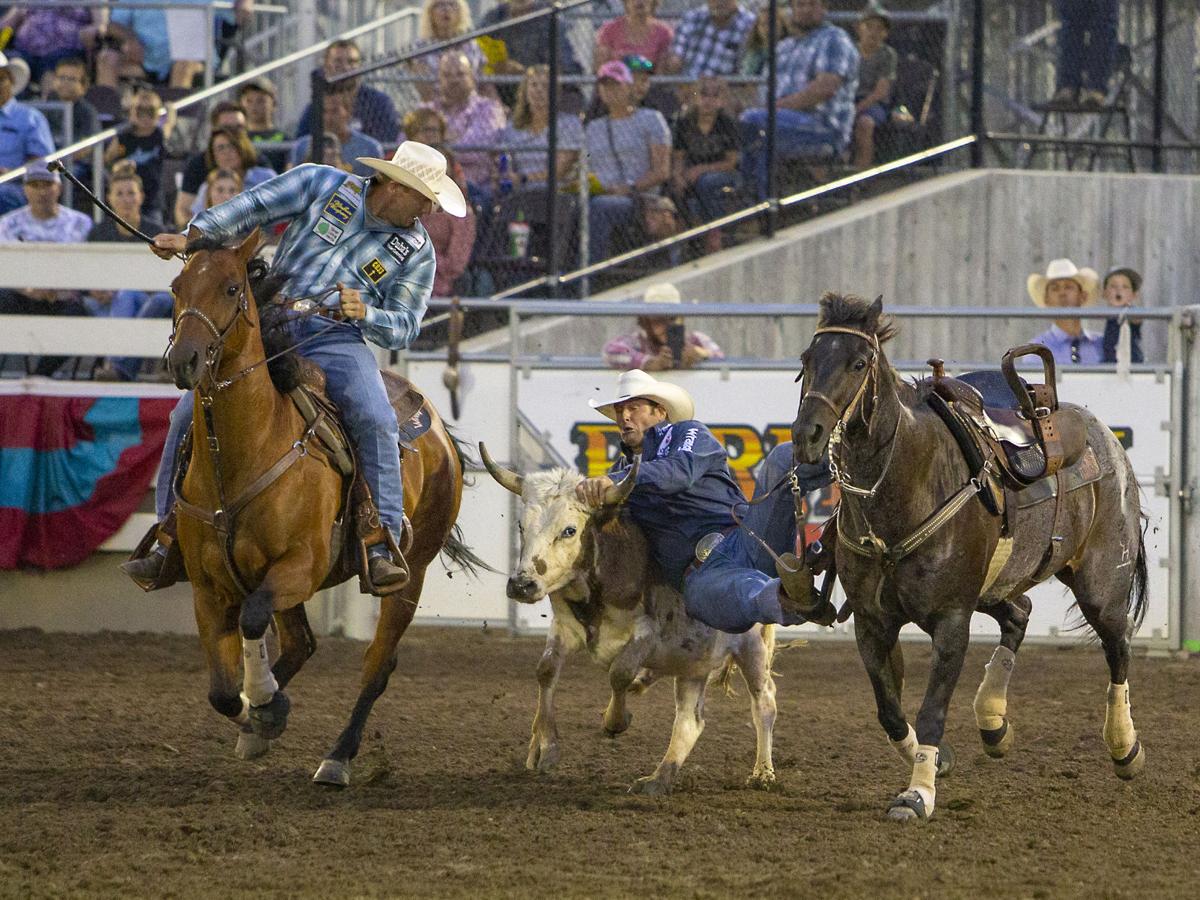 Heppner’s Blake Knowles leaps from his horse in the steer wrestling competition last year at the Farm-City Pro Rodeo in Hermiston. 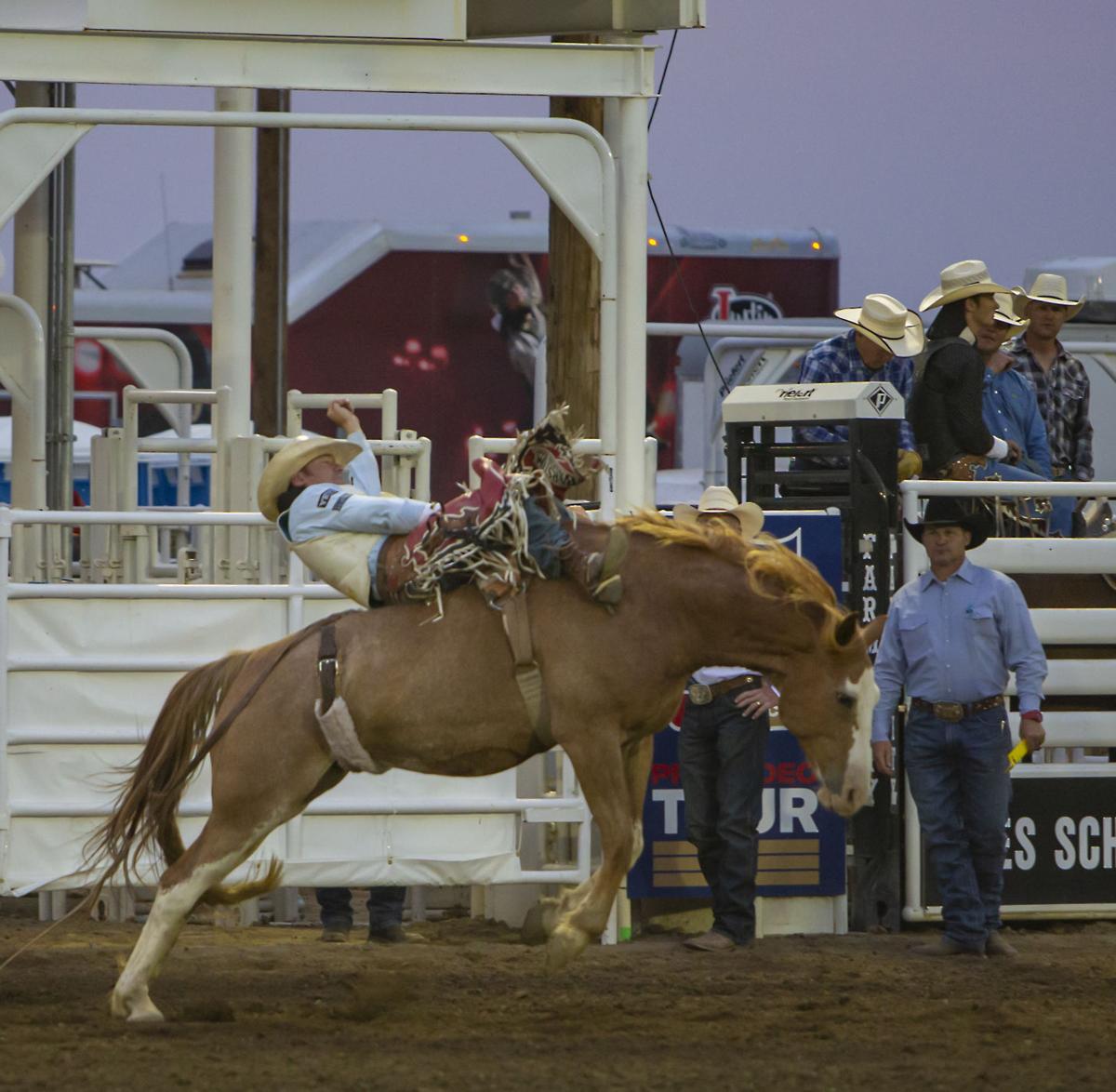 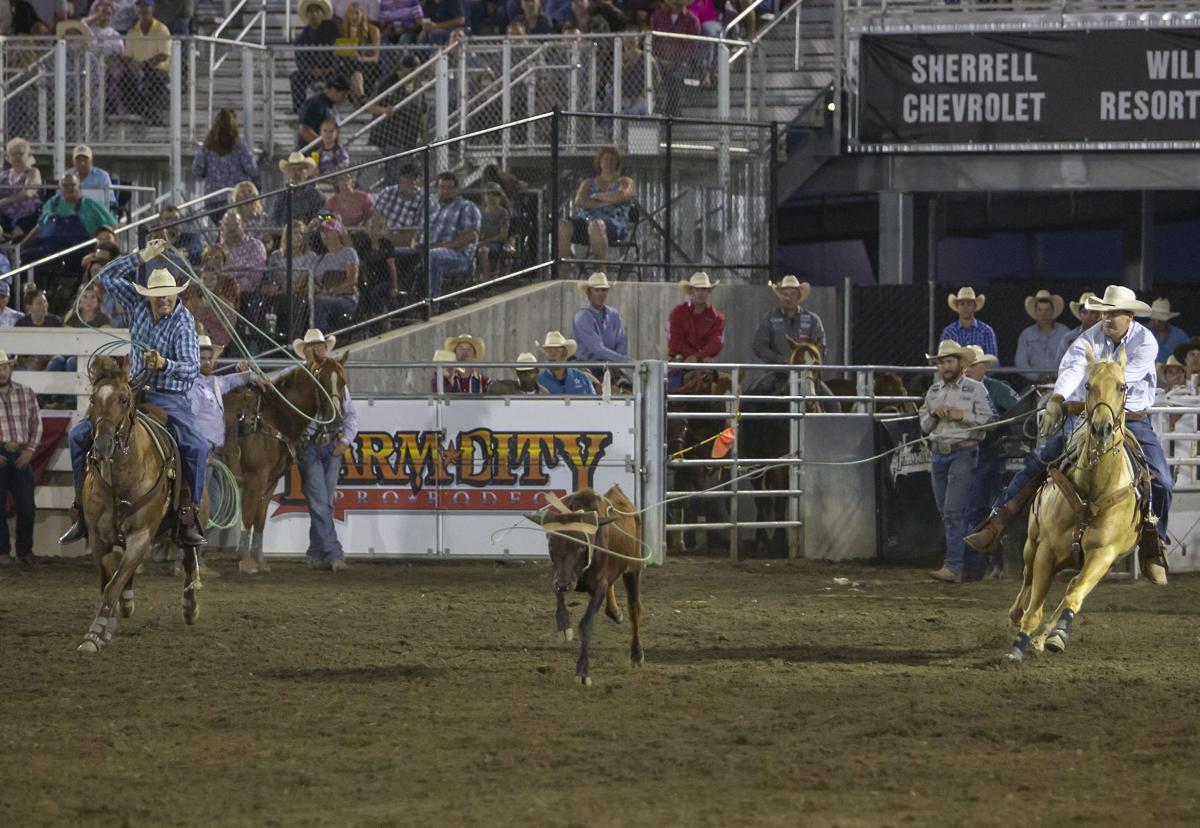 Hermiston’s Tyler Smith and Andy Carlson work to rope a steer in the team roping competition at the Farm-City Pro Rodeo Friday night. 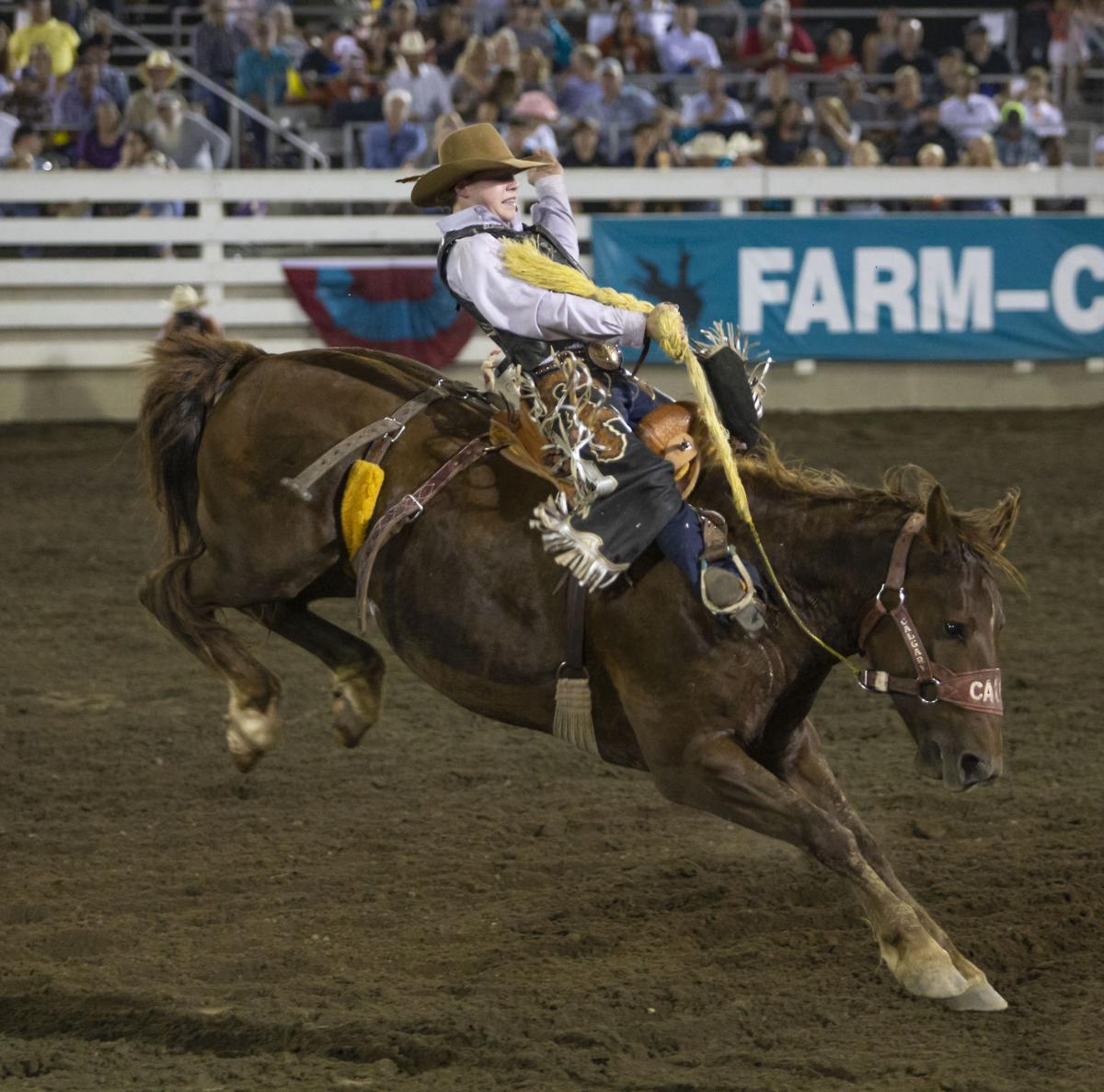 Dawson Hay of Wildwood, Alberta, hangs on to Arriving Kamloops during the saddle bronc competition at the Farm-City Pro Rodeo Friday night.

Heppner’s Blake Knowles leaps from his horse in the steer wrestling competition last year at the Farm-City Pro Rodeo in Hermiston.

Hermiston’s Tyler Smith and Andy Carlson work to rope a steer in the team roping competition at the Farm-City Pro Rodeo Friday night.

Dawson Hay of Wildwood, Alberta, hangs on to Arriving Kamloops during the saddle bronc competition at the Farm-City Pro Rodeo Friday night.

HERMISTON — Blake Knowles put a surge of electricity through the Farm-City Pro Rodeo crowd Friday night, but Mother Nature upstaged him 30 minutes later with a lightning storm that halted the action just before the tie-down roping.

The Heppner cowboy, aboard his 18-year-old horse Smoke, turned in a time of 3.9 seconds in the steer wrestling to move to the top of the second go-round as the applause rained from the grandstands.

“It’s nice to be in front of the home crowd, but it’s not easy,” Knowles said. “They think you are talented at this sport — it can go wrong.”

Knowles failed to turn in a time on his first run, so go money is all he can hope for with one night of action remaining.

“To win the good money, you have to put it all together,” he said. “I had a no time on my first one, and I had a good steer. I salvaged something.”

“I have been real stagnant,” Knowles said. “The wheels came off in July and that put me in a situation where I am behind. Momentum right now is big. Hopefully making a good run tonight propels me up.”

Contestants in the tie-down roping, barrel racing and bull riding, who waited out the storm, resumed action at 10 p.m.

Canadian cowboy Dawson Hay took a Canadian horse for a wild ride Friday night, earning an 86-point ride on the back of Arriving Kamloops to take the lead in the event.

“You never know what he is going to do,” Hay said of the horse. “I’d seen him all year, and I was lucky to draw him. I knew if I got him rode, I could do good. I always like to get on Calgary (Stampede) horses. I’d gladly ride him again.

“It’s been quite the year,” Hay said. “I had some stuff to iron out, but I’m with a great group of guys (Zeke Thurston and Jake Watson) and they have taught me a lot.”

Peebles had torn his oblique ab muscle in a performance earlier in the summer, and his showing at Farm-City was his first back in the arena since.

“I’m feeling good,” he said. “This is an awesome rodeo to come back to. I couldn’t have picked a better way to start back up again.”

Peebles was one of four cowboys who competed in Friday night’s event, and one of only three who finished with a legal ride. Blodgett rider Kirk St. Clair earned a 73, and Pendleton’s own Payton Wright was right behind him at 72. Kevin Lusk, an Ellensburg, Washington, native who stands in the Columbia River Circuit’s top five, failed to earn a score.

“I had a nice horse,” Peebles said of Joker Poker, his Friday night ride. “I wish I could’ve broken a little earlier, but we set up nice and I got a good ride out of him.”

Peebles currently holds the No. 19 position in the Pro Rodeo Cowboy Association World Standings with $49,161.25. After Friday, he’ll be able to add a $100 bonus and a bottle of Chute Eight Whiskey to those earnings.

“This is a great rodeo,” Peebles said. “The horses are phenomenal, and so are the crowds.”

Only three teams posted qualifying rides during Friday’s team roping event, and in the end, there was no beating the local representation.

Hermiston duo Andy Carlson and Tyler Smith lassoed their calf in 5.5 seconds to win the night’s event. Spencer Mitchell of Orange Cove, California, and Cody Doescher of Webbers Falls, Oklahoma, initially finished at 5.3 seconds to take over the leader board’s top spot, but a crossfire penalty nullified the time.

Smith recently moved to Hermiston while Carlson owns Concrete Northwest, making the victory in front of an arena packed with locals all the more satisfying.

“It’s neat,” Carlson said. “We work with some of (Farm-City’s) bigger sponsors on a daily basis. It’s good to do so well in front of them. I don’t know if this will be worth much money, but it is worth the whiskey and $100.”