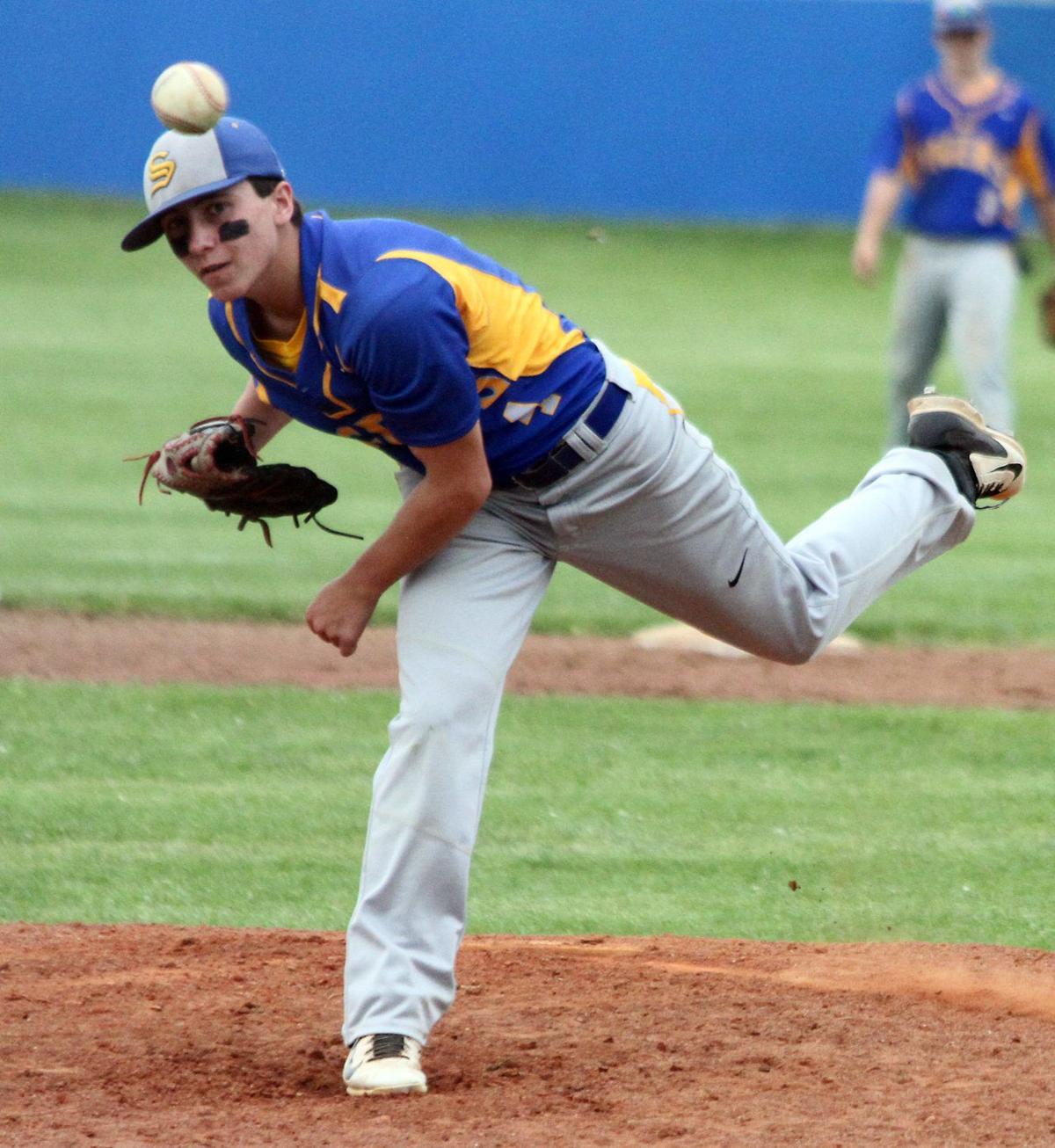 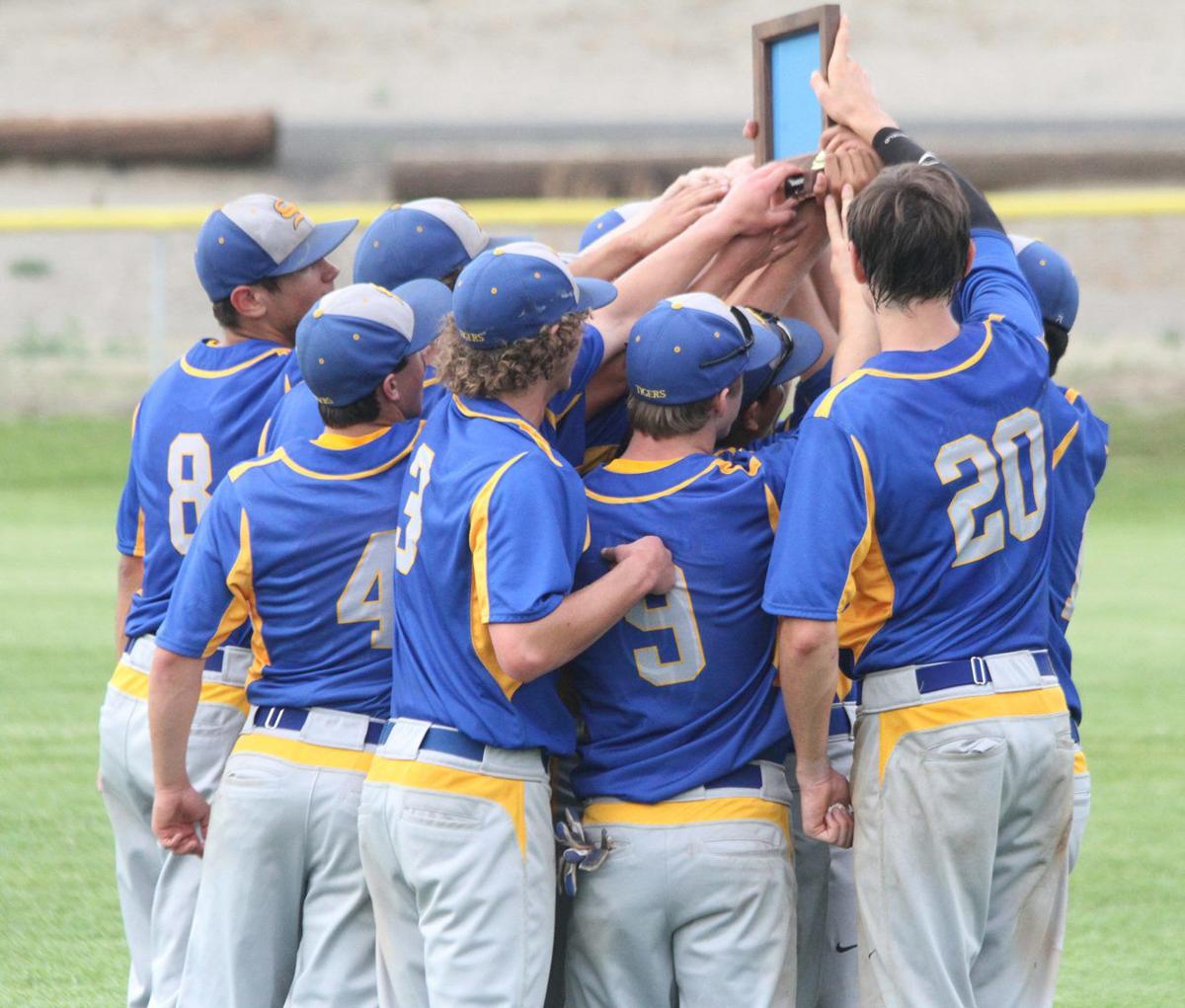 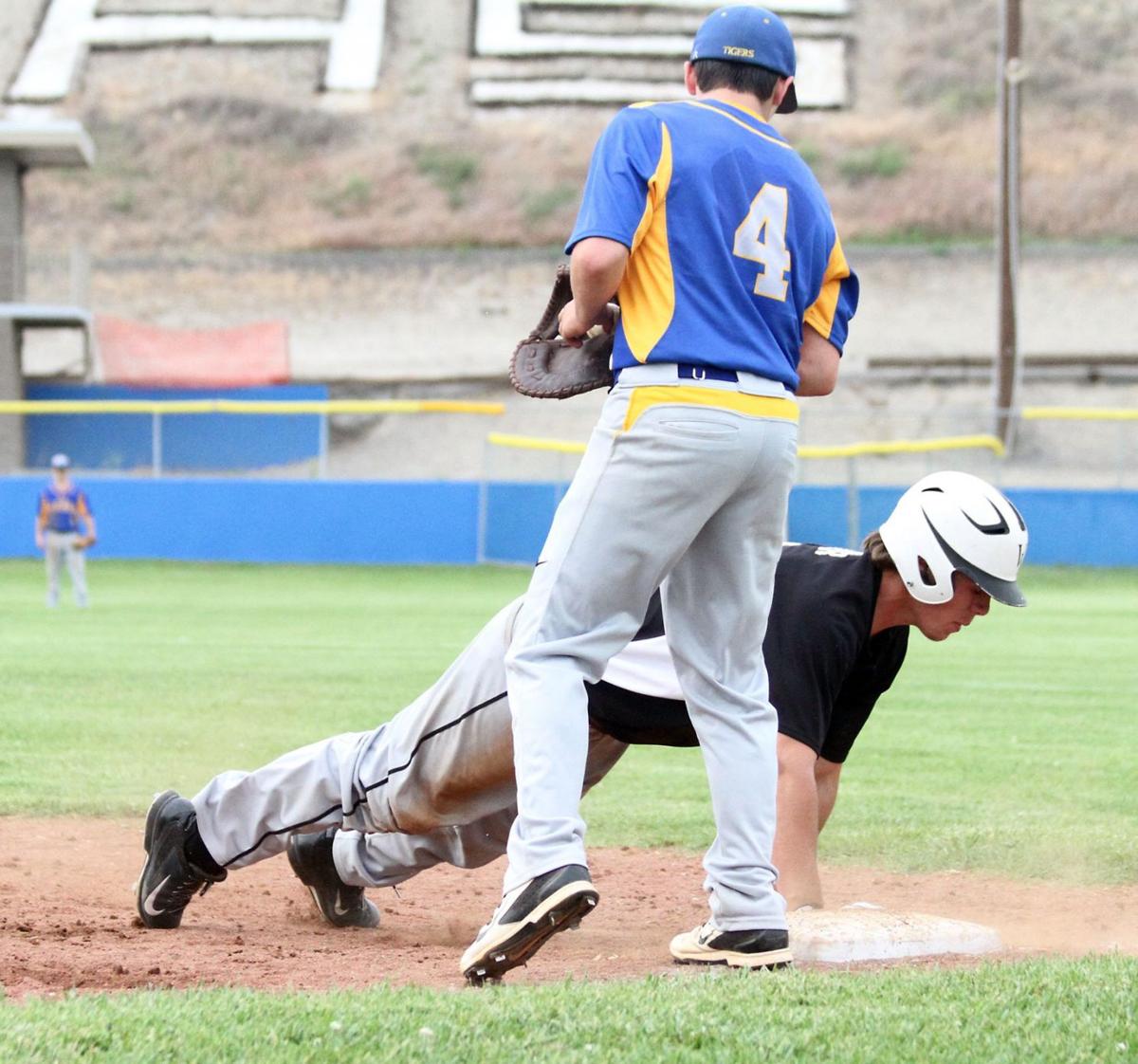 Stanfield first baseman Klay Jenson checks on Vale's Andrew Weber after a pick-off attempt in the seventh inning of Stanfield's 3-1 win. The victory earned the Tigers their second district title in as many years. 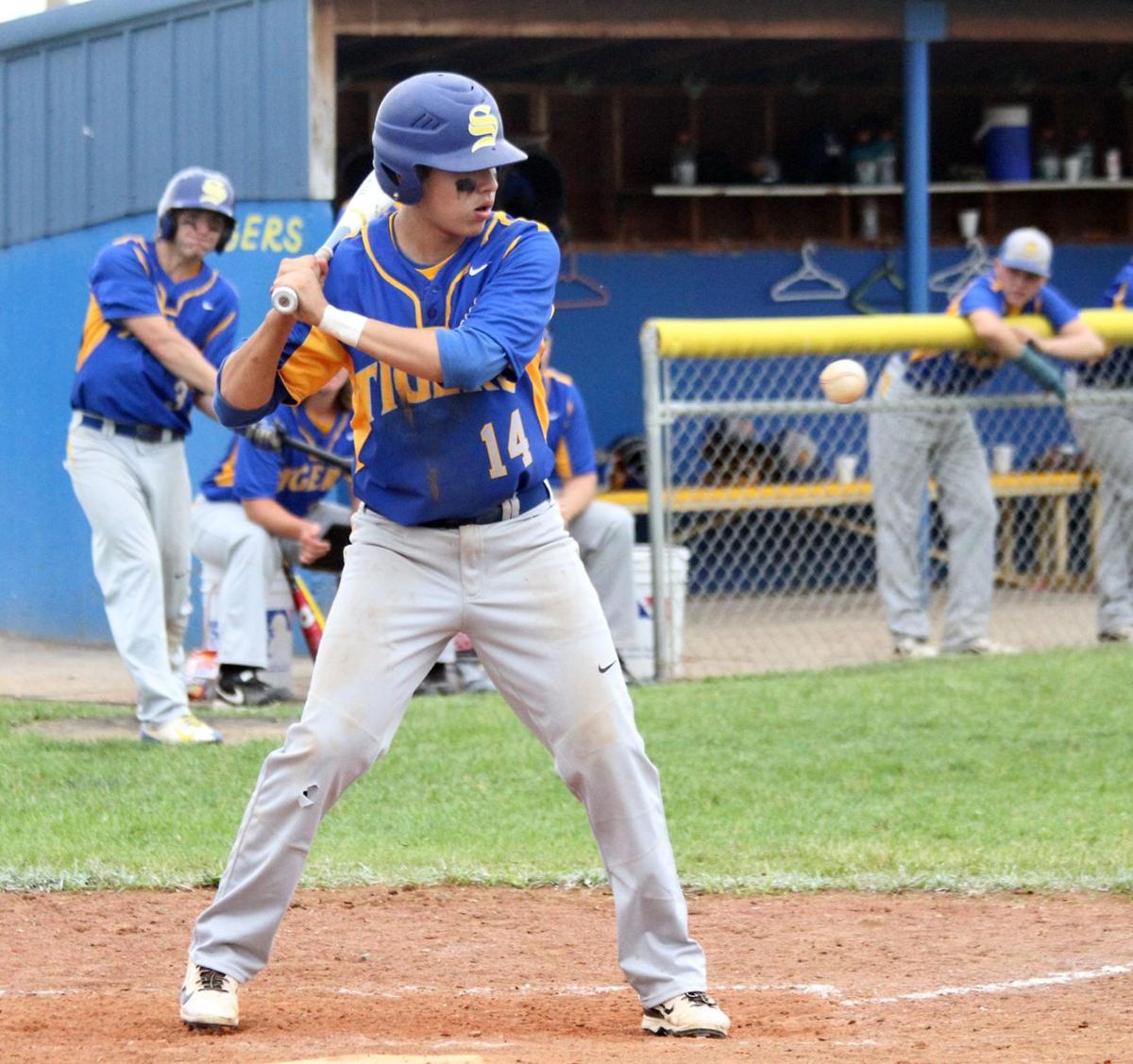 Stanfield shortstop Tony Flores watches a pitch go by during the fifth inning of the Tigers' 3-1 win over Vale Friday in Stanfield. Flores would walk in a run on the at-bat.

Stanfield first baseman Klay Jenson checks on Vale's Andrew Weber after a pick-off attempt in the seventh inning of Stanfield's 3-1 win. The victory earned the Tigers their second district title in as many years.

Stanfield shortstop Tony Flores watches a pitch go by during the fifth inning of the Tigers' 3-1 win over Vale Friday in Stanfield. Flores would walk in a run on the at-bat.

STANFIELD — In it’s opening district game, the Vale Vikings hung 20 runs on the Nyssa Bulldogs, setting up a potential shootout with the host Stanfield Tigers, but Klay Jenson had other ideas.

The sophomore lefty threw six innings of one-run ball, allowing just five hits and fanning seven in a 3-1 win over Vale Friday afternoon. The win clinches Stanfield’s second Eastern Oregon League district crown in as many years. With the win the Tigers have a state playoff game at home next week locked up. Stanfield (20-7, 9-1 EOL) will likely grab the No. 7 seed.

Tony Flores, who went 2-for-3, Ryan Bailey, who was 1-for-4, and Dylan Grogan, who it 2-for-3, also scored RBIs for the Tigers Friday, and Flores, Thyler Monkus and Hunter Barnes each scored runs. Jenson earned the win on the mound, and Bailey entered in the seventh and shut the door to earn the save.

“They deserve it,” he said of the district title. “They put in a lot of time,”

The win gives Stanfield a chance to make up for last year when the Tigers claimed the league title and district championship but lost Harrisburg in a home playoff game.

The Tigers have now won nine of 10 games and five straight, and Jenson said he would put his team up against anybody’s at this point.

“We’re solid. Hopefully we go far this year,” he said. “That’s what we wanted. We had goals: league champs — got that, district champs — got that. We’re trying to go for final four. We’re playing good right now.”

VALE 11, ECHO 3 — At Vale, coming off a thrilling walk-off win over Elgin, the Echo softball team was unable to summon enough heroics to knock off Vale in the Eastern Oregon League championship.

The No. 1 seeded Vikings (18-8) pulled away with five runs in the bottom of the fourth inning and Echo’s bats went, resulting in only one base runner for the Cougars (17-9) the rest of the way.

No player recorded more than one hit for Echo, but Monique Montoya continued a productive tournament by driving in Bailey Srofe and Kenzie Blankenship with a double in the third inning to put Echo briefly ahead 3-2.

The Cougars had already qualified for the state postseason, and will open the first round on Wednesday. Their opponent will be determined by the OSAA rankings, which had Echo No. 9 at press time.

The official bracket will be posted on OSAA.com at 9 a.m. on Sunday.

ECHO 8, ELGIN 5 — At Vale, after allowing four runs to tie the score at 5-5 headed into the bottom of the seventh, Echo pitcher Mackenzie Gonzales gave the Cougars the win with a three-run walk-off home run.

Elgin (12-11) got two quick outs to start the inning, but Bailey Srofe and Monique Montoya drew back-to-back walks to bring Gonzales to the plate.

Srofe and Montoya combined to score five of Echo’s runs in the game. Srofe walked four times while Montaya was 2 for 3 with two RBIs.

Samantha McQuown also drove in a run and Gonzales, who struck out eight and allowed no earned runs, finished with four RBIs.

WESTON-MCEWEN 14, BURNS 0 — At Union, after rain in La Grande forced a change in venue, the TigerScots poured it on the Hilanders to earn a state playoff berth on Friday.

Playing in the Special District 6 third-place game, Jessica Lambert combined with a flawless defense for a no-hitter and the TigerScots came through with timely hits for a five-inning win.

Lambert struck out eight and walked none, and got some great plays in the field behind her.

Second baseman Charmayne Bennett had one of them to end the fourth inning, ranging far into the gap at second base to snag a hard grounder and throw out the runner at first.

Lambert hit a two-run home run in the second inning, and Taylor Entze hit a three-run shot in the third.

Burns had defeated Irrigon earlier in the day to earn the right to face Weston-McEwen, but no details were reported.

The Union Bobcats and Pilot Rock Rockets were slated to play for the district championship later in the day, but called off their game due to weather concerns. No make-up will be played, with Union taking the No. 1 seed from the district to state.

ST. HELENS 1, HERMISTON 0 — At St. Helens, the Bulldogs were eliminated from the 5A baseball postseason with a 1-0 loss on Friday in the play-in round.

Details from the game were not reported.