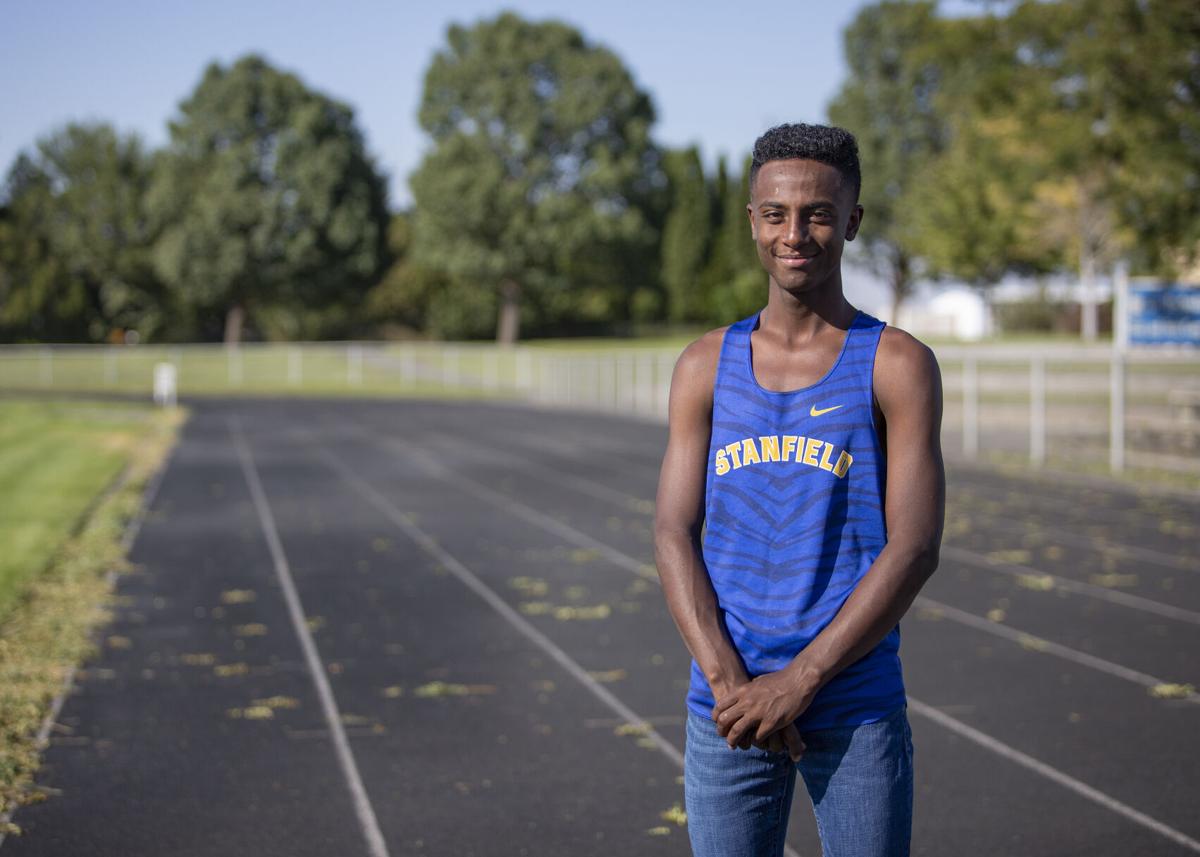 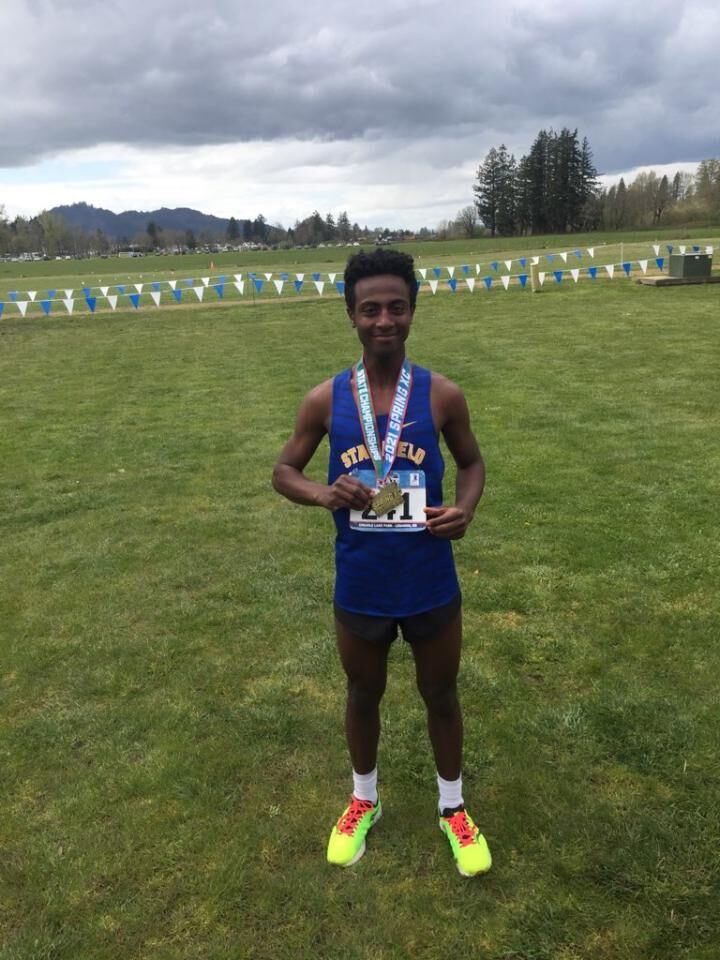 Stanfield's Sisay Hurty poses for a picture after winning the 2A/1A state title at Cheadle Lake Park in Lebanon on Saturday, April 10, 2021. 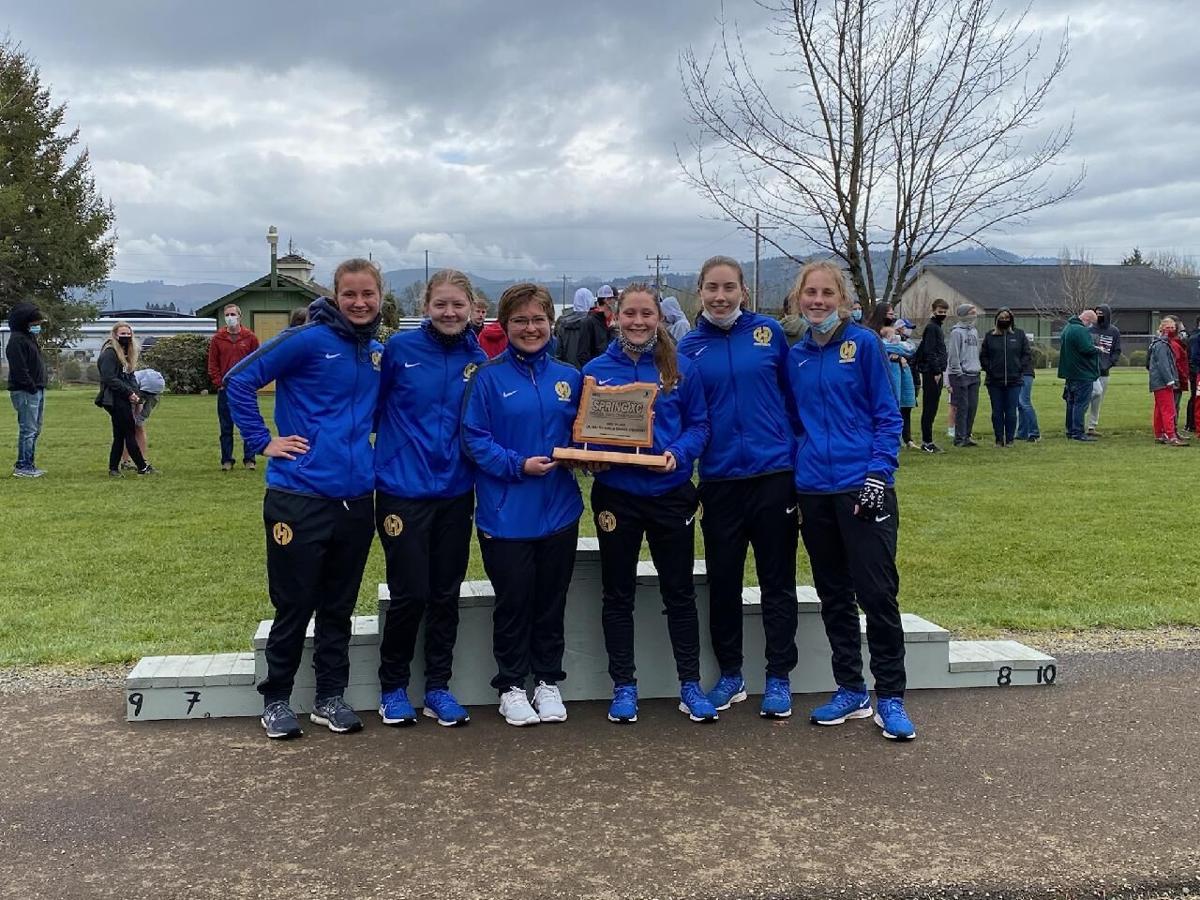 Stanfield's Sisay Hurty poses for a picture after winning the 2A/1A state title at Cheadle Lake Park in Lebanon on Saturday, April 10, 2021.

LEBANON — There is a perk to being a state champion — you get to pick where the team will eat its post-race meal.

The Stanfield senior crossed the finish line in a personal best 16 minutes, 25.99 seconds over the 5,000-meter course, surprising even himself.

“I was just trying to get into the top 10 and beat Trevor (Nichols of Heppner),” Hurty said. “Then I beat everyone. I wasn’t expecting to win.”

Hurty started out the race in the top pack of runners. Midway through the first of two laps around the park, Hurty and two other runners had separated themselves from the pack.

Hurty is the first Stanfield runner to win a state cross-country title.

Hurty qualified for the state cross-country meet his junior year, finishing 13th in a field of 75 runners in a time of 16:53.10.

Hurty now will turn his attention to track, where he has his sights set on the school’s 1,500 and 3,000 records, both of which are held by Troy Blackburn.

Nichols, a sophomore, who finished ahead of Hurty at the district race the week before, finished fifth in a time of 16:49.55. The Mustangs finished ninth in the team standings with 197 points.

In the girls 3A/2A/1A division, the Heppner girls finished third in the team standings with 83 points, just two behind Enterprise. Bandon won the team title with 46 points.

Leading the Mustangs was senior Madelyn Nichols, who finished 12th in a time of 21:02.47. Nichols has signed to run at Eastern Oregon University.

Following Nichols was junior Hailey Heideman, who was 26th in a time of 22:07.61

Columbia Christian junior Makena Houston won the state title, crossing the finish line in a time of 18:24.33 — well ahead of second-place Cristin Brethower of Yamhill-Carlton (19:42.88).