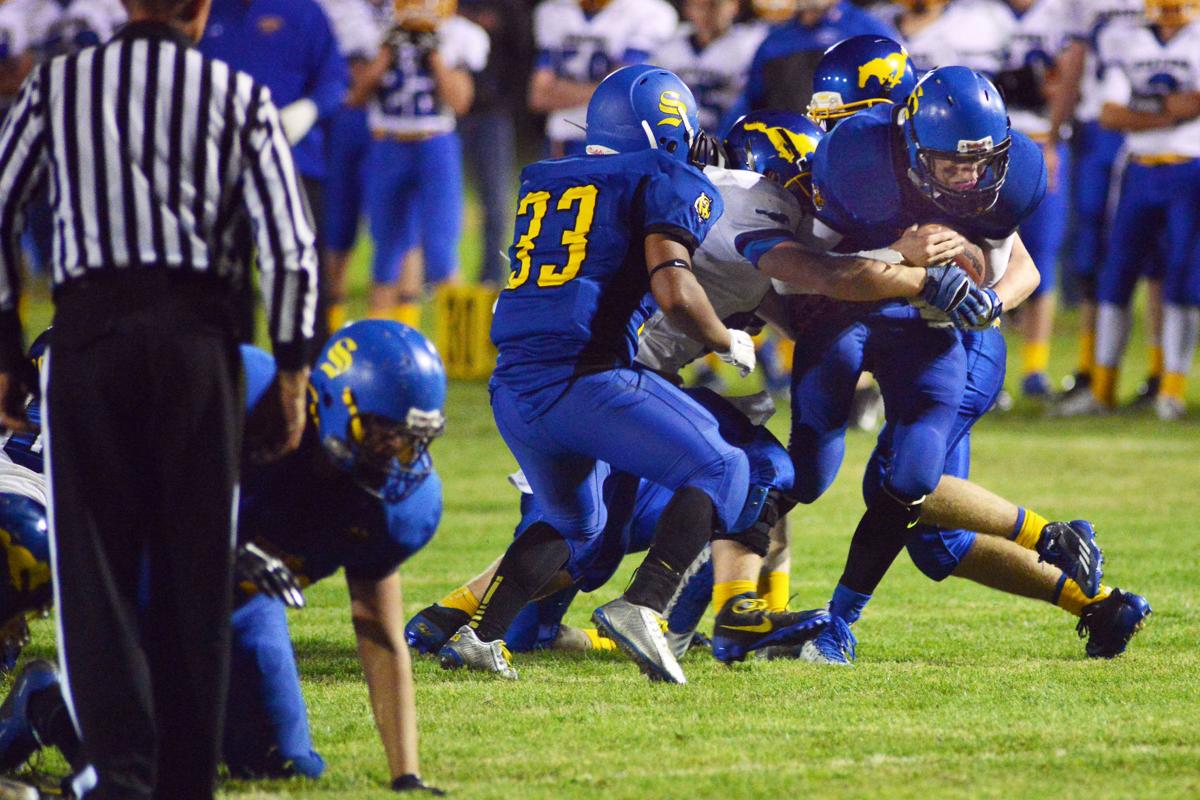 Staff photo by E.J. Harris Stanfield quarterback Dylan Grogan gets wrapped up by a pair of Heppner defenders in a game in Stanfield on Friday, Oct. 16, 2015. Grogan leads the No. 9 Tigers against No. 1 Central Linn in the 2A state quarterfinals on Friday. 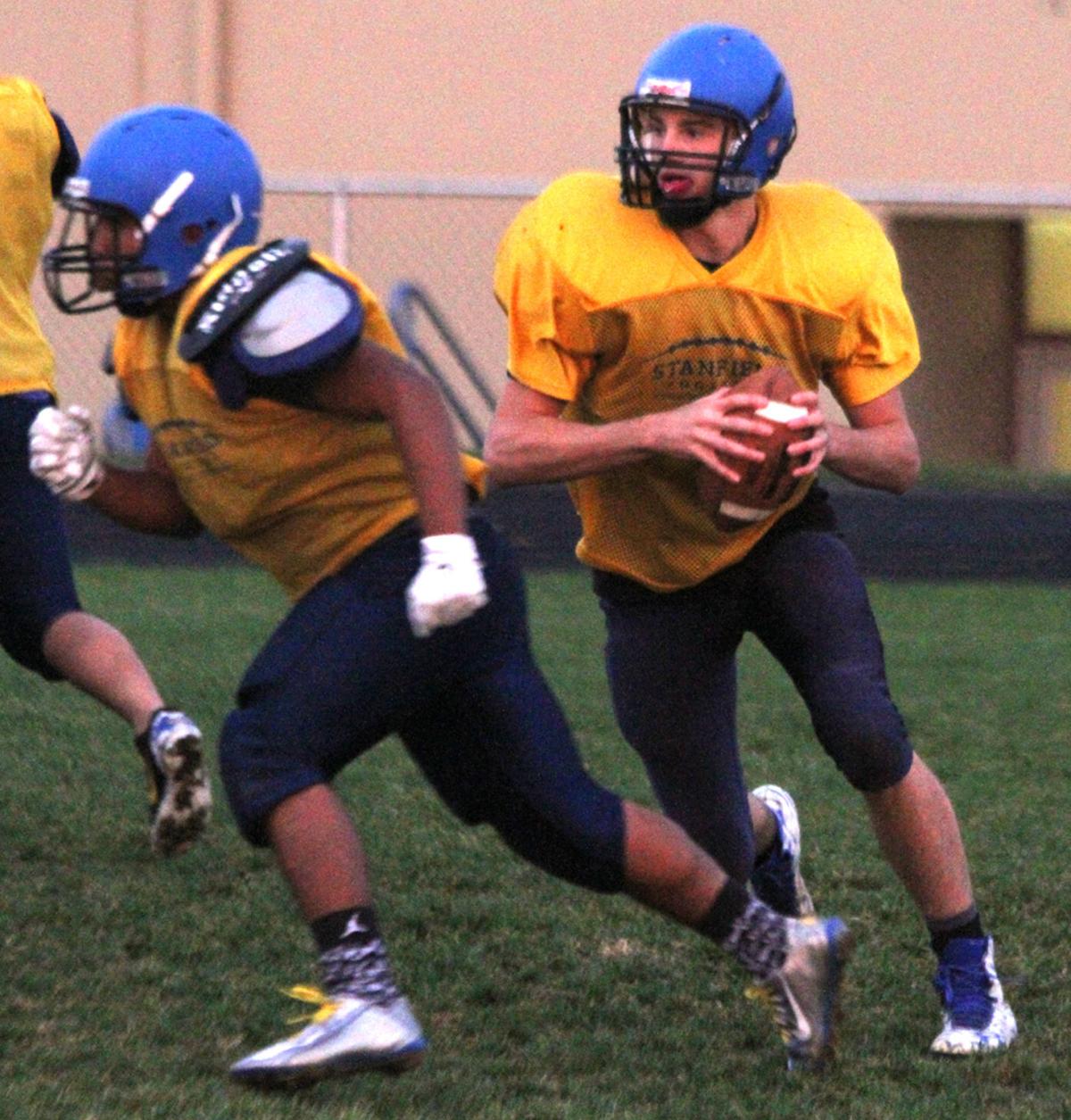 Stanfield quarterback Dylan Grogan (center) leads the No. 9 Stanfield Tigers into Central Linn to play the No. 1 Cobras in this Friday's 2A quarterfinal football game. 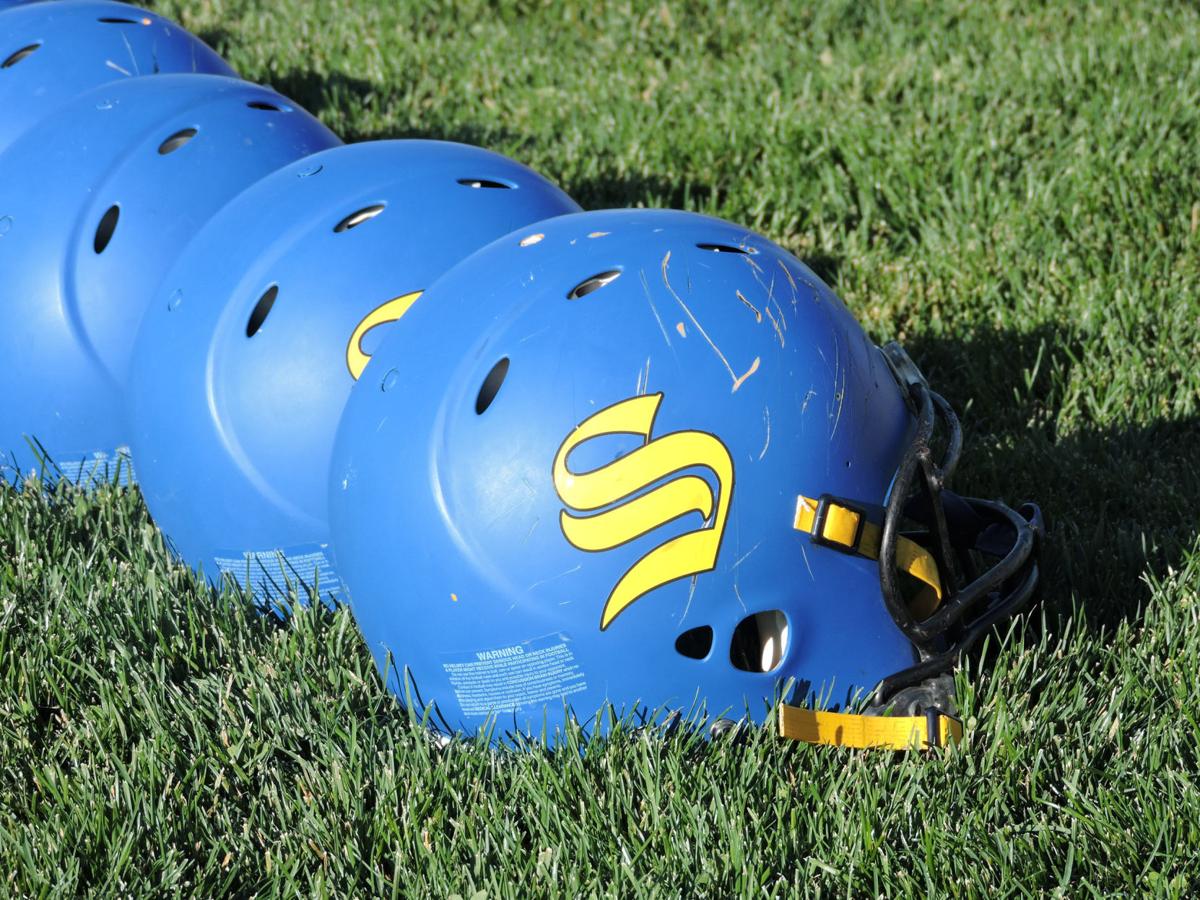 Staff photo by E.J. Harris Stanfield quarterback Dylan Grogan gets wrapped up by a pair of Heppner defenders in a game in Stanfield on Friday, Oct. 16, 2015. Grogan leads the No. 9 Tigers against No. 1 Central Linn in the 2A state quarterfinals on Friday.

Stanfield quarterback Dylan Grogan (center) leads the No. 9 Stanfield Tigers into Central Linn to play the No. 1 Cobras in this Friday's 2A quarterfinal football game.

For its first-round playoff game, the Stanfield Tigers traveled to the dense forests of northwest Oregon to play the Vernonia Loggers and had to recalibrate its defensive scheme against the high-octane passing attack employed by the Loggers.

For their quarterfinal match-up, the No. 9 Tigers travel further south to No. 1 Central Linn, where they will face a more familiar offensive attack when the two teams kick off in Halsey at 7 p.m. Friday night.

The Cobras run a ground game eerily reminiscent of the Tigers’ Wing-T scheme, and they’re ready to go toe-to-toe.

“My kids are hungry,” Stanfield head coach Davy Salas said. “Since we’ve been together, we told ourselves we want to go play for a state championship. That’s been our goal for these guys. That’s what we want to do. We’re going to go play the games on our schedule, and if we play a great game we’ll come out on top.”

In preparation for the Cobras, Stanfield isn’t changing anything. But that’s been the modus operandi of first-year coach Salas since he took over before this season. The first time he addressed his team, he told them he isn’t interested in sexy big-play football. He wanted to play “man-on-man, hat-on-hat” football and run between the tackles.

The Tigers have done just that this season.

Junior running back Thyler Monkus has three games of 200 or more rushing yards, and he’s eclipsed 100 in every game but two. In total, Monkus has rushed for 1,353 yards on 153 carries for a an 8.8 yards per carry average and 20 touchdowns.

Quarterback Dylan Grogan, also a junior, has added another element to the rushing game with his size and athleticism, giving Stanfield a legitimate short down option. He’s rushed for 976 yards on 123 carries (7.9 ypc) and 21 touchdowns. He’s also passed for nine touchdowns on 44-of-62 passing for 708 yards.

But the Tigers have other options, as well. Makiah Blankenship has 449 yards on 87 attempts and four touchdowns, and Justin Keeney has 400 yards on 59 carries and four scores.

Both Stanfield and Central Linn come from tough leagues, setting them both up for potentially deep playoff runs. Stanfield hails from the Columbia Basin Conference, which at one point in the season had three teams at 5-0 and a fourth at 4-1. The CBC sent four teams to the playoffs this season, with just league champ Heppner and Stanfield advancing rounds.

Meanwhile, Central Linn calls the five-team Tri-River Conference home. There, the Cobras dropped just one game — a 35-18 loss to league champ Regis — and still managed to win the league and take the top seed in the bracket.

Statistically, Stanfield’s offense is better than Central Linn’s but the Cobras have a better defense. The Tigers have scored 409 points so far this season, the third most in the state behind Heppner (501) and Vernonia (500), who Stanfield beat 56-26 last week. Central Linn, though, has demonstrated a stout defense by allowing just 14 points per game this season, including two shutouts.

Stanfield is going to need to do something like that to keep Central Linn’s big-play on-the-ground offense on the sideline.

Senior Alex Pettner leads the way for Central Linn with 1,117 yards on 164 carries (6.8 ypc) for 13 touchdowns. Hiss 23-carry, 187-yard game in the Regis loss was the most productive rushing game by a single Cobra this season. But Braden Nightengale and his 11.4 yards per carry average will have to be accounted for, as well. The junior has carried just 74 times for 845 yards — second-most on the team — and 11 touchdowns. Chandler Jeppson (619 yards, 8 TDs) and quarterback Jesse Wibbens (504 yards, 7 TDs) are also viable options to run. Wibbens has also passed for 483 yards on just 20-of-34 passing for 10 scores and one interception.

Salas is confident in his bunch.

“I respect everybody,” Salas said. “But I’m not scared of anybody.”