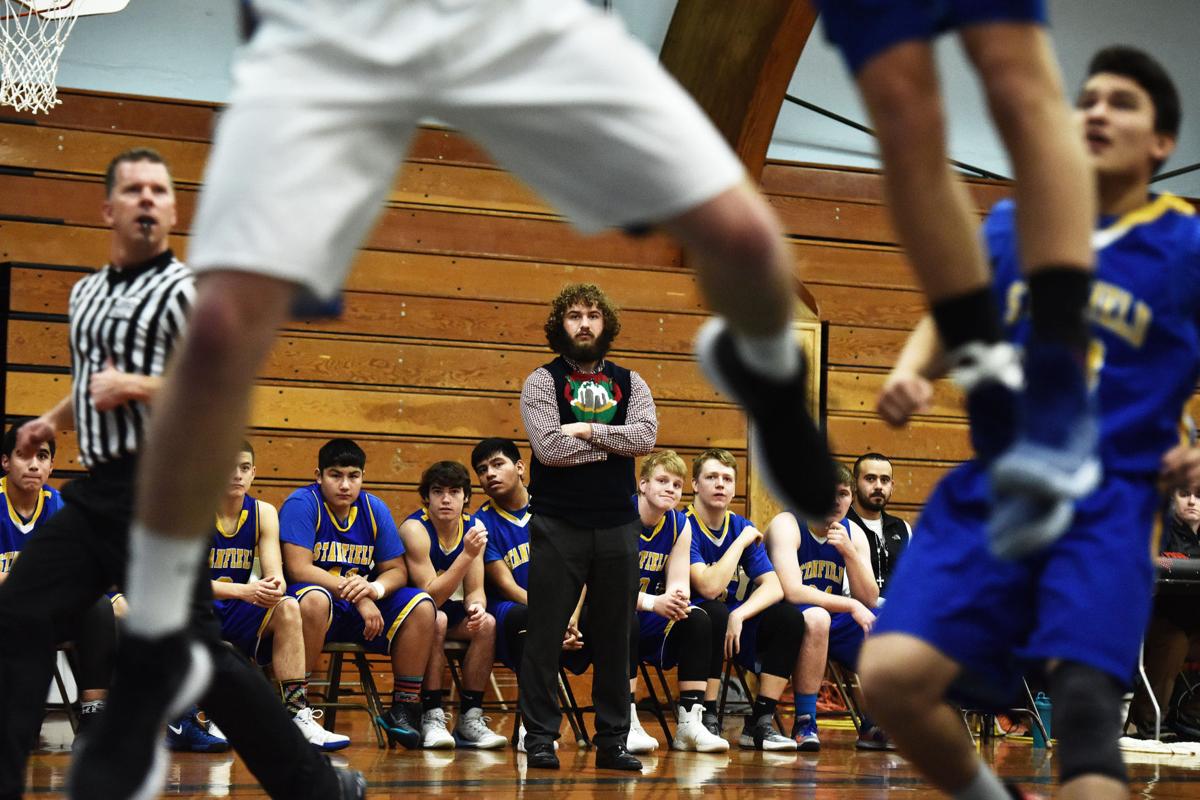 Staff photo by E.J. Harris Stanfield head coach Devin Bailey watches the action during the Tigers' 61-58 win against Arlington at the Columbia River Clash on Thursday in Umatilla. 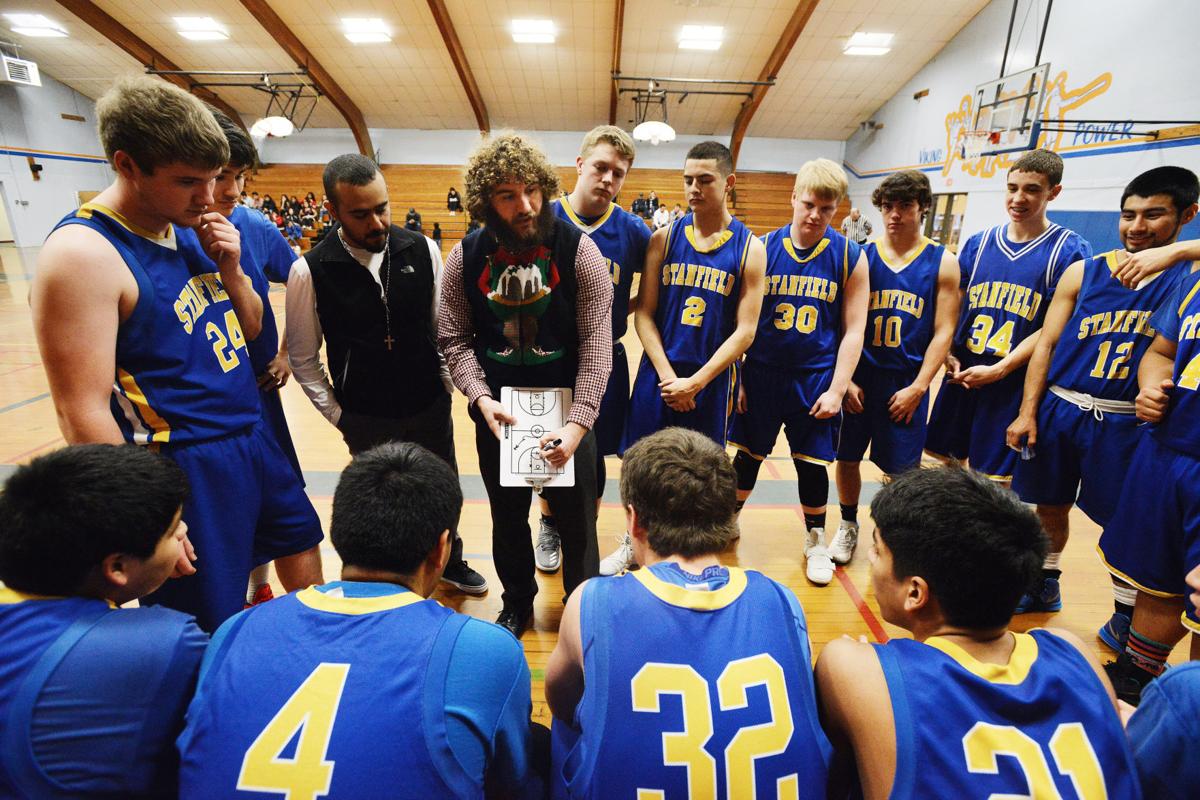 Staff photo by E.J. Harris Stanfield head coach Devin Bailey draws up a play during a time out during the Tigers' 61-58 win against Arlington at the Columbia River Clash on Thursday in Umatilla.

Staff photo by E.J. Harris Stanfield head coach Devin Bailey watches the action during the Tigers' 61-58 win against Arlington at the Columbia River Clash on Thursday in Umatilla.

Staff photo by E.J. Harris Stanfield head coach Devin Bailey draws up a play during a time out during the Tigers' 61-58 win against Arlington at the Columbia River Clash on Thursday in Umatilla.

The defending runner-up boys basketball team jumped out to a early five-point lead in the game, which took place during the first day of the Columbia River Clash in Umatilla.

Trying to protect that lead, junior Eddie Nunez charged toward the basket and was fouled.

On the opposite end of the court, as soon as Nunez’s free throw attempt caught the net, a man with a grizzly beard — in a outfit you would peg for an ugly sweater party — threw his hands up and cheered with a big smile on his face.

It wasn’t a parent, or even a fellow high schooler — although he’s not far removed from his Tiger days. It was first-year head coach Devin Bailey, 23, who was put in charge after Jason Sperr left and took with him practically the entire roster.

Nunez’s free throw capped off an 11-8 run by Stanfield and started an exciting last six minutes of the first half, during which the lead changed three times.

After a tough 32 minutes of play, the Tigers (2-4) needed a few more ‘heck yeah’ moments to hold off the Honkers for the 61-58 victory. The only varsity returner, senior Brody Woods, led the way.

To Bailey, the effort hinted at improvement. After a second place finish in Class 2A last season with an impressive 22-2 record, Stanfield graduated 10 of the 11 regulars on the varsity roster — one of whom was Bailey’s younger brother, Ryan.

“We’ve just got to keep getting better as a team, that was a close game and we should have won by more,” Wood said. “We just need to focus on the next game because Pilot Rock is a league game so it’ll show us. We’ve already played a league team in Culver so it’ll show us what league is like.”

That game versus Culver at the Sherman Invitational in Moro was the first time the Tigers got to see Bailey’s extensive sweater collection.

“I do have probably 10-15 Christmas sweaters,” he said. “I wore it one time because they just weren’t having fun, so I wore it against Culver and we had some fun and we won so I figured I might as well wear it again. I’ll probably have an array of them throughout December anyways.”

Bailey is working to continue the recent winning tradition of Stanfield athletics, using an almost entirely new team made up of three sophomores, five juniors and four seniors.

“It’s hard,” Woods said. “There’s a lot of growing up for those kids to do because they don’t know, they don’t have the varsity experiences. Elias (Esquivel) ... he’s getting way better though, he’s improved so much. It’s incredible how much he’s improved. Everybody just needs to keep following in his footsteps, I think.”

Esquivel had an impressive outing against Arlington. All three of his baskets were 3-pointers, and the ball was in his hands during the final seconds as Stanfield clung to a two-point lead.

It was the returning duo who clinched the win for the Tigers.

The Honkers had missed a lay-up to tie the game after back-to-back Stanfield turnovers. Arlington got the ball back and called a timeout to catch their breath. There were 7.7 seconds remaining as they readied to inbound the ball.

Woods did just that and as the ball fell into the hands of Arlington senior Brent Troutman, who stepped back to attempt another three, Woods used his 6-foot 5-inch frame to block the shot. Esquivel was there to recover the ball and secure at least a tie with a final free throw.

Esquivel was nervous, he admitted after the game — he didn’t want to give Arlington’s productive shooters a chance to tie or win. He made the first and when the second missed and bounced Arlington’s way off the rim, the Honkers didn’t have enough time to execute their final play.

The win was a testament to the potential Bailey sees in the team, which he stresses in no way “rebuilding.”

“Even though we’re young, we’re not rebuilding,” he said. “This is not a rebuilding year by any means and that’s what we’re trying to keep off of us because we owe it to our seniors to have a good year and I really think once we click we’re going to be a dominating force.”

Stanfield’s recent domination, and the expectations of Tiger athletes, are something he knows well.

Bailey spent grades K-12 in Stanfield, and left to continue his education at Eastern Oregon University. He didn’t play or coach basketball, but he knew one day he wanted to come back to Stanfield to teach and now take the helm of the boys basketball team.

“Everything in my life has kind of fallen into place,” Bailey said. “So when (a teaching position) opened up I was like, ‘I want to go home.’”

There are three generations of Baileys in Stanfield and Bailey’s wife’s family is also from the town with roughly 2,000 residents.

“I just love it, the community is — I’ve never been in anything like Stanfield,” he said. “Nothing has ever came close. My high school upbringing was just so much fun that I kind of wanted to go back and try to give these kids the same thing I experienced.”

Stanfield will continue to compete in the Columbia River Clash through the weekend, and face Pilot Rock at 3:30 p.m. Friday.