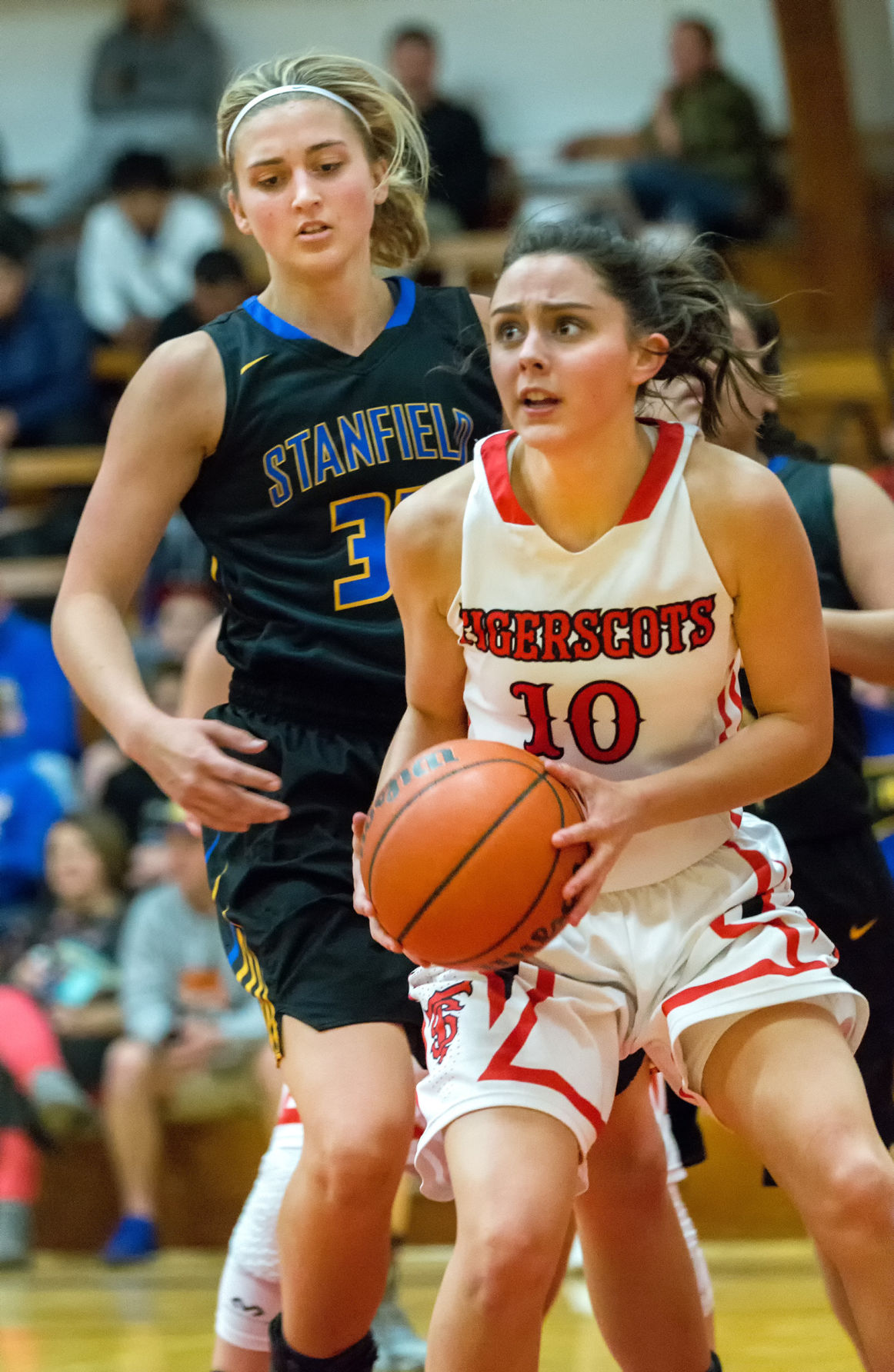 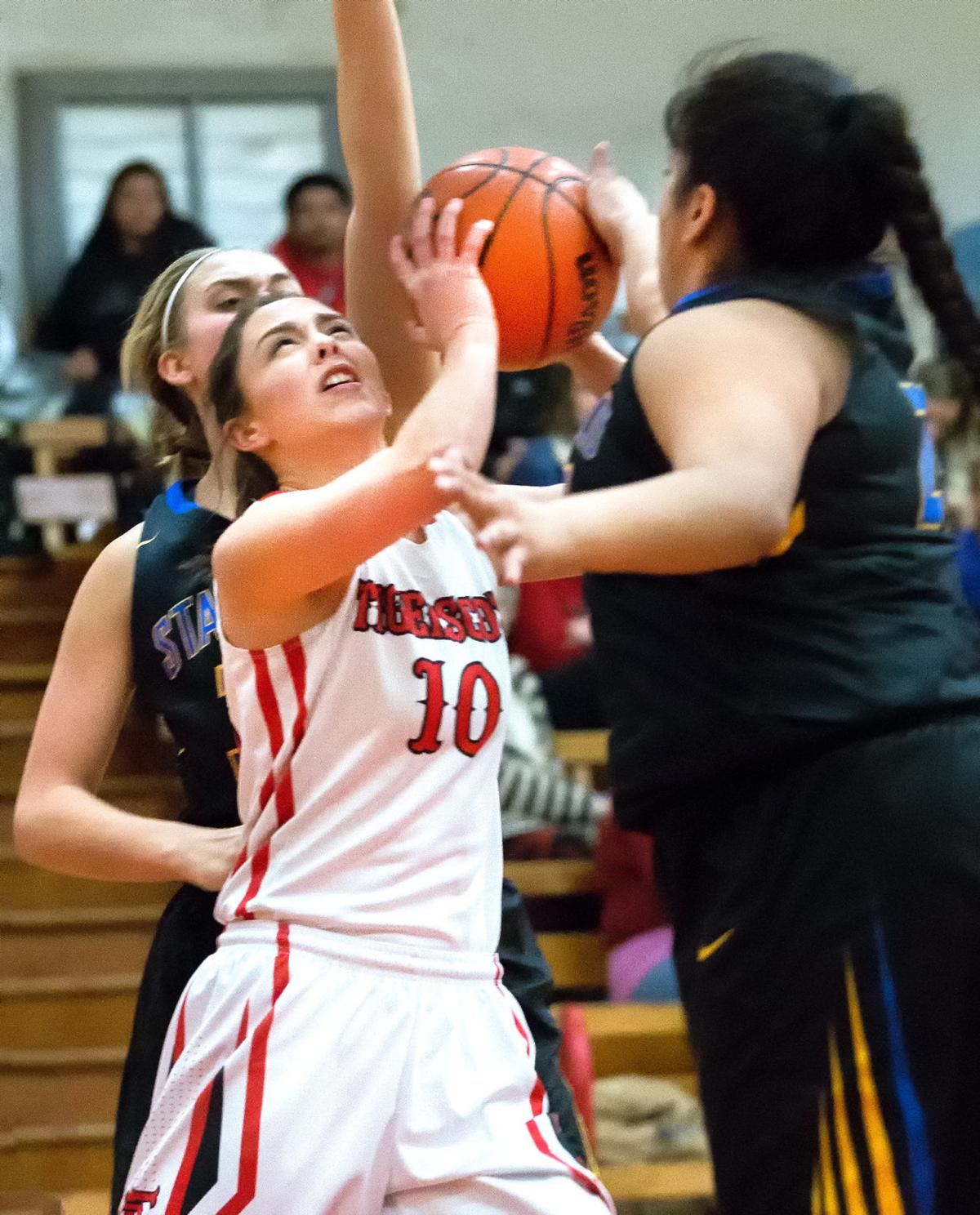 Staff photo by Kathy Aney Stanfield's Natalia Esquivel gets a hand on the ball as Sara Von Borstel (10), of Weston-McEwen, tries to shoot during Saturday's Columbia Basin Conference game in Athena.

Staff photo by Kathy Aney Stanfield's Natalia Esquivel gets a hand on the ball as Sara Von Borstel (10), of Weston-McEwen, tries to shoot during Saturday's Columbia Basin Conference game in Athena.

ATHENA — After a tough, close loss on the road against Pilot Rock on Friday night, the Weston-McEwen girls basketball team was determined to redeem itself against Stanfield on Saturday.

The TigerScots’ determination turned into results right away as they outscored Stanfield by 18 points in the first quarter on their way to a 57-32 victory in a Columbia River Conference game.

“I think the girls really wanted, almost like a do-over,” Weston-McEwen coach Eric Jensen said. “I think they just wanted to regroup, reset and just go and I could tell when I walked into the gym today there was just a different air. The girls played really well tonight doing things better on offense and defense that they’re certainly capable of doing.”

Junior point guard Chelsea Quaempts scored a game-high 25 points for Weston-McEwen (10-5, 2-1 CBC), with 19 of those points coming in the first quarter.

“I was on fire and I could just feel it,” Quaempts said afterwards. “My last game I was kind of out of whack and I felt I needed to step it up tonight as a captain and contribute to the team the best I can.”

Jensen said Quaempts’ performance was what he’s come to expect from the junior.

“She’s our playmaker and she does it offensively, and a lot of it on the defensive end she just creates so much havoc,” Jensen said. “I don’t know how many lay-ins she had off of steals tonight but that’s just what she does.”

Stanfield (3-11, 1-3) was able to weather the storm a bit through the middle parts of the game, outscoring Weston-McEwen 22-18 over the second and third quarters. It left the TigerScots with a 45-27 lead and the Tigers holding momentum.

But between periods, Jensen said he encouraged his team to just keep playing hard on defense and it would help create offense.

“When you play good defense it usually sparks the pace of the game and once the girls refocused a bit they kind of took it over from there,” Jensen said. “It’s a really smart group of girls and they always know what to do and when to do it.”

The TigerScots did just what Jensen said and pressured Stanfield’s ball handlers in the half-court, resulting in numerous turnovers and fast-break lay-ins. Weston-McEwen outscored Stanfield 12-5 in the fourth quarter to seal the victory.

Stanfield’s offense was led by Natalia Esquivel with 13 points and Kendra Hart had 11 points. Also reaching double-digits for Weston-McEwen was Katie Vescio with 12 points.

Weston-McEwen is now tied for second in the league with Pilot Rock, with only first place Culver yet to play in the first round of league play. Jensen said that his team will need to focus on how to handle ball pressure this week in practice to prepare for Friday night.

“If we can be confident in our ball handling and make sure we can get past Culver’s initial pressure, I think we should be fine,” Jensen said. “We’ve got good ball handlers and that’s the main focus of the game plan is to handle the pressure and if we attack like we did tonight then good things will happen.”

Stanfield will next host Pilot Rock on Friday.