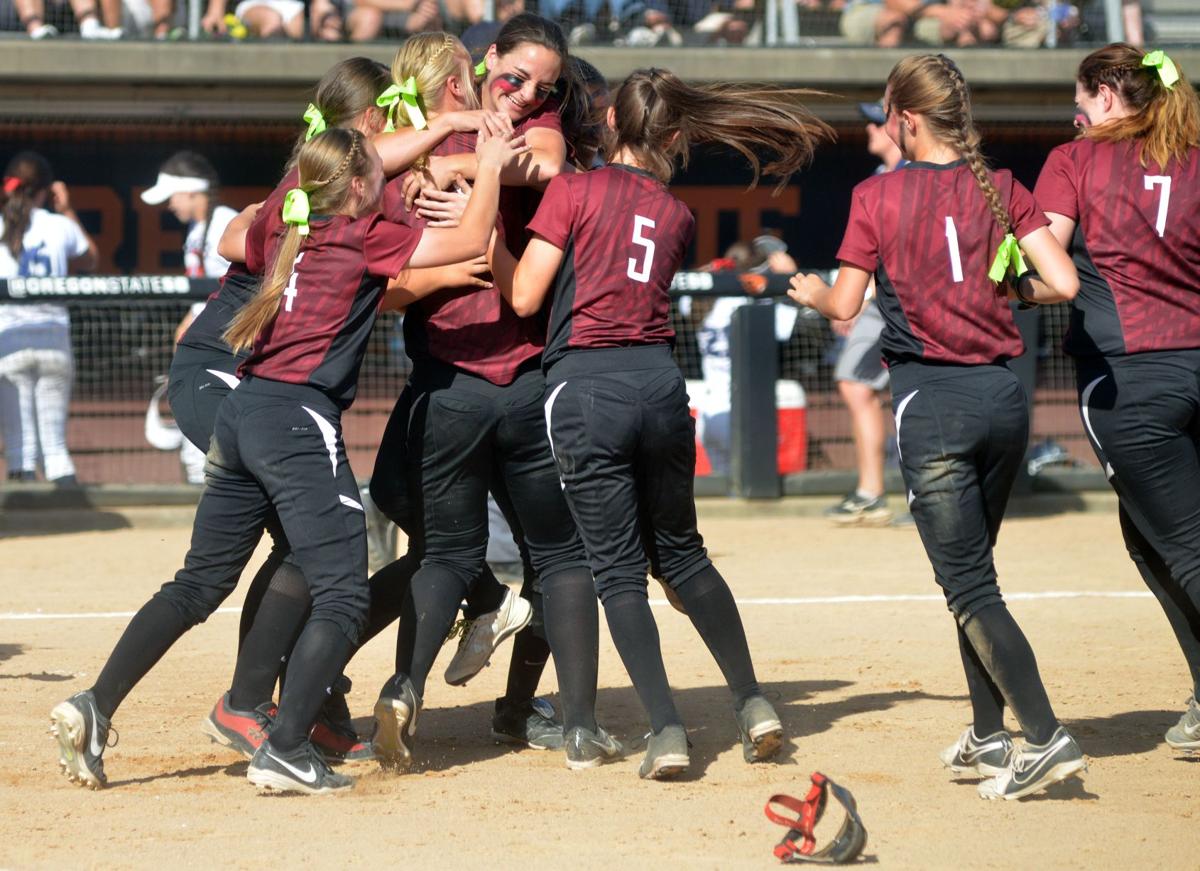 Staff photo by E.J. Harris The Mac-Hi softball team celebrates after the Pioneers' 4-0 win against Banks in the class 4A state softball championship game Saturday in Corvallis. 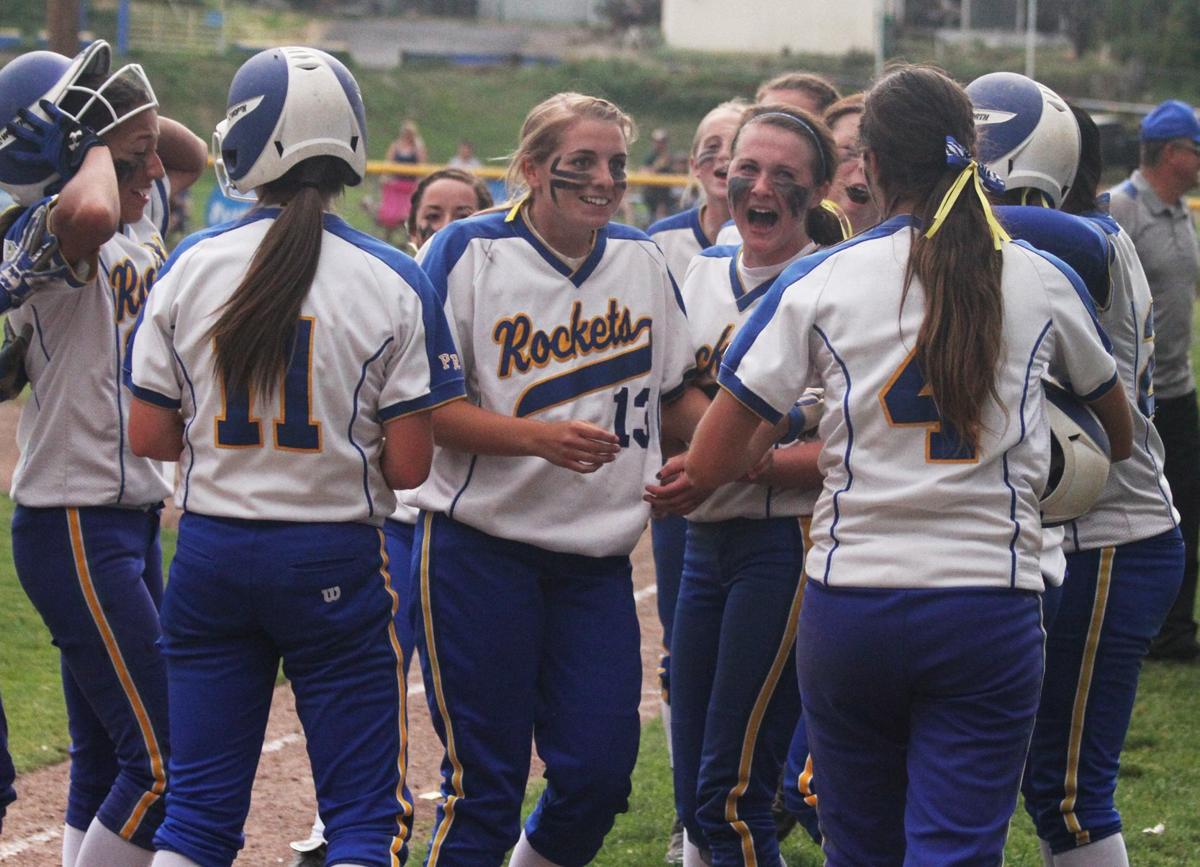 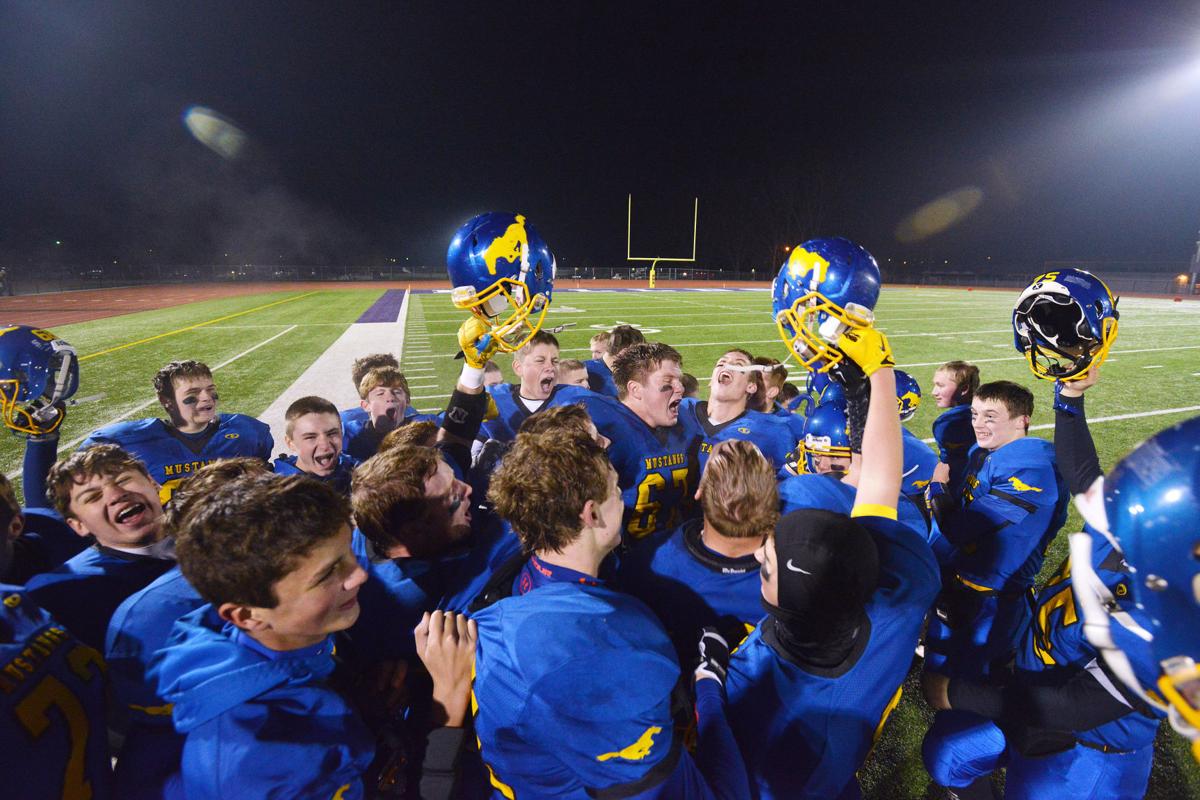 Staff photo by E.J. Harris The Heppner Mustangs celebrate as time runs off the clock in their 48-0 rout against Kennedy in the state 2A championship game Saturday in Hermiston.

Staff photo by E.J. Harris The Mac-Hi softball team celebrates after the Pioneers' 4-0 win against Banks in the class 4A state softball championship game Saturday in Corvallis.

Staff photo by E.J. Harris The Heppner Mustangs celebrate as time runs off the clock in their 48-0 rout against Kennedy in the state 2A championship game Saturday in Hermiston.

Counting down the year in local sports is never an easy task and 2015 was no exception. Record books were rewritten, titles won and program firsts achieved in every season.

New additions to local trophy cases rolled in like so many tumbleweeds as championships were claimed at the state, regional and even national levels by teams in the East Oregonian’s readership.

With just 10 spots to award in our year-end countdown, some tough decisions had to be made and some great moments had to be omitted.

Local impact and historical significance were the two main criteria for these rankings, but other factors like improbability also came into play and in some cases made a huge a difference.

When push came to shove, it was a magical two days in June that ended up stealing the top spot. Championship runs in Autumn accounted for the second and third slots, and a pair of events that occurred within hollering distance in Pendleton rounded out the top five.

1. Softball season ends with bang: It may not be a high profile sport, but softball thrust itself into the spotlight once again in 2015 as four local teams reached their state championships and two claimed titles.

It was an all-EO affair in the 2A/1A title game played June 5 at Oregon State Softball Complex in Corvallis as Pilot Rock met league foe Weston-McEwen for all the marbles.

Pilot Rock came to bat in the bottom of the seventh inning locked in a 2-2 tie, and the Rockets secured the state title when Tehya Ostrom scored from third on a wild pitch with one out. It was the Rockets’ second championship (2010), and only six seniors suited up for their clubs that day (four for Weston-McEwen).

The following day saw the Mac-Hi girls cap one of the most dominant runs in state playoff history as the Pioneers completed a clean sweep through the final bracket with a 4-0 win over Banks. Behind the arm of two-time 4A Pitcher of the Year Colette Robert and an offense that plated runs in bunches, the Pioneers outscored their four playoff opponents 42-0 to win their second-straight state title.

First baseman Makayla Kelly drove in two runs with Robert picking up an RBI and eight strikeouts to beat the Braves. Kelly, Robert and shortstop Stephanie Copeland were the only seniors on the Pioneer roster.

Robert, who also led the team in hitting throughout the season, went on to earn Softball Player of the Year at the Oregon Sports Awards and will be looking to earn time in the circle at Division I New Mexico when the Lobos begin their 2016 campaign in February.

It was not meant to be for the Bucks, however, and Putnam secured the 3-2 win when a one-out bunt pushed the final run across in the bottom of the seventh. Like Mac-Hi, Pendleton was trying to win its bracket for the second straight season.

With plenty of talent returning to each squad it’s not unthinkable that at least one of them will be back in the title hunt in 2016, but the perfect storm that was the 2015 playoffs may never be seen again.

2. Mustangs run the table: For those following the Heppner football program, anything short of a championship in 2015 was going to be a letdown.

After returning most of their key players from 2014’s runner-up finish, the Mustangs didn’t disappoint and left nothing up to discussion by smashing Kennedy 48-zip to claim the program’s first state title since 1992.

With a dominant front and a bruising rushing attack, Heppner outscored its four playoff opponents 181-31 to cap a 13-0 season.

Senior C.J. Kindle accounted for 60 of Heppner’s 201 rushing yards in the title game and added 71 yards receiving for five total touchdowns and the game’s MVP award. He and senior Pat Collins would later be named 2A Offensive and Defensive Player of the Year, respectively, Greg Grant won Coach of the Year and Heppner garnered 12 selections for the 2A All-State first team.

The Mustangs will lose eight seniors to graduation, but should be another formidable squad in 2016 thanks to the readiness of the team’s underclassmen, which earned ample playing time against varsity starters in the second halves of Heppner’s many blowout victories in 2015.

That left coach Dave Baty with no option but to shuffle the deck, beginning with moving All-American libero Klaree Hobart to outside hitter and 6-foot-3 freshman Kristin Williams to middle blocker for the first time in her career.

The rearranged T-Wolves found the target on their back to be quite large as they lost their first three matches of the season, and their nine total losses in 2015 gave them the second-lowest winning percentage of any of Baty’s BMCC squads.

But none of that seemed to matter once the T-Wolves hit the courts at the NWAC Championships where they went 5-0 to claim the program’s fourth-straight Northwest Athletic Conference championship.

Furthermore, the win gave the T-Wolves five titles in six seasons, also a first, and moved them into third place all-time for total titles behind Mt. Hood (9) and Spokane (8).

In her first season as a middle, Williams would be named NWAC Tournament MVP, NWAC Player of the Year and also was one of just four freshmen named to the AVCA Two-Year College All-America first team.

4. Brazile Lets ’er Buck: Nobody does it better in the sport of professional rodeo than Texas roper extraordinaire Trevor Brazile, but the King of Cowboys wasn’t considered the king of the Pendleton Round-Up until this year.

By winning $16,763 in team roping and tie-down roping at the September rodeo, the cowboy with more titles to his name than any other earned his record fifth Round-Up all-around title.

It was his fourth in a row, with the other coming in 1999 for the 19-year Round-Up veteran, and moved him past rodeo legends Shoat Webster and Yakima Canutt for the all-time Pendleton lead.

Brazile went on to claim his 13th (10th straight) all-around title at the National Finals Rodeo and holds the career high water marks in that category as well as total world titles (23) and career earnings with more than $6 million.

He plans to return looking for his fifth-straight Round-Up all-around title in 2016, which would move him past Webster (1949-52) for the longest streak in Pendleton history.

5. Irrigon completes title defense: The Irrigon boys basketball team finished off one of the greatest seasons in 2A basketball with its second-straight state championship in March at Pendleton Convention Center.

It was an incredible 27-1 run that saw the Knights defeat 5A state tournament team Pendleton during the regular season and suffer its only loss to eventual 3A champion Dayton by a single field goal.

The Knights outscored its four postseason opponents 300-174 and defeat Toledo 65-53 in the championship. It was the third straight season Irrigon had advanced to the final.

Then 23-year-old coach Mitch Thompson became the youngest championship coach in OSAA history in his first year on the Irrigon sideline, and senior forward Adrian Romero capped his career with a second-straight 2A Player of the Year nod.

The Knights were hit hard by graduation, but are off to an 8-1 start this season.

6. Bulldogs bring home another title: For the better part of a decade, the Hermiston Bulldogs have been synonymous with championship wrestling.

Nothing changed in 2015 as the Dawgs rumbled their way to a third-straight 5A team title to give them eight in the last nine years.

The one surprising turn of events for Hermiston, however, was that it outscored runner-up Hillsboro 162-154.5 in true team fashion with just one state champion but eight placers overall.

The team’s lone champ was 195-pound junior Sam Colbray, who topped his weight class for the third time and is back looking to become the third Hermiston wrestler to win four state titles this season.

The Bulldogs are off to a great start, and were runner-up at the prestigious Tri-State Tournament in December.

The Timberwolves outscored runner-up McNeese State 517.5-420 and the win came thanks to the team’s outstanding lineup of barrel racers.

While Crossley has begun her professional rodeo career, Williams and Lewis are back this season and the women’s team was in first place after the fall portion of the Northwest Region’s season.

8. Cardenas goes the distance: Umatilla senior Fabian Cardenas was untouchable in 2015 and has the hardware to prove it.

The Viking distance runner won three state titles in the calendar year starting with dual gold finishes at the 3A Track and Field Championships in Eugene this past May.

He wasn’t done there, and completed his trio at 3A/2A/1A Cross Country Championships in October in Eugene by edging out Jefferson’s Hassan Ibrahim by two seconds to win in 7:51.

9. Rockwell reaches pinnacle: Riverside wrestler Hans Rockwell pulled off a rare feat in 2015 when he captured his fourth state championship at the 3A finals in March, and he did it with style.

The 132-pound Pirate pinned all four of his state opponents to join the ranks of elite Oregon wrestlers, and capped his high school career by beating Illinois Valley’s Eric Miller in 1:45. He was named 3A Wrestler of the Year for the second time.

With one mission completed, Rockwell set out to accomplish his next wrestling goal by enrolling at Oregon State where he hopes to eventually earn a starting spot with the stalwart program.

He won his first match of the season by pin at the Mike Clock Open in November but has yet to crack the dual lineup at 141 pounds.

10. Moore does more: Never in Blue Mountain women’s basketball had a player been as popular and talented as Mar’Shay Moore.

In her sophomore season, the 5-foot-8 guard rewrote the BMCC record books with her scoring prowess and led the team to its second NWAC trophy in fifth place.

Her 123 points at March’s NWAC Championships was the most in tournament history, and she was the first BMCC player to ever be named the NWAC Player of the Year.

Without Moore the T-Wolves’ season would have likely been a regrettable one after former coach Christy Martin took a new job just before the start of the season and left elevated assistant Adam Driver to lead a squad of just seven players.

Moore signed with University of Oregon following the season and is averaging eight points a game for the undefeated Ducks (11-0) in 10 appearances as a reserve.