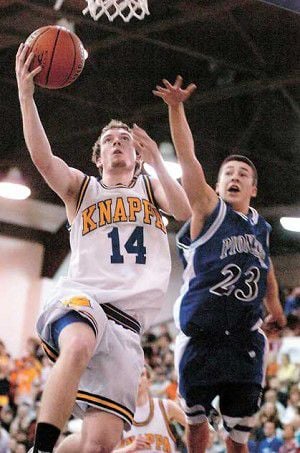 Knappa's Nate Boardman drives to the rim guarded by Western Mennonite's Jared Garza in the Loggers' 52-45 win over the Pioneers Friday in Pendleton. <BR><I>Staff photo by E.J. Harris</I> 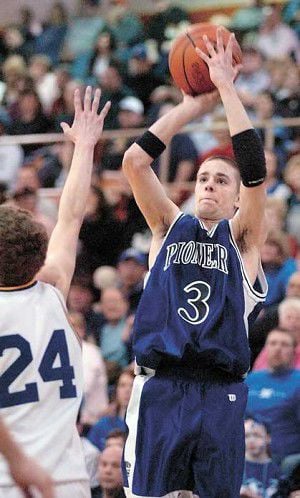 Western Mennonite's Lewis Menges shoot the ball over Knappa's Steve Tadei in the Pioneers' 52-45 loss to the Loggers Friday in Pendleton.<BR><I>Staff photo by E.J. Harris</I>

Knappa's Nate Boardman drives to the rim guarded by Western Mennonite's Jared Garza in the Loggers' 52-45 win over the Pioneers Friday in Pendleton. <BR><I>Staff photo by E.J. Harris</I>

Western Mennonite's Lewis Menges shoot the ball over Knappa's Steve Tadei in the Pioneers' 52-45 loss to the Loggers Friday in Pendleton.<BR><I>Staff photo by E.J. Harris</I>

PENDLETON - Of any team Western Mennonite would face in the OSAA 2A State Championships, only Knappa had the blueprint for how to beat the Pioneers this season.

Knappa senior Jesse Moreland said that earlier victory gave the Loggers all the confidence they needed for the rematch and the 6-foot, 7-inch center led the way with 22 points and lifted the Loggers to a 52-45 win to advance to the championship game against De La Salle today at 8:15 p.m.

"We match up with them pretty well," Knappa coach Craig Cokley said. "The biggest difference is our main post player, Jesse Moreland is a 6-7 guy and their main post, Geoffrey Martin is a six foot guy. We have a tough time scoring on them, but we were able to get a lot of offensive rebounds and get points around the rim which our size allows us to do."

Moreland was held in check in the first half, scoring just six points and with that, the Pioneers built a sizable lead. And during the last six minutes of the second quarter, he was on the bench with foul trouble.

But he was not to be denied in the second half. Trailing by two in the fourth quarter, Knappa was led back by Moreland, who contributed to nine of the last 12 points, scoring seven and assisting on a handsome dish to Nate Boardman for a lay-in.

"I don't know, I was pumped," said Moreland, who knocked down six of eight shots from the free throw line. "I guess I wanted it a little bit. But we're a team and we play like that."

"Those are just plays that guys make that have a heart of a champion," Cokley said. "You don't get in many more pressure packed situations than the one we had tonight. 1,100 people screaming at the top of their lungs and you have to make a play and to be able to do that shows an awful lot of fortitude and not just Jesse. He made a lot of big plays down the stretch, but all of our guys."

Boardman contributed 10 points and 10 rebounds for the Loggers and Tevan Klauser chipped in 11 as well. And freshman Mitch Cokley had one of the biggest shots of the night, drilling his only three at the top of the key to tie the game. He finished with seven points despite not taking a shot in the first half.

"That's what he does, he shoots the three ball and it goes in," Moreland said. "It's nice having a freshman step in. We lost two players last year and we didn't know if we'd be very good, but it's better than it's ever been since I've been here."

Cokley said the team just had to weather the storm as Tayler Branch, Pierre Zook and Martin poured in a combined 20 points and missed only a handful of shots.

Moreland said he kept thinking to himself the hotstreak could not last forever and in the second quarter, Western Mennonite went nearly as cold as it had previously been hot, scoring just four points and allowing the Loggers to close the lead to just one by halftime.

But try as they might, the Loggers could not take the lead, not until Mitch Cokley buried his three-pointer a play, the coach thought turned the tide in the ballgame to Knappa.

"We got in the huddle and said we had to win this," Moreland said. "This was all or nothing and we came back and won."