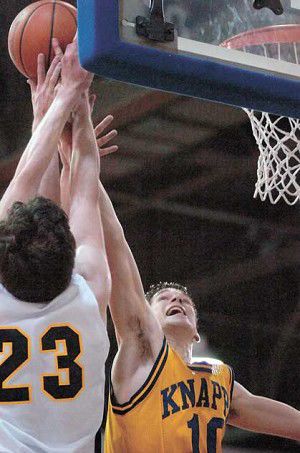 Knappa's Jesse Moreland fights for a rebound with Lakeview's Jonathan Squires on Wednesday in the Loggers' 59-41 win over the Honkers in Pendleton.<BR><I>Staff photo by E.J. Harris</i> 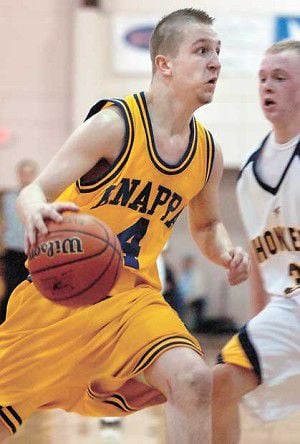 Knappa's Tevan Klauser drives on Lakeview's Andy Pardue on Wednesday in the Loggers' 59-41 win over the Honkers in Pendleton.<BR><I>Staff photo by E.J. Harris

Knappa's Jesse Moreland fights for a rebound with Lakeview's Jonathan Squires on Wednesday in the Loggers' 59-41 win over the Honkers in Pendleton.<BR><I>Staff photo by E.J. Harris</i>

Knappa's Tevan Klauser drives on Lakeview's Andy Pardue on Wednesday in the Loggers' 59-41 win over the Honkers in Pendleton.<BR><I>Staff photo by E.J. Harris

PENDLETON - The first round boys' OSAA Class 2A Basketball State Championships game between Knappa and Lakeview was truly a tale of two halves.

The Honkers took a 30-23 lead into the break and by all accounts dominated play in the first half, shooting at a 48.1 percent clip and hitting three shots from behind the arc. Meanwhile, the Loggers were hitting on just a third of their shots and were 7 of 14 from the charity stripe.

However, Knappa was able to sway the momentum in their favor with a 20-3 third quarter and put Lakeview away, shooting 60 percent and scoring 16 points off turnovers in the second half of their 59-41 win.

"Lakeview has a very athletic team and kind of created a scramble type of atmosphere out there," Knappa coach Craig Cokley said. "They really took the game to us and they controlled the first half. We were a little tentative and it showed at the free throw line."

Cokley said a turning point was when they implemented their half-court trap in an attempt to keep the pace of the game fast and give them as many possessions as possible.

"It caused them a little bit of problems so we went primarily with it in the second half and it got them off their rhythm offensively," he said.

"We came out and couldn't have played a better half of basketball for the first two quarters," he said. "Why it changed in the second half, I would like to know myself, personally. The only thing I can say is the kids just shut down. They didn't want to dig deep enough, they didn't want to win it deep enough and they didn't want to continue that hard defensive pressure and the things that had to be done for four quarters to beat that team."

Knappa's Mitch Cokley and Jesse Moreland led the game with 16 points apiece, but it was Tevan Klauser and Steve Tadei who provided the biggest sparks in the second half.

Tadei scored all 10 of his points after intermission while Klauser had nine points, four rebounds and three steals in the second half. He finished with 11 points, seven rebounds and was 6 for 8 on free throws.

"We weren't really down," Tadei said of the team's attitude in the first half. "We were just kind of still plugging away. We were trying to find our groove and eventually found it there and were able to climb back in.

"We could tell that (Lakeview's players) were getting a little fatigued and we've been working all year on just maintaining good shape and it was starting to pay off there in the second half."

Cokley hit all three of his attempts from behind the arc and led the team with four assists - three in the second half - while going 7-12 at the charity stripe.

Lakeview (18-8) was paced by Shylo St. Clair's 11 points, but he and Matt Clemens (seven points) each were held scoreless in the second half as the team shot a paltry 17.4 percent from the field.

The Loggers, which played their starting five for all but two minutes, move on to face a Western Mennonite team with revenge on their minds in Friday's second round. The Loggers were the only team to beat the Pioneers this season.