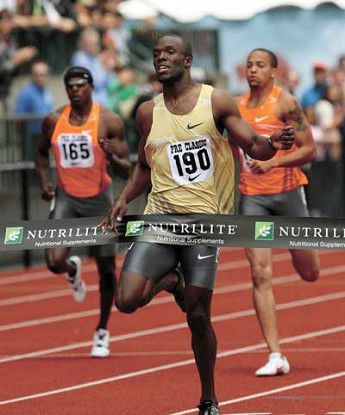 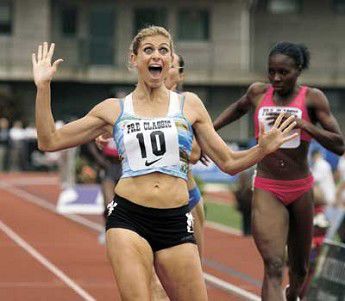 Maggie Vessey left, reacts after winning the women's 800 meter ahead of Kenia Sinclair, from Jamaica, during the Prefontaine Classic track and field meet in Eugene, Ore., Sunday, June 7, 2009. Vessey won the race with a time of 2:00.18. <br><I>AP Photo

Maggie Vessey left, reacts after winning the women's 800 meter ahead of Kenia Sinclair, from Jamaica, during the Prefontaine Classic track and field meet in Eugene, Ore., Sunday, June 7, 2009. Vessey won the race with a time of 2:00.18. <br><I>AP Photo

"I'm more of a sprinter-type quarter-miler," Merritt said. "I have a quarter-miler background, so the (300) is right down my alley."

Fellow Americans Xavier Carter was second in 31.93, and Wallace Spearmon was third in 32.14.

The Pre, as it is known, is the last major meet in the United States before the national championships later this month.

American Kara Goucher, who was third in both the Boston and New York City Marathons, was seventh in the event.

American Michael Rodgers ran the 100 meters in a personal-best 9.94 seconds, in a field that included former world record holder Asafa Powell of Jamaica. Carmelita Jeter won the women's 100 in a wind-aided 10.85 seconds.

Other winners included Bernard Lagat, who won the 3,000 meters in 7:35.92 under mostly cloudy skies and temperatures in the mid-60s.

Lagat was disappointed with his performance at the Reebok Grand Prix in New York, and wanted to get in some extra work before heading to Arizona to train for the nationals at altitude.

"I knew it was an early race, so I didn't want to set too high of expectations," said Richards, the bronze medalist in Beijing. "But I definitely always like to run under 50 seconds so when I looked up and saw 49, I was very pleased."

Barringer, who ran in the 3,000 steeplechase in Beijing, is a senior at Colorado. She's headed to the NCAA championships this coming week in Fayetteville, Ark.

Dwight Phillips postured before the grandstand with his hands on his hips to cheers from the crowd after a 28-foot, 8.25-inch leap in the long jump, both a Prefontaine and Hayward Field record. Phillips was the 2005 world long jump champion.

Kenyan Asbel Kiprop won the Pre's signature event, the Bowerman Mile, in 3:48.50. Thirteen of 16 runners in the event ran it under four minutes.

The Pre, in its 35th year, is named after Oregon distance runner Steve Prefontaine, an Olympian killed in a 1977 car accident at 24.

The meet, the fifth and final event of the USATF's outdoor Visa Championship Series, is held annually at Hayward Field, the site of last year's Olympic trials and this year's national championships, which will determine the U.S. team for the worlds.