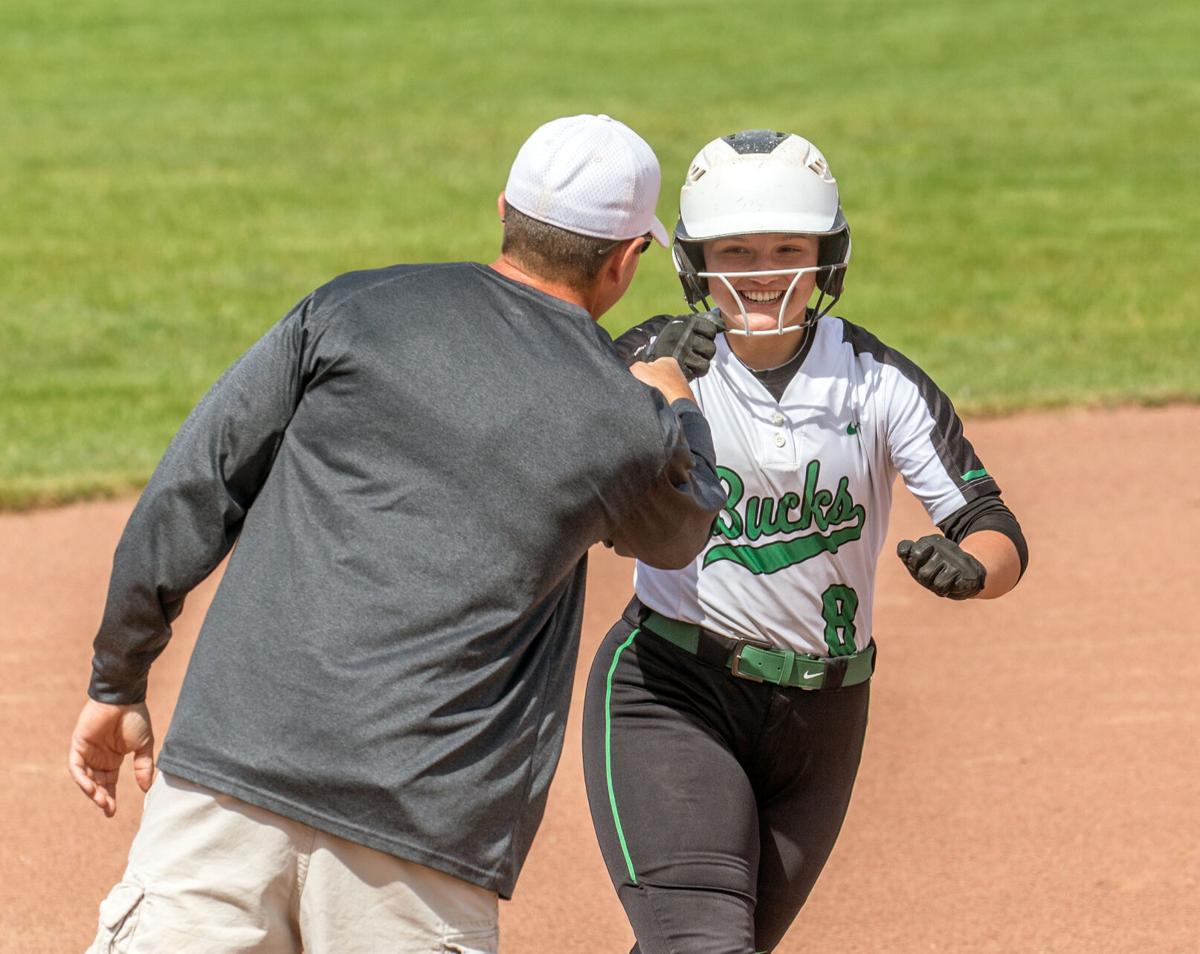 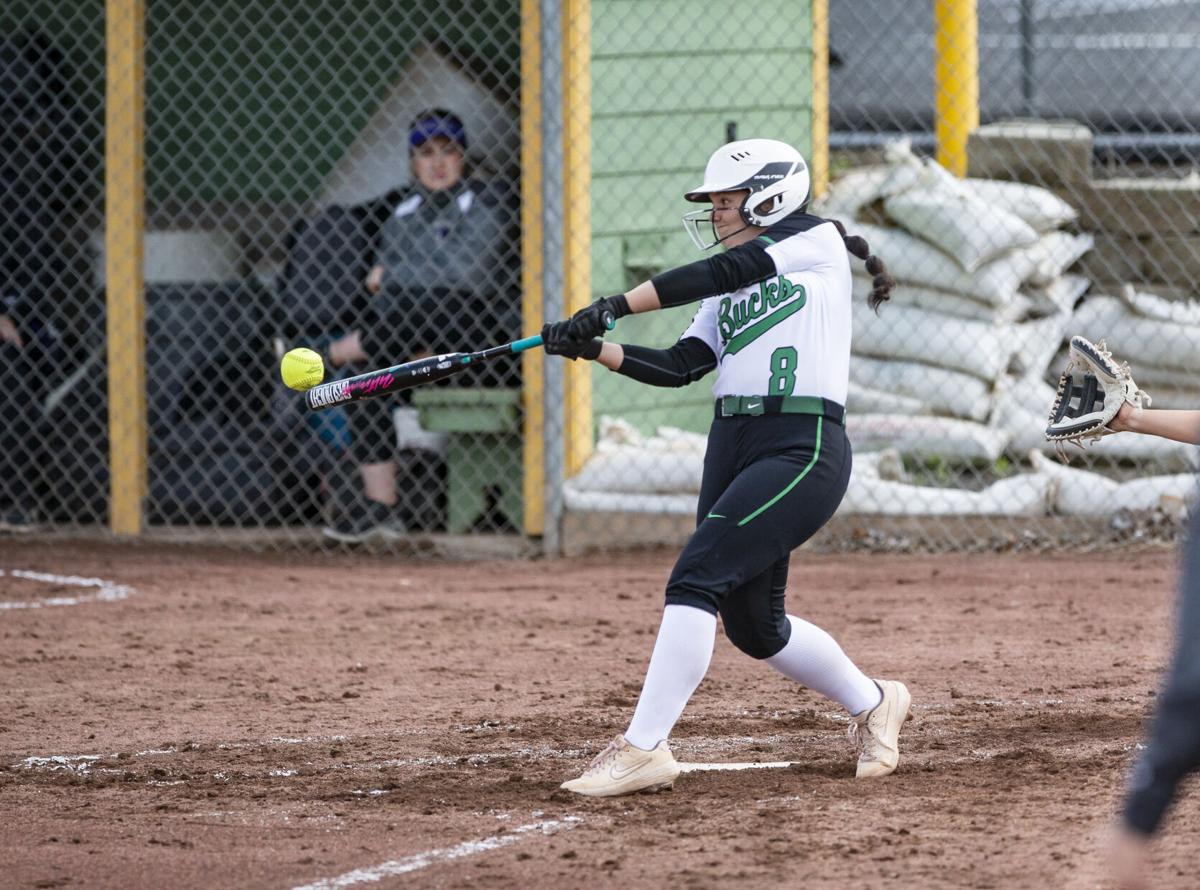 Pendleton’s DeLaney Duchek (8) drives a double down the third base line May 22, 2021, during an Intermountain Conference title game against the Ridgeview Ravens in Pendleton. Duchek signed to play softball this spring with Mount Hood Community College.

Pendleton’s DeLaney Duchek (8) drives a double down the third base line May 22, 2021, during an Intermountain Conference title game against the Ridgeview Ravens in Pendleton. Duchek signed to play softball this spring with Mount Hood Community College.

PENDLETON — DeLaney Duchek knew she wanted to stay in Oregon to go to college and play softball. But she also wanted a bit of independence.

“I wanted to stay in Oregon, that was a big thing for me,” Duchek said. “I wanted to get out of Pendleton, but not La Grande. I wanted to go toward the city. I spoke with the coach (Brittany Hendrickson) for several months, and she came and watched a few of my games. We already have group chats going for softball.”

Hendrickson does not hand out offers on a whim, she does her homework on prospective players.

“I talked to about 10 people about her before we had our first conversation,” Hendrickson said. “We exchanged a few emails, we invited her to a club scrimmage, and I got to see her club team play in Medford. We never got to do a campus visit because of COVID.”

Duchek also has a connection with the Mount Hood team, having played summer ball last year with other members of the Saints.

“I played with three of them on the Blaze team based out of Portland last year,” she said. “Because of COVID, we had to travel pretty far when we did play. We went to Idaho, Utah, Texas and Arizona.”

Duchek was the Bucks’ starting shortstop this season. She hit .358 with seven doubles and two home runs. She also had 17 RBIs, and struck out just six times in 53 at-bats.

“Compared to my sophomore year, that was so much better,” she said. “I struggled with hitting my sophomore year. I got my confidence back and did my thing. I also batted fourth, which was fun.”

The Bucks finished 15-2 this season, losing the Intermountain Conference district title game to 8-4 to Ridgeview.

“That one kind of sucked,” Duchek said. “It was the one game that really mattered. We got outplayed that day. I don’t think they were a better team. I think it was a learning experience for the girls coming back next year.”

As a sophomore, Duchek played left field for the Bucks, which gives her versatility when it comes to college.

“I rotated my sophomore year with another player in left field,” Duchek said. “It was my first year playing outfield. I’m glad now, I can be a utility player in college.”

Hendrickson is happy to add a multi-position player to her roster.

“She is definitely a kid coming who is a true utility player,” she said. “I have seen her play third, short and in the outfield. I’m excited about her being able to play multiple positions for us.”

Duchek is one of a few Pendleton players to don a Mount Hood uniform. Shea and Darian Lindsey played for the Saints, as did Kasidee Lemberger and Reeghan Lehnert, to name a few.

“Historically, that area has been a really good area for Mount Hood,” Hendrickson said. “Great talent softball wise. I’m excited to have her in the program. She’s a great kid.”

Duchek plans to study psychology and take pre-law classes. Her end goal is to be a lawyer.

She will have a great start to her college career with a handful of scholarships.

Duchek recently received a $1,000 scholarship from the Pendleton Round-Up and Happy Canyon boards of directors. The scholarships are awarded to students who volunteer their time to make the annual rodeo and night show a success, and maintain a high standard of academics.

She also received one of three Steve Cary Memorial Scholarships in the amount of $500, the Ashley Hodgen Scholarship and a $2,000 grant from Oregon Promise, which is for students who attend an Oregon community college.

All of that is on top of the $2,000 scholarship she received from Mount Hood for playing softball.

“Those will really help,” Duchek said.

Photos: The view from day one of Big Ten Media Days at Lucas Oil Stadium

Two-Minute Drill: Breaking down everything we heard and learned at Big Ten Media Days