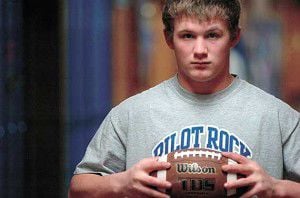 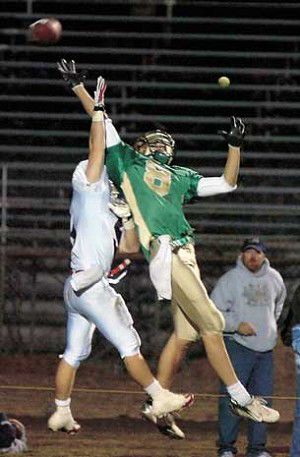 Pendleton's Matt Baty leaps for a pass in the Buckaroos' loss to Churchill in a first-round playoff game in Pendleton during his junior season.<BR><I>EO FILE PHOTO</i>

Pendleton's Matt Baty leaps for a pass in the Buckaroos' loss to Churchill in a first-round playoff game in Pendleton during his junior season.<BR><I>EO FILE PHOTO</i>

LA GRANDE - Coming off a 5-6 season and a third-place finish in the Frontier Conference, Eastern Oregon University head coach Tim Camp was looking to make a splash with his second recruiting class.

With first-team all-conference quarterback Chris Ware headed into his sophomore season, Camp needed players that were ready to play immediately as well as those that would be the backbone of the squad in a couple of years.

Camp found some of the latter in his own backyard and there could be more to follow.

Pilot Rock's Chance Bandy, Pendleton's Matt Baty, Union's Sam Fiorito and Ontario's Jordan Martinez all signed letters of intent to play for the Mounties next season and Weston-McEwen's Johnny Huntsman has a workout with the team coming up this week.

The class was 29 strong as of Saturday, with four transfers from Western Washington, two from Portland State and one from Boise State. Six of the incoming freshmen are from Oregon.

"I'm very satisfied with the signing class," Camp said in a press release. "You never really know until the guys show up and play, but on paper, this is a great recruiting class. We are very excited about this group. They are good students, they are good athletes and most of all they're great people.

"Our goal every year is to win a Frontier Conference championship and get to the point of competing for a national championship. Time will tell how good of a signing class this will be, but we think this group can help us accomplish our goals."

Bandy is the most visible athlete to sign from Eastern Oregon, but the EO Player of the Year for small schools knows the difference between Smith Field and Community Stadium is much more than a few extra fans.

"I think it's just like starting over in high school, but it's going to be harder," said Bandy, who started out in high school wanting to play baseball at Eastern before they cut their program. "When you're a freshman everybody seems huge and you don't really get to play much."

"It's at least a two-year process for him probably to step on the field," Pilot Rock football coach and athletic director Troy Jerome said. "And when you're going from doing everything, everybody counting on you on Friday night, game plan, plays around him - it's tough to make that commitment and it will be interesting to see if he can do it. I think he can. I know he has the ability to go play there."

Bandy played quarterback and linebacker for the Rockets but is listed on the Eastern Oregon recruiting list as a wide receiver/defensive back, but his position is far from set.

"They didn't talk about even really position, what they were going to do," said Jerome, who played baseball at EOU. "They just want to bring him on and see where he goes from there. It's tough to say because it's a ways away."

"All I know right now is he's a football player," Camp told the East Oregonian. "I think Chance does have a great skill set. Basically, with the way I do things, I recruit a lot of quarterbacks and we talk a lot about position flexibility."

Bandy, like Baty and the rest of the freshman class, will red shirt his first year to give him time to make the adjustment and make sure he can keep up with the academic requirements.

Both Baty and Bandy felt red shirting was the right thing to do.

"When I heard him tell me he red shirts all his freshmen I was kind of excited about all that," Baty said, adding he really wants to get a chance to adjust to the college routine and add another year of bulk in the weight room.

Baty was a player that wasn't on too many college radars at the beginning of the season and he said with the turmoil that surrounded the Bucks' coaching staff in 2008, getting his name out there was even tougher.

But the 6-foot-4 wide receiver displayed the measurables to wet Eastern's appetite and once they saw some film they decided he was a player they wanted.

"We really tried to hit home with some guys that play some good football," Camp said.

"I basically told myself that if I was going to go to college I was going to try to play football," Baty said. "A couple things happened during the final season that made it hard but EOU was top three choices all the way."

Baty said the location was a big factor in his decision but it was the time spent with Camp that made up his mind.

"When I talked to him he made me feel like he was taking his program to the next level and he was dedicated to his program," Baty said.

"He has high expectations for everybody so he wants you to do good in the classroom and on the field," Bandy said of Camp. "I think I could learn a lot from him."

The Mounties begin their season Aug. 29 against Southern Oregon and play their first home game Sept. 5 against Rocky Mountain College. They have three summer camps scheduled in June and July and also have tentative plans to travel to Athena for a camp in the summer, though a date has not been set. The Mounties also will have an inter-squad scrimmage in Pendleton's Round-Up Stadium in early August.