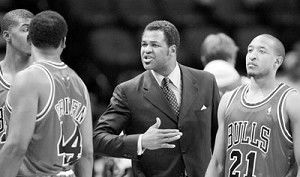 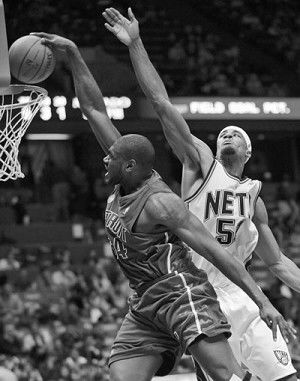 The Pistons' Jason Maxiell, left, dunks the ball as he gets by the Nets' Sean Williams Wednesday. <i>The Associated Press</i>

The Pistons' Jason Maxiell, left, dunks the ball as he gets by the Nets' Sean Williams Wednesday. <i>The Associated Press</i>

A coaching change didn't help the Bulls on Wednesday night, as they fell even further behind the Central Division leading Pistons.

With Pete Myers running the Bulls in San Antonio, Tony Parker scored 28 points, and the Spurs led by as many as 25 points in their 94-79 victory.

Chicago fired Scott Skiles on Monday and showed there's plenty more work to do, falling to 9-17 and 11 games back of Detroit.

PISTONS 101, NETS 83 - At New Jersey, Richard Hamilton scored 22 points and the Pistons shot 78 percent in the third quarter. Chauncey Billups scored eight of his 17 points and handed out four of his 10 assists in the quarter, when Detroit made 14 of 18 shots to turn a one-point halftime lead into a 14-point laugher.

The Pistons were 24-for-37 from the field in the second half. They have held their past seven opponents to fewer than 90 points.

Hornets 116, Grizzlies 98 - At Memphis, Tenn., Chris Paul had 40 points and nine assists, and New Orleans used a third-quarter spurt to win its third straight. It marked the second-highest point total in Paul's career. Only his 43 points against the Grizzlies on Dec. 7 was better.

Pau Gasol, the Grizzlies' second-leading scorer, finished with eight points, ending a streak of 81 games in double figures. That was the third-highest in the league behind Carmelo Anthony and Ray Allen.

Anthony, who had four double-doubles last season and six so far this season, finished with 29 points and 10 rebounds in three quarters. Camby had 10 points, 11 rebounds and 10 blocks for his third career triple-double.

Celtics 89, Kings 69 - Paul Pierce scored 14 of his 16 points during a dominating second-quarter run that carried Boston to its first win in Sacramento in more than 11 years.

Ray Allen led the way with 17 points and Kevin Garnett added 14 points and 10 rebounds for the Celtics, who had lost 11 straight at Arco Arena since Feb. 16, 1996. It was Boston's first road game against a Western Conference team.

Hawks 107, Pacers 95 - At Atlanta, Joe Johnson had 26 points and 11 assists as the Hawks beat Indiana for their first five-game winning streak in eight years.

The Hawks are three games over .500 this late in the season for the first time since the 1998-99 season, the last time they made the playoffs. The Hawks' last five-game winning streak came early the following season, from Nov. 27-Dec. 8 in 1999.

Jazz 99, Mavericks 90 - Carlos Boozer scored 21 points, including six of Utah's last seven, to lead the Jazz to their third win in the past 12 games.

Andrei Kirilenko and Deron Williams had 17 points apiece as the Jazz improved to 10-2 at home.

Jamal Crawford led New York with 29 points and eight assists, but had little offensive help in the second half. The Knicks lost their third straight.

The Sixers improved to 12-16 and defeated the Heat for the 13th time in the past 15 games in Philadelphia.