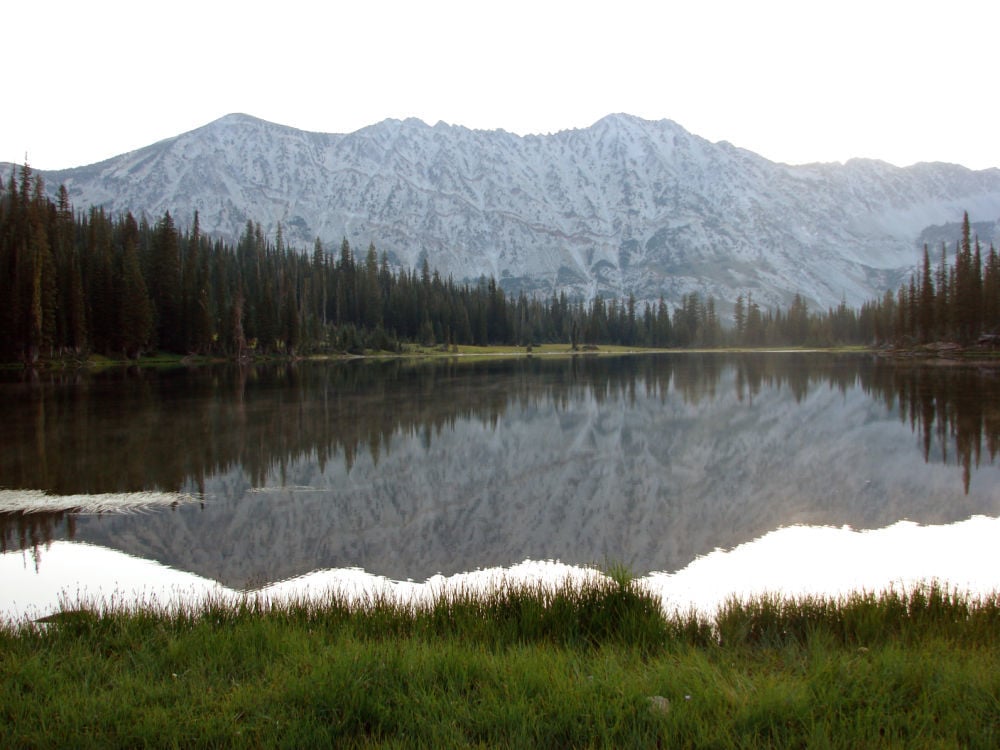 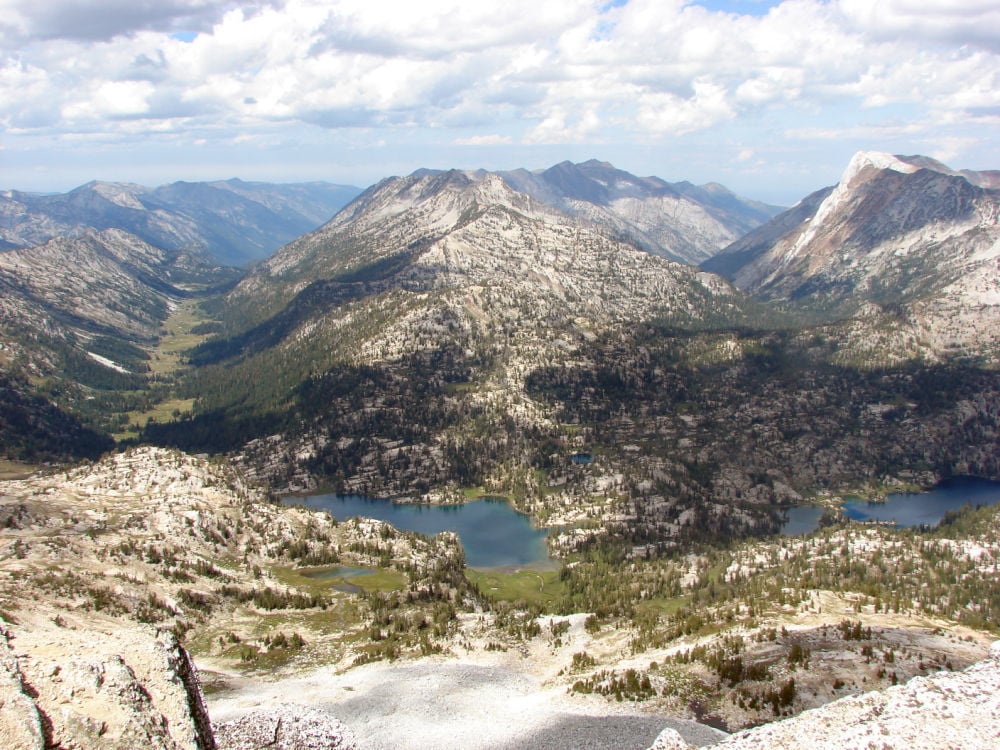 Just one of the many breathtaking views from the top of Eagle Cap includes the Lostine Valley to the left, Mirror and Moccasin lakes directly below and the white Matterhorn and brown Sacajawea Peak on the right.

Just one of the many breathtaking views from the top of Eagle Cap includes the Lostine Valley to the left, Mirror and Moccasin lakes directly below and the white Matterhorn and brown Sacajawea Peak on the right.

LOSTINE — Somewhere along the grueling climb up the northwest ridge of Eagle Cap, it dawned on me: Once atop the renowned peak in the heart of the Wallowa Mountains, I would need to slog the 12 miles all the way back down to Two Pan Trailhead.

When I was planning the three-night hiking and camping trip with a friend to the Eagle Cap Wilderness in Northeast Oregon, I came across this on summitpost.org about climbing Eagle Cap: “Visitors should allow two days for this route, although many hikers are able to complete the entire summit hike in one long day.”

As I approached the 9,572-foot summit of Eagle Cap — often called the “hub” of the Wallowas because most of the granite ridges and deep, glaciated valleys of the range branch off from it — I began to regret accepting the challenge.

After arriving in Lostine, we took the rough Forest Road 8210 up the Lostine River Canyon and found a prime campsite along the river at Arrow Campground, one of several U.S. Forest Service campgrounds located along 8210.

We awoke early the next morning and made the short drive to Two Pan Trailhead. Most folks who plan to summit Eagle Cap do it as part of a long backpacking trip during which they camp at various lakes along the way. (The 36-mile Wallowa River Loop Trail is a popular multi-day backpacking route.)

But we were on a tight time schedule and lacked backpacking gear, so we decided to attempt the summit in a single hardcore day.

From Two Pan, the East Lostine River Trail rose steeply for a few miles until it leveled off when we reached the green East Lostine River Valley. There, the small stream meandered through a long meadow and Eagle Cap rose in the distance far to the south — impossibly far.

But we trudged on through the valley, hoping to soon come upon Mirror Lake, a base for backpackers who climb Eagle Cap.

We trekked on and on, but the lake never appeared. Finally, just when I was wondering if we had made a wrong turn somewhere, we arrived at the lake after more than 8 miles of hiking. Jagged ridges rose above the lake on all sides, Eagle Cap soaring above the water to the south.

After eating a quick lunch from our packs on the shore of Mirror Lake, we turned west onto the Ivan Carper Trail, and then after about 100 yards, we turned south onto the East Eagle Trail, which leads a steep 2.7 miles to the summit.

The trail inclined above a small glacial lake, and we could look back down at the green ribbon of the East Lostine River Valley cutting between the granite ridges.

As we reached large snow patches on the shale ridge, the trail disappeared, but then I found it again near the top of the northwest ridge. There, the panoramic view opened up to a whole other section of the Wallowas to the southwest. For miles and miles, pointy peaks rose high above lush green valleys, reminiscent of the European Alps. Indeed, the Wallowas are often called the “Alps of Oregon.”

The trail curled around the far side of the ridge, then made its way steadily up the sloping northwest side of Eagle Cap.

I was bushed by the time I reached the summit, but the view from up there might be the most unforgettable of my lifetime. I was quite literally surrounded by mountains in a cornucopia of glaciers, blue lakes and granite monoliths.

The painful ramble all the way back down to Two Pan was tolerable at the start but pure misery by the finish. I raised my hands when we reached the trailhead at 7:30 p.m. as if finishing a marathon — and we were not far off. All told, we hiked about 24 miles in 11 hours with an elevation gain of about 4,400 feet. My Garmin watch noted my 55,146 steps, a personal one-day record by about 25,000 steps.

The next day, we planned a much easier and shorter hike of about 7 miles round trip along Hurricane Creek, just a few miles west of Lostine. The Hurricane Creek Trail is perhaps the best way to take in some dramatic scenery of the Wallowas via a relatively easy day hike.

Just half an hour into the hike from the trailhead, we could see towering 9,838-foot Sacajawea (the highest peak in the Wallowas), and several other peaks farther in the distance, including the 9,826-foot Matterhorn, Oregon’s majestic version of the iconic Swiss peak of the same name.

Eventually, Hurricane Creek merges with Slick Rock Creek, where a waterfall spills over the steep, gray granite and then tumbles through a tight canyon over several tiers.

We needed about three hours to complete the trek, then we drove east a few miles into the town of Joseph and spent some time relaxing on the shores of Wallowa Lake.

Many of the trails in the Eagle Cap Wilderness are blocked by snowbanks through June and early July, according to the Forest Service. High-elevation trails are usually snow-free from mid-July through September. Visitors should check with the Wallowa Mountains Visitor Center to see which routes are accessible.

The Eagle Cap Wilderness is the most heavily used wilderness in northeast Oregon, and the Lakes Basin Management Area is the most popular area, according to the Forest Service. But after Labor Day, crowds thin out and solitude abounds.

Late summer and early fall can be a spectacular time in the Wallowas. But think twice before attempting a summit of Eagle Cap in a single day.