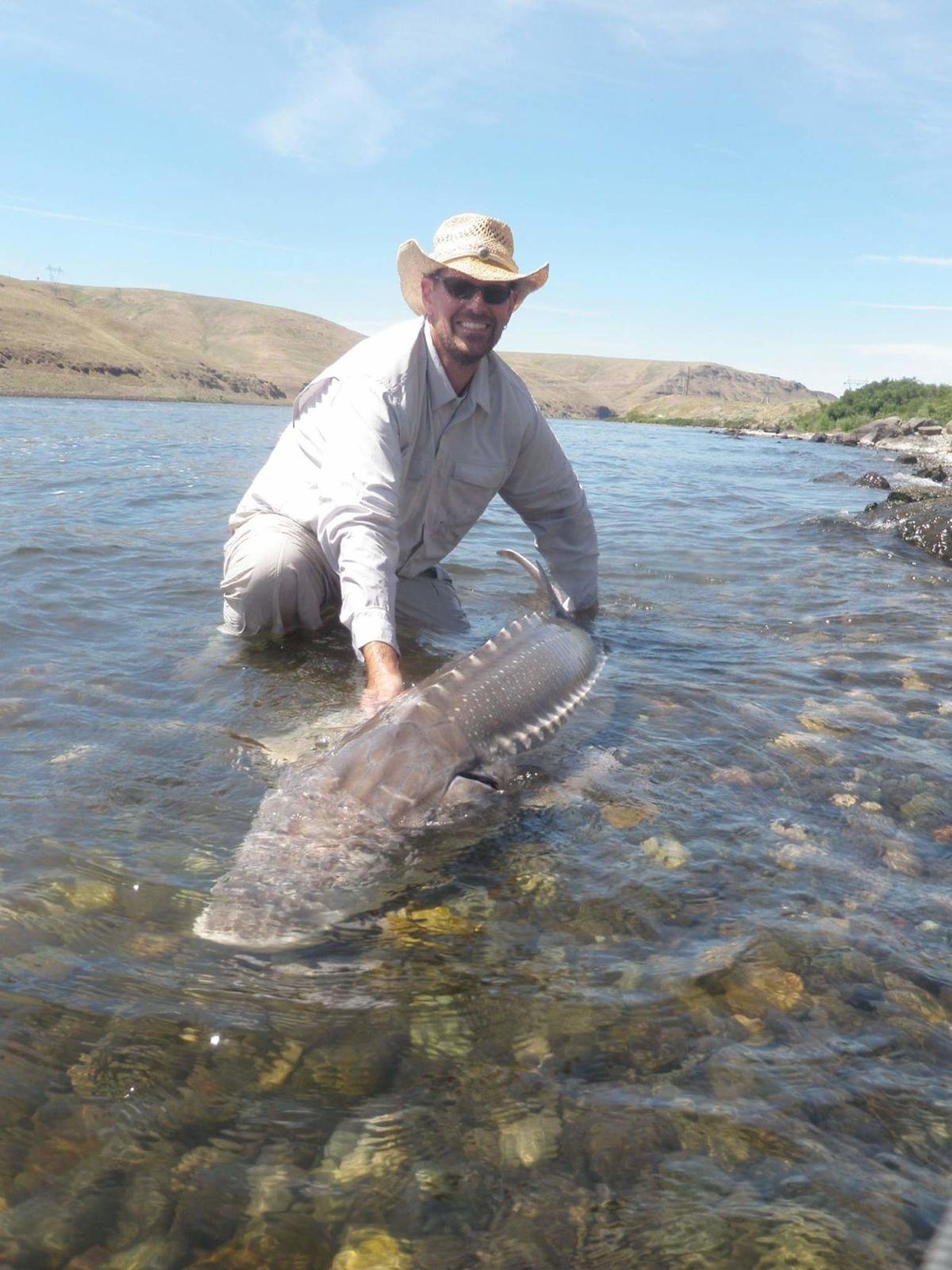 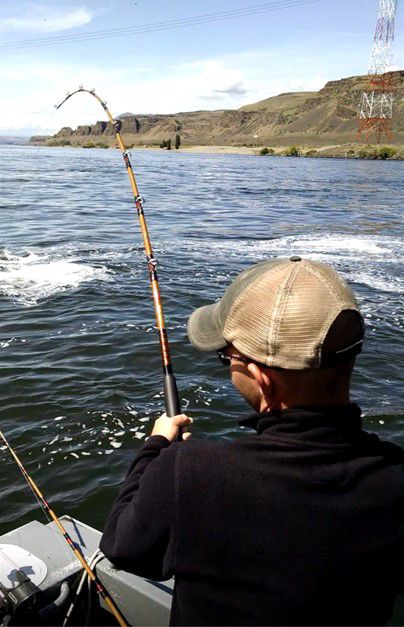 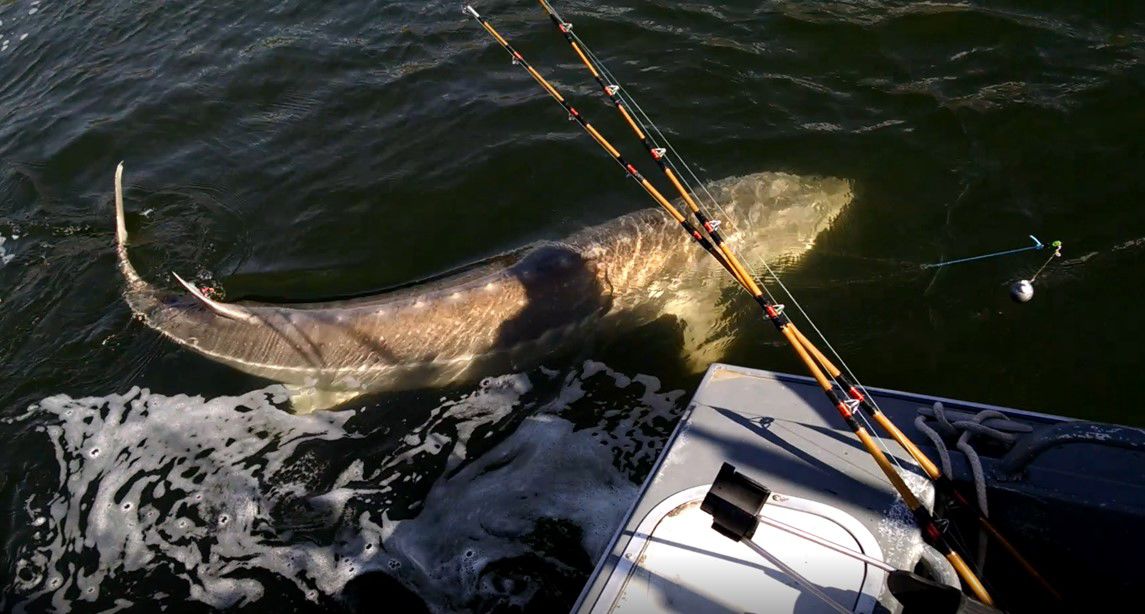 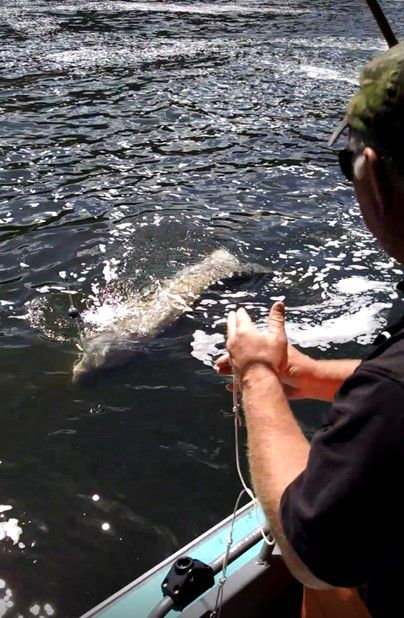 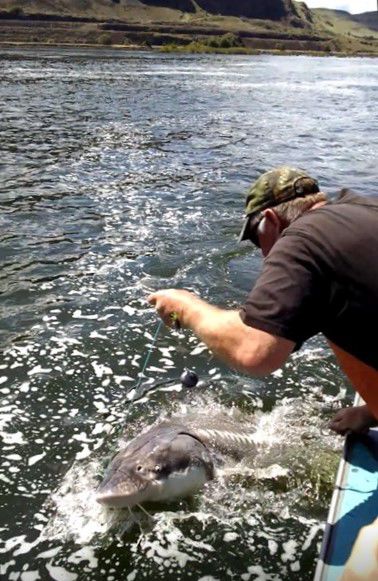 Moments after the photo, this big sturgeon decided it wasn’t time to be caught and nearly vanished with a broken rod in tow.

Moments after the photo, this big sturgeon decided it wasn’t time to be caught and nearly vanished with a broken rod in tow.

TRI-CITIES, Wash. — Once a teenager with wild dreams of becoming a fish biologist, I set my graduate school sights on studying the prehistoric and long-lived sturgeon that swim among the barges, gators, and salmon in our nation’s largest river systems. And, as all best laid plans, sturgeon were far from the focus of my master’s thesis.

But upon winding my way to the Pacific Northwest, my study in sturgeon evolved to angling. I did learn a few things about these fascinating beasts in the process.

Native to the Columbia River Basin, white sturgeon (Acipenser transmontanus) in their present form have occupied the planet for approximately 175 million years and can be seen etched into Native American petroglyphs. Sturgeon are incredibly unique benthic dinosaurs characterized by armored scales called scutes, barbels (“whiskers,” like a catfish) that smell food and an inferior (on the bottom) protruding mouth that sucks in food like a vacuum cleaner. One of the largest white sturgeon on record was measured over 12 feet long.

Mother Nature has a way of throwing curveballs at species, setting them back and wiping them out, but the adaptive, and sometimes most primitive persist, at least until humans discover them. In the early 1900s, white sturgeon were overfished for their roe to be sold as highly prized caviar. While fishing regulations are now highly restrictive, dams present obstacles to adult sturgeon migration and genetic diversity. Like salmon, white sturgeon migrate to the ocean as juveniles where they mature and return to spawn as adults. Populations downstream of Bonneville Dam are the strongest in the Columbia Basin, yet upstream populations without ocean access are struggling.

White sturgeon can live to be about 100 years old. Their maturation is slow and only about 1% of the population is among the spawning cohort over 25 years old. It’s difficult to draw many accurate conclusions on their long-term population trajectory. Conservation programs are underway to propagate sturgeon and promote genetic diversity to the degree possible.

Angling is an effective means for capturing adult sturgeon and I was invited afield to collect brood stock for the Yakima Nation hatchery program for my first sturgeon fishing adventure. It was about this time in June when I finally laid hands on an adult sturgeon after years of dreaming. For the first time in my life, I experienced what it truly meant for my arms to be tired from fighting fish.

We’ve all heard wisdom of using big bait to catch big fish, but I was educated by our technique. Rigging up whole American shad on a rope leader and hook large enough to slip around a soda can required 3 pounds of lead to sink it into the current below the dam spillway. Miraculously, we managed four rigs without a single snafu.

With lines down, the crew bantered on fishing in general, recalling the past steelhead season. My friend and colleague, Chas, was midway through his harrowing tale of landing a winter steelhead on the Hoh River when the back-right rod bounced hard against the gunnel.

Leaping into action, Chas grabbed the rod, flipped the bail open and waited for the fish to commit to the bait. The rod continued to bounce as line fed out beneath the light pressure of Chas’s thumb. Slamming the bail shut and laying 6 feet of stout ocean rod into the fish was of little consequence to the speed and course of the massive sturgeon.

The high-test, braided line screamed through the water as if attached to a steel-gray bullet train as the sturgeon angled across the tailrace. At once, the sturgeon spun a U-turn, rocketing directly back to the boat, breaching at the stern and nearly flopping aboard. I will never forget that moment as a snow-capped Mount Hood stood picturesque in the background. We quickly guessed it to be a 9-footer and popped the anchor to follow the fish.

Forty-five minutes passed, as did the rod among those with fresh arms, before we were able to secure the beast. I served as second rod hand. Trying to winch a speeding school bus from the river bed is the only description that paints a remotely appropriate picture of the fight, our 24-foot jet boat in tow like a barge behind a tug.

With the fish tied off, we floated down river to pass it off to the Yakima Nation for data collection, then motored back upstream for round two. By the end of the day, we landed five additional mature fish between 6 and 9 feet with one successful double. It was truly epic. The three-hour drive home was excruciating.

Sturgeon fishing is highly restricted in Oregon and Washington to protect these treasured fish. Some Columbia River tributaries are closed entirely to sturgeon fishing, while most other waters are catch-and-release only. A 2020 harvest fishery in the lower Columbia River imposes a slot limit of 44 to 50 inches (fork length) and is projected to allow 5,720 harvestable fish. If you plan to angle for sturgeon, be sure to check the regulations, and always handle these primordial giants with respect and care. How we treat them today may affect the spawning population and our privilege to fish for them tomorrow.