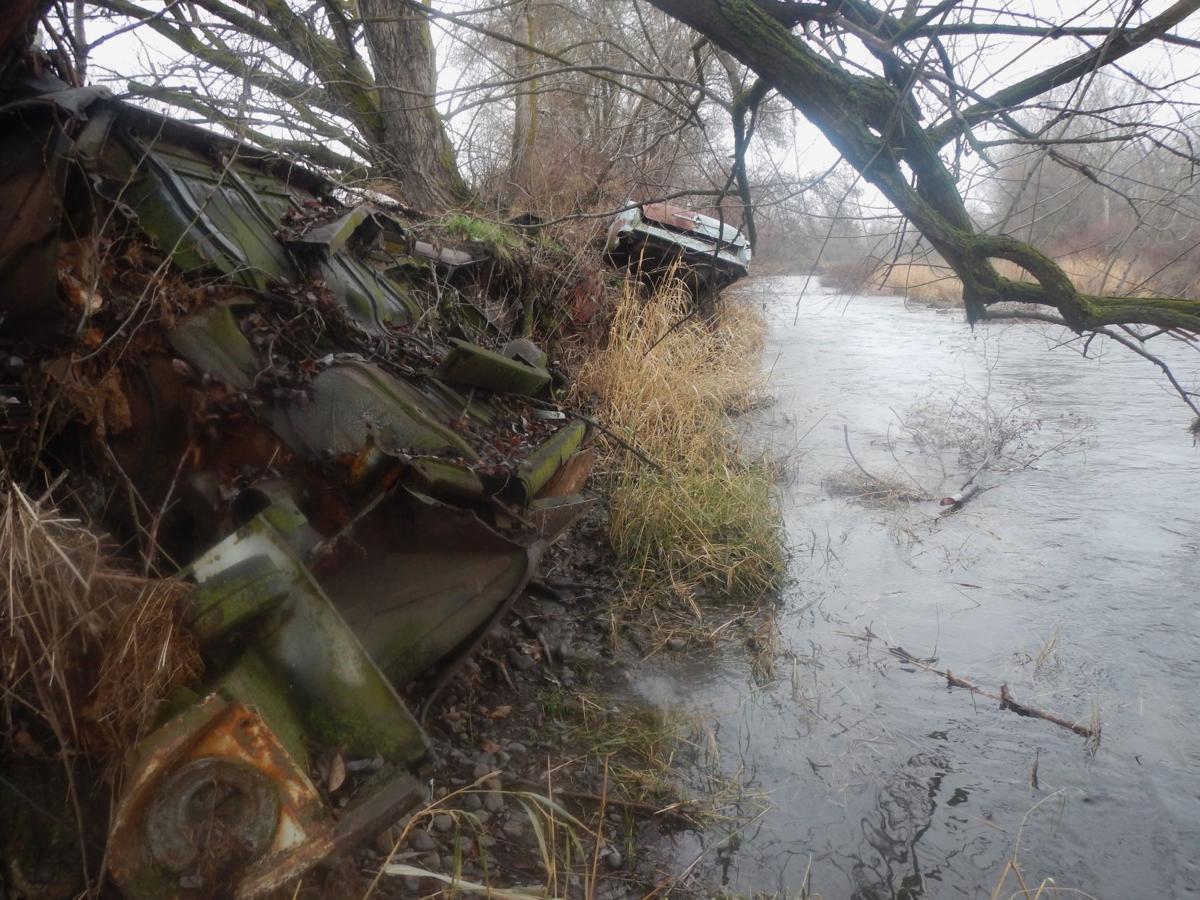 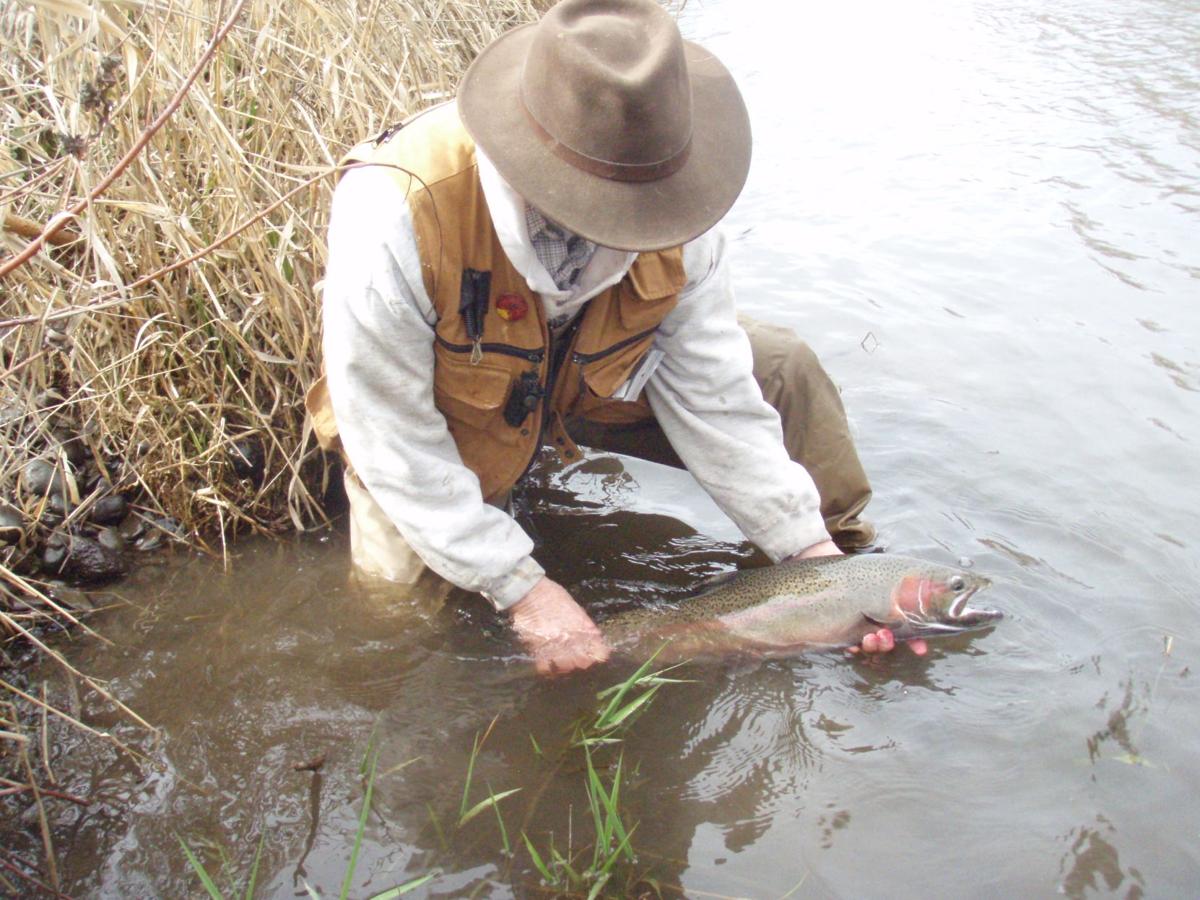 The author cradles a late-season steelhead for release. Bait fishing may have been involved. 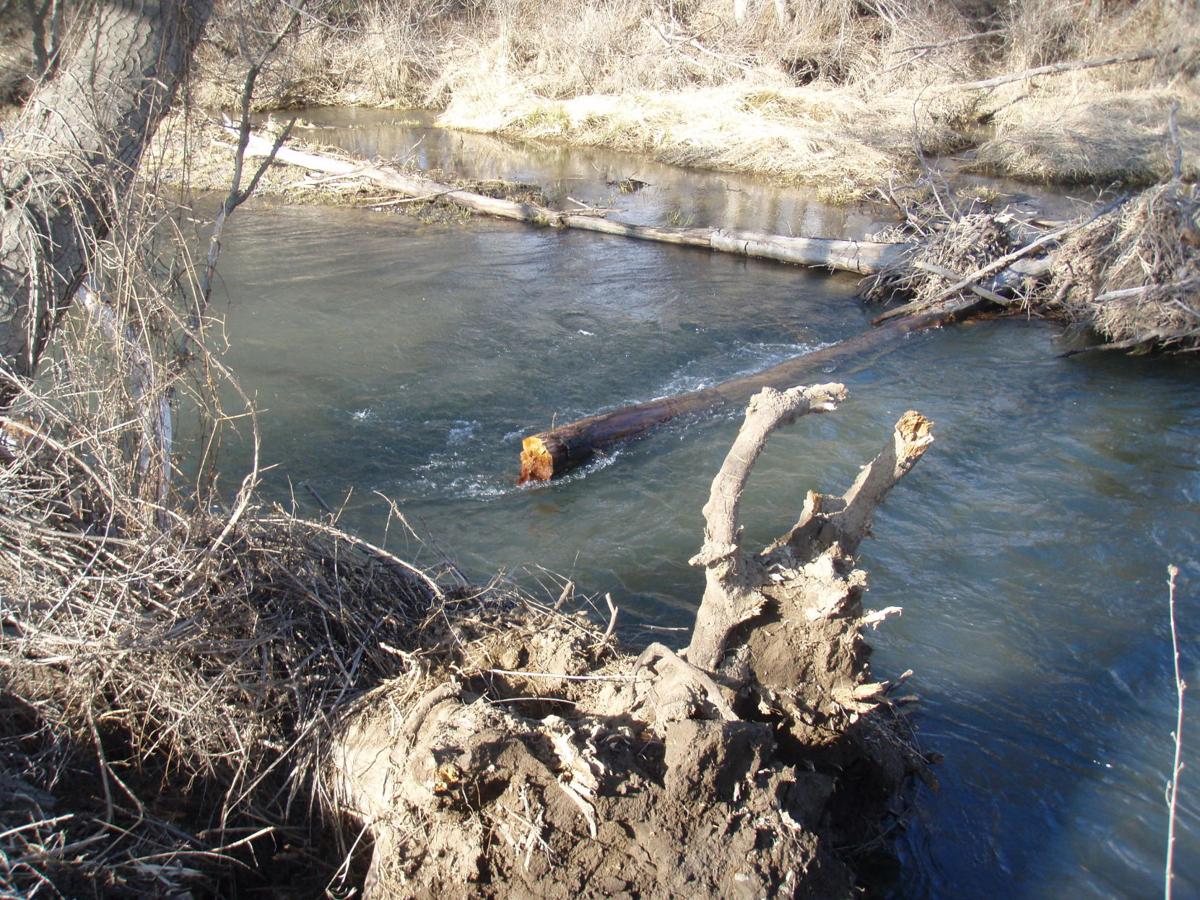 Steelhead that overwinter in Blue Mountain tributary streams find cover in the form of root wads, logs, and large boulders. Somewhere in this photo a steelhead was hooked. Landing it turned out to be a challenge. 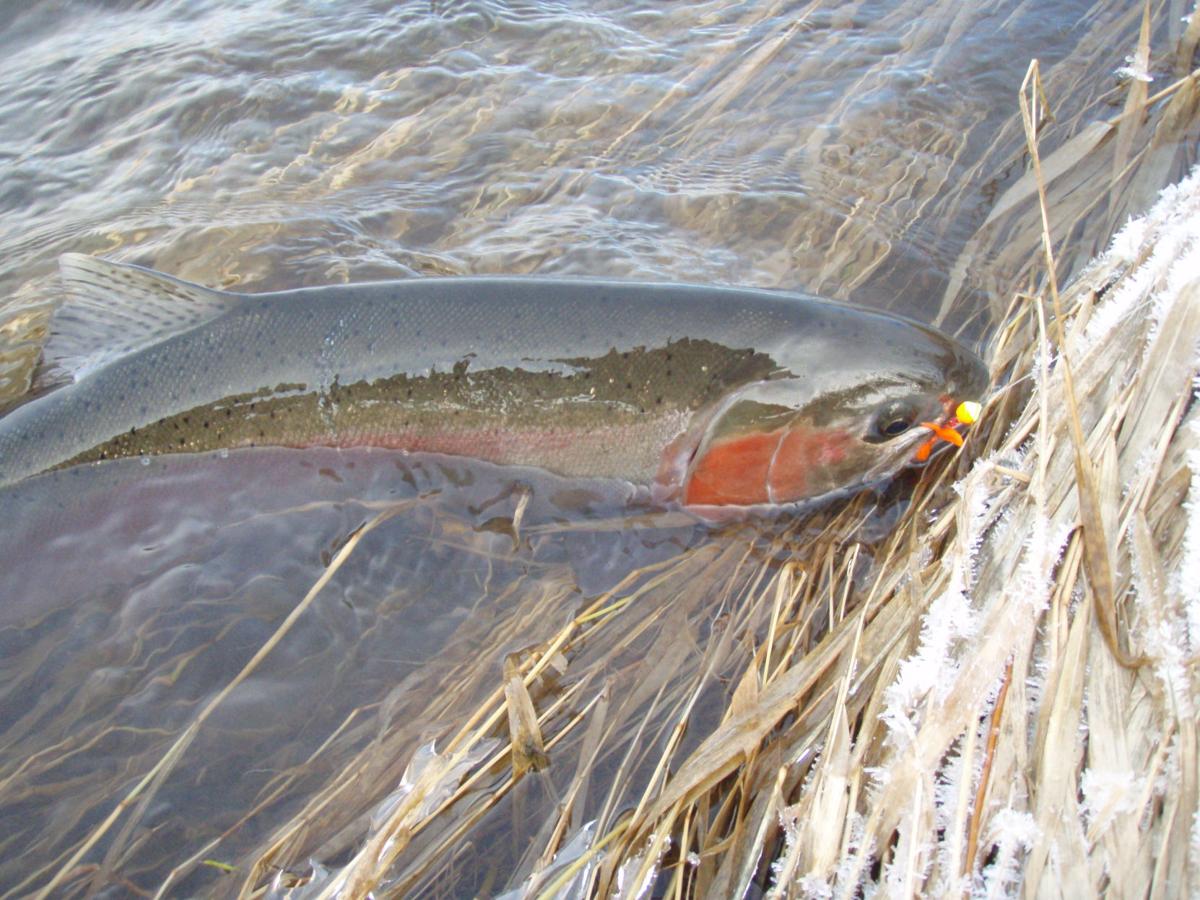 This 8-pound hen steelhead was eased to the shore for release after being fooled with a two-tone corkie over a yarn fly.

The author cradles a late-season steelhead for release. Bait fishing may have been involved.

Steelhead that overwinter in Blue Mountain tributary streams find cover in the form of root wads, logs, and large boulders. Somewhere in this photo a steelhead was hooked. Landing it turned out to be a challenge.

This 8-pound hen steelhead was eased to the shore for release after being fooled with a two-tone corkie over a yarn fly.

WALLA WALLA, Wash. — It is late January on the lower Walla Walla River and steelies are hiding out like big sea-going trout do when they are penned up in small water. Cold sleet spits sideways and my rod guides are iced up. I sit on a frozen tuft of reed canary grass and regroup after fishing two honey holes without so much as a bump.

I’ve chased steelhead from Lowden to the Whitman Mission for over 30 years. Local Native American tribes refer to this landscape as “place of many waters,” due to a myriad of tributary creeks that collect rain and snowmelt from the Blue Mountains. Cottonwood, alder, and brush willow outline the river’s flow where it splits a floodplain stretching a mile or so wide between low hills of glacial-age loess. The surround is raptor country, open ground where kestrel, northern harrier, and red-tailed hawks maintain vigil. A low, gradient stream channel cuts through dark silt-loam pastures to create broad oxbows, long runs and deep, languid pools.

A mix of private and public property limits angler access to WDFW Sportsman “Feel Free to Hunt/Fish” areas and adjoining farmland whose owners are fisher-friendly. My ability to sweet-talk one such landowner afforded me fishing rights today via one barbed wire and one electric fence. The latter I rolled under like it was day one of boot camp.

Slipping out of low-lying mist, another angler wades across the river and pauses upstream from where I sit. A flycaster. I watch him dab a weighted nymph into a shallow run where current breaks over a lineup of large cobble. A steelhead parking spot when they are on the move, but not today when the river runs low and clear. I eye the thumb-sized gob of cured roe attached via egg loop to a No. 1 barbless Gamakatsu hook. Ironically, my bait is from a hatchery steelhead caught swinging flies on the Hanford Reach earlier this season.

The resonant feel of bouncing No. 5 split shot on cobble takes me back to my first steelhead. A fat juicy nightcrawler threaded on a No. 6 Eagle Claw “hook ’em and hold ’em” snelled hook, adorned with a hank of red yarn, fooled that extraordinary fish.

Although I confess to a depraved lifestyle when it comes to bait fishing for steelhead, I know the difference. There’s no better feeling than watching a trout come out of its protective lair to rip on a Royal Wulff. Indeed, the best way to entice a hungry trout from behind a sunken branch or midstream boulder is often with a well-placed fly.

The same behavior does not hold true for most steelhead that overwinter in Blue Mountain streams. Possessing no more than remnant feeding instincts and a need to conserve energy, they hunker down in a deep pool or point their snout halfway up a sunken root wad until it’s time to spawn. Knowing their motivation, I deploy bait in Blue Mountain tributary streams for the same reason I swing an Intruder in the Deschutes and Columbia rivers. That is, to deliver an offering to a location where a steelhead might be induced to strike.

My bum knee stiffens so I shift position. It is turning into a day of too much thinking when I could be fishing. The lone fly fisher approaches within a few strides to shake me from my thoughts.

“Not bad.” I reply. “Just taking a break. Caught anything?”

“No, but I’m in no rush. My wife is picking me up at the next bridge.”

“Sounds like a great way to spend a day.”

The odds are good he will have the entire stretch of river to himself along with several hours to enjoy the stroll. I want to inquire if he fishes here often, and if so, does he have success with a fly? Sensing I have already been pegged for a lowlife, I let it go.

My conscience eases when the fly fisher fords the river and disappears around the corner like the ghost of Marcus Whitman. Good riddance, I say to myself. I have the river to myself, not to mention first shot at the deep swirl hole he skipped because it was too difficult for him to work with a fly.

Still, I muse, there are places where I might nymph a Glo Bug or drift a feathered jig below a bobber, although neither technique would separate me from the casual bait fisher except by choice of rod and reel. Meanwhile, and until I bring my 7-weight Cortland fly rod out of the closet, the occasional bait-fishing venture for steelhead in the stream of my youth remains a guilty pleasure.

Fellow fly casters might consider my choice of tackle to be backsliding, but I prefer to call it casting to memory lane.

Dennis Dauble is a retired fishery scientist, outdoor writer, presenter, and educator who lives in Richland, Wash. For more stories about fish and fishing in area waters, see DennisDaubleBooks.com.