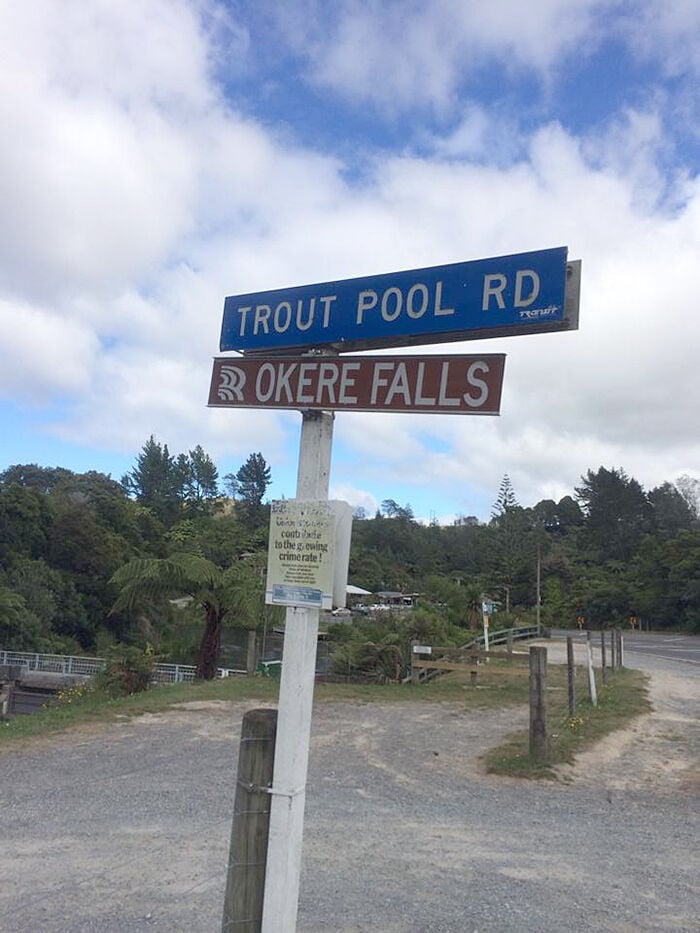 Trout fishing is intertwined with Kiwi culture. This sign near Rotorua, New Zealand, not far from the Okere River fish hatchery, was a testament to how difficult it will be to overcome hatchery trout culture. 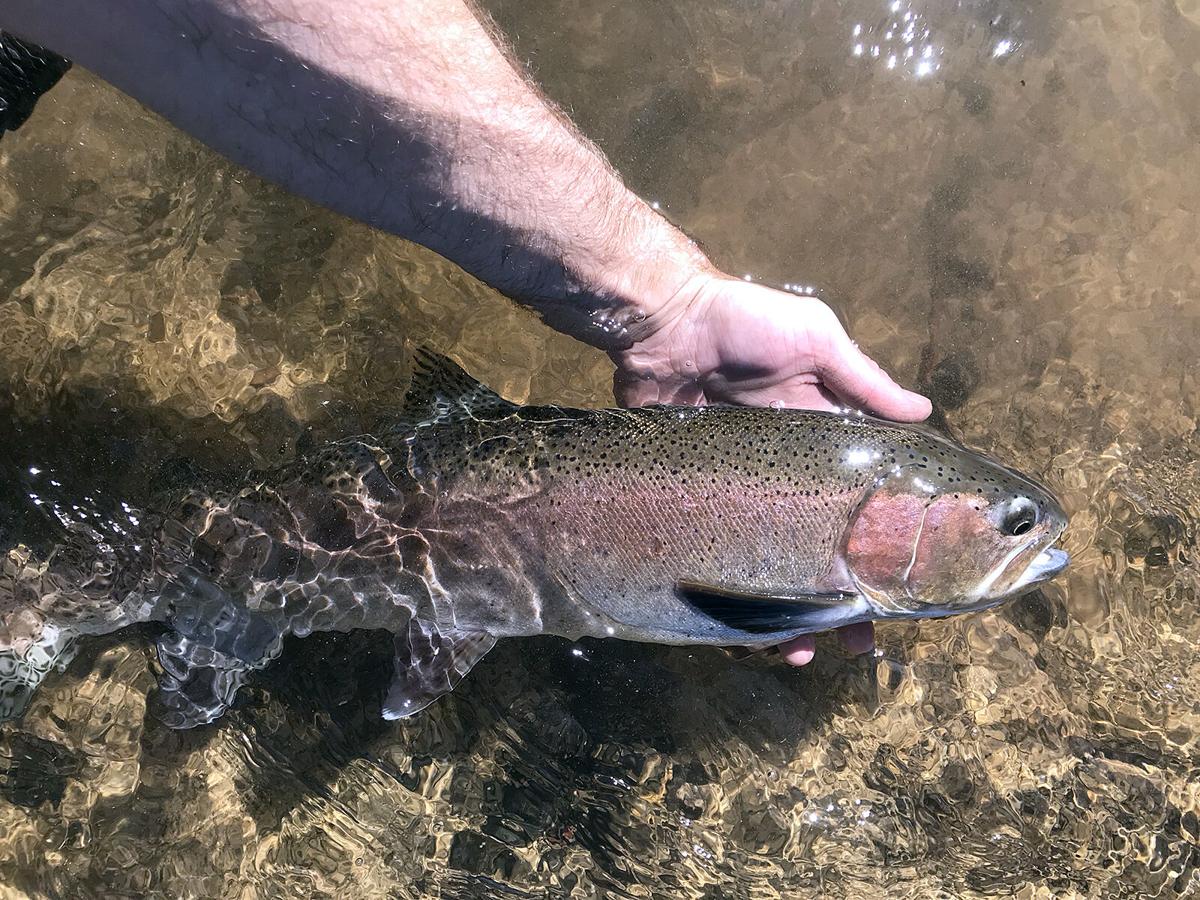 To protect native rainbow trout like this, we need to stop corrupting their genetics with non-native strains of hatchery rainbows.

Trout fishing is intertwined with Kiwi culture. This sign near Rotorua, New Zealand, not far from the Okere River fish hatchery, was a testament to how difficult it will be to overcome hatchery trout culture.

To protect native rainbow trout like this, we need to stop corrupting their genetics with non-native strains of hatchery rainbows.

CHEROKEE, N.C. — Anglers stood shoulder-to-shoulder. Bobbers and indicators alike pockmarked the river between more active anglers trying to make their own Gordian knot by whipping dry flies and spinners and spoons through the madding crowd on the fringes of America’s most-visited national park in the Great Smoky Mountains.

Intellectually, I knew what the cross-section of humanity was collectively fishing for, but I couldn’t wrap my head around it. Surely, I mused to myself, there must be a striper run or Atlantic salmon or something more worthwhile than planters. But there wasn’t. And don’t call me Shirley. The shoreline army was plodding along in hopes of catching hatchery rainbow trout.

They are planted in pristine mountain streams, reservoirs, community ponds and massive river systems. They are often planted only to die in a few days or weeks when waters warm and turn anoxic, but in flowing waters, many rainbows cling to life and establish viable populations, creating new fisheries in places that had never before seen a salmonid.

At first, the fish native only to western North America and eastern Asia was moved to other environs in North America. Then Europe. Finally, the rest of Asia, parts of Africa and even Australia decided to taste the rainbow, making this fish one found on every continent save for Antarctica. That said, the steelhead established south of the Tierra del Fuego in Chile and Argentina feed in the cold waters not far from the icy continent.

While the popularity of trout fishing is undeniable, and the money the sport generates is significant, the ecological impact — something almost never talked about — is devastating.

Wildlife managers refer to invasive species as “invasive” only until they become established and carve out their own ecological niche, at which point they become “naturalized.” The process takes years. In virtually every major river system south of the Arctic circle, once-invasive common carp have become naturalized. They are not native, and they certainly harm the ecosystem at some level, but said ecosystems have (mostly) adapted. The real harm from carp comes when they alter water quality by rooting in the streambed, stirring up sediment and removing aquatic vegetation. The degraded habitat can, over time, harm native fishes, but 4-of-5 baitfish agree: habitat degradation is better than being eaten.

Unlike carp, trout are predatory. In the vast majority of its native range, the rainbow trout is the apex predator. Fully grown rainbows have no predators. In many environments to which it’s been introduced, it does not fill that same niche, so rainbows tend to behave differently in said waters, filling the role of omnivore or scavenger, displacing native minnows, sunfish or whatever native species finds itself suddenly competing with rainbows.

In New Zealand, a world-class fishery for naturalized rainbows, as many as a dozen native fishes have become endangered by the introduction and continue to decline. Similar impacts have been felt in the Eastern United States, Canada, Europe, Africa and Asia. Rainbow trout are introduced because they’re pretty, fun to catch and passably edible, so they throw them into a river with no regard for what will happen.

While we can look all over the world for the harm caused by introducing rainbow trout to waters they haven’t historically swum, look no further than the United States. Since trout anglers — primarily the flyfishing elite — control wildlife management agencies in virtually every Western state, I’ll make my appeal in this way: introducing rainbow trout is killing off other trout.

Rainbow trout were introduced into the Great Lakes as early as the 1880s, leading to the slow decline of the lake trout fishery.

Rainbows were introduced east of their native range in what is historically cutthroat trout territory, leading to the extinction of two cutthroat subspecies and threatening half a dozen others.

Reason: Rainbows and cutthroats are in the same genus and are capable of hybridizing. Since they have very similar behavior patterns, spawning cycles and feeding habits, where the two fishes overlap, they routinely hybridize. This led to the extinction of the highly localized yellowfin (Colorado) and Alvord (Oregon and Nevada) cutthroat trout and has led to the the severely endangered status of the greenback cutthroat trout.

Reason: Where hatchery rainbows have corrupted the genetics of native stocks, natural disease resistance has been lost or reduced. Further, hatchery stocks have spread whirling disease, a fatal disease for all salmonids, all over the world. Unique genetic lineages have been watered down or lost entirely, and special stocks capable of reaching epic proportions have been negatively impacted by smaller, less resilient hatchery fish.

Do hatcheries serve a purpose? Absolutely. Hatchery trout are fine in closed-system lakes with few or no native species. The mountain lakes with no native fishes and the community put-and-take pods are perfect places for hatchery rainbows. Everywhere else, not so much. The change won’t happen overnight, but hopefully, someone with the power to make a change reading this somewhere will get over the rainbow.