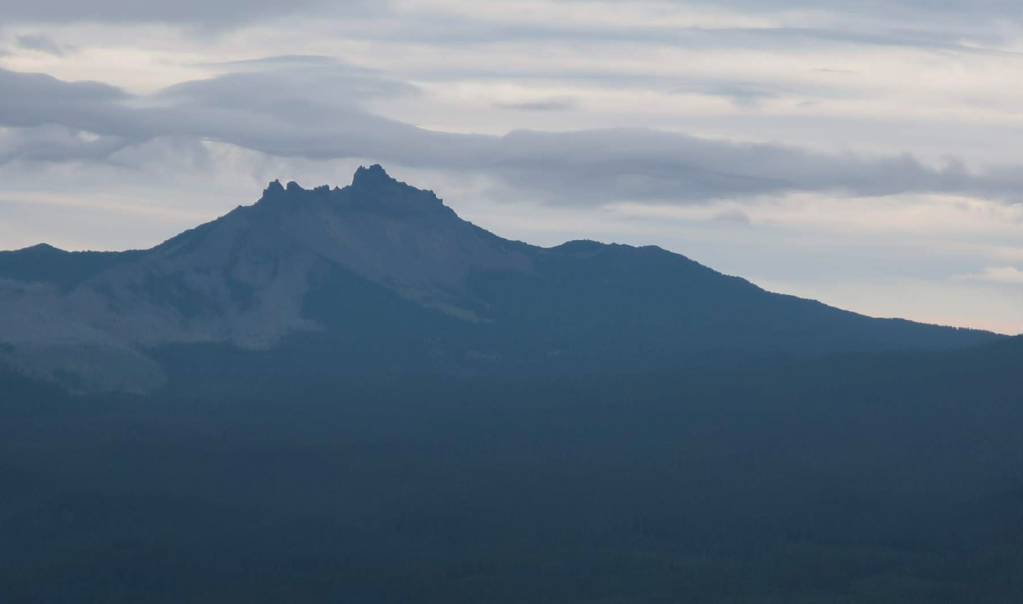 A view of the surrounding mountains, just before being covered by rain-bearing clouds. 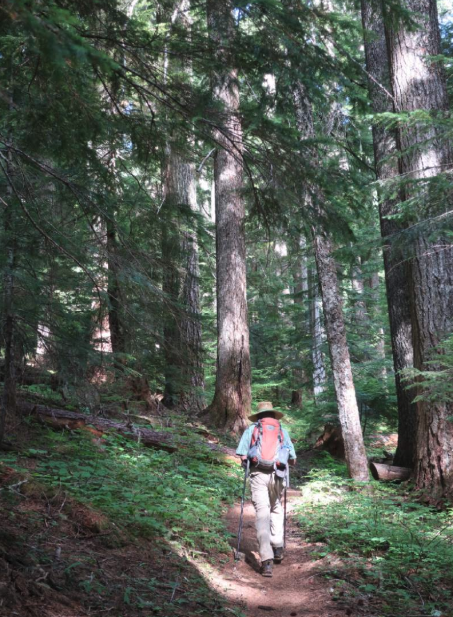 Hiking the Middle Pyramid trail through an old-growth forest. 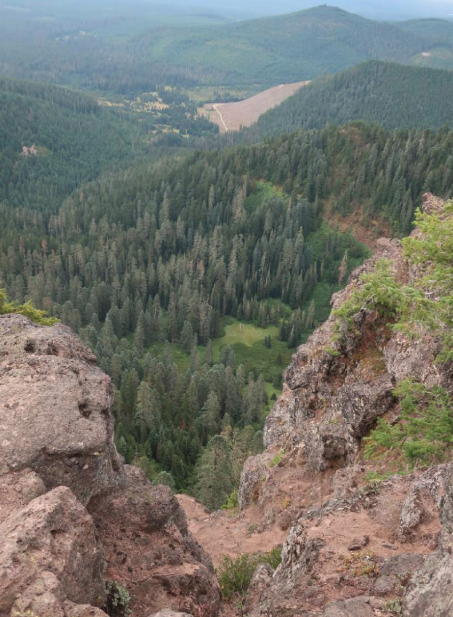 Looking down into the Middle Santiam’s deep canyon.

A view of the surrounding mountains, just before being covered by rain-bearing clouds.

Hiking the Middle Pyramid trail through an old-growth forest.

Looking down into the Middle Santiam’s deep canyon.

BEND — You don’t have to go to Egypt to see the Pyramids. That’s because the Three Pyramids, mountains created long ago by volcanic action, are close by for the viewing and, at least in the case of the Middle Pyramid, for the climbing.

Reaching the Middle Pyramid is a pleasant hike, only a little more than 2 miles from the trailhead. But that’s a challenging 2-plus miles because mountaintops like the Middle Pyramid require some uphill hiking, in this case an elevation gain of nearly 1,800 feet.

Located in the Central Oregon Cascades, the Three Pyramids are a trio of volcanic plugs that are part of the Old Cascades. As my hiking buddy Steve Underwood and I learned later, the Cascades are two mountain ranges in one. The better-known High Cascades mountains include such prominent 10,000- to 14,000-foot peaks as Shasta, Hood, Jefferson, Adams and Rainier. According to geologists, the Old Cascades, which form the foundation of the High Cascades, are older and lower, with many summits only 4,000 to 5,000 feet high. The Three Pyramids, with elevations of 5,690, 5,618 and 5,480 feet (from south to north), are part of the Old Cascades.

Even though the Middle Pyramid is not a dominant peak, we hoped to enjoy what we had been told is a wide-sweeping panorama from its summit that includes the Three Sisters, Mount Washington, Three Fingered Jack, Mount Jefferson and, if lucky, Mount Hood. The promised views from atop the Middle Pyramid were part of the trail’s allure but, as we found, the journey itself was rewarding.

Shortly into the hike, the trail crossed a footbridge over a creek before grinding steadily uphill, the first mile-plus beneath towering stands of old-growth trees. Providing colorful diversions were pockets of wildflowers — columbine, larkspur, salmonberries, paintbrush and penstemon — along with bracken ferns. When the trail left the forest, it zigzagged along a ridge, providing looking-down vistas of lush alpine meadows and the deep canyon of the mostly hidden Middle Santiam River, and, up above, the Middle Pyramid’s ragged west wall.

Our solitude was delightfully broken by the chirrupy sounds of a group of young hikers happily making their way back down the trail. They excitedly told us about a section near a rocky saddle where the trail seemingly evaporated and how they had to climb over some rocks to reach the summit. And even more animatedly, they anxiously warned us about nests of stinging hornets.

We found the semi-hidden trail and, just steps from the summit, cautiously and quietly tippy-toed past hornet’s nests flanking both sides of the trail.

And on the small flat-topped summit, we saw the shattered remains of a lookout tower that was abandoned 40 years ago. Because of the tight space, it seemed a strange fit, but because of the view we did not wonder why it was built.

As promised, snowy peaks surrounded us. But not for long. Within minutes, fast-moving clouds began blanketing the neighboring mountains. Ominously darkening, the clouds quickly enveloped peaks we had time only to take a peek at.

We pulled out our rain gear and began our downhill retreat. Droplets transformed into steady rain and, briefly, into a full-blown cloudburst and downpour.

As we made our way down, the heavy rain diminished to light showers to semi-clear skies.

Forget traveling to Egypt. You will not find tombs for pharaohs or queens, but the Three Pyramids, and the Middle Pyramid, offer an experience fit for a king.

From Pendleton, take Interstate 84 west for 107 miles to Biggs Junction. At the junction, take US-97 south for 136 miles to Bend. From Bend, take U.S. Highway 20 west for 48 miles. At the junction, go left on state Highway 22 West. Continue on Highway 22 for about 7½ miles. Between milepost 76 and 77, turn left onto Lava Lake Meadow Road for about 2 miles, cross the Park Creek Bridge, then turn right on Road 560 for 3½ miles to the trailhead.