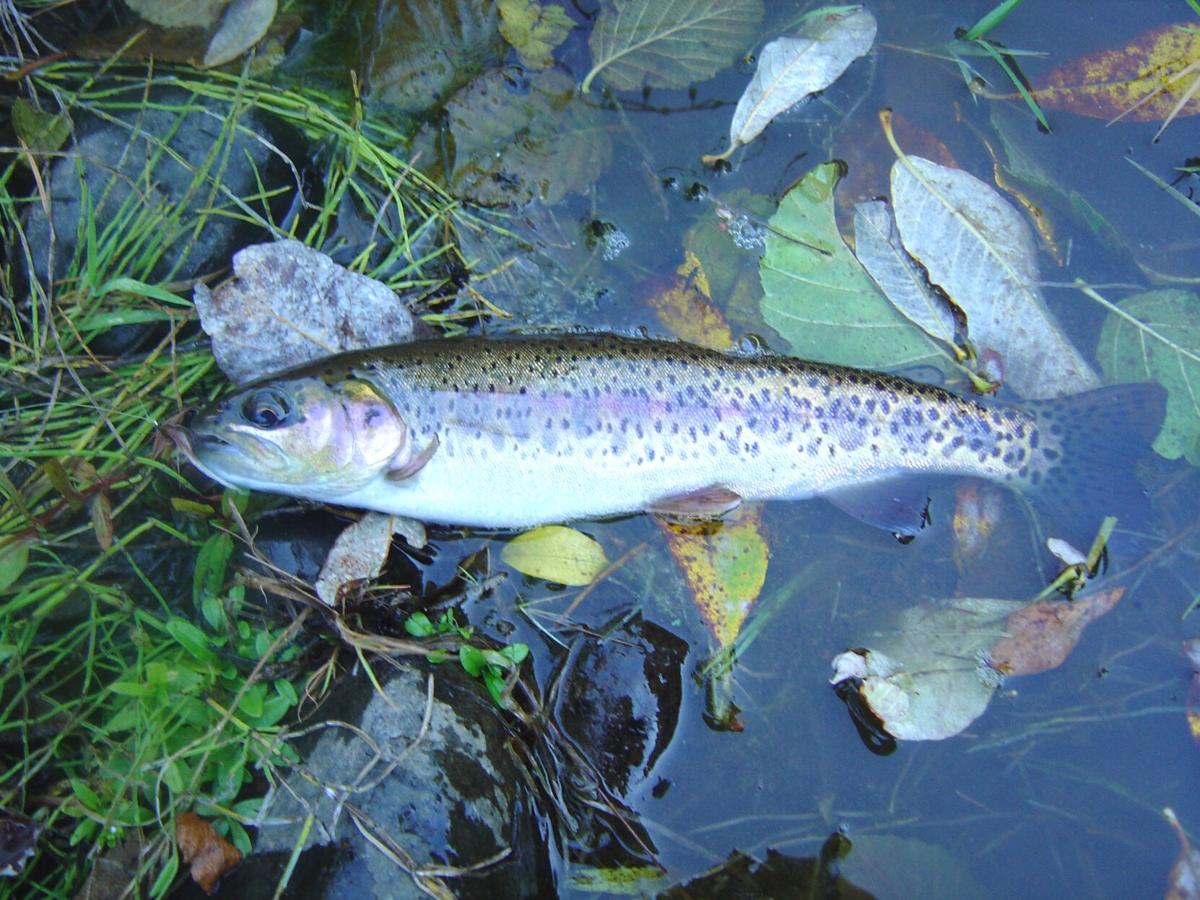 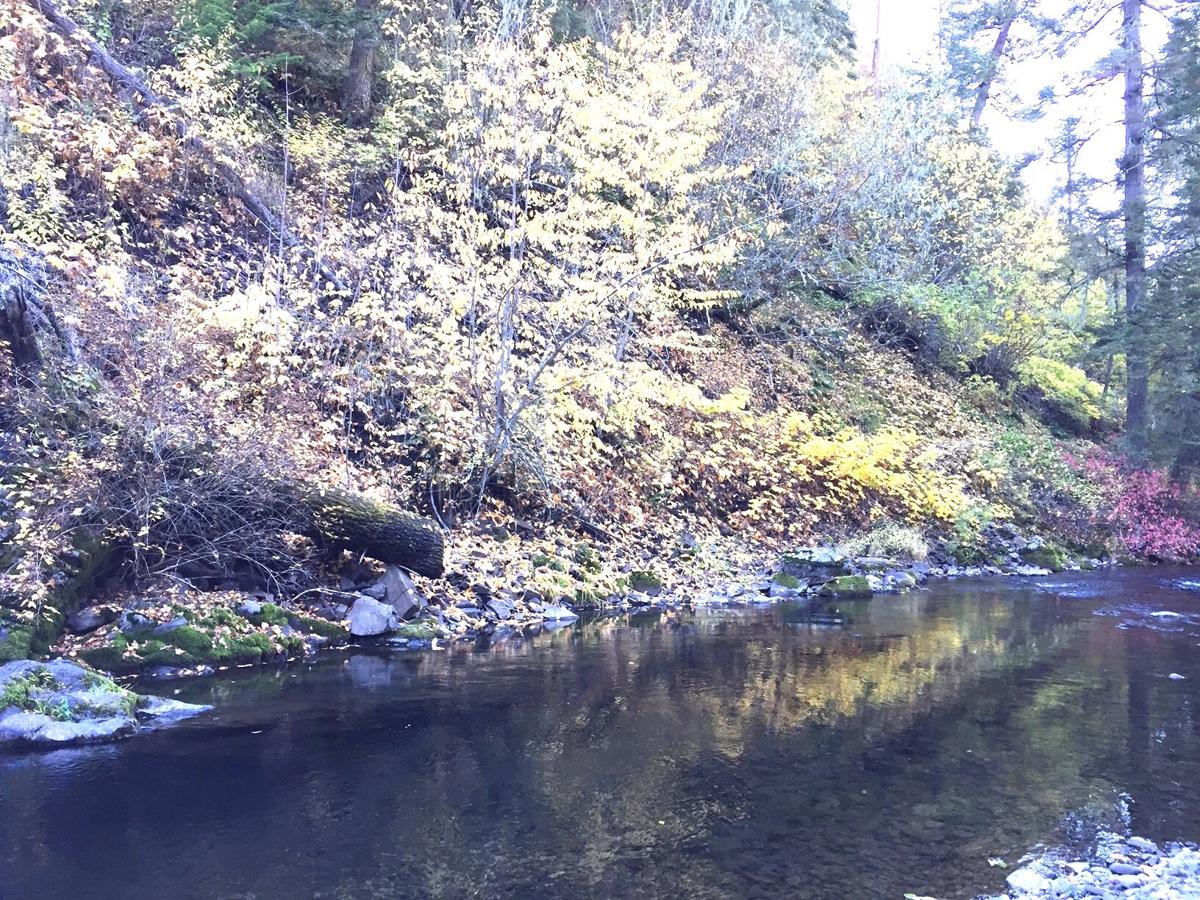 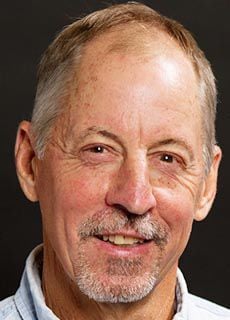 Each fall for three decades, my family staked a worn canvas tent at the confluence of the North and South forks of the Umatilla River. The rustic U.S. Forest Service campground was always empty except for the occasional deer hunter.

As toddlers strapped in a backpack, Diana and Matthew watched me cast to rising trout. Later, when turned loose to develop their own outdoor skills, they met up with wandering porcupine, ruffed grouse, dipper birds, crawdads, ladybugs, October caddisflies and long-eared bats. Cool fall afternoons spent hiking along beaver marshes, filling tin cups with fuzzy caterpillars, and poking at deer and bear scat rooted them in the natural world.

A kaleidoscope of color presides over rugged basalt outcrops, steep slopes and brushy draws of the Umatilla River canyon in early October — golden glow of tamarack, burnished orange of sumac, blood red of maple and elderberry. A tradeoff to autumn’s quiet senescence is the inevitable cascade of leaves that drop from streamside alder, line the bottom of the river and confuse a fly fisher view of the underwater world.

Because the Forks campground configures deep within the apex of competing ridges, the sun sets early to turn night air chilly. Not until waking up to find a skim of ice in the water bucket did I upgrade our ancient army surplus goose-down mummy bags to oversize canvas sleeping bags rated at minus-10 degrees. Soft flannel lining imprinted with flying ducks, the new bedrolls could be doubled up to accommodate two bodies when spooning came to mind.

Over all those years, there remains but one painful memory. It occurred on a trip when I couldn’t talk the rest of the family into an overnight stay. Our children had reached an age when they would rather hang out with friends than camp with their parents and Nancy was no longer thrilled about smoky campfires and sleeping on the ground. After much arm-twisting, everyone agreed to a day of fishing followed by hamburgers grilled over an open flame.

On that special Indian summer afternoon, insects buzzed, sunbeams danced, and eager trout rose to the fly. Only when I began to lay the fire for cooking dinner did I miss my trusty double-bit ax. No worries, for I gleaned dead fir branches from the forest floor. In the middle of my jumping and busting of kindling, Nancy got into a directing mode, a role she performed with aplomb due to her training as an elementary school teacher. “You’re going to hit yourself in the head,” she said, when I sent a large chunk of wood flying across the campsite. “Why don’t we help out?”

The offer of assistance led to her and daughter, Diana, standing on one end of a particularly resistant branch while I jumped on the other. Unfortunately, the physical law of lever and fulcrum took precedence. I jumped, the branch didn’t break, and they catapulted through the air. Before I could separate the crumpled pile of arms and legs, Nancy grabbed her ankle and screamed, “It’s broken!”

Unfortunately, the outcome was obvious. Nancy’s ankle twisted at an odd angle and the broken tip of a fibula pressed against skin.” I lifted her into the car, tossed our camping gear in the back, and dragged hungry Matthew from the picnic table. “Aren’t we going to cook hamburgers?” he asked, as we sped to down River Road.

The 40-mile drive to St. Anthony’s Hospital in Pendleton occurred in record time, where the emergency room physician asked, “What is the problem?’

“I broke my ankle, Nancy replied.

“Forgive me. I’ll be the one to diagnose it,” he said.

Surgical repair of Nancy’s “green stick” break took place the next day back in the Tri-Cities. Screws and metal plates were involved.

A few years passed before I talked Nancy into revisiting the scene of the crime. By then, we were empty nesters getting used to the idea of each other again. It was just the two of us. Like the days before children. When life was simpler but not as interesting. We settled in our favorite camping spot on the North Fork arm and spent the day hiking the wilderness trail and casting for wild rainbow trout. Nancy caught twice as many fish using grasshoppers impaled on a bait hook than I did tossing a No. 10 Joe’s Hopper with my fly rod.

After dinner dishes were washed and put away, Nancy retired early to murmur sweet dreams in her flannel-lined sleeping bag. The tops of tall fir tossed in the wind and the North Fork gurgled as it ran fast over clean cobble. I poked at burning coals and reflected on the passage of time until the harvest moon rose slowly over Buck Mountain. As I recall, a star-studded night led to yet another ice in the bucket morning.

Dennis Dauble is a retired fishery scientist, outdoor writer, presenter and educator who lives in Richland, Washington. For more stories about fish and fishing in area waters, seeDennisDaubleBooks.com