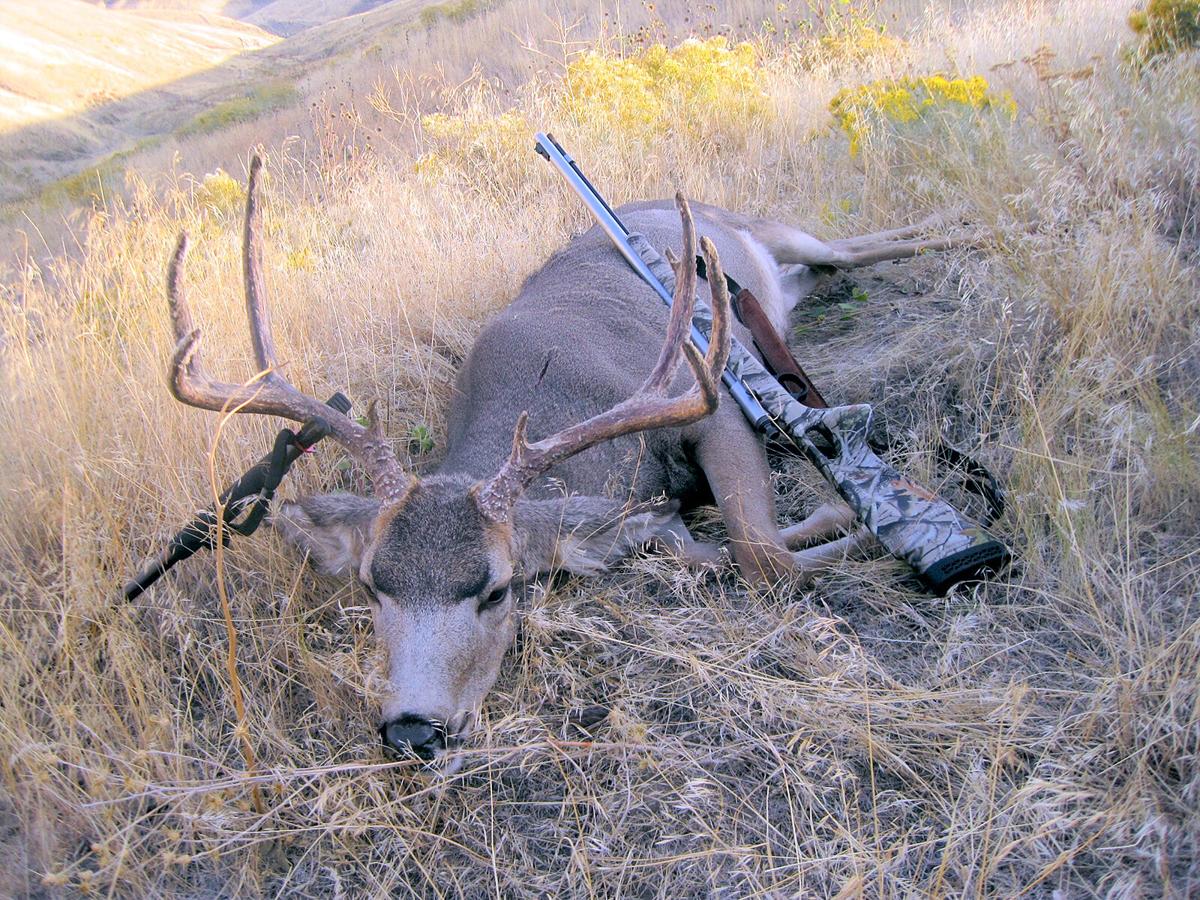 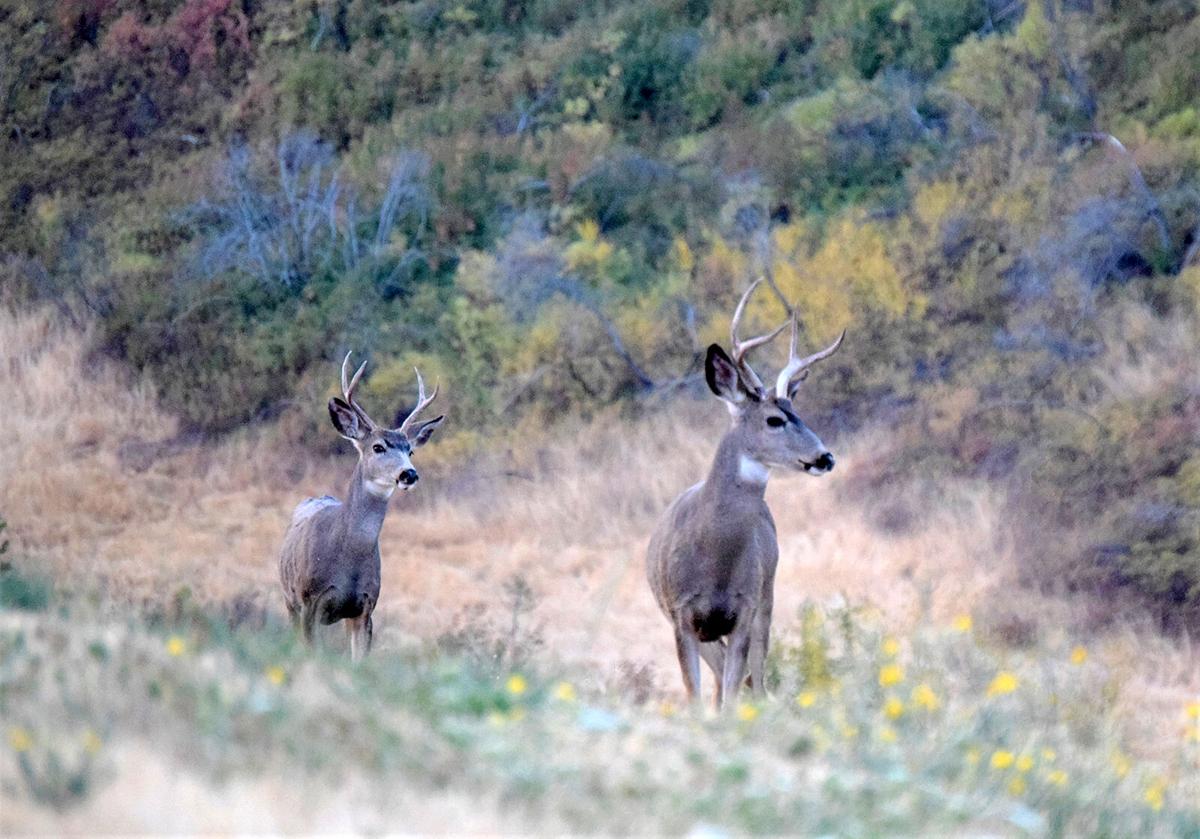 I’ve never experienced anything quite like spot-and-stalk mule deer hunting in the foothills of the Blue Mountains. The open expanse of golden wheat stubble and grasslands pressures a hunter into honing their creativity in the use of wind and terrain.

Having pursued my fair share of mule deer with the stick and string, I’ve found the muzzleloader season to be the most exciting. The modern smoke pole is highly accurate and provides a distance advantage over archery (at least it used to), but the relatively lightweight stocks pack a wallop of recoil.

Coupled with the old-fashioned fork sight, making the mark is something of a science. Being a scientist by trade, you would figure I’d have the game figured out by now.

On Oct. 3, my buddy Dean and I wandered onto an Eastern Washington “hunt by reservation” parcel as the first hint of dawn cracked amber on the eastern horizon. We picked a long ridge spine angling toward the furthest point from the road. Deer were scarce in the early dim, but as the sun climbed higher, mule deer appeared and vanished like phantoms of the prairie.

Of the 16 does I slipped through traversing the canyon floor, a single doe-fawn pair ran the entire length of the canyon, blowing the bucks from their bed. Luckily, Dean kept an eye, watching them bed again as I hiked a different ridge, still-hunting to the bottom into a bedding area wrought with powdered soil dugouts on the shady side of blooming rabbitbrush.

I studied the cracked soil between bunchgrass tufts as I hiked; my mind wandering back to the days before white settlers arrived. Pondering how many native Americans had hunted the same hills, what game they had taken and how they may have tried to pull a fast one on those bedded bucks. I always glance for stray arrowheads but never find them.

At the foot of the spine, the throaty percussion of a nearby muzzleloader seized my attention. Dean had apparently slipped in on the bucks while I devised my next move, taking a steady, calculated 90-yard poke at the bigger buck. As the smoke cleared from his shot, I propped my gun on the sticks in preparation. A wide rim separated us, and my gut suggested those bucks may escape in my direction.

Not 60 seconds later, three deer appeared, trotting the base of the rim and directly toward me. All three were healthy and largely unhurried. Peering through the binoculars I found the lead buck to be the big boy. But that fact became abundantly clear as the trio barely changed course, passing broadside at 40 yards, justifiably ignoring my very presence.

Tracking the lead buck with an unusual calm, the fork sight held at the point of the chest when the bolt broke free, crushing the musket cap and igniting the charge. The fork sight never left the buck, despite the heavy recoil. He was as good as mine. I had done everything right. Save for my (mis-) calculation of the collision point between lead and hide.

My main assumptions of bullet and mule deer velocity resulted in a clean miss, yet the soil beyond my moving target was wounded severely. I suppose muzzleloader loads carry some haste at close range, enough to have shot in front of the deer.

Dean appeared on the horizon as I gathered my thoughts and headed for higher ground. It was about noon and 85 degrees, so we headed for the rig. Among the wafting bunchgrass and the sting of starthistle stabbing through my Carhartt pants, I recalled a past season where I had calculated everything to perfection from stalk to shot, securing my only velvet buck, the skin and fuzz dried hard on the antlers, on Oct. 6. A beautiful 4X4 with a small bifurcation on the left G2 tine. I can still feel the strain of the pack straps against my shoulders and the burn in my thighs as I trudged with the quartered buck and rack packed neatly in one load.

The foothills offer what feels like a true western mule deer hunt, providing the expansive views and glassing opportunity that come to mind with dreams of sagebrush, hill country and the charcoal gray and forked-antler racks of Odocoileus hemionus. Early fall bucks can be predictable and the stalks exhilarating, punctuated with ample opportunity to fail, courtesy of being human. I could hear the echoing laughter of the Native American spirits as I climbed with an empty pack.