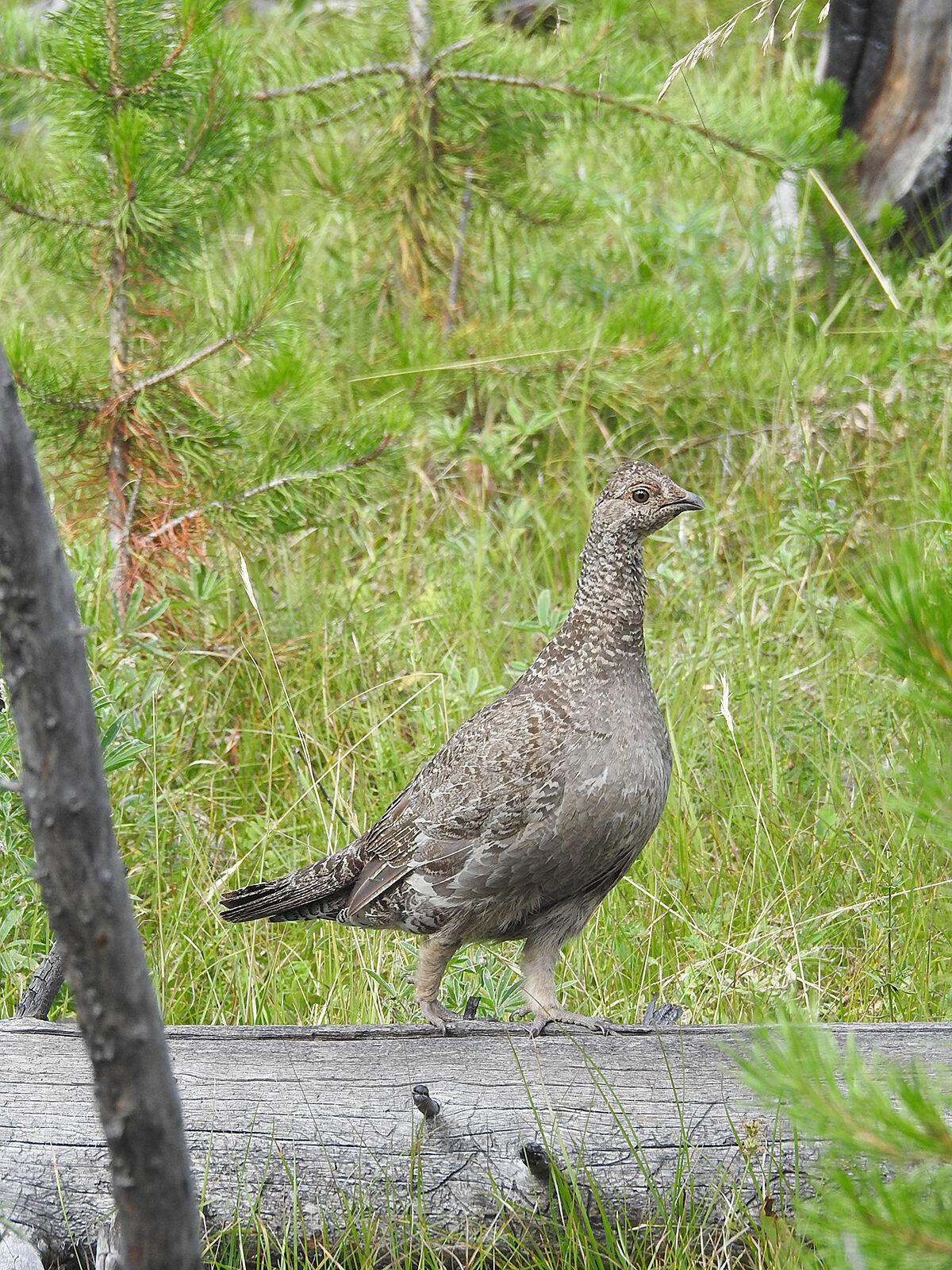 A forest grouse counts on stillness and its camouflage for concealment. 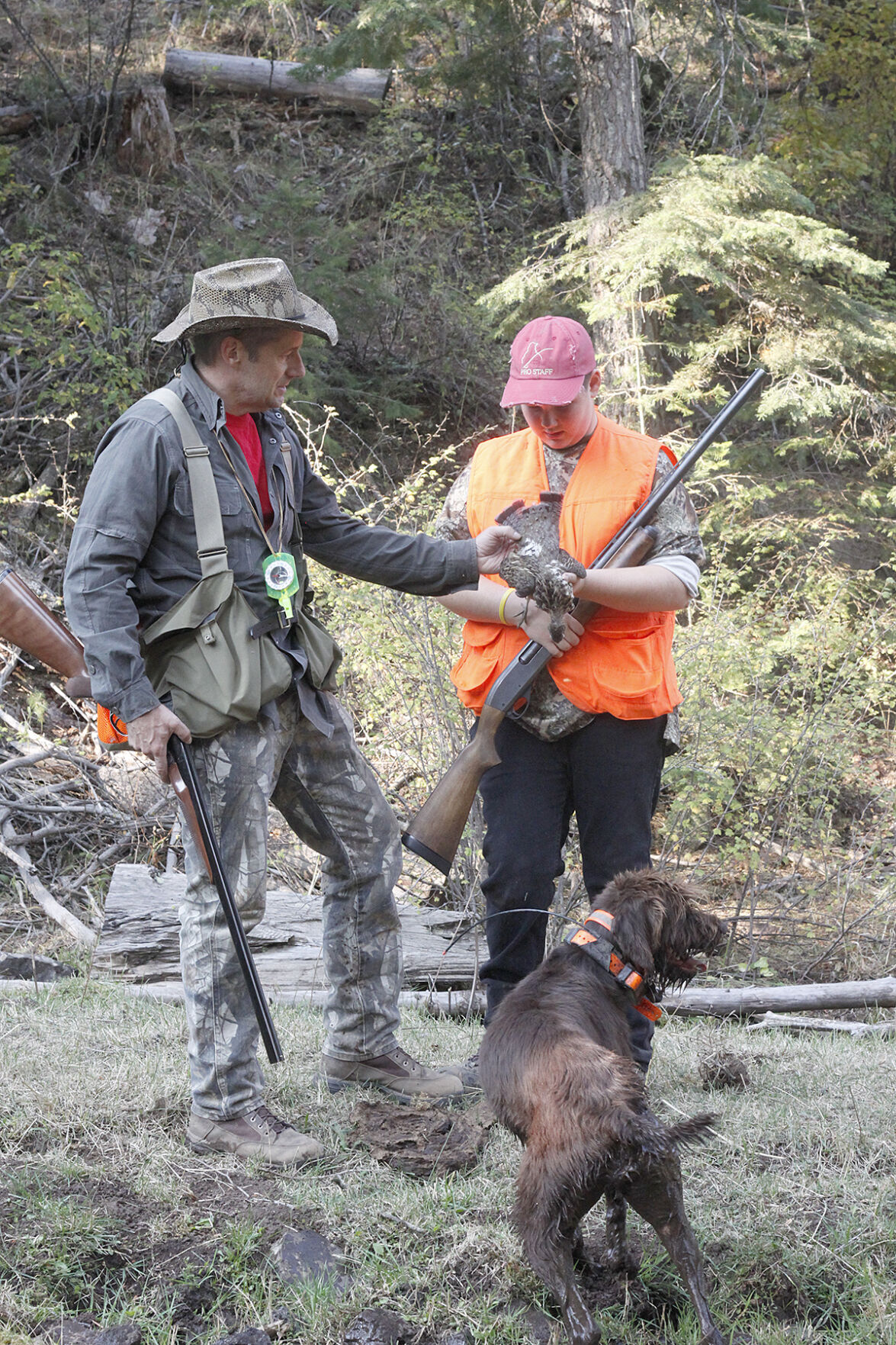 Thirteen-year-old Isaac Flaherty took his first ruffed grouse on a weekend hunt with Gary Lewis and Liesl the pudelpointer in the Imnaha Unit.

A forest grouse counts on stillness and its camouflage for concealment.

Thirteen-year-old Isaac Flaherty took his first ruffed grouse on a weekend hunt with Gary Lewis and Liesl the pudelpointer in the Imnaha Unit.

My friend James Flaherty and his son Isaac and I were scouting for mule deer, but we were excited about the prospects for grouse. The birds were there in large numbers.

I had talked to the fire lookout there before. After a few pleasantries, I remarked on the numbers of grouse we had seen already. He pointed at his truck.

“See the droppings? That’s just from today. The grouse like to roost on the cab.”

They must have been blue grouse. Ruffeds, in my experience, are usually found a bit lower, down in the canyons.

By the time we had talked to the lookout, both Isaac and I had three grouse apiece for the day. This was the 13-year-old’s first grouse hunt and it was shaping up to be one to remember.

Grouse hunts are not insignificant in my life. The first time Dad allowed me to tag along on a hunt, it was for grouse. The first game I ever cooked was grouse.

It must have been this way when the Nez Perce and the Umatilla walked these hills. The kids in the tribe would have hunted grouse with slings and stones and bows and arrows. Once they had success, and had brought some tasty birds back to the lodge, they’d graduate to bigger game like bighorns and deer and elk.

We arrived in late afternoon and had time for a quick hunt through a stand of alder at the head of a spring. Liesl, my young pudelpointer, locked up as soon as she approached the tree line. Isaac spotted the bird and walked it up and pointed his Remington 870. When the gun spoke, the dog dashed in and Isaac had his first grouse. It was the first grouse for the pudelpointer as well.

I had my chance to shoot a ruffed grouse over her in the morning. There were three in the covey and the biggest one blew out of a patch of berries. The bird crashed to a load of No. 7½s. This time I found the bird before she did in head-high willows.

There were two other birds with this one, we heard them beat their way up into trees. When I was ready to walk away, Isaac said he’d hang back. He figured two in the bush might be worth one in the hand.

When James and I were 30 yards down the trail we heard the bird fly and heard the sound of the shotgun as Isaac made a difficult shot through the trees. The boy and the dog made the retrieve together.

That evening, Isaac missed a difficult going away shot on a blue grouse.

Stiff and sore from walking all day, we worked our way back to the cabin where I cooked seven birds over a Camp Chef propane stove. I wrapped three of the breasts in thin-sliced ham, folded around mozzarella cheese. The rest of the grouse we ate the way nature provided them, savoring the taste of that Imnaha country.

The season for forest grouse runs from September 1 through January 31. Hunters should pack No. 7½s for ruffed grouse and No. 6s for blue grouse. The daily bag limit is three of each species and nine each species in possession. Hunters must leave head or one wing attached while in the field and in transit.

A hunter can voluntarily aid the state's management of these birds. The state collects population information from the wings and tails of forest grouse. Remove one entire wing and whole tail including the small feathers. Place in paper collection bags, one bird per bag. Mark the bag with species, date taken, county taken and general location. Drop off at designated collection sites (ODFW offices or collection barrels).

Gary Lewis is the author of "Fishing Central Oregon," "Oregon Lake Maps and Fishing Guide" and other titles. To contact Gary, visit www.garylewisoutdoors.com.