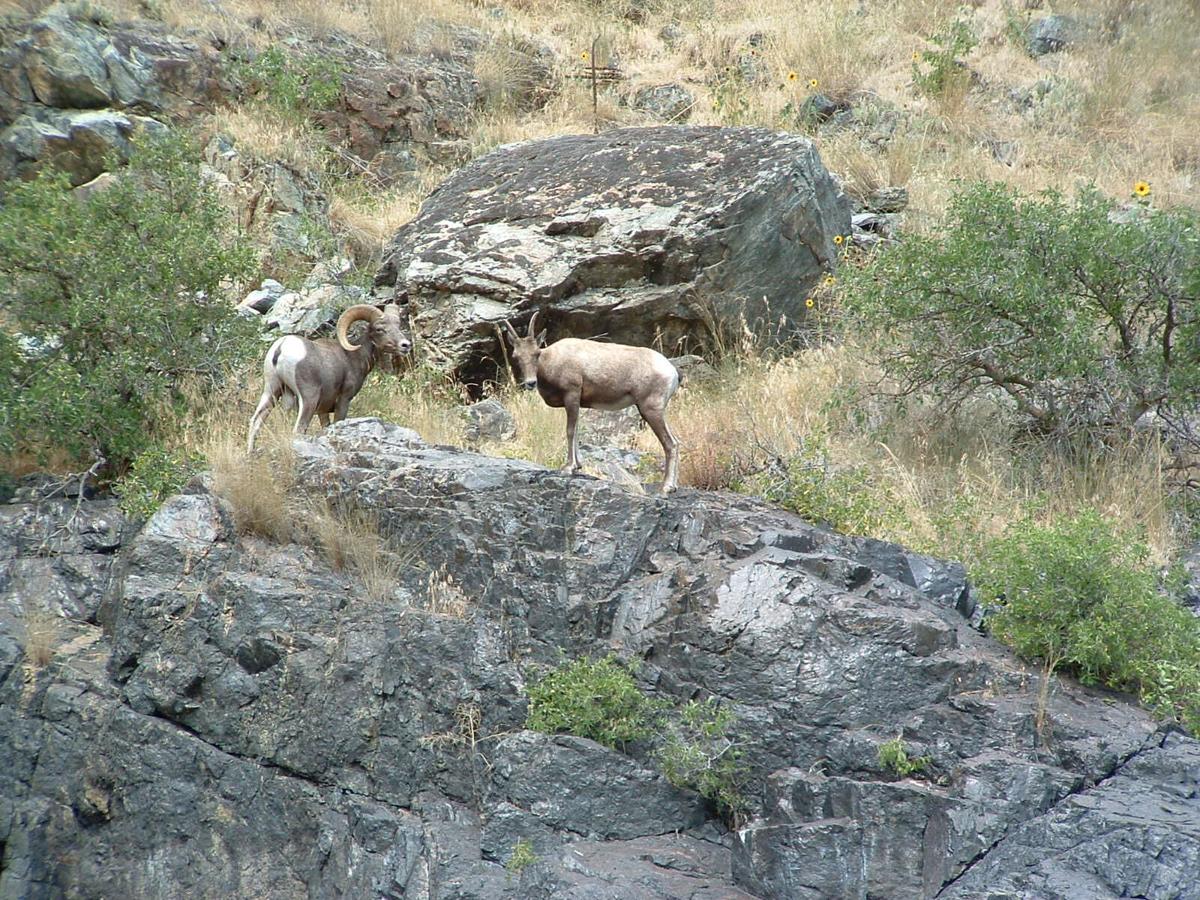 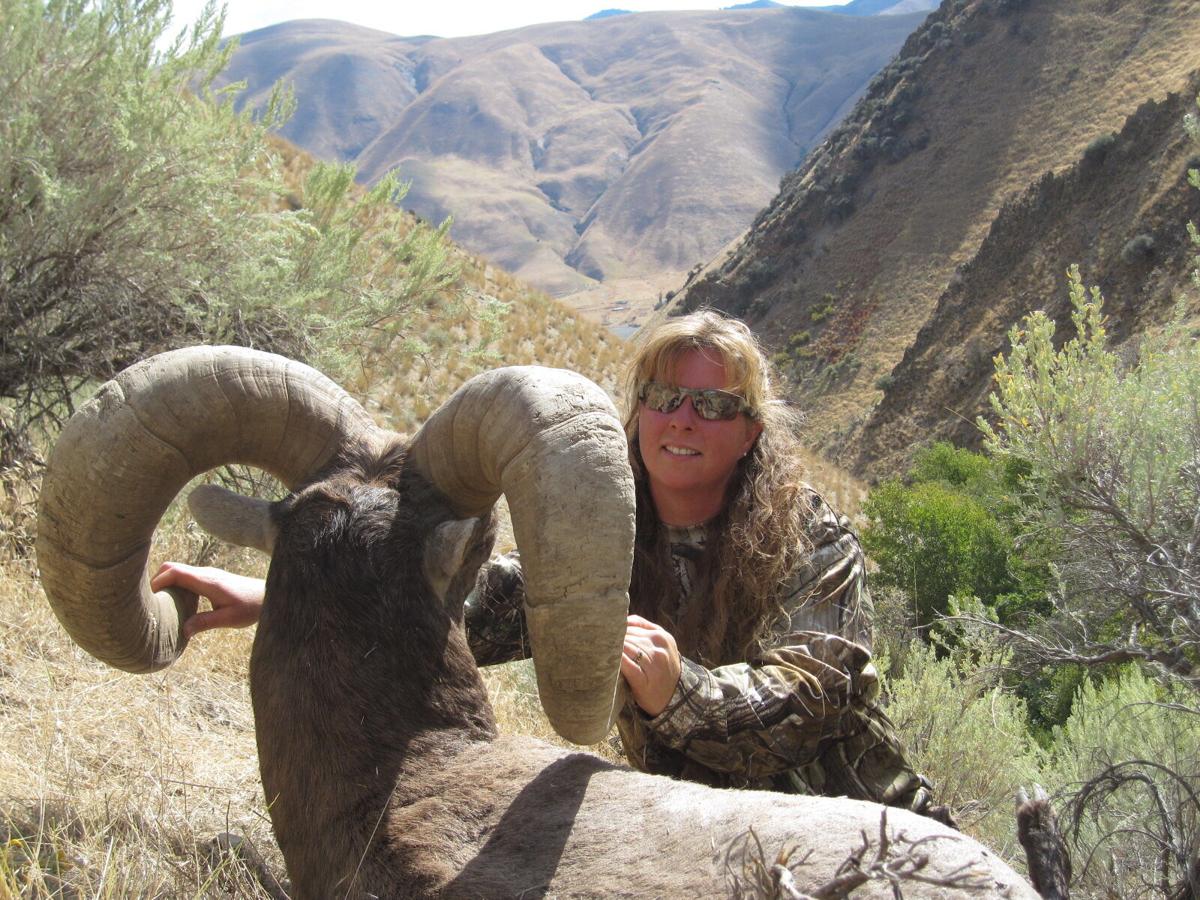 With a length of almost 40 inches, 16 inches at the bases, and 9¾ inches at the fourth measurement, the 8½-year-old ram proved to be the largest ever taken by a lady in Oregon. 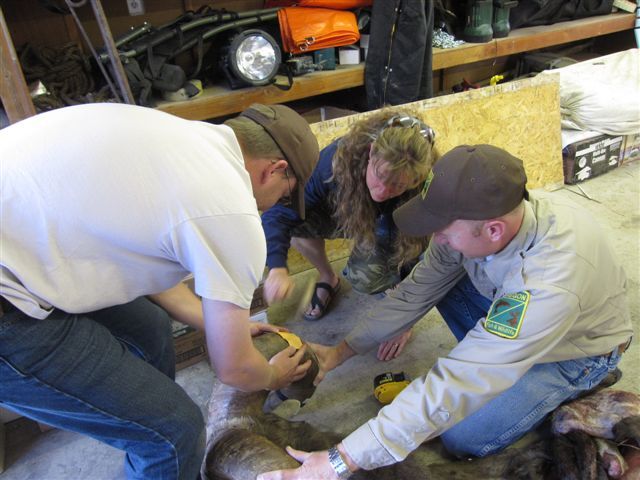 On the floor of the Baker City ODFW office, biologists help Jenni Thornton pound the plug into the back of her ram’s horn. With a length of almost 40 inches, 16 inches at the bases, and 9¾ inches at the fourth measurement, the 8½-year-old ram proved to be the largest ever taken by a lady in Oregon.

On the floor of the Baker City ODFW office, biologists help Jenni Thornton pound the plug into the back of her ram’s horn.

HELLS CANYON — Six bighorn sheep stared down. All rams. They had been bedded when we hiked into sight, watching us the whole time. Now some stood, some fed, turning their heads from time to time, watching us watching them.

Rocky Mountain bighorns, lying in direct sunlight at the very top of a rock slide in the breaks of Hells Canyon. A high, fissured cliff protected the sheep from above and six pairs of eyes watched for danger’s approach from the sides or below.

Two of the rams dwarfed the rest. From their beds they could watch the other sheep and our camp for signs of danger.

But we were there to hunt black bear, and soon our attentions turned to the green slope opposite. We loaded our rifles and began the long climb around a cliff on our side of the canyon to achieve a better vantage from which to glass for bears. Each step was carefully taken. A loose stone might roll underfoot, a handhold could give way or a rattlesnake might be coiled beneath a ledge. We followed a sheep trail up and picked our way across rock slides, clutching at clumps of grass to keep balance on the treacherous slopes.

Up the canyon and high above camp now, we scanned the far hillside. More black rocks and lightning-charred stumps and green grass and flowers. Not a bear to be seen. We turned our attention to our own slope once more.

Two more rams were feeding less than 200 yards away. We were above them this time and they browsed along the hillside above a sheer drop of 200 feet. From this range we could see what they fed on, broad-leafed yellow flowers, bitterbrush and wild parsley. They were aware of us, stopping to watch for a moment, then dropping their heads to resume feeding. They moved toward us as they fed, then the biggest one, an almost full-curl ram in the prime of his life, scraped out a bed in the sun and lay down while the smaller, a half-curl ram, continued to feed.

It is a precarious existence. We camped on a rocky outcrop, our beds laid on an incline, and ended the three-day spring hunt without a bear.

By the time this column sees print, the state will have awarded spring bear hunts for the year. For many of us, a spring bear hunt in the Snake River Unit is as close as we will get to ever drawing a sheep tag. Enjoy those moments in the sun. Chances for a sheep tag run about 1 in 200.

A person can draw only one controlled bighorn ram tag in Oregon in a lifetime, but there is a new opportunity, at least in the John Day and Deschutes canyons, for a ewe hunt, which will not count against a hunter’s once-in-a-lifetime chance.

In Oregon, bighorn sheep and mountain goat hunts are awarded in June of each year to a few lucky hunters. It’s the luck of the draw, but it’s not always good luck.

Sometimes that coveted tag comes at the least opportune time, like when a hunter has put on 75 pounds. The tag is awarded on June 16 and the hunt starts Aug. 15. The “lucky” dude has to drop 75 pounds in two months to get in “sheep shape!”

The deadline to apply is May 15. Apply early. Get to the gym. Oh, right. Well, go hiking then, with a full backpack. A sheep hunt will be physically demanding. Maybe there will be a trophy at the end of it, maybe not. But the memories you bring back from the high country will be worth it.

Approximately 81 bighorn tags will be awarded in this year’s drawing. One of us is going to draw a sheep tag this year. You or me, or that 12-year-old from Portland.

Gary Lewis is the author of John Nosler Going Ballistic and Oregon Lake Maps and Fishing Guide and other titles. To contact Gary, visit www.garylewisoutdoors.com