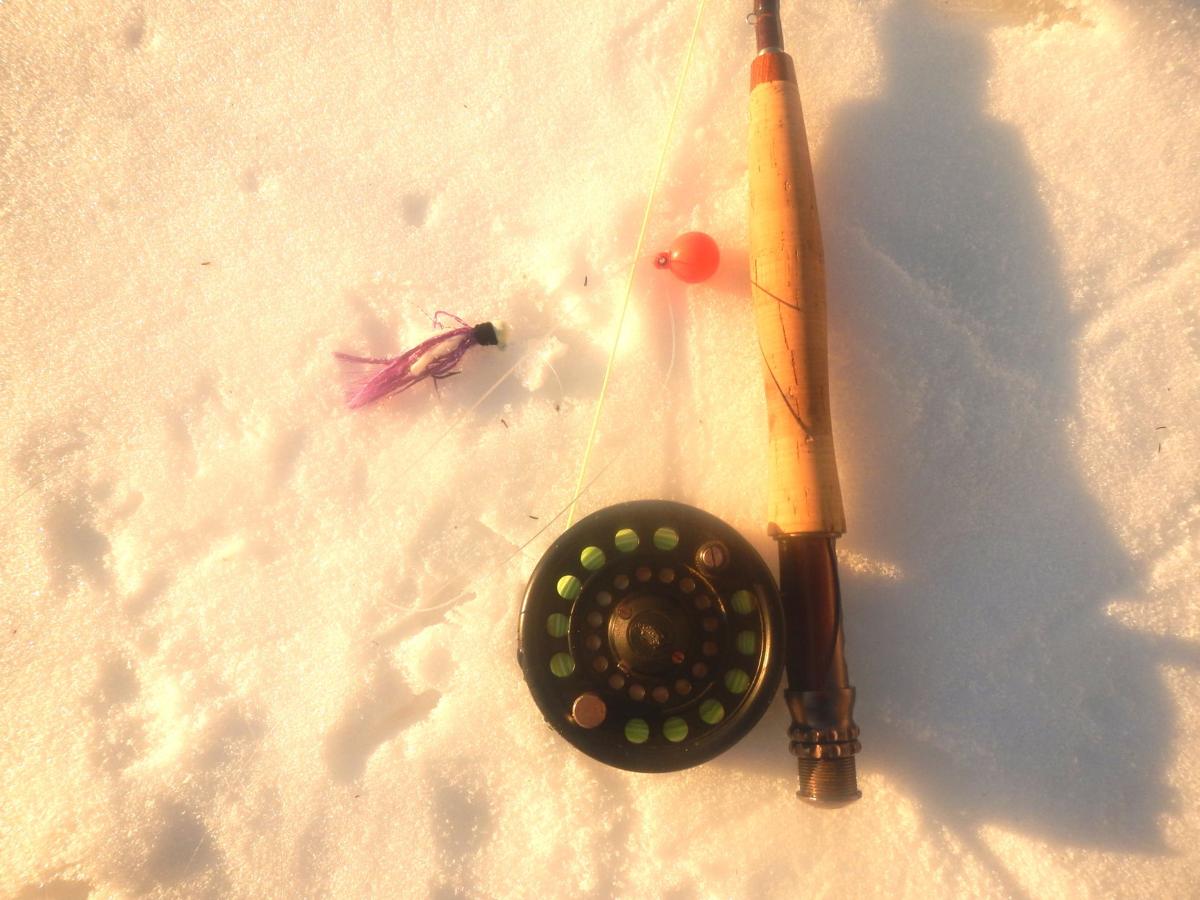 A small jig or nymph pattern floated below a thing-a-ma-bobber or strike indicator should be part of every fly caster’s arsenal. 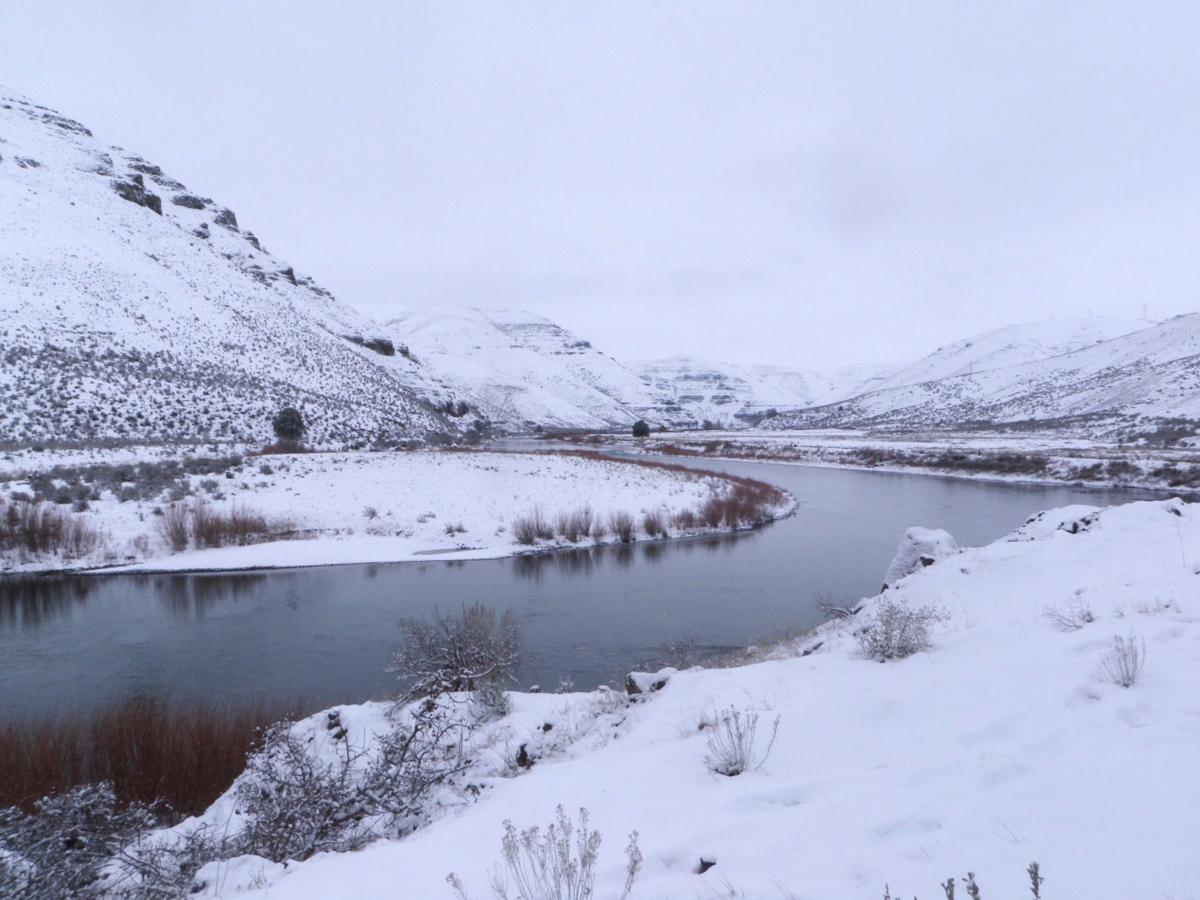 Frozen landscapes that often require a hike between good holding water are part of the challenge and the beauty of chasing steelhead on the John Day River. 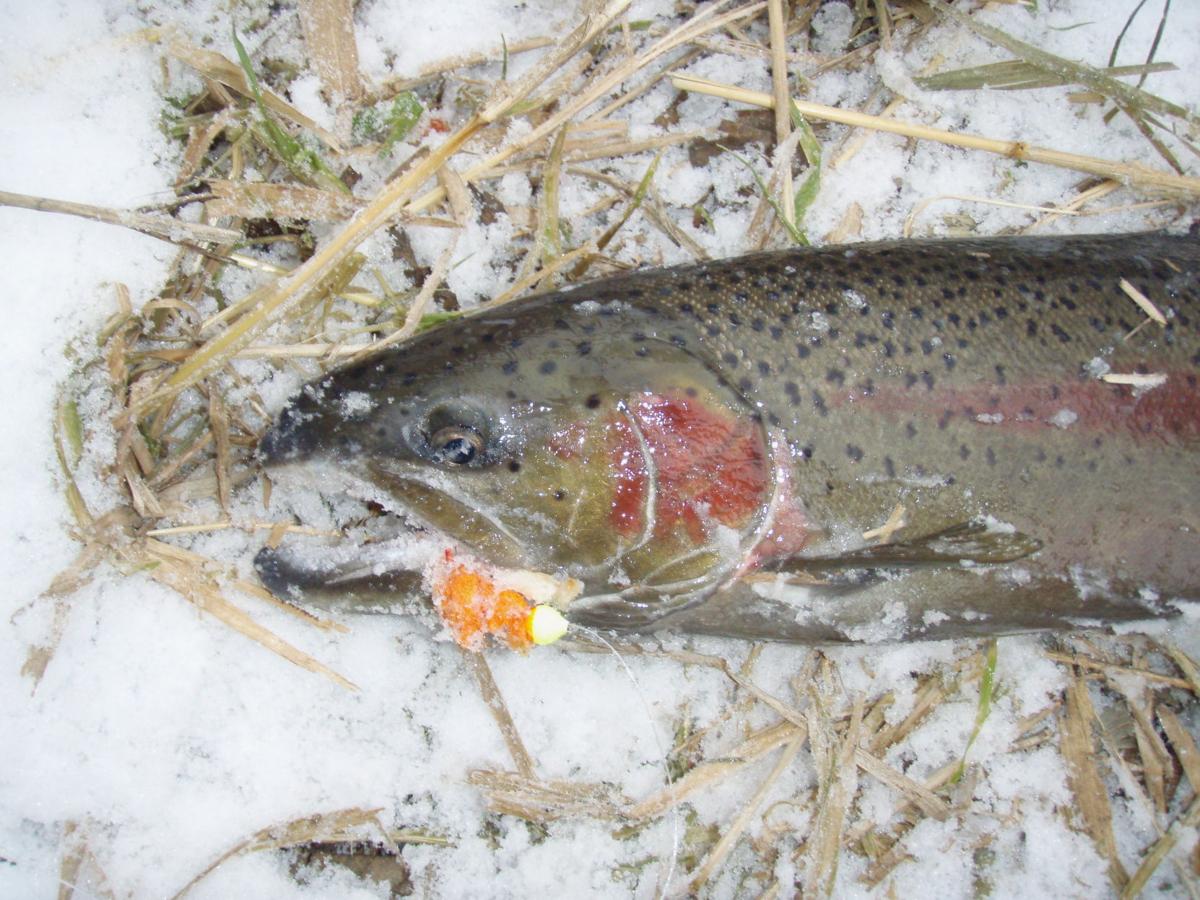 A corkie sweetened with roe led to landing this steelhead when a foot of snow had settled on the ground.

A small jig or nymph pattern floated below a thing-a-ma-bobber or strike indicator should be part of every fly caster’s arsenal.

Frozen landscapes that often require a hike between good holding water are part of the challenge and the beauty of chasing steelhead on the John Day River.

A corkie sweetened with roe led to landing this steelhead when a foot of snow had settled on the ground.

A few years back, on the way to our cabin in the Blue Mountains, I stopped in Pendleton to gas up my truck. A foot of snow crusted roadside ditches and a bitter north wind chilled my bones. The young man who exited from the convenience store to prime the gas pump shoved both hands in his pockets, and gazed at dark storm clouds racing across the winter sky.

“Those steelhead sure fight hard,” he said.

“I’d be fishing for them if I didn’t have to haul a load of wood to our cabin,” I replied.

“I caught one last week,” he continued. “There was a guy fishing on the other side of the river, but he couldn’t get to where I was casting. I threw my nightcrawler behind this big rock and ‘wham!’ It was wild though so I had to release it.”

“At least you got to go fishing,” I replied. “Beats laying on the couch watching Netflix.”

The good news for area anglers wanting to get off the couch and away from big screen TV is several local streams remain open for steelhead over the holiday period. All that’s needed is a sustained rainstorm or snowmelt event to raise flows and bring more fish in from the Columbia and Snake rivers.

The bad news is summer-run steelhead runs have been on a downward trend over the past several years. As an example, the number of steelhead counted at Three Mile Dam on the lower Umatilla River declined from just over 6,000 adults during the 2014-15 season to less than a thousand fish for 2018-19. Of this total, approximately 30% were hatchery origin.

Radio-tracking studies indicate a substantial number of steelhead stage in the lower 30 miles of the Umatilla River before migrating upstream to spawn in early spring. Angling success generally increases when the river drops and clears following a freshet. Optimal flows range from 300 to 800 cubic feet per second (CFS) as measured at Three Mile Dam.

Two hours or so down the road from Pendleton gets you to one of the largest runs of wild steelhead in the region. The 280-mile-long John Day is also open through the end of the year for a daily harvest of one hatchery steelhead. Similar to most area rivers, all wild steelhead must be released.

In 2008, the Western Rivers Conservancy (WRC) purchased Murtha Ranch, now Cottonwood Canyon State Park, and 16 miles of property along both banks of the river. WRC expanded their assets in 2009 to include one on the north end of the park and two adjacent ranch properties along Thirty Mile Creek, an important steelhead spawning tributary. Collectively, these acquisitions expand angler access and help ensure the health of wild steelhead populations in the John Day River.

The Wallowa River, located 80 miles east of Pendleton, is also open for steelhead angling in December. According to Grant Richie, owner of the Minam Store (minamstore.com), steelhead first began to show in October. Richey has largely closed up shop for the winter and doesn’t offer guided floats on the Wallowa again until March. The 10-mile section of the Wallowa River running along Highway 82 upstream of Minam has multiple pullouts that provide access to a series of long runs. Because trout fishing is open year-round, catches of steelhead-size rainbows are also possible. Check with the Joseph Fly Shoppe (josephflyshoppe.com) for additional information on river conditions and angling opportunity.

When water temperatures plummet, steelies hunker down and seek cover in the form of boulders, root wads, and steep banks with overhanging alder. Work each promising drift slowly and carefully by changing your angle of cast, size of lure and position relative to target.

Winter-time steelhead fishing is not for the faint of heart. Knocking chunks of ice from your rod guides with frozen fingers is part of the experience. Shoreline ice can be a problem during extended cold spells, as are dangerous road conditions. However, there’s something special about a day when shaggy snowflakes fall from the sky, song sparrows twitter from the shelter of brush willow, and a steelhead pulls strong on the end of your line.

Dennis Dauble is a retired fishery scientist, outdoor writer, presenter and educator who lives in Richland, Wash. For more stories about fish and fishing in area waters, see DennisDaubleBooks.com.