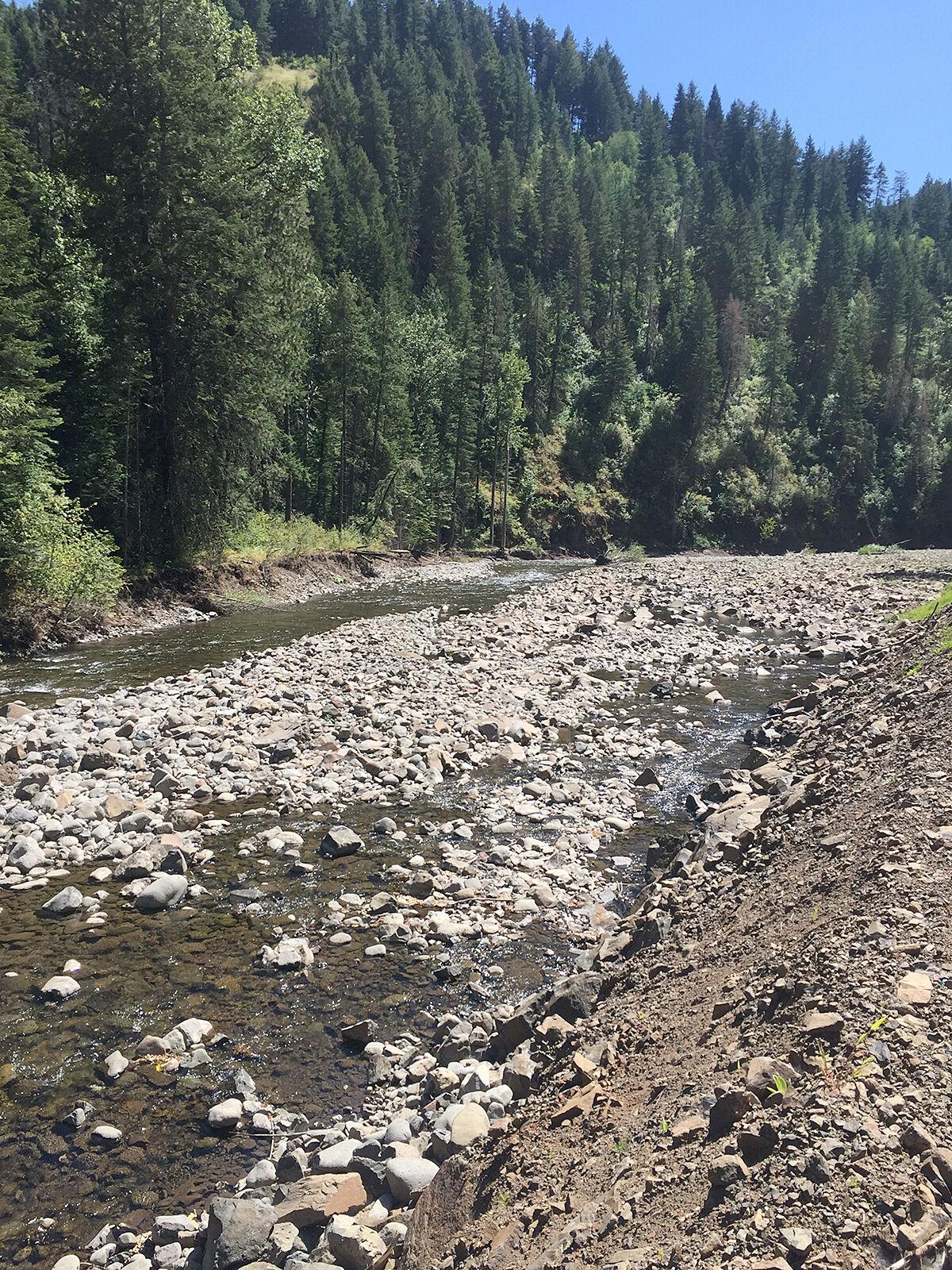 The February flood scattered cobble, boulder, and debris along several long, straight stretches of river that have turned shallow during summer low flow. 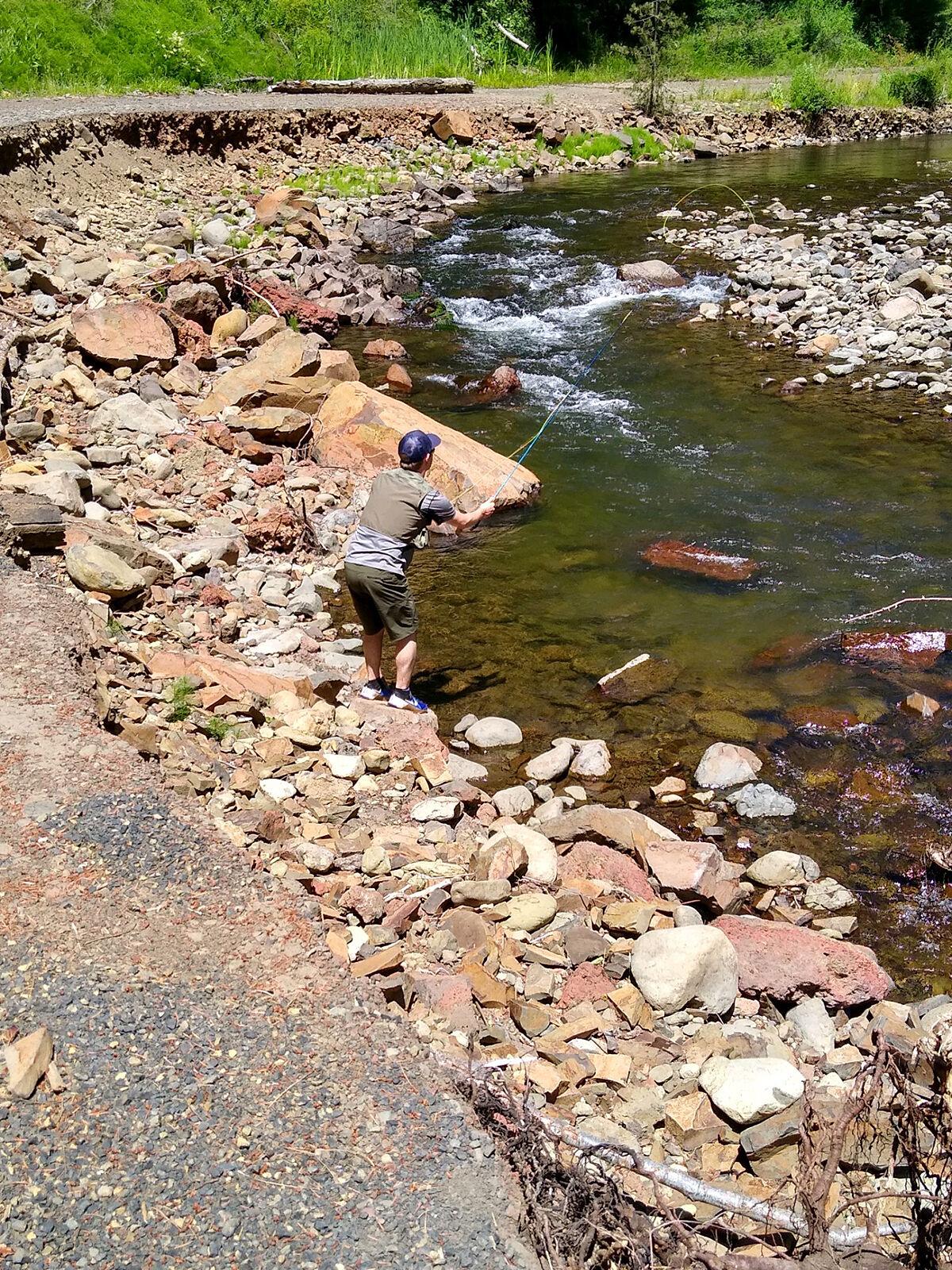 Blake Morris crouches low to cast into the tongue of a promising pool near a washed-out section of road downstream of the Umatilla Forks campground. 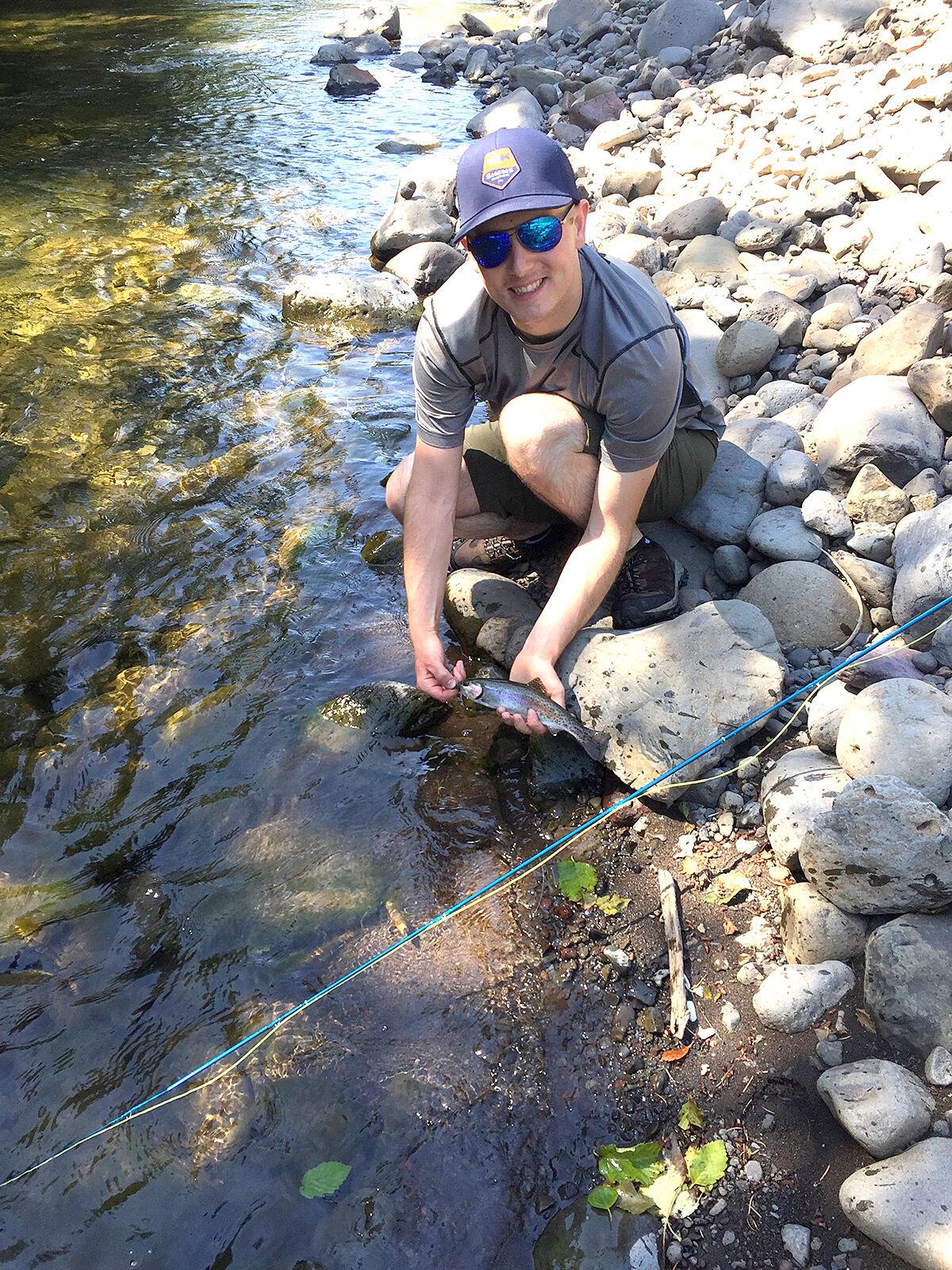 Blake Morris shows off an 11-inch rainbow trout caught in a deep plunge pool formed by the February 2020 flood.

The February flood scattered cobble, boulder, and debris along several long, straight stretches of river that have turned shallow during summer low flow.

Blake Morris crouches low to cast into the tongue of a promising pool near a washed-out section of road downstream of the Umatilla Forks campground.

Blake Morris shows off an 11-inch rainbow trout caught in a deep plunge pool formed by the February 2020 flood.

For much of my life, the upper Umatilla River has served as a place of refuge. As a child, my parents drove our 1955 Mercury station wagon from Weston to the heart of the Umatilla Indian Reservation, where we surfed rapids in cheap air mattresses and caught 2-foot-long suckers with our hands.

Boy Scout trips took me upstream to campsites near Thomas Creek for early season hatchery trout. Years later, my wife Nancy and I transported our two young children from Eastern Washington sagebrush country to camp at “The Forks” each fall when cottonwood leaves turned gold.

In 2005, we purchased a 70-year-old log cabin near the Bar M Ranch. A long list of fix-ups followed, but I always found time to cast a fly. My sporting lifestyle took a turn for the worse this past February when unruly flows ravaged the landscape and deposited 4 inches of mud inside our cabin and others.

Opening day of trout season was spent putting up new sheetrock and replacing a front porch that got swept away in the flood. I missed a June mayfly hatch while fixing buckled floors. My first sojourn to fish the upper Umatilla River occurred in July, when my nephew replaced flood-damaged cabinets in the cabin’s vintage kitchen. “All good things take time,” as my mother used to say.

As an aquatic ecologist, I understand how floods benefit streams. High flow enhances movement of nutrients from the terrestrial landscape, creates living space for aquatic insects by removing fine sediment from river cobble, and restores function to gravel beds used by salmon, steelhead, and trout for spawning.

However, the trout angler in me feels remorse when I survey favorite stretches of the Umatilla River. Dump truck loads of gravel are left high and dry. Wide, shallow riffles have replaced gentle meanders. Shorelines are bare of cooling willow and alder. Deep plunge pools exist only where the river’s course meets immovable bedrock cliffs. Did any trout survive? I wonder.

My nephew’s son, Blake, is an eager companion for an afternoon on the river. After sifting through his box of flies, he selects a No. 10 Renegade. Renegades are the perfect pattern for Blue Mountain streams. They can be fished dry or allowed to sink below the surface like a drowned insect. Most self-respecting rainbow trout go for them on the first cast.

I start with a cream-colored PMD that also rarely fails to produce a strike. We high-step through a snarl of waist-high snowberry, blackberry vine, and downed timber downstream of where a washout left the South and North Fork arms inaccessible except to ATVs and hikers. It’s rare a day of fishing where I don’t end up with scratched ankles and bruised kneecaps.

After reaching the river, I point out a promising pool, find a smooth boulder to rest my backside, and coach Blake to focus on short, precise offerings rather than imitate a long cast contest seen on YouTube. “Work the edges first,” I say. “Save the best part of the hole for last.”

Blake crouches low and casts to the heart of the pool, unable to corral his youthful enthusiasm. The ever-present smile on his face grows at the moment he hooks a small trout where the current tongue swirls under a giant fir log torn loose by the February flood. When he brings the fish splashing to the shallows for release, I explain how salmon and trout can be identified by the size, shape, and location of dark parr marks displayed alongside their silvery flank. Blake nods his head, more interested in catching another fish than a lesson in ichthyology.

We probe pocket water, riffle runs, and deep slots where current crests along a riprap bank, switching between Yellow Caddis, Stimulator, and Parachute Adams patterns. Most fish we fool are small rainbow trout 5-7 inches in length, although Blake’s patience is rewarded with one 11-inch rainbow. Smaller-size juvenile spring Chinook salmon are identified by a flash of gold shown when they try to pull a fly down.

Several tiny steelhead fry from this year’s post-flood spawn scatter in the shallows. On a previous trip, an angler shared with Blake the landing of a 27-inch bull trout. Although overall numbers of fish appear low, enough species survived the flood to fill an angler’s dance card.

In one swift extreme flow event, Mother Nature erased features familiar to me over a lifetime of fishing. I wonder, how long before streamside willow and alder sprout to shade bare shorelines, cool the river, and nourish aquatic life? How many years before the river regroups to form more pools for fish and the creatures they depend on for food?

I can’t help notice that Blake lingers at each promising location longer than I do. For me, there is too much to explore to dawdle over a second chance at a small trout. It’s a whole new river with miles and miles of water to learn all over again.