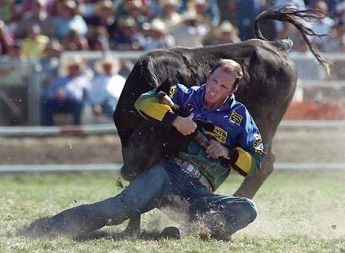 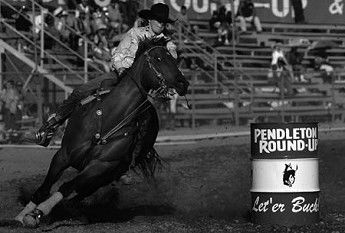 Linzie Walker of Conway, Wash., turns the corner while competing on barrel racing Friday at the Pendleton Round-Up.<br><i>Staff photo by E.J. Harris</i>

Linzie Walker of Conway, Wash., turns the corner while competing on barrel racing Friday at the Pendleton Round-Up.<br><i>Staff photo by E.J. Harris</i>

PENDLETON - Josh Peek turned in the low number in two timed events Friday, first impressing the swelling crowd on hand for day three of the Round-Up by roping his calf in 12.2 seconds and then getting the job done later in the day when he flipped his steer in just 5.6 seconds.

"It was just awesome," Peek said after his calf roping run. "My horse worked really good.?I'm just very, very happy and thank the Lord because I need to get back into the short round."

Peek, ranked No. 4 in the PRCA's world standings, is in ninth place going into the short round. Scott Kormos leads the way with 19.9 over two rides, with Matt Shiozawa nipping at his heels with 21.1 seconds over two.

"I just gotta come back and tie another one down," Peek said. "Short rounds always fall apart in this deal.?Guys who can go out there and make a smooth run can win some money."

To get into the short round in bulldogging, cowboys had to do more than just put together a qualified ride. Going into the day Todd?Suhn was leading the way with a 10.2 second aggregate for two rides, and four others were within three seconds of him.

Peek might have had the best time of the day in this very physical event, but it was Ted Gollaher that benefitted the most from a 7.2 seconds attempt. With his slack time of 5.1, Gollaher goes into the short round in third place, behind Suhn and Dane Hanna.

"I was just excited to be here and have better luck than?I have in the past," Gollaher said. "It's a heck of a rodeo. Coming back third makes it extremely special."

Gollaher said he has no special strategy heading into the short round.

"I just have to get out of the barrier and roll another one over," he said, "and see what happens."

Team roping proved challenging again, with only four teams turning in a qualified ride Friday. Jake Rodriguez and Evan Arnold had the best time of the day, a blazing 6.1 run where nearly everything went right. Still, it wasn't enough to make the top 12.

Matt Sherwood and Rhen?Richard are in first place heading into the short round at 12.7 seconds through two rides. Matt Funk and Paul?Eaves bring up the rear with a 16.9 aggregate.

The steers continued to torture cowboys, preventing all but three competitors from scoring a qualified time. Dave Inman rode a 13.9, but it wasn't good enough to get him into the finals. C.A. Lauer goes into the short round with the lead, a 25.3 aggregate.

Steer roping is the only event where less than 12 competitors made two qualified rides. Five men will have a chance to steal one tomorrow and walk away with the win, despite recording only one qualified time. Rocky Patterson, Landon McClaugherty, Chance Kelton, Vin Fisher Jr., and Jim Folk are the lucky cowboys who get a rare second chance.

Linzie Walker rode a blazing 28.32 in barrel racing to claim first place overall heading into the short round. Marvel Murphy was right behind at 28.83, while Jackie Rhoden claimed a 28.95 time. All three women will compete in the finals tomorrow.

"The ground was really hard today. Running into the second Dude felt it. He really stumbled out of the second," said Walker, who is seeking her fourth straight win at the Round-Up. "Coming out of my second, I was like, 'oh man, we lost a lot of time on that.'"

But Walker and her horse, Azure Dude, who she won the past three Round-Ups with, made up the time on the final barrel and screamed across the grass to secure another shot at glory.

The Round-Up concludes tomorrow with the short round in all eight events beginning at 1:15 p.m.