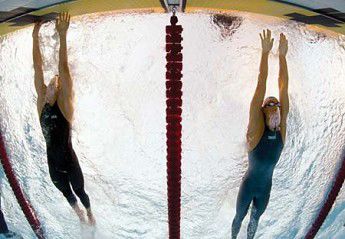 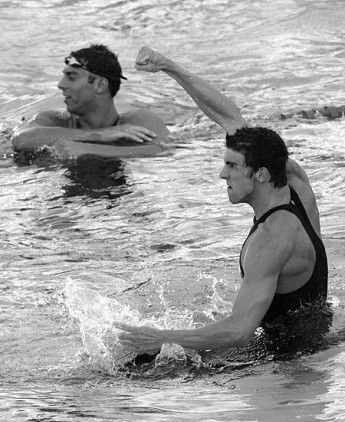 ROME - He defiantly spit out a mouthful of a water, climbed atop the lane rope, pumped his fists furiously and tugged on that supposedly inferior swimsuit.

The message was clear: Don't mess with Michael Phelps.

Milorad Cavic tried to get in his head and wound up looking at his back, losing again to the guy who beat him at the Beijing Olympics.

This time, there was no doubt about it.

"There are always things that fire me up and motivate me," Phelps said Saturday, after becoming the first swimmer to break 50 seconds in the 100-meter butterfly. "That's just how I tick."

He stayed close over the outward lap and rallied on the return to beat Cavic with a stunning time of 49.82 at the world swimming championships. Cavic also broke 50 seconds, but 49.95 only got him a silver - and plenty of words to eat.

He wasn't nearly as close as last year's Beijing Olympics, when Phelps famously won by one-hundredth of a second on the way to eight gold medals, over Cavic's objections that he actually touched first.

"That satisfied me a little bit," Phelps quipped with that crooked grin of his. "I set it up perfectly."

His reaction was nearly as memorable. Phelps hopped on the rope that had separated him from Cavic - eyes searing, jaw jutting out. He pulled at both sides of his skintight LZR Racer swimsuit, letting his rival know that he heard about his offer to get Phelps one of those faster polyurethane suits so he wouldn't have any excuses if he lost in a Speedo.

Phelps did just fine with his own attire.

The two rivals finally shook hands, but that was about it.

Nothing more needed to be said.

"He congratulated me and kind of smiled a bit, but I have a feeling that our battle is going to go back and forth for a while," Phelps said.

Cavic did say one thing to Phelps: "You're the man."

"He just looked at me and smiled," Cavic said. "He knows it."

In one of the most memorable events at Beijing, Phelps pulled out an improbable victory on his final half-stroke to beat Cavic by the narrowest possible margin. Without that win, Phelps would not have broken Mark Spitz's record for most gold medals in a single games.

Cavic has stewed over the loss ever since, believing he touched first but didn't put as much pressure on the touchpad as Phelps, who ad-libbed an extra lunge and crashed into the wall much harder. Even though all electronic and photographic evidence shows Phelps won, Cavic repeated his claims when he got to Rome.

He then tried to play some mind games with Phelps, saying it was the American's own fault for sticking with a Speedo suit that isn't as fast as the fully rubberized models such as the Arena X-Glide, which Cavic wears.

The Serbian offered to get Phelps an X-Glide "within the hour," or buy him a similar suit out of his own pocket. Cavic said he would really prefer to race Phelps wearing nothing but briefs, so everyone would know who the best man is without any help from the suits.

Phelps said he would do his talking in the pool.

"He loves the big races, loves the energy," Bowman said. "He sort of thrives on that, while some other swimmers don't."

Phelps set his second world record of the fastest meet in history and got back the mark Cavic snatched away a night earlier with a time of 51.01 in the semifinals.

Phelps also won his fourth gold medal of the championships, to go along with that silver he grudgingly accepted after losing to Germany's Paul Biedermann in the 200 free. Phelps has one event left - the 400 medley relay Sunday night, assuming the U.S. doesn't mess up in the morning prelims. The Americans will be a heavy favorite in that one, as always.

Three other world records were set Saturday, bringing the total to 39 with one day left at the final meet for high-tech bodysuits that have everything but a motor attached to them.

Kirsty Coventry of Zimbabwe took down her own mark in the 200 backstroke, winning in 2 minutes, 4.81 seconds. Russia's Anastasia Zueva also went under Coventry's old mark of 2:05.24, but 2:04.94 was only good enough for the silver. American Elizabeth Beisel claimed bronze.

China claimed the record in the women's 400-meter medley relay. Li Zhesi finished it off in 3:52.19 to beat the mark set by Australia (3:52.69) at the Beijing Olympics. The Aussies also went under the old mark, settling for silver in 3:52.58. Germany took the bronze.

In a semifinal heat of a non-Olympic event, Britain's Liam Tancock set a world record of 24.08 in the 50 backstroke, eclipsing the mark of 24.33 held by American Randall Bal. Junya Koga of Japan also went under the previous record time to win the second heat at 24.29. The final is Sunday night.