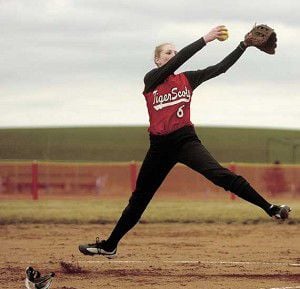 TigerScot Haley Freske pitches during the game held against the Pioneers on Saturday afternoon in Athena. <BR><I>Staff Photo by Brenna E. Chapman</i> 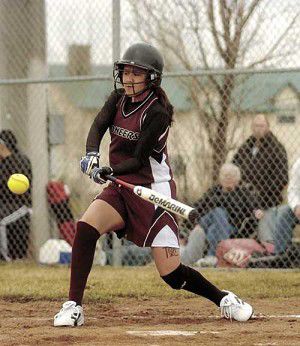 Pioneers Belen Betancourt swings at a pitch during the game held on Saturday afternoon in Athena. <BR><I>Staff Photo by Brenna E. Chapman</i>

TigerScot Haley Freske pitches during the game held against the Pioneers on Saturday afternoon in Athena. <BR><I>Staff Photo by Brenna E. Chapman</i>

Pioneers Belen Betancourt swings at a pitch during the game held on Saturday afternoon in Athena. <BR><I>Staff Photo by Brenna E. Chapman</i>

ATHENA - The Weston-McEwen softball team trailed 6-3 going into the bottom of the sixth inning in a non-league game against McLoughlin Saturday but rallied for six runs to eventually win 9-6.

With a squad made up mostly of underclassmen, coach Jeff Griggs said he wasn't sure what to expect in the last two innings.

"You don't coach that, you encourage it but you don't know how the girls are going to respond," he said. "I was really pleased and happy for them to do that, to have that comeback experience and know they can do that. We are a pretty young group and I think the kids showed a lot of resolve."

Haley Freske picked up her second win of the season for the 'Scots (2-1), striking out nine with one walk and three earned runs.

Addie Terjeson was 3 for 4 with three runs and led off the sixth with her second double of the game. Rilei Hill got the scoring started in that inning with a bases-loaded double.

SHERMAN COUNTY 4, WESTON-MCEWEN 3 - In Athena, Owen Hegdal won his singles match 6-0 and Cole Albee got in a pair of wins but the TigerScots were edged by the Huskies in Friday tennis action.

WESTON-MCEWEN 3, SHERMAN COUNTY 2 - In Athena, the TigerScots split their singles matches but took the nonconference meeting when Shyanne Albee and Melissa Husky beat Miranda Hughes and Eden Minnick in a tiebreaker 7-6 (7-5) Friday in the doubles match of the day.

Albee won the No. 1 singles match 6-4 over Cat Crowder and Husky defeated Jessica Holliday 6-3 in the No. 3 single match.

Photos: Packers' fans tailgate but the day ends in disappointment