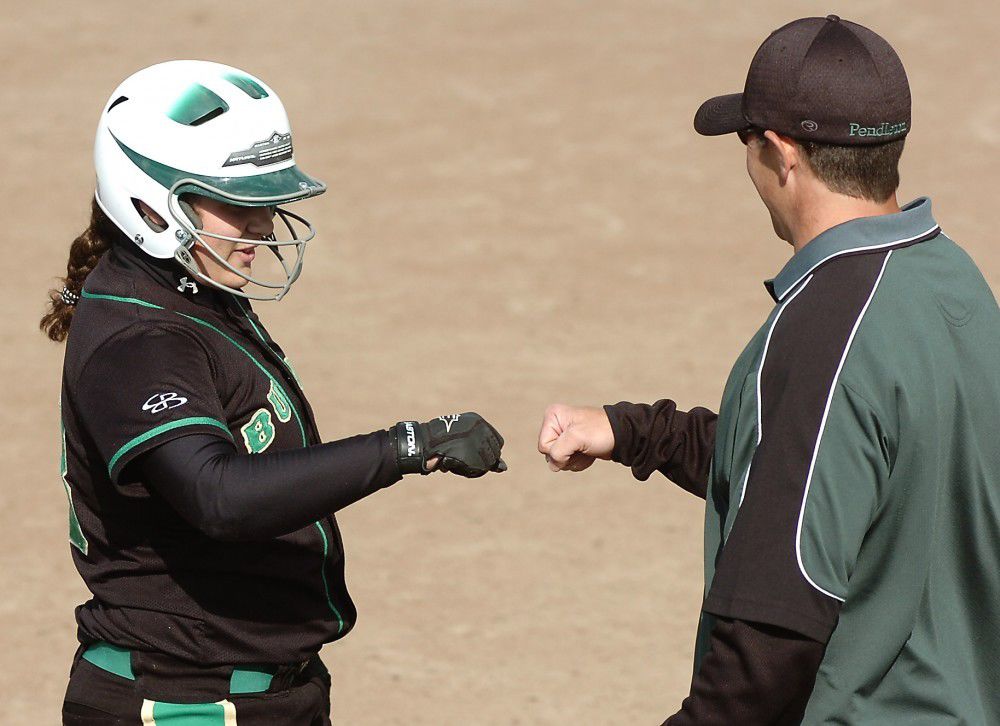 <p>Pendleton coach Tim Cary gives a fist bump to Tiah Grass after she hit an RBI triple in the Bucks' 7-0 win against Churchill on Wednesday in Pendleton.</p> 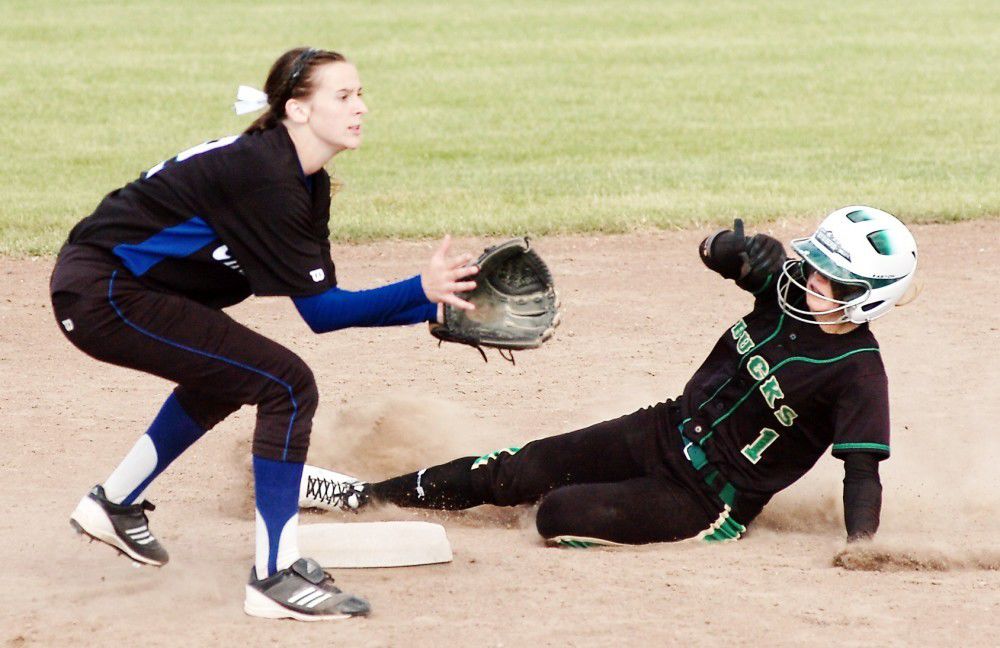 <p>Pendleton's Shea Lindsey steals second base as Churchill's Taylor Terry waits for the ball in the Bucks' 7-0 win against the Lancers on Wednesday, May 24, 2012, in Pendleton.</p> 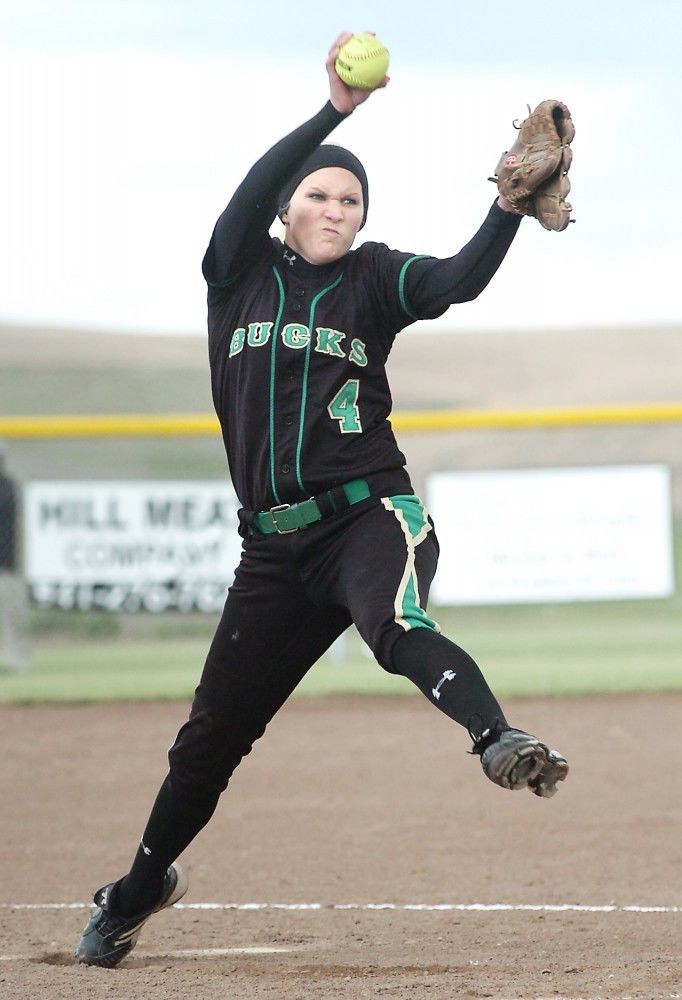 <p>Pendleton's Kristen Crawford throws from the pitching circle in the Bucks' 7-0 win against Churchill on Wednesday in Pendleton.</p>

<p>Pendleton coach Tim Cary gives a fist bump to Tiah Grass after she hit an RBI triple in the Bucks' 7-0 win against Churchill on Wednesday in Pendleton.</p>

<p>Pendleton's Shea Lindsey steals second base as Churchill's Taylor Terry waits for the ball in the Bucks' 7-0 win against the Lancers on Wednesday, May 24, 2012, in Pendleton.</p>

<p>Pendleton's Kristen Crawford throws from the pitching circle in the Bucks' 7-0 win against Churchill on Wednesday in Pendleton.</p>

PENDLETON  Kristen Crawford didnt have her best swing-and-miss stuff while pitching in the first round of the Class 5A state softball playoffs Wednesday, but the Pendleton senior dominated another way. Crawford threw to contact and kept her defense on its toes as the Bucks advanced past Churchill, 7-0.

Crawford might as well have invested in a summer home along the bottom of the strike zone for the amount of time the pitcher spent there. Her sinking pitches caused 14 ground outs over seven innings versus just three in the air.

That kept the game zipping along and sustained the energy  in the Pendleton defenders, third baseman Darian Lindsey said.

We know that Kristens a good enough pitcher to either get them herself or ground them out usually so you just stay on your toes, said Lindsey, who smothered four ground outs at the hot corner. I?like it because I always know I have to be ready and cant take plays off. It doesn't get boring.

Crawford struck out three Lancers and walked none.

The top-seeded Bucks (20-7) slid into the quarterfinals with the win and will host another home game on Friday, this time against Sandy.

The Pioneers out of Sandy (17-6) knocked off Mountain View 4-0 on Wednesday at home to advance to the quarters and are the No. 4 seed in the Bucks half of the bracket. Sandy took second place this season in the Northwest Oregon Conference and has won seven of its last eight games.

After five close games to wrap up the league season, the Bucks have now broken out the bats for two straight blowouts. The team is starting to feel like the states top squad and that confidence shows on the field, Crawford said.

I?think it makes us all feel better knowing we can start getting a lot of runs, even if these arent the top teams, she said. We need to be able to swing the bat no matter what team it is.

Pendleton hit the scoreboard early in this game, pushing two runs across in the bottom of the first inning. Shea Lindsey set the pace for Pendleton by getting on base four times  three singles and a walk  before causing havoc on the base paths. Lindsey stole three bases and took another on defensive indifference while scoring three runs.

Were not getting too confident but were coming out more ready to play than we used to, she said. We used to come out slow and now were feeling on top of it early in the game.

Lindsey said shes worked on her timing with pitches at the plate recently to help her jump start Pendleton  rallies by getting on base more often. Timing is crucial for slap hitters like the senior left-hander, who starts toward first base before the pitch is even within hitting distance while batting.

Her desire to get on base nearly got the best of her in the third inning when she almost moved face-first into an inside pitch from Churchills Taylor Potter. Lindsey was able to duck at the last second as the ball glanced off her upright bat for a foul ball.

She would hit an infield single later in the at-bat.

Kasidee Lemberger also collected three hits in the game with a pair of RBIs. Evangelina Olivera doubled in a pair of runs while Tiah Grass smacked an RBI triple as part of a Buckaroos three-run fourth inning.

Churchill (10-16)  which upset Bend 16-2 on the road in the play-in round last week  knew it faced a serious mountain to climb in Pendleton on Wednesday, coach Eric Leyba said.

We had nothing to lose being whatever it was, the 16th seed in this tournament, Leyba said. When you get on the field and face a good team like this youve got to be able to produce to keep moving.