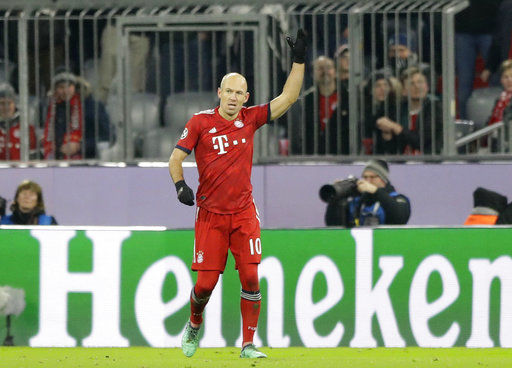 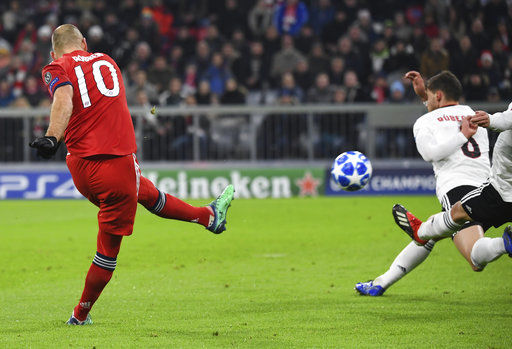 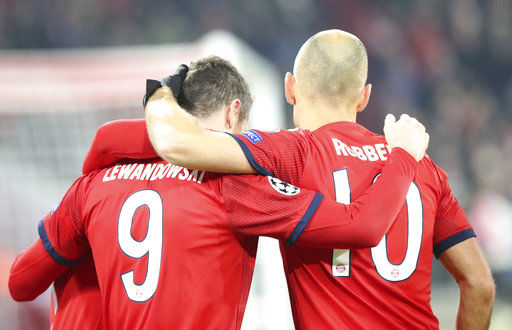 MUNICH (AP)  Bayern Munich secured its place in the knockout stage of the Champions League with a 5-1 rout of Benfica on Tuesday, easing the pressure on coach Niko Kovac.

Arjen Robben and Robert Lewandowski both scored twice for the home side, ensuring Bayern qualified for the round of 16 with a game to spare in Group E.

Ajax earlier advanced from the group with a 2-0 win at AEK Athens. Bayern leads the group with 13 points, two ahead of Ajax, which cannot be overtaken by third-place Benfica. Ajax hosts Bayern to decide the group winner on Dec. 12.

Kovac was in danger of losing his job following Bayern's 3-3 draw at home to relegation-threatened Fortuna Duesseldorf on Saturday. While Bayern is nine points adrift in the Bundesliga, it is faring better in the Champions League, despite a 1-1 draw with Ajax in Munich on Oct. 2.

"I was really happy, also for him," Robben said in support of Kovac. "He belongs among us."

Robben got the hosts off to a great start against Benfica when he beat three defenders and eluded another before letting fly inside the far corner with his left boot in the 13th minute.

The Dutch winger grabbed his second on the half-hour mark, again with his left foot, six minutes before Joshua Kimmich sent in a corner for Lewandowski to get off the mark.

Halftime substitute Gedson made an immediate impact after coming on when he dinked the ball over Bayern goalkeeper Manuel Neuer, but Lewandowski answered five minutes later with a goal almost identical to his first: a header to Kimmich's corner.

Franck Ribery, who had been fortune to escape a second yellow card for a flailing arm into Andre Almeida's face, wrapped up the win in the 76th.

"They were important for us, for the team," Robben said of his goals. "I'm not only playing for myself. It was important after the bitter disappointment of Saturday to stand up again."