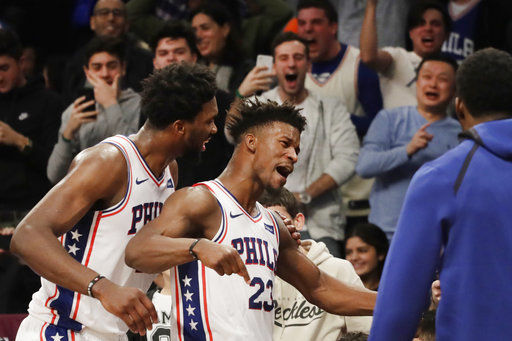 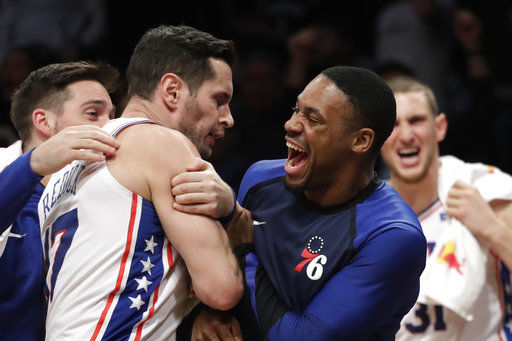 Philadelphia 76ers' JJ Redick (17) is congratulated by teammate Demetrius Jackson after scoring in the fourth quarter of an NBA basketball game against the Brooklyn Nets, Sunday, Nov. 25, 2018, in New York. The 76ers won 127-125. (AP Photo/Mark Lennihan) 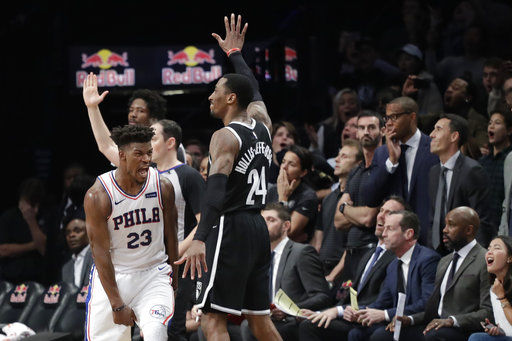 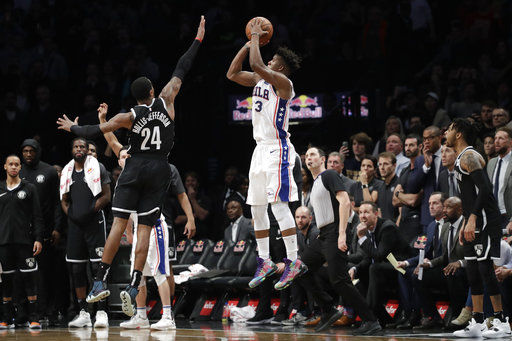 Philadelphia 76ers' JJ Redick (17) is congratulated by teammate Demetrius Jackson after scoring in the fourth quarter of an NBA basketball game against the Brooklyn Nets, Sunday, Nov. 25, 2018, in New York. The 76ers won 127-125. (AP Photo/Mark Lennihan)

NEW YORK (AP)  Jimmy Butler made a 3-pointer with 2.3 seconds remaining to give the Philadelphia 76ers a 127-125 victory over the Brooklyn Nets on Sunday.

Butler's shot from the right wing, similar to the one that beat Charlotte in overtime on Nov. 17, capped Philadelphia's rally from 20 points down in a game the Nets led nearly all the way.

D'Angelo Russell had 38 points, his highest total with the Nets, and added eight assists and eight rebounds. Spencer Dinwiddie scored 31 points off the bench.

Ross scored 16 points as the Magic defeated the Lakers for the second time in eight days. Orlando won 130-117 at home on Nov. 17.

Aaron Gordon had 17 points and D.J. Augustin added 12 points and nine assists for the Magic.

LeBron James had 24 points and seven assists for the Lakers, who had won three straight games and six of their past seven. Kyle Kuzma scored 21 points and Brandon Ingram added 17.

Jonas Valanciunas had 17 points and 10 rebounds, and Pascal Siakam scored 21 points, two shy of his career high, as the Raptors improved their NBA-leading record to 17-4.

Dwyane Wade scored a season-high 35 points, the most ever by a Miami bench player. Josh Richardson scored 19 points and Bam Adebayo had 16 points and a career-high 21 rebounds, but the Heat lost for the seventh time in nine games.

Danilo Gallinari made the tiebreaking jumper with 47 seconds left and added 17 points for the Clippers.

Damian Lillard scored 30 points for Portland, which led by 13 at halftime but then had to play the second half without starting center Jusuf Nurkic because of a bruised shoulder.

DETROIT (AP)  Andre Drummond had 19 points and 16 rebounds, and Detroit pulled away in the fourth quarter to beat Phoenix.

Devin Booker scored 37 points for Phoenix, and Detroit had a hard time shaking free of the Suns until a 15-3 run in the fourth. Blake Griffin had 16 points and 11 assists for the Pistons, and Reggie Jackson had 19 points and eight assists.

Deandre Ayton had 25 points for 13 rebounds for the Suns.

Phoenix forward T.J. Warren was ejected in the second quarter after receiving two technical fouls following an offensive foul call that went against him.

Walker, the NBA's second-leading scorer, hit a jumper to put Charlotte up by one with 47.5 seconds remaining, but he committed a shot-clock turnover on the next possession and finished 7 for 23 from the field for 22 points.

Kent Bazemore scored 20 points and hit the go-ahead basket for Atlanta, taking an inbound pass and driving down the left side past Dwayne Bacon for a layup with 4.6 seconds to go.

Malik Monk tied a career high with 26 points, and Marvin Williams added a season-high 13 rebounds and chipped in 20 points for the Hornets.

Utah won handily despite playing without leading scorer Donovan Mitchell, who sat out with bruised ribs.

Four days after losing to the Kings in Salt Lake City, the Jazz bounced back behind a fast start from Rubio then pulled away for their eighth consecutive road win in Sacramento.