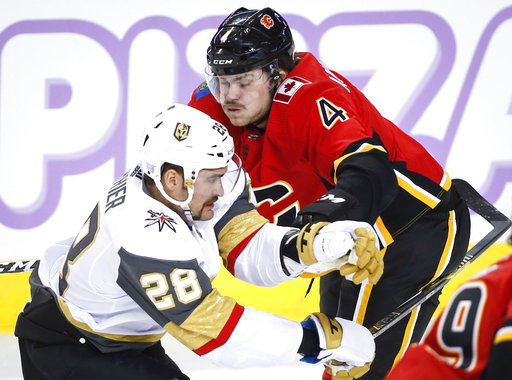 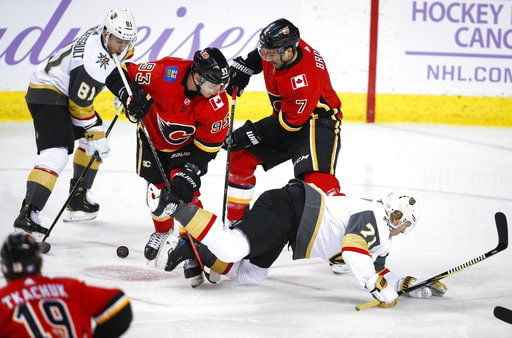 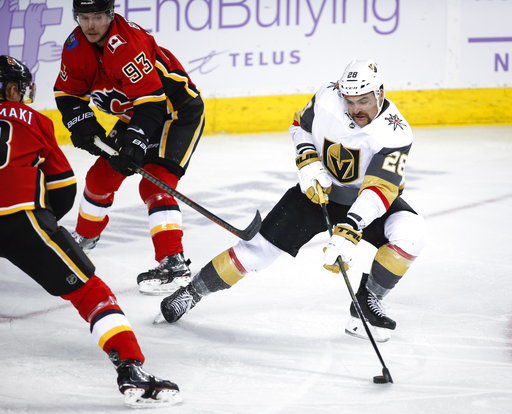 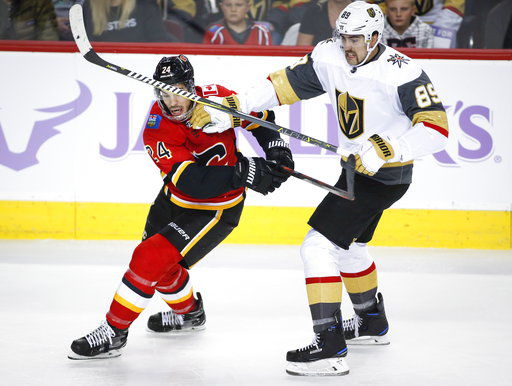 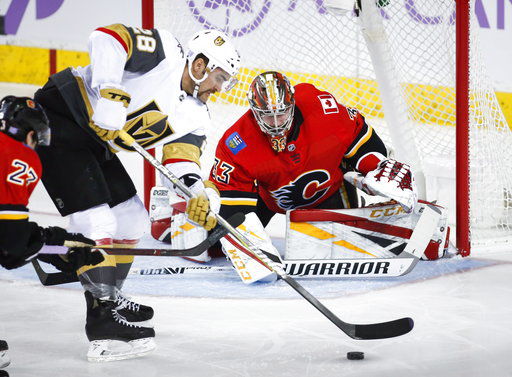 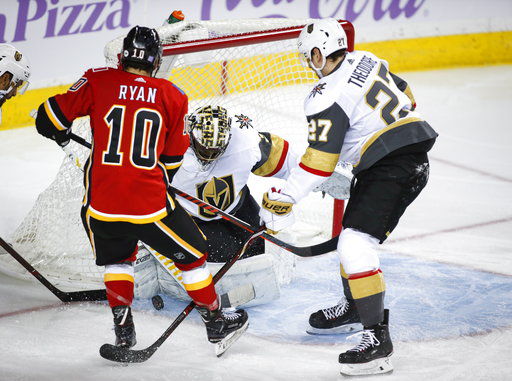 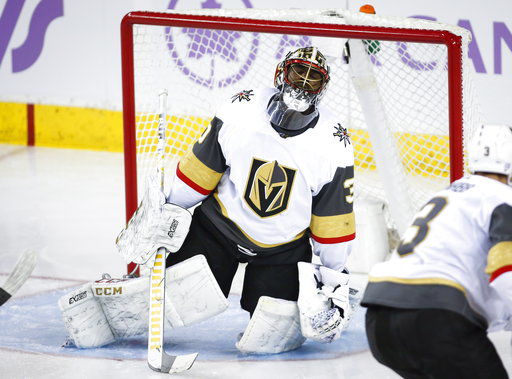 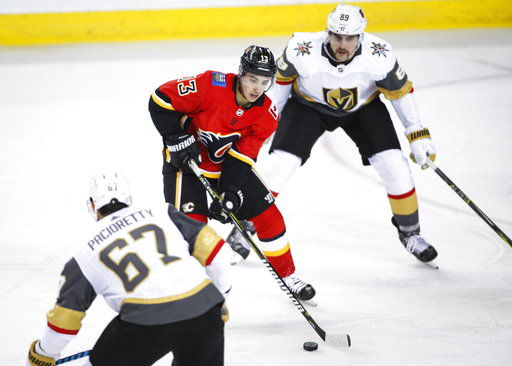 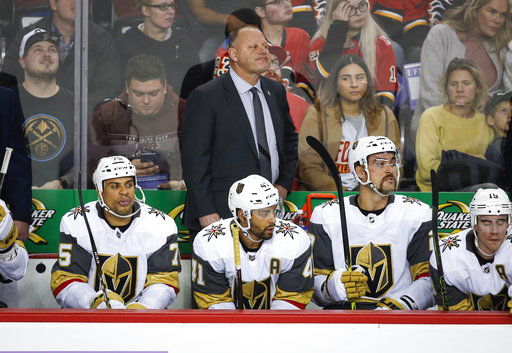 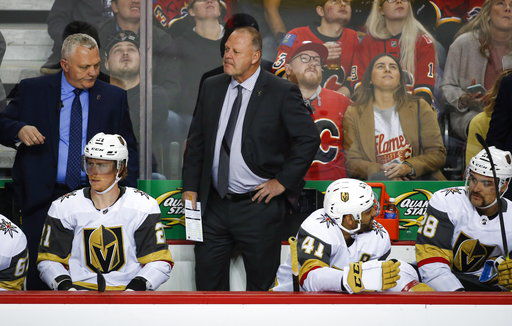 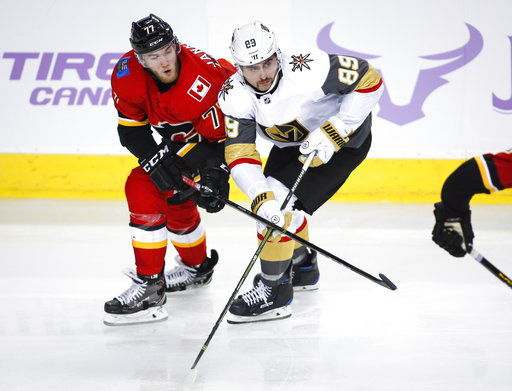 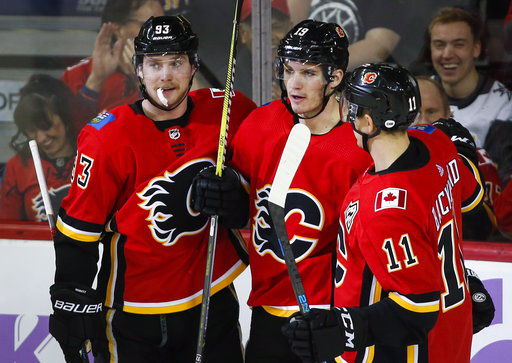 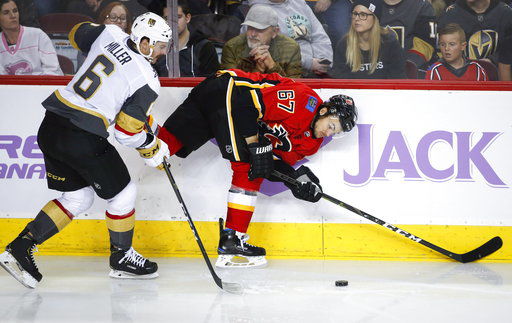 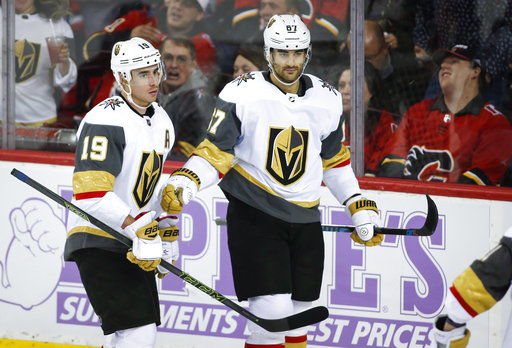 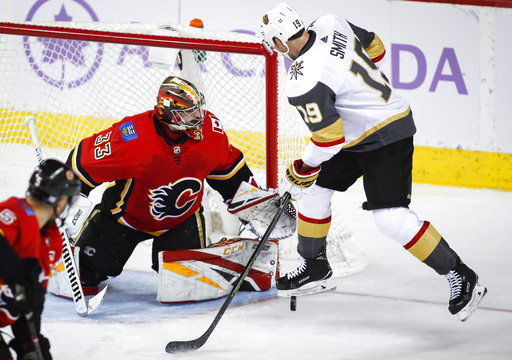 CALGARY, Alberta (AP)  Johnny Gaudreau matched a career-high with four points, all in the first period, and found a spot in the Calgary Flames' record book.

Gaudreau's goal and three assists, along with Matthew Tkachuk's two goals and two assists, helped the Flames take over top spot in the Pacific Division with a 7-2 rout of the Vegas Golden Knights on Monday night.

Calgary is even in points with the San Jose Sharks, but have one more regulation/overtime win.

"He's a dynamic player and he's a very creative player and he sees it," Flames coach Bill Peters said of Gaudreau. "There's not a whole bunch of them that have the ability to slow the game down and buy time for guys to get open and he's got it."

Calgary blew the game open early, jumping out to a 5-0 lead in the first period. Gaudreau became the 10th player in franchise history, and first since Olli Jokinen on Feb. 14, 2011, to register four points in a period.

Gaudreau's handiwork began 2:36 into the game when he set up Tkachuk, who also matched his career best in points. Tkachuk whipped a 20-foot wrist shot past Malcolm Subban for a power-play goal.

Gaudreau made it 2-0 at 6:49, ripping a shot over Subban's glove to complete a tic-tac-to passing sequence with linemates Elias Lindholm and Monahan.

"Smart play by a smart player," said Gaudreau, describing Lindholm's play that began the sequence. "He's 20 to 30 feet ahead of us and he has a one-on-two, pulls up, finds (Monahan), next thing you know it's a two-on-two then I'm coming in the play and it's a three-on-two. For him to have that awareness, he's pretty smart."

Gaudreau pounced on a turnover in the Vegas slot and set up Monahan's one-timer for a 3-0 lead at 10:59, then capped off his record-tying period by setting up Monahan's second of the period and team-leading 12th goal.

"He's a big-time threat to take the puck to the net and then when he pulls up and delays, you've got guys with good timing coming late, that's when you see all those seam passes and East-West passes," Peters said. "All of a sudden, the goaltender is out playing the shooter and it's a long lateral pass and he can't get across."

TJ Brodie and Sam Bennett rounded out the scoring for Calgary (12-8-1), which plays Vegas again on Friday.

Nick Holden and Max Pacioretty scored third-period goals for the Golden Knights, who were coming off a 6-3 win in Edmonton on Sunday

"It's hard to believe that this happened tonight, the way we played last night but that's hockey," Vegas coach Gerard Gallant said. "It's pretty disappointing and I hope they're disappointed because they didn't show up."

For the Flames, who lead the league with six third-period comebacks, Monahan says it was nice to play from in front for a change.

"It's fun, obviously, when you're putting the puck in the net and you're winning like that. That's the best part of hockey," said Monahan. "This is a team, I think we needed a win like that."

Second-year Czech goaltender David Rittich made 20 saves to improve to 7-1-0. It was the second start in a row for the 26-year-old Rittich, who is getting more playing time with veteran Mike Smith struggling.

Subban went the distance for Vegas, finishing with 25 stops. After going 13-4-2 as a rookie last season, Subban has lost all four starts this season.

"I don't have any answers for you right now, but we're supposed to be a fast team and it's probably the slowest we played all year," Vegas winger Reilly Smith said.

NOTES: Flames RW James Neal has gone without a point in his last seven games and is stuck at 499 career points. He has just four points (one goal, three assists) in 21 games since signing a five-year, $28.75 million contract in the summer.