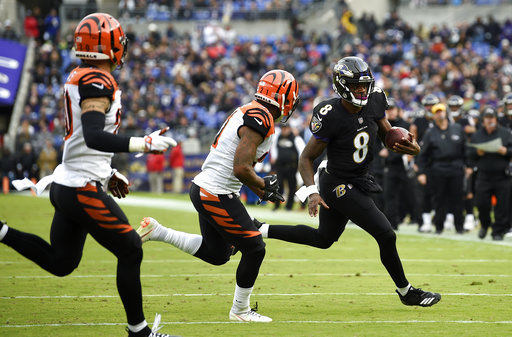 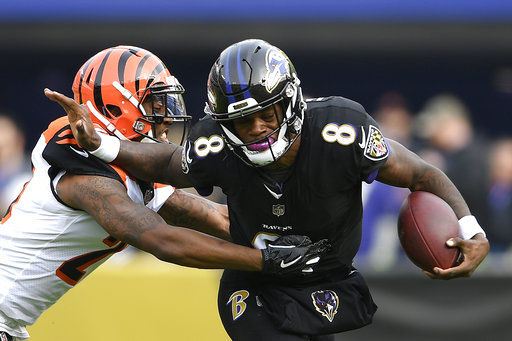 Baltimore Ravens quarterback Lamar Jackson (8) tries to break free from Cincinnati Bengals defensive back Darqueze Dennard as he rushes the ball in the first half of an NFL football game, Sunday, Nov. 18, 2018, in Baltimore. (AP Photo/Nick Wass)

Baltimore Ravens quarterback Lamar Jackson (8) tries to break free from Cincinnati Bengals defensive back Darqueze Dennard as he rushes the ball in the first half of an NFL football game, Sunday, Nov. 18, 2018, in Baltimore. (AP Photo/Nick Wass)

That's not a typo.

Filling in for injured quarterback Joe Flacco, Jackson ran for 117 yards in Baltimore's 24-21 victory over Cincinnati on Sunday. The 2016 Heisman Trophy winner had more rushing attempts than any quarterback since 1970 and became the first to gain over 100 yards since Colin Kaepernick had 113 on Nov. 27, 2016.

Calling his own number worked so Ravens coach John Harbaugh let Jackson tuck it and take off all day. But old-school football won't cut it in a pass-crazy league where quarterbacks are posting ridiculous numbers every week. Even Harbaugh realizes Jackson can't run the ball at that pace in the future.

"Yeah, you don't want your quarterback getting hit that much," Harbaugh said Monday. "It's not going to last that way. So, that's pretty self-evident."

Plenty of running quarterbacks have been successful, though taking hits exposes them to more injuries. Michael Vick is the all-time leading rusher among quarterbacks but he missed a bunch of games during his career. Carson Wentz isn't considered a "running QB" but he tore two knee ligaments on a scramble last season and missed the playoffs and Super Bowl.

"Quarterbacks don't run forever in the NFL," Bengals coach Marvin Lewis said after Jackson juked and sprinted his way past his team. "Sooner or later, they get hurt, and they don't run the same."

NOT INTERESTED: After losing quarterback Alex Smith for the rest of the season, the NFC East-leading Redskins signed Mark Sanchez to be Colt McCoy's backup. They also worked out Kellen Clemens, Josh Johnson, T.J. Yates and EJ Manuel.

RUNNING IT UP: Saints coach Sean Payton defended his decision to go for a fourth-and-7 leading by 31 points early in the fourth quarter. Drew Brees threw a 37-yard TD pass to Alvin Kamara with 13:15 left in a 45-7 win over Philadelphia. Eagles safety Malcolm Jenkins, who began his career with the Saints and was beat on the play, wasn't pleased. He raised both of his middle fingers at Payton. But Jenkins spoke to Payton after the game and told a reporter: "I'm a competitor. I love Sean to death. I know what type of guy and coach he is. That was more so personal between me and him."

UNAGGRESSIVE DOUG: Eagles coach Doug Pederson's unconventional style was lauded during the team's run to a Super Bowl victory last season, but he's played it safe more often this year. On the opening possession in Philadelphia's lopsided loss at New Orleans, the Eagles faced a fourth down and less than a yard at the Saints 24. Pederson elected to punt even though his offense needed to try and score and keep Brees and Co. off the field as long as possible.

"That's one I look at that maybe you do something different right," Pederson said in hindsight.

NO CHALLENGE: Broncos coach Vance Joseph decided not to challenge a 2-point conversion to save a timeout and it nearly cost him until Brandon McManus kicked a 34-yard field goal as time expired to beat the Chargers. Joseph chose not to toss the red flag after Case Keenum came up short on a 2-point draw following Phillip Lindsay's touchdown run that put Denver ahead 20-19 with 12 minutes left. He said one of the officials told the quarterback his team should challenge the call because it was so close. But Joseph said his assistants in the booth didn't see it clearly enough to risk losing a timeout.