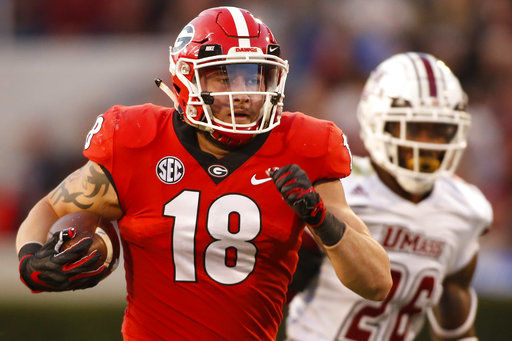 Georgia tight end Isaac Nauta (18) moves the ball down the field during the first half of an NCAA college football game against Massachusetts, Saturday, Nov. 17, 2018, in Athens, Ga. (Joshua L. Jones/Athens Banner-Herald via AP) 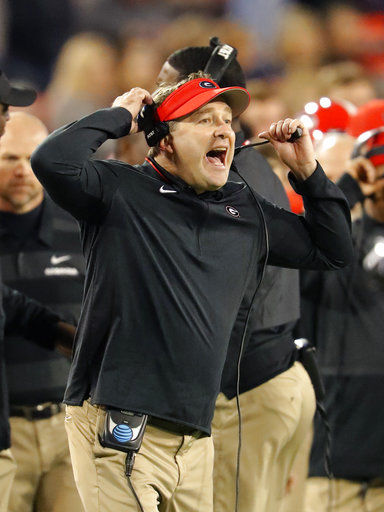 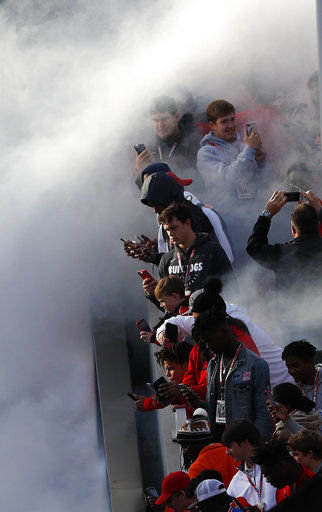 Georgia fans try to take photos through smoke as the Bulldogs run onto the field for the start of an NCAA college football game against Massachusetts Saturday, Nov. 17, 2018, in Athens, Ga. (AP Photo/John Bazemore) 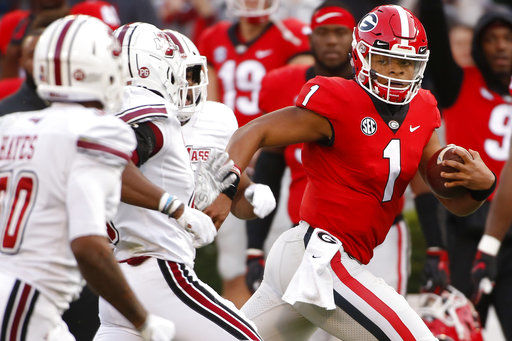 Georgia quarterback Justin Fields (1) looks back during a run against Massachusetts during the first half of an NCAA college football game Saturday, Nov. 17, 2018, in Athens, Ga. (Joshua L. Jones /Athens Banner-Herald via AP) 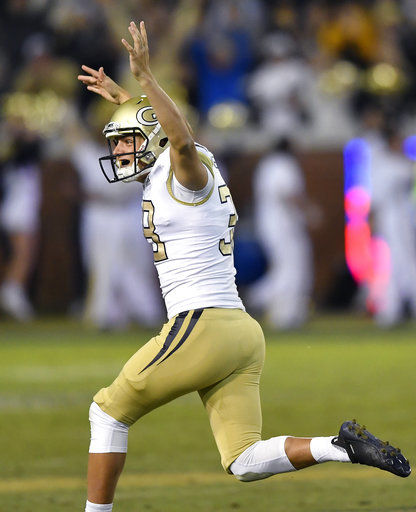 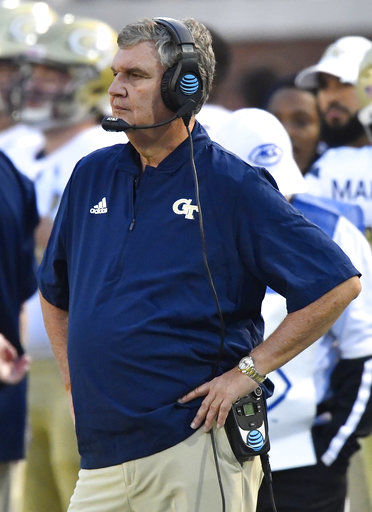 Georgia tight end Isaac Nauta (18) moves the ball down the field during the first half of an NCAA college football game against Massachusetts, Saturday, Nov. 17, 2018, in Athens, Ga. (Joshua L. Jones/Athens Banner-Herald via AP)

Georgia fans try to take photos through smoke as the Bulldogs run onto the field for the start of an NCAA college football game against Massachusetts Saturday, Nov. 17, 2018, in Athens, Ga. (AP Photo/John Bazemore)

Georgia quarterback Justin Fields (1) looks back during a run against Massachusetts during the first half of an NCAA college football game Saturday, Nov. 17, 2018, in Athens, Ga. (Joshua L. Jones /Athens Banner-Herald via AP)

This time around, the Bulldogs have a lot more to worry about than horticulture.

No. 5 Georgia (10-1) is still in the mix for a return trip to the College Football playoffs  assuming it doesn't slip up Saturday against Georgia Tech.

"We know that we have to finish our schedule strong this weekend and the following weekend in order to do what we want to accomplish," tight end Isaac Nauta said. "I feel like we have really been clicking and playing well. We just have to continue going and get a big win this weekend."

The Bulldogs, who also were ranked fifth in last week's CFP standings , have already locked up a spot against top-ranked Alabama in the Southeastern Conference championship game Dec. 1.

That will essentially serve as a play-in game to the playoffs, as long as Georgia still has just one loss on its record.

"We just have to get this game over with and see where we end up," linebacker D'Andre Walker said.

While the Bulldogs have largely dominated the series known as "Clean, Old-Fashioned Hate" since the mid-1960s, winning 40 of the last 54 meetings, the Yellow Jackets have pulled off a few notable surprises in Athens.

In fact, their last four victories over Georgia have been between the hedges, including both 2014 and 2016 (Georgia, in a similar vein, hasn't lost in Atlanta since 1999).

After that game two years ago, the Yellow Jackets commemorated their 28-27 upset by brazenly plucking off branches as souvenirs .

Lots and lots of branches.

Georgia is determined to prevent a repeat.

"I'm excited to win this one and make sure those hedges don't get touched," Nauta said. "We're going to make sure it doesn't happen this year by handling business when they're on the field."

To provide extra motivation, video of the hedge vandals has been playing on a loop in the Bulldogs' weight room, as well as other reminders scattered throughout the training facility.

"I want this, and I know everybody on the team wants this," said Jonathan Ledbetter, a senior defensive end. "We have taken a lot of disrespect from Georgia Tech. I know some people would much rather see us beat Georgia Tech than win a national championship, and we are not going disappoint."

Georgia, of course, has been eyeing another shot at Alabama since last year's national championship game.

The Bulldogs squandered a pair of 13-point leads before losing in overtime, 26-23, when Tua Tagovailoa launched a 41-yard touchdown pass to DeVonta Smith on second-and-26 .

Since the only loss this season, a 36-16 blowout at LSU , Georgia has won four straight games by double-digit margins, including impressive wins over rivals Florida and Auburn as well as an SEC East-clinching victory at Kentucky . This past Saturday, in what amounted to little more than a glorified scrimmage, the Bulldogs piled up 701 yards  the second-highest total in school history  in a 66-27 rout of UMass .

While Georgia opened as a 17-point favorite over the Yellow Jackets, this will surely be a much more challenging game. Georgia Tech (7-4) also has a four-game winning streak and is coming off a thrilling 30-27 overtime victory over Virginia that clinched a winning season, quite a turnaround after a 1-3 start.

Bulldogs coach Kirby Smart called the Jackets "arguably one of the hottest teams in the country as far as what they're doing offensively. They've put four really good games together back to back, scoring a lot of points."

As is always the case for any team preparing to face Georgia Tech, there is plenty of attention on coach Paul Johnson's triple-option offense. The Yellow Jackets lead the nation in rushing yards (353.7 per game) and have largely given up any notion of a passing game, completing just 6 of 15 throws over those last four games.

Asked what his defense needs to be focusing on, Smart said, "You have two or three hours? You can't just define them in a few words."

Smart has also preached the importance of winning at home.

And let's not forget the chance to win a national title, too.