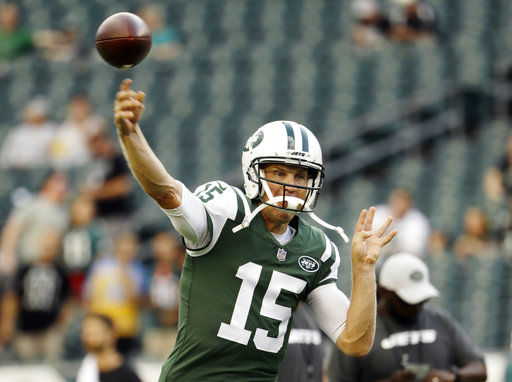 FILE - In this Aug. 30, 2018, file photo, New York Jets' Josh McCown warms up before a preseason NFL football game against the Philadelphia Eagles in Philadelphia. McCown will start at quarterback for the Jets against the Buffalo Bills on Sunday in place of injured rookie Sam Darnold. (AP Photo/Matt Rourke, File) 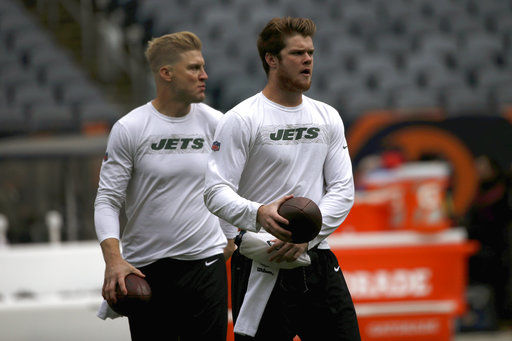 FILE - In this Aug. 30, 2018, file photo, New York Jets' Josh McCown warms up before a preseason NFL football game against the Philadelphia Eagles in Philadelphia. McCown will start at quarterback for the Jets against the Buffalo Bills on Sunday in place of injured rookie Sam Darnold. (AP Photo/Matt Rourke, File)

FLORHAM PARK, N.J. (AP)  Josh McCown is going from mentor to starter this week for the New York Jets.

The 39-year-old quarterback will be under center Sunday against the Buffalo Bills in place of injured rookie Sam Darnold, who's sidelined with a strained right foot.

"I'm ready to rule him out as a starter for this week," coach Todd Bowles said of Darnold on Thursday. "I don't know if I'll rule him out yet for the game."

That means Darnold still could potentially be the No. 2 quarterback on Sunday. If not, Davis Webb would be promoted from the practice squad to serve as McCown's backup.

Either way, the starting job is McCown's  at least for this week.

"I'm extremely comfortable with him," Bowles said. "We talk all the time. He understands the game and the team, and we see things the same way. So I'm comfortable."

McCown has not taken a snap in a regular-season game this season as the Jets have focused on developing Darnold. The No. 3 overall pick won the job out of training camp, but was injured during New York's 13-6 loss at Miami last Sunday.

McCown was the Jets' starter last season and had a career year before being sidelined the last three games with a broken left hand. Since the summer, McCown has spoken highly of Darnold and expressed excitement about being able to have a hand in the youngster's development.

Darnold has received lots of advice and tips from McCown on the sideline and practice field. Now, he'll have no choice but to watch.

"I say it all the time: That's why we do this, to play," McCown said Wednesday when Darnold's injury was announced. "If that's the case, you're torn because your friend and a teammate, it means he can't go. In that regard, I don't wish that on anybody, but at the same time as a professional, as a backup quarterback you have to serve your team in that role and go in and play winning football.

"That's what's fun, that's what you look forward to and that's why you play this game. And, we'll go out and compete."

The Jets are ranked 29th in overall offense, including 28th in the passing game. Some of the struggles can be attributed to the inexperience of Darnold, who has an NFL-leading 14 interceptions. During New York's current three-game losing streak, the rookie has thrown two touchdown passes and seven INTs.

So, some might consider the injury a blessing in disguise. It allows Darnold to take a breather and give McCown a chance to perhaps get the offense back on track.

"Obviously, Josh has played a long time in this league," wide receiver Jermaine Kearse said. "So throughout the weeks, he sees things a lot quicker. Just the mental aspects, he's a lot further, just with his experience and being in the league. So, him just being able to see things a lot quicker, you know, the tempo kind of picked up a little bit."

Bowles made it clear, however, that this is no long-term solution. When Darnold is healthy, he'll step right back into the starting role.

Even if McCown is playing well when Darnold is fully healthy?

"Sam is our quarterback," Bowles answered.

Bowles was then asked why that would automatically be the case with Darnold.

While Darnold is the easy target and he has shouldered the blame for the struggles on offense, the Jets have several other culprits. Center Spencer Long has dealt with a finger injury that has led to several wayward snaps out of the shotgun, disrupting the timing of plays. Wide receivers Quincy Enunwa and Robby Anderson have been dealing with ankle injuries, and there have been blown plays and dropped passes by several players.

Offensive coordinator Jeremy Bates has taken some heat, as well. The Jets are 18th in points with 198 and have scored just 17 touchdowns on offense. They also rank 30th in the league in first-down success (15.8 percent) and third-down conversions (30.8 percent).

NOTES: CB Trumaine Johnson was a full participant at practice for the first time in more than a month after being sidelined with an injured right quadriceps. He's planning to play Sunday. "Man, it's been a month and a couple days, so I'm definitely ready," he said. "Just sitting out there supporting the team and my teammates is a different feeling, but I'm anxious to get back out there." ... Long (knee/finger), Anderson (ankle), Enunwa (ankle), TE Neal Sterling (concussion) and NT Steve McLendon (ankle) didn't practice. ... LG James Carpenter (shoulder) was limited.