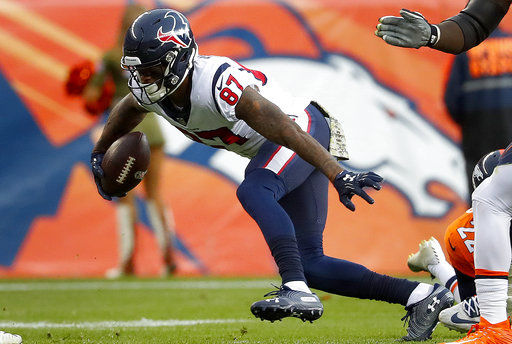 Houston Texans wide receiver Demaryius Thomas (87) runs after the catch during the first half of an NFL football game against the Denver Broncos, Sunday, Nov. 4, 2018, in Denver. (AP Photo/Jack Dempsey) 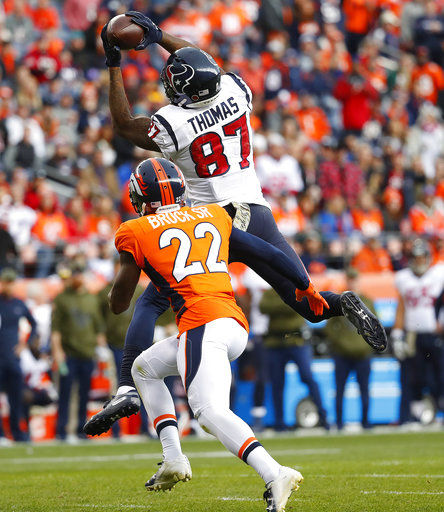 Houston Texans wide receiver Demaryius Thomas (87) runs after the catch during the first half of an NFL football game against the Denver Broncos, Sunday, Nov. 4, 2018, in Denver. (AP Photo/Jack Dempsey)

Thomas said in a radio interview Monday, a day after his successful homecoming in a 19-17 Texans win in Denver, that he was misled by the Broncos about the possibility of a trade, was asked to surrender snaps to the team's rookie receivers and was heartbroken over not being named a captain this year.

Joseph said Wednesday he had "great respect for D.T.," was "disappointed with how he recalls the conversations going," and "we've got to move on."

"He's got to move on. We've got to move on," Joseph said. "He's no longer a Bronco and I can't spend any time worrying about that. But as far as reading that stuff, I'm disappointed it was presented that way, I really am."

Thomas aired his frustrations during an interview with former Broncos Rod Smith and Ray Crockett on Orange & Blue 760-AM in Denver, a Broncos broadcast partner.

Thomas said the day before he was traded, Joseph told him the trade talk wasn't true.

"I said, 'How is that not true? My agent called me today and said (general manager John) Elway wanted a fifth-round pick for me.' So, are we telling stories to each other now? I thought we were going to be men about this," Thomas said.

In his first comments about Thomas' criticisms, Joseph said, "I'm disappointed with how he recalls the conversations going."

Thomas also complained in the interview that he wasn't named a captain this year, something he'd been three times before, and suggested there were some shenanigans in the vote counting: "I go to a meeting room and it's like every player came to me and were like, 'How are you not a captain? We picked you.' ... It was heartbreaking."

Thomas also said in his interview that new wide receivers coach Zach Azzanni told him he'd have to surrender playing time so the Broncos could give more snaps to rookie receivers Courtland Sutton and DaeSean Hamilton. He also said he was the only veteran receiver who was told this.

Thomas added, "I don't understand that because I've never cried about getting the ball. I didn't get (upset) about nothing ... it just hurt me. I'm emotional. I'm empty. I'm empty still."

Thomas caught three passes for 61 yards in the Texans' win Sunday in Denver, where the Broncos honored their former receiver with a video tribute before the game and by putting a giant "Thank you" on the 10-story-high banner of Thomas outside their stadium.

"We have great respect for D.T.," Joseph said. "He was a great player here and we honored him on Sunday. We didn't win the game; he won the game. I think it's a little frustration on his part, but I'm disappointed in how it came out because I don't recall it being discussed that way. And that's OK. The last point: we've got to move on."

Notes: Paradis underwent surgery Wednesday to repair his right leg, which he broke Sunday. ... The players were given a four-day furlough for their bye week after an indoor practice Wednesday.