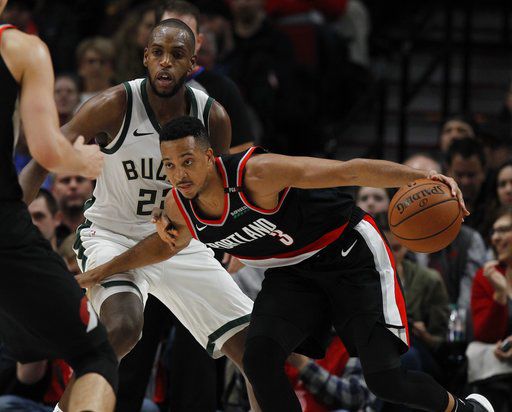 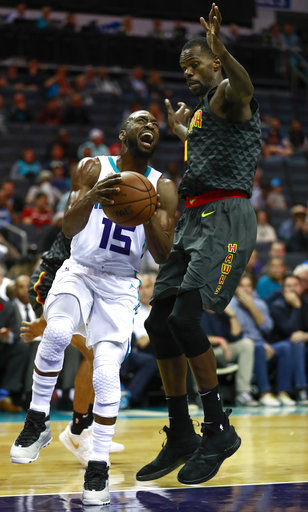 McCollum, who entered shooting well below his career averages, went 17 for 26 from the field and added six assists. Evan Turner had 16 points and 11 rebounds off the bench for the Blazers (8-3).

Giannis Antetokounmpo led Milwaukee with 23 points and nine rebounds. Brook Lopez shot 6 for 10 from 3-point range and finished with 22 points.

In the third quarter, McCollum put on a show. He scored 19 points and made Bucks rookie guard Donte DiVincenzo fall down on a crossover move before hitting a basket, sending the crowd into a frenzy.

Marvin Williams added 20 points for the Hornets (6-5), who won for the third time on a four-game homestand. Walker has scored 25 or more seven times in 11 games.

Jeremy Lamb and Malik Monk each had 13 points for Charlotte. Nic Batum scored 10.

Playing against his former team, Jeremy Lin had 19 points off the bench to lead the Hawks (3-7), who led by seven late in the first half.

It was the Mavericks' 16th win in their last 17 meetings with the Wizards. Wesley Matthews added 22 points for Dallas, and Harrison Barnes had 19 points and 13 rebounds.

John Wall led the Wizards with 24 points. Otto Porter Jr. and Bradley Beal had 19 each, but Beal was 1 for 9 on 3-point attempts.

Washington trailed by 24 in the first half and 21 at halftime, but forced 11 Dallas turnovers in the second half and climbed back into the game behind its top three players.

The Wizards were within six when Smith scooted past Dwight Howard to grab an offensive rebound and fed a cutting DeAndre Jordan for a dunk that put the Mavs up 101-93 with 5:33 left.(backslash)

The Nets won their third game in the past four, while the Suns have lost eight of nine.

Devin Booker led Phoenix with 20 points but made just 6 of 21 shots. Deandre Ayton had 15 points and a season-high 13 rebounds.

Brooklyn held the Suns to a season low in points and field goal shooting at 34.6 percent.