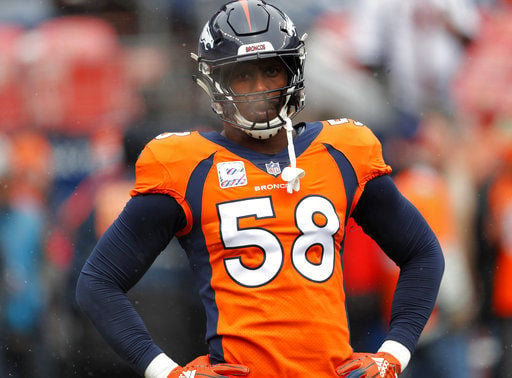 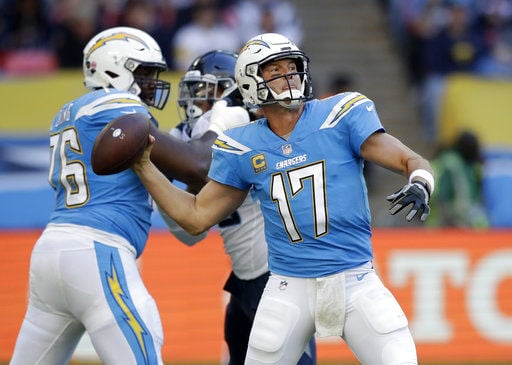 ENGLEWOOD, Colo. (AP)  Try as he might, Von Miller just can't find anything bad to say about Philip Rivers anymore.

That's when the Broncos' star pass rusher got to know the Chargers' star quarterback at the Pro Bowl.

"When we kicked it at the Pro Bowl, I was just blown away about what type of guy he was on and off the football field," Miller said. "And I got a lot of respect for him."

Miller said that if Rivers were surrounded by the talent the likes of which Tom Brady, Eli Manning and Ben Roethlisberger have enjoyed throughout their careers, "he'd have multiple Super Bowls just like those guys."

Miller and Rivers face each other for the 15th time Sunday when the reeling Broncos (3-6), losers of six of their last seven, face the red-hot Chargers (7-2), who have won six in a row.

Miller said the only reason he used to despise Rivers was the uniform he wears.

"I just didn't like him because he played for the Chargers," Miller said.

It wasn't so hard for him to come around to liking the guy, however.

"You ride on the bus at the Pro Bowl and in the locker room you're just around the guys and you're like, 'Man, this guy's cool. I like this guy.' He's a great father. He's a great leader for the Chargers," Miller said. "I know some guys over there in Melvin Ingram and Melvin Gordon and they say the same thing about him.

"Everybody loves him. I've got a lot of respect for him and this game's going to be a good one."

Miller said so many other defenders are bothered by Rivers because of his talent and renowned trash talk.

Miller has sacked Rivers 15 times , by far the most of any quarterback he's ever faced and almost twice as many times as No. 2 on the list, Alex Smith, with eight.

Combined, they have 17 sacks so far.

"Those are two really good rushers, really good football players," Rivers said. "I think Von plays the heck out of the run. So does Chubb."

He's getting the ball out quicker than ever, the Chargers' ground game is the best it's been in years and L.A.'s O-line is playing exceptionally well, all reasons Rivers has only been sacked a dozen times so far.

"It's the best Chargers team that I have played in my career," said Miller, an eighth-year pro.

"I don't really have any enemies at quarterback," Miller said. "Now, offensive linemen, it's different. But you know quarterbacks, whenever I get close to them they fall or they run away. Those are the type of pants I like to wear.

And pretty good at buttering them up, too.