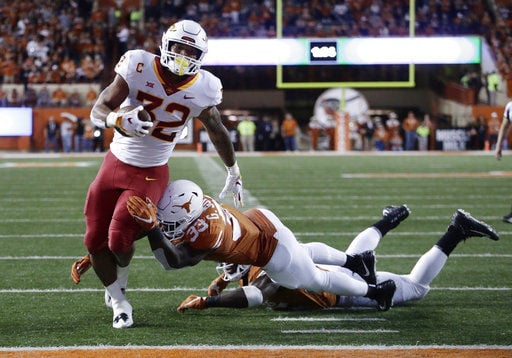 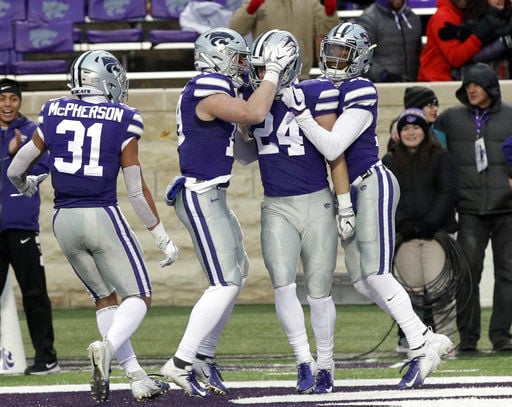 Kansas State defensive back Brock Monty (24) is congratulated by teammates after blocking a punt during the second half of an NCAA college football game against Texas Tech in Manhattan, Kan., Saturday, Nov. 17, 2018. (AP Photo/Orlin Wagner)

Kansas State defensive back Brock Monty (24) is congratulated by teammates after blocking a punt during the second half of an NCAA college football game against Texas Tech in Manhattan, Kan., Saturday, Nov. 17, 2018. (AP Photo/Orlin Wagner)

AMES, Iowa (AP)  Iowa State knocked itself out of the Big 12 title game chase with a dispiriting loss last week at Texas.

The No. 25 Cyclones now look to bounce back by ending a surprisingly long losing skid against Kansas State  and finish with its best record in the Big 12.

But this season the Cyclones are a two-touchdown favorite over the program that's vexed them like none other in the conference.

"I think we have earned the right to be the underdog because we haven't played well throughout the course of the year," Kansas State coach Bill Snyder said. "I think everybody in the program responds different. For some, it is motivational; for others, they could care less."

Some storylines for Iowa State vs. Kansas State in their Big 12 finale.

Iowa State had won five straight games  a first in the Big 12 for the Cyclones  behind the sensational play of freshman Brock Purdy. But Texas brought Purdy back to earth in a 24-10 loss, as he completed just 10 of 23 passes for 130 yards and a pick while getting sacked five times. Still, Iowa State coach Matt Campbell is confident Purdy can bounce back. "A young man that I've got a lot of admiration for," Campbell said. "We've put a lot on his plate at a really young age and his ability to respond to what he's done, it's been really impressive."

The Wildcats' defense is peaking after allowing just six points in last week's win over Texas Tech. The Red Raiders, who had been averaging nearly 42 points a game, gained less than 200 yards for the first time in eight years. "Sometimes you get to this part of the year and teams are still trying to find themselves," Campbell said. "They get to this time of year (and) they certainly know who they are and know what their recipe for success looks like." The Wildcats have held each of their last three opponents to 17 points or less after Oklahoma lit them up for 51 in late October.

The Cyclones lead the Big 12 in scoring defense at 20.8 per game, and they're holding opponents 12 points below their average output. That could be bad news for a Kansas State attack that is last in the league  especially since Snyder was noncommittal on Tuesday when asked about the health of quarterbacks Alex Delton and Skylar Thompson. "Schematically, they are very sound. They do not take a lot of chances," Snyder said of Iowa State.

This is the latest that Iowa State has been ranked since it was 14th on Nov. 20 of 1976. ...Kansas State has been bowl eligible for eight years in a row. ...Running back David Montgomery is tied for 10th in school history with 20 rushing TDs. ...Nine of K-State's victories over the past 10 years have been by eight points or less.

"I have always said the same thing. if I was not wanted and didn't feel like I was having an impact on the lives of young people and my family wasn't interested in me continuing, then I certainly wouldn't," Snyder said when asked about his future.