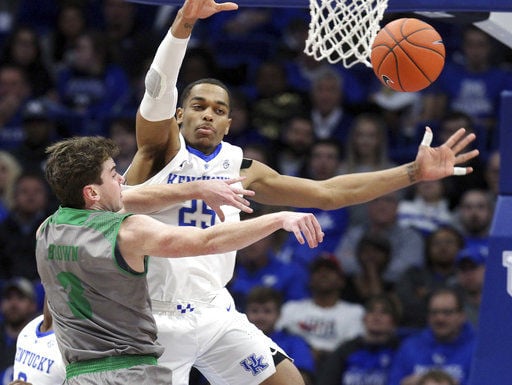 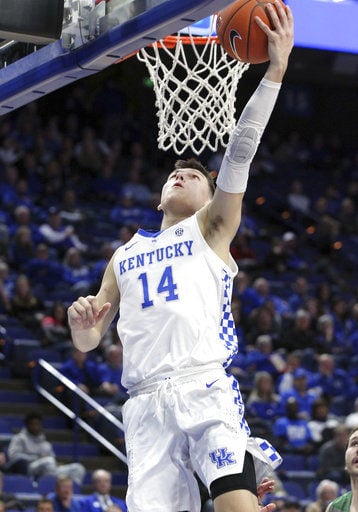 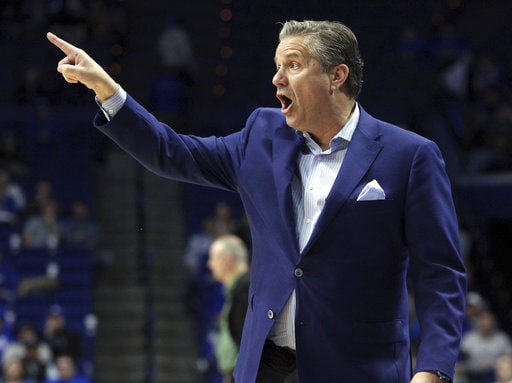 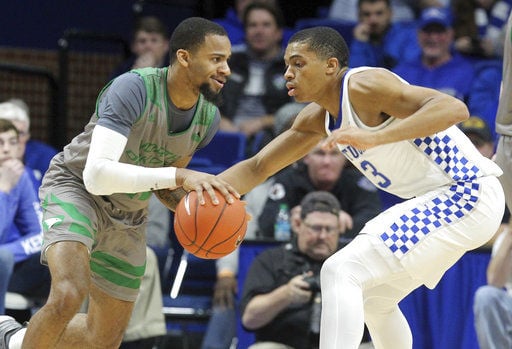 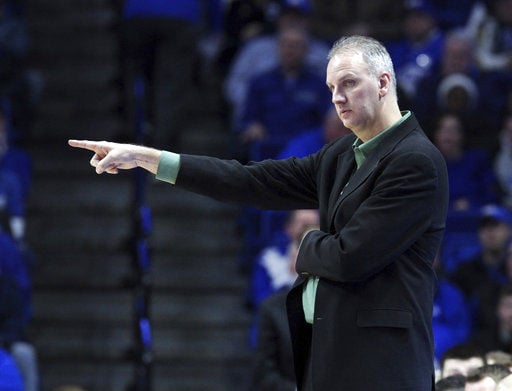 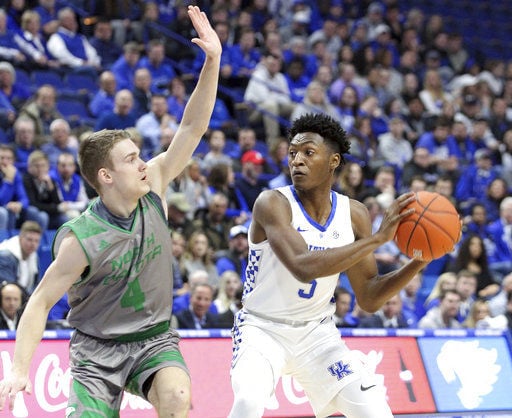 Kentucky's Immanuel Quickley, right, looks for a teammate while defended by North Dakota's Davids Atelbauers (4) during the first half of an NCAA college basketball game in Lexington, Ky., Wednesday, Nov. 14, 2018. (AP Photo/James Crisp) 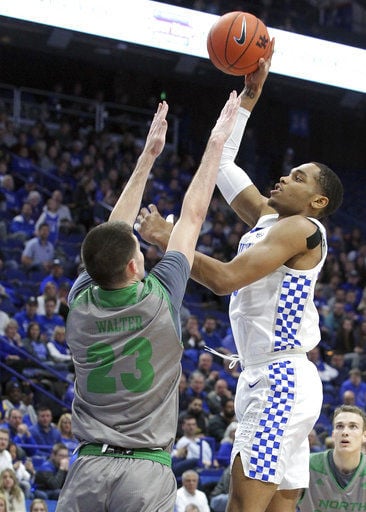 Kentucky's Immanuel Quickley, right, looks for a teammate while defended by North Dakota's Davids Atelbauers (4) during the first half of an NCAA college basketball game in Lexington, Ky., Wednesday, Nov. 14, 2018. (AP Photo/James Crisp)

LEXINGTON, Ky. (AP)  As No. 10 Kentucky works through initial growing pains, it can feel good about its first lopsided win this season.

The Wildcats (2-1) finally got the dominant effort they sought after a rough first week in which Duke beat them by 34 points before they scraped by Southern Illinois. They had to shake off an initial back-and-forth with the Fighting Hawks (2-1), who led 13-12 before Washington's 3-pointer put Kentucky ahead to stay. The Wildcats outscored North Dakota 27-7 over 9:46 for a 39-20 cushion and led by 38 in the closing minutes.

That initial basket was big for Washington, Kentucky's top returning scorer who managed just 11 points through two games. He went on to post a season-high 10 points by halftime before scoring 15 more after the break. He finished 9 of 13 from the field, including a career-best 4 of 5 from behind the arc to surpass his previous best of 22 points against Mississippi State in January.

"I just tried to be solid and try to get rebounds, get out and try to create for everybody," Washington said. "Once I saw a couple go in, it opened up for me."

Herro was just as relieved to regroup from a scoreless performance against SIU.

He went 7 of 12 with a 3-pointer to top his 14-point debut against Duke, and Kentucky shot 53 percent in the opening game of the Ohio Valley Hardwood Showcase. The Wildcats scored 31 points off 20 turnovers with 12 steals, including a career-high five by Herro.

"It was just how we practiced," the freshman guard said. "After the Southern Illinois game we were focused all week on playing hard defensively and I think that just carried over to the game."

Keldon Johnson had 12 points and 10 rebounds for Kentucky's first double-double this season. Immanuel Quickley also scored 10 for the Wildcats.

Conner Avants had 14 points and Filip Rebraca 13 for North Dakota (2-1), which shot 40 percent in its first meeting with the Wildcats.

Kentucky's convincing performance, perhaps overdue, should help seal another week in the top 10  provided the Wildcats take care of VMI this weekend.

North Dakota: Perimeter shooting helped the Fighting Hawks make things interesting early against the Wildcats. That strong start lasted just six minutes as they were thoroughly overwhelmed in their first meeting against a Southeastern Conference school. They finished 7 of 19 from 3-point range but their rebounding total was four fewer than Kentucky grabbed alone offensively.

"We got out of the gates well," coach Brian Jones said, "but as the first half wore on we weren't able to take care of the basketball and that allowed them to get a little bit of separation. ... When they can rebound and run and turn you over and run, they're pretty hard to beat."

Kentucky: The Wildcats looked much better than in Friday's shaky escape against Southern Illinois. Besides shooting a season best from the field, they controlled the paint (46-18) and owned the glass 45-15. Though they were far from perfect, coach John Calipari was happy to see his team disrupt an opponent for a change.

"We still had some breakdowns and there were a couple of plays where we got scored on," he said. "But I liked the fact that we turned somebody over finally."

Kentucky hosts VMI on Sunday in the second game of the Hardwood Showcase, which also features Winthrop and Tennessee State.

A previous version of this story incorrectly indicated Washington's seven rebounds were a career high. They were only a season high.