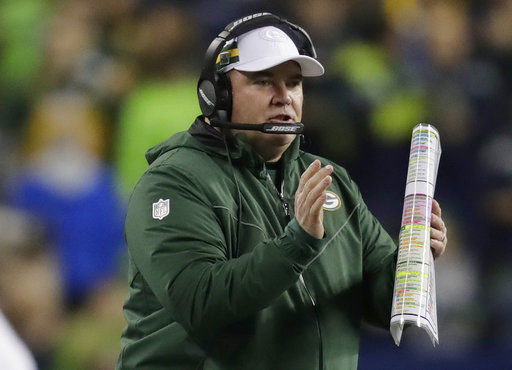 Green Bay Packers coach Mike McCarthy calls to his team during the first half of an NFL football game against the Seattle Seahawks, Thursday, Nov. 15, 2018, in Seattle. (AP Photo/Stephen Brashear) 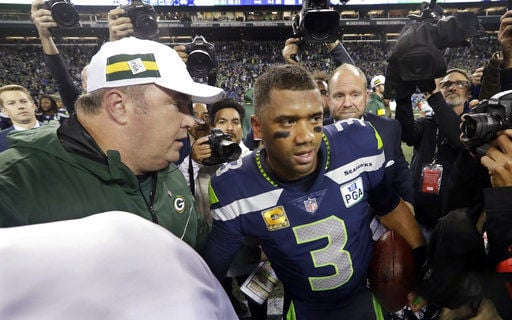 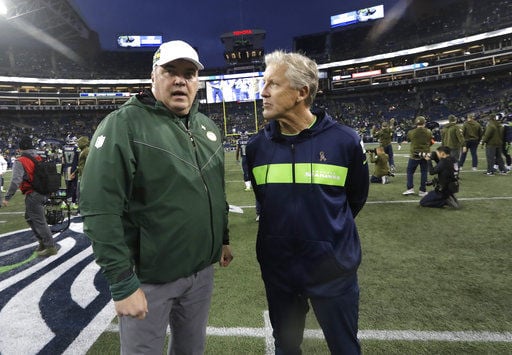 Green Bay Packers coach Mike McCarthy calls to his team during the first half of an NFL football game against the Seattle Seahawks, Thursday, Nov. 15, 2018, in Seattle. (AP Photo/Stephen Brashear)

GREEN BAY, Wis. (AP)  Mike McCarthy knows his job is on the line.

The Green Bay Packers' 13th-year head coach acknowledged he is aware that the team's 4-5-1 record has led to questions about his future.

But he insisted he and the team are focused on next week's pivotal NFC North matchup with the Vikings in Minnesota, and not the uncertainty surrounding his job security.

"That's the job. That's the way this business has gone," McCarthy said Friday. "We set a standard here the past 12 years, and it's our responsibility to play to that standard. That's the way we approach it."

The 27-24 loss in Seattle on Thursday left the Packers 0-5 on the road and third in the division behind the Chicago Bears (6-3) and the Vikings (5-3-1). A seemingly softer portion of the schedule follows next week's showdown with Minnesota, but a loss in that game could put the Packers in a hole too deep to climb out of.

McCarthy has had teams rally late in seasons past, including in 2016, when quarterback Aaron Rodgers famously said the team could "run the table" over the final six weeks. After starting 4-6, the Packers won eight straight games to win the NFC North and advance to conference title game, in which they fell to the Atlanta Falcons.

That was Green Bay's fourth NFC championship game under McCarthy, who led the 2010 team to the Super Bowl title. His Packers made the playoffs in eight consecutive seasons before missing the postseason last year, when Rodgers missed nine-plus games with a broken right collarbone.

"I have great confidence. I've been in this position before, so I have confidence in how we do things," McCarthy said. "You have to react  there's no doubt about that  but you can't overreact. So, you've just got to stay in tune with the specifics and the details of why we're not getting it done in those situations."

The Packers have lost three of their last four games, despite being in position in the fourth quarter to win on the road against the Rams, Patriots and Seahawks.

"We're not going to turn on each other or nothing. We love each other and we stick together as a team," defensive back Tramon Williams said. "Is it frustrating? Yes, it's very frustrating to come out on these types of losses when you know you should be winning these games."

Against the Seahawks, the Packers had a 21-20 lead with 9 minutes left and were facing third-and-5 at Seattle's 12-yard line when Rodgers was sacked, forcing them to settle for a field goal to make it 24-20.

Seattle responded with a 75-yard touchdown drive. When Rodgers missed an easy third-down throw on the ensuing possession, McCarthy opted to punt on fourth-and-2 with 4:20 to go. Green Bay never got the ball back.

"It's tough losing on the road. It's tough losing by one possession. Obviously, I'm frustrated, not just by the last throw but some other stuff that we could've done better out there," Rodgers said. "This is an important, obviously, six-game stretch left. I still believe we have a lot to play for."

McCarthy said Friday that he still felt it was a "solid decision" to punt in that situation, and that his decision not to challenge a 34-yard Russell Wilson-to-Tyler Lockett completion that set up the go-ahead touchdown was based on not having a clear replay to look at in the coaches' booth. But he acknowledged both calls were open to second-guessing.

"Frankly, those are the kind of decisions that keep all of us up," McCarthy said. "Now that I'm standing here and I know what the result is of them running out the clock, you go, 'Oh, yeah, I wish I would've went for it on fourth-and-2.'"

"My first reaction was to go for it," he added. "But we talked it over game management-wise and that's the decision I made."