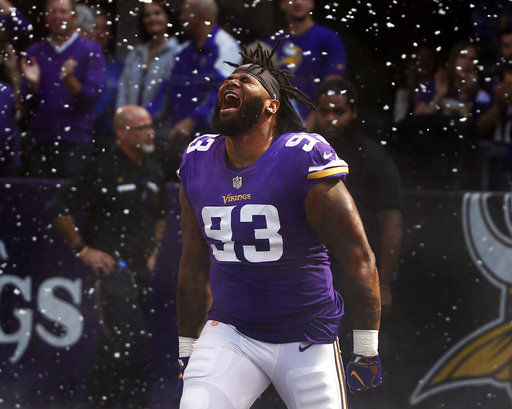 FILE - In this Sept. 23,2018, file photo, Minnesota Vikings defensive tackle Sheldon Richardson runs onto the field before an NFL football game against the Buffalo Bills in Minneapolis. Minnesota's big splash of the offseason was the addition of quarterback Kirk Cousins, but the value of signing defensive tackle Sheldon Richardson as a free agent can't be overlooked. He's fourth among NFL interior defensive linemen in quarterback pressures. (AP Photo/Bruce Kluckhohn, File) 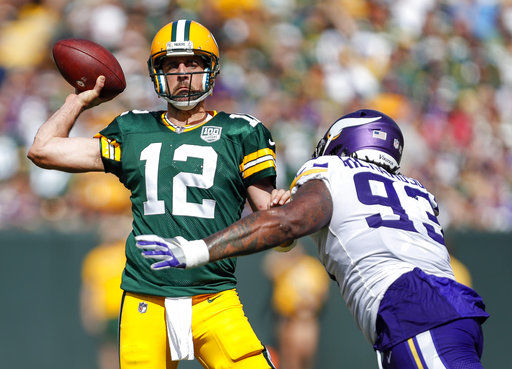 FILE - In this Sept. 23,2018, file photo, Minnesota Vikings defensive tackle Sheldon Richardson runs onto the field before an NFL football game against the Buffalo Bills in Minneapolis. Minnesota's big splash of the offseason was the addition of quarterback Kirk Cousins, but the value of signing defensive tackle Sheldon Richardson as a free agent can't be overlooked. He's fourth among NFL interior defensive linemen in quarterback pressures. (AP Photo/Bruce Kluckhohn, File)

EAGAN, Minn. (AP)  The Minnesota Vikings had just secured their new quarterback with the splash move of the NFL's offseason. Coach Mike Zimmer was busy working on addressing another area that needed an upgrade.

The same day Kirk Cousins was introduced with his $84 million fully guaranteed contract, Zimmer was watching video of some of the top defensive tackle prospects in the upcoming draft. Then the solution literally walked into his office to greet him. Sheldon Richardson was at team headquarters on a free agent visit, which the Vikings didn't let him leave without signing him to a one-year, $8 million deal .

As important as Cousins has been and will continue to be, the value of adding Richardson can't be overlooked. His presence on the interior at the position next to the nose tackle commonly called the "three technique" has provided a critical boost to the defense in both stopping the run and rushing the quarterback.

"Sheldon's done a great job of coming in here and kind of fitting into our culture and the way we do things," Zimmer said, crediting Richardson as well as defensive line coach Andre Patterson.

According to SportRadar, Richardson is fourth among all NFL interior defensive linemen with 21 quarterback pressures, behind Aaron Donald (53), Fletcher Cox (26) and Geno Atkins (25). Richardson had two sacks last week against Green Bay, a bonus from a position where disruption in the backfield is the priority.

The three technique is a less-heralded role on the team than the premier edge pass rusher or the ball-hawking safety. But it's essential to Zimmer's scheme to keep the linebackers free to roam from side to side, limit the rushing yardage up the middle, and reduce double teams on the defensive ends. The Vikings seek first-step and lateral quickness from their three technique, which gets its name from a long-ago-established numbering system for designating alignments by defensive linemen.

"He does those things really well, but the thing that kind of surprised me a little bit is the power that he has with it," Zimmer said. "The good three techniques I have been around have all kind of had those qualities."

Richardson, a first-round draft pick by the New York Jets in 2013 out of Missouri, was the AP Defensive Rookie of the Year before eventually falling out of favor and being traded to Seattle. After one season with the Seahawks, Richardson was widely considered the best available player at his position on the market last spring. His decision to sign with a contending team on a prove-it contract has set him up well for a much bigger payday.

"It's a blue-collar organization," said Richardson, who turned 28 on Thursday. "One of the main reasons why I like the organization is nobody is a prized possession here. No politics. They don't play their draft picks sometimes. You can pay a guy a lot of money, but he won't play if he's not up to par."

The Vikings play at New England on Sunday, with pressure on Tom Brady a must for slowing down the Patriots and their prolific attack. The defense has been especially successful lately at generating a rush from the front four without having to send an extra blitzer or two from the linebackers or defensive backs.

"That's how we want it, too," Richardson said. "We're happy when they get it, but it's like, 'Man, that could've been us.' Usually when those guys get sacks, we turn into offensive linemen basically."

The Patriots have plenty of experience defending him, of course, from the eight times they faced the Jets over his first four seasons.

"He's a great player, and he was certainly a problem when he was in this division," coach Bill Belichick said, adding: "He's strong. He's hard to knock off the ball. He's smart. He reads blocking schemes well. He's quick and athletic and explosive on the pass rush, and he can run through guys and he can run around them."