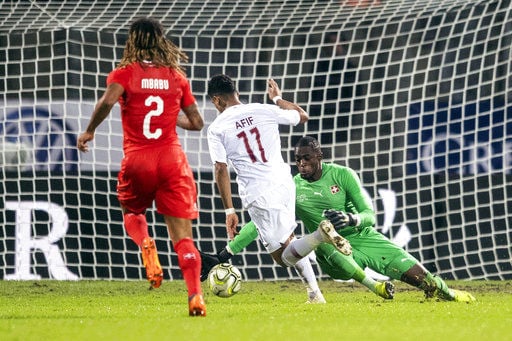 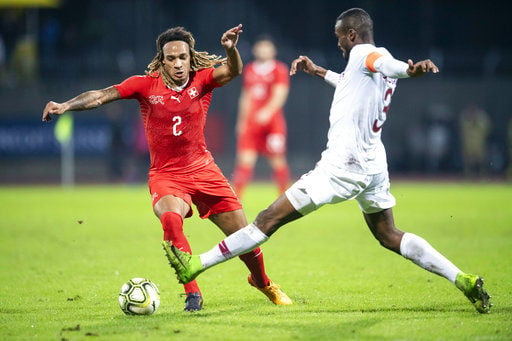 Switzerland's Kevin Mbabu, left, is challenged by Qatar's Abdelkarim Hassan during an international friendly soccer match between Switzerland and Qatar at the Cornaredo stadium in Lugano, Switzerland, Wednesday, Nov. 14, 2018. (Ennio Leanza/Keystone via AP) 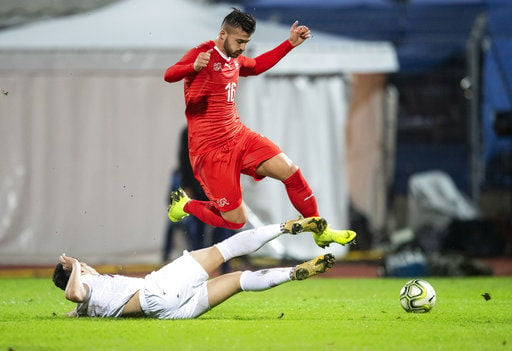 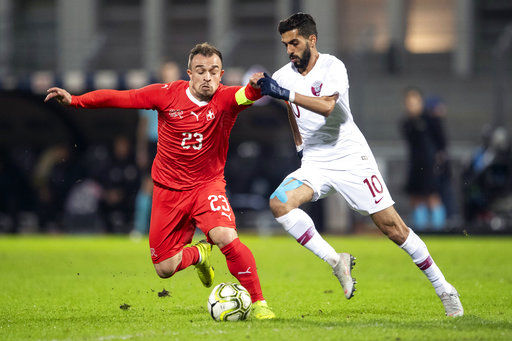 Switzerland's Kevin Mbabu, left, is challenged by Qatar's Abdelkarim Hassan during an international friendly soccer match between Switzerland and Qatar at the Cornaredo stadium in Lugano, Switzerland, Wednesday, Nov. 14, 2018. (Ennio Leanza/Keystone via AP)

Afif scored on a breakaway with four minutes remaining to send an early message that 96th-ranked Qatar may be catching up to the more established soccer powers four years before it plays in its first World Cup.

After Qatar won possession near the halfway line, Afif ran onto a throughball and rounded goalkeeper Yvon Mvogo before shooting into an empty net.

"We hope this game gives our players the confidence that we can play against top teams and to keep working hard," Qatar coach Felix Sanchez said. "I'm sure in Qatar people are very proud of our players today and they're going to give us more hope to prepare the Asian Cup."

Qatar has another friendly on Monday against Iceland before the Asian Cup in January. It will also play in next year's Copa America in Brazil as one of the invited guests.

"When you're coaching a team like Qatar and you're facing a top team like we faced today we need to do more things that we are not used to do but that's the way to compete because at the moment Switzerland is No. 8 in the world, we're No. 96. This for a reason," Sanchez said.

Switzerland, which reached the last 16 in this year's World Cup in Russia and had kept nine clean sheets in its past 10 home matches, had wasted a number of chances to put the game away earlier and hit the post twice.

"It's a really awful defeat, it's a match almost to forget. We played really badly," Switzerland midfielder Remo Freuler said. "We have to analyze what we did badly and I don't think we did anything well. ... I don't think we undervalued them but we never got into the match today."

The Swiss came into the game as massive favorites after putting six goals past Panama and Iceland this year, as well as scoring five against Hungary in 2017.

The last time Qatar played a European team it lost 2-1 at home against minnow Liechtenstein last December. Its last win against a European team was a 1-0 victory against Andorra last August. The tiny desert nation was awarded the 2022 World Cup in a disputed FIFA vote in 2010 despite never having qualified for the tournament before.

Afif also drew a save from Mvogo in the 23rd minute, while Switzerland went closest in the 36th when Micahel Lang headed a corner off the inside of the right post.

Afif thought he had given Qatar the lead at the end of the first half but he was offside when Ali flicked the ball on.

Switzerland made wholesale changes at halftime but even the introduction of Liverpool midfielder Xherdan Shaqiri didn't help  although his pass set up Christian Fassnacht for a shot that hit the crossbar.