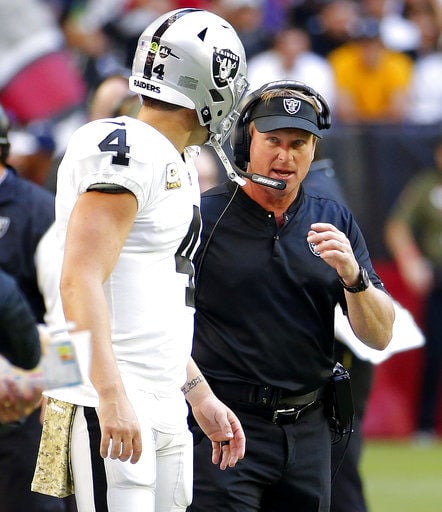 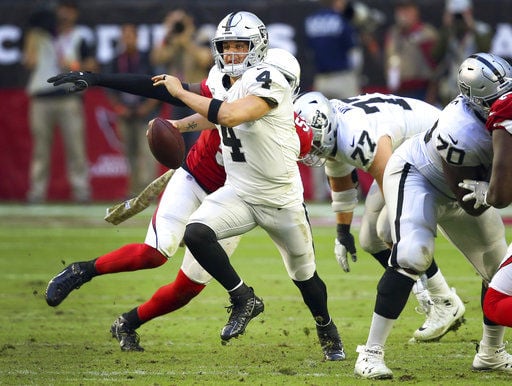 Oakland Raiders quarterback Derek Carr (4) looks to pass under pressure against the Arizona Cardinals during the first half of an NFL football game, Sunday, Nov. 18, 2018, in Glendale, Ariz. (AP Photo/Ross D. Franklin)

Oakland Raiders quarterback Derek Carr (4) looks to pass under pressure against the Arizona Cardinals during the first half of an NFL football game, Sunday, Nov. 18, 2018, in Glendale, Ariz. (AP Photo/Ross D. Franklin)

ALAMEDA, Calif. (AP)  Derek Carr missed Jalen Richard on a third-down pass in the second quarter and immediately heard all about it from coach Jon Gruden as he walked to the Oakland Raiders sideline.

Carr was caught on television yelling right back at his coach in an exchange that repeated itself again in the fourth quarter and prompted many outsiders to point to it as a symbol of how bad things have gotten in this lost season for the Raiders.

To Carr and Gruden, it's just a regular occurrence between two passionate people that just happened to be caught on camera during a 23-21 win for Oakland (2-8) over Arizona on Sunday.

"I don't have a 'no yelling' sign on the sideline," Gruden said Monday. "Things happen. We get excited down there. I get excited when we get a first down. Get excited when you work on something all week and it doesn't work out. I get excited when he makes big plays, too. That's just part of football. I think cameras can catch things sometimes that maybe make things look a little bit peculiar, but that happens."

The first run-in between Carr and Gruden happened late in the second quarter when the Raiders went three-and-out after the missed throw down the sideline to Richard. Tight end Lee Smith ended up trying to play peacemaker, grabbing Gruden at one point in what he later acknowledged was a mistake.

Carr was surprised the whole situation became such a big deal.

"It's not the first time him and I have been that way. We're both very fiery," Carr said Sunday. "A lot of people don't see that in me, right? All the time. We're both very fiery, we're both very competitive. Minor disagreement on something and the beautiful thing is that when we do that, it's never like a demeaning thing, or pointing a finger. It's just, we're both yelling the same kind of thing almost. It's us both saying let's fix it kind of deal. Again, it's not the first time, I doubt it'll be the last time, but everything's good, I promise."

There was only more frustration later in the quarter when Carr called back-to-back timeouts, leading to a delay of game penalty that helped thwart a drive.

The bickering continued in the fourth quarter after a third-down pass to Seth Roberts came a yard short of a first down, leading to another punt.

Gruden said he can be outwardly supportive or critical depending on the situation.

"I'm a big cheerleader sometimes," he said. "I'm very positive a lot of the time. Every once in a while, I think you have to make your points in some different ways. Sometimes raising your voice. I look ridiculous to some people, but I want urgency. I want to have some urgency to get things right. It doesn't mean I'm always right, either. Derek pointed that out to me yesterday. So be it."

The Cardinals then took the lead on the ensuing drive and the Raiders failed to generate a first down on two straight possessions, leading to rare punts in the final four minutes by a trailing team.

But thanks to some poor penalties by Arizona and botched clock management, the Raiders got one last chance and made it pay off by driving 63 yards in the final 1:53 thanks to a 32-yard pass to rookie Marcell Ateman and a 20-yarder to Roberts that set up Daniel Carlson's game-winning 35-yard kick.

NOTES: The Raiders placed WR Brandon LaFell (Achilles) on IR and signed WR Keon Hatcher off Green Bay's practice squad. Hatcher had three TD catches for Oakland in the preseason finale. ... WR Saeed Blacknall was released Monday. ... WR Jordy Nelson could return to practice this week after missing a game with a knee injury. ... RB Doug Martin should be OK this week after missing the second half with an ankle injury.